Meet the Expert day at Dundee Science Centre, 10 September 2016, part of The Crunch series of public events on sustainable agriculture and food, showcased two of our topics – Roots of Nutrition and Grain to Plate.

It was hands-on for the younger visitors – they donned lab coats, peered into test tubes, felt grain and rolled dough.  The not quite so young shared experiences on topical issues of food and health. 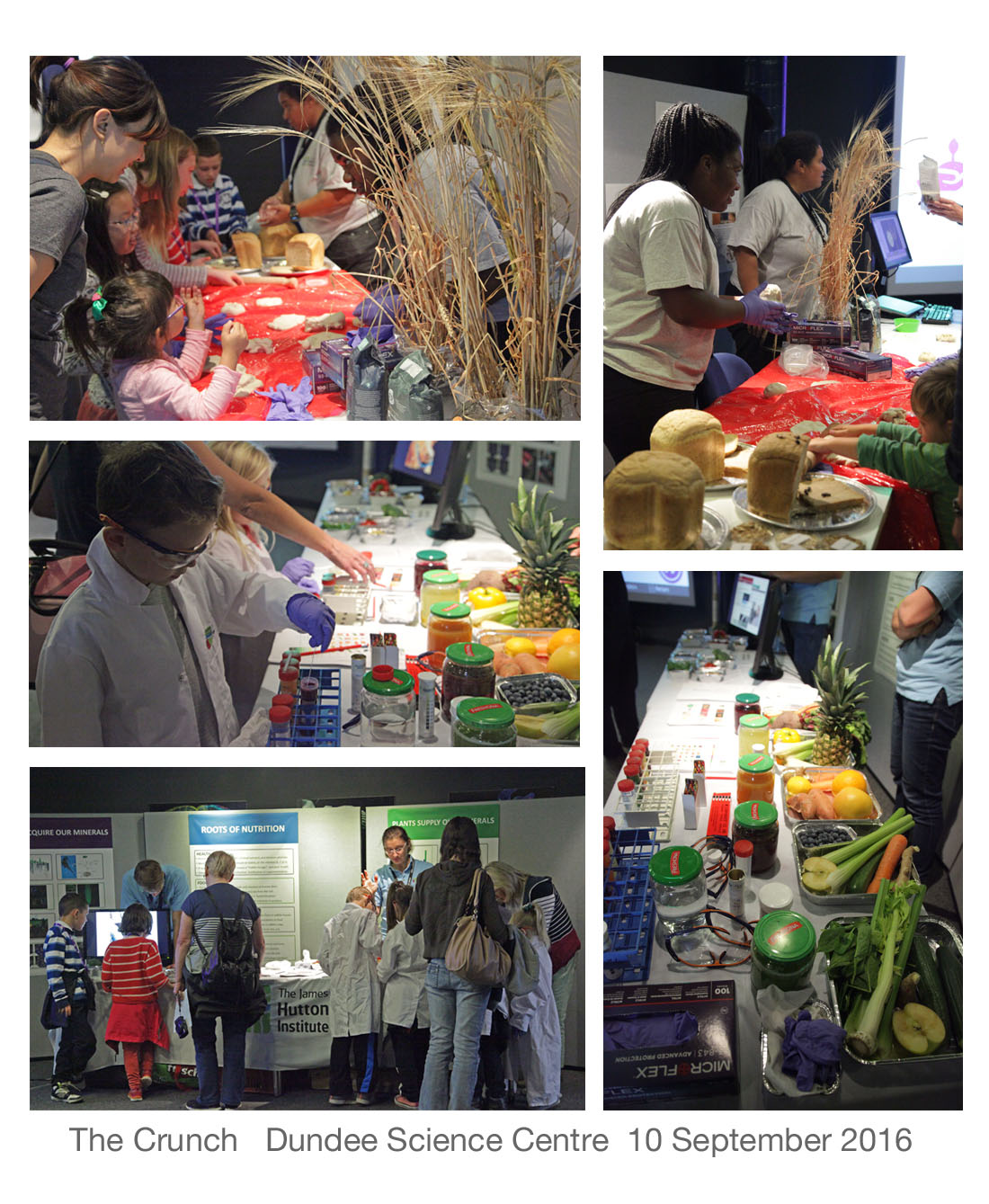 The team from the Hutton were based in the darkened auditorium, partly to enable slideshows to be viewed on computer screens, but there was enough light to get some images (above).

Roots of Nutrition Main themes are that humans need at least 18 mineral nutrients and thirteen vitamins; but many diets lack iron, calcium or iodine, or the Vitamins A, C or D, causing ‘hidden hunger’ and poor health. Plants provide most of these minerals and vitamins; they take minerals from the soil and make vitamins in their tissues. There are direct links therefore between soil, plants and health. Peoples’ wellbeing can be improved by good soil and crop management.  Science can breed crop varieties that take up minerals from low concentration in soil. Gardening and farming can provide the wide range of foods that between them contain all the necessary minerals and vitamins.

Grain to Plate Main themes are that grain (or corn) crops, mainly barley and wheat, and later oat, were first brought here by migrants over 5000 years ago. Grains have sustained most people and their animals since then, at least up to the second half of the last century when imported grain began to replace home-grown. Today, most of our cereal carbohydrate is grown in other places. Oats is the only one grown, processed and eaten locally. It also needs less mineral fertiliser and pesticide than wheat. Yet more cereals could be grown locally for human food. Examples of bread made from barley, wheat and spelt were on display …. and here ‘s an idea for the future – bread made from insect flour! How would agriculture look farming insects instead of sheep and cows!

Thanks to Aisha and all at the Science Centre for organising the event.

More Crunch on this web site: Bere and cricket, Feel the Pulse.