Turnip strudel is a typical strudel in the Međimurje County in northern Croatia …. writes Paula Pongrac …. where my parents are from. Also, very popular are cabbage and pumpkin strudels.

All the ingredients (turnips and walnuts, or cabbage and pumpkins) were available even in times of scarcity and were typically made when there were not enough apples or cottage cheese (these two versions of strudels are more common in Slovenia and Austria). 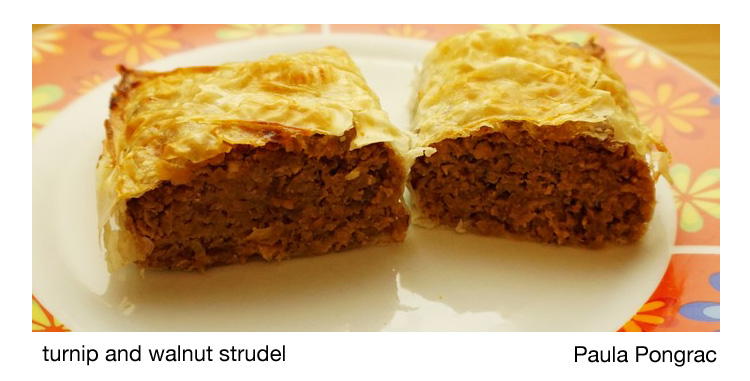 Here is how you make a turnip strudel:

Peel and grate one large turnip. Place it in a bowl with salted water and bring to boil. Simmer for 10-15 minutes. Drain it so you get rid of all the water. (When cooled you can use hands to squeeze it). You can stop at this stage and freeze it for later.

Otherwise or when defrosted, put some oil in the pan and place the drained turnip onto it, add sugar and ground walnuts and fry for some time, mixing frequently. Make sure, the walnuts and sugar are evenly mixed with the turnip. Cool the filling down.

Spread Filo pastry (two or three layers), sprinkle it with some oil and add the turnip-walnut filling. Roll it and place into buttered oven-proof pan. Repeat until you run out of Filo pastry layers and the filling. Spread sour cream over the Filo pastry and bake it until golden on the outside.

Cool the strudel down and enjoy. 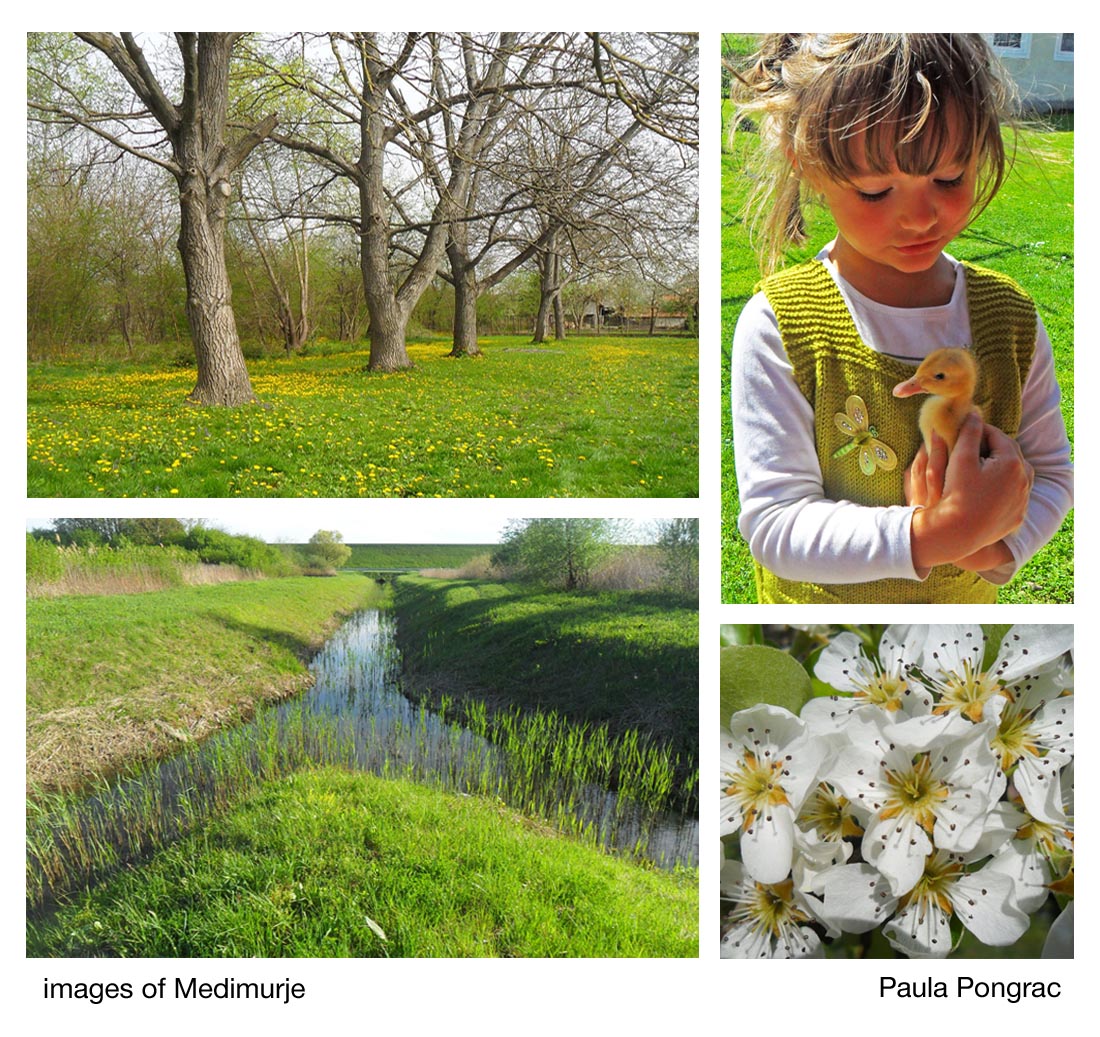 Paula’s captions for the photographs above (top left clockwise): ‘walnut trees are very common’; ‘…. or just for a pet’; ‘fruit trees make the area colourful and pretty’; manmade streams for field drainage’.

And following Cornbread, peas and black molasses and Peanuts to pellagra …. another way to avoid pellagra and other debilitating deficiencies in the diet is to taste and enjoy the sheer variety of fresh vegetables on display and for sale at our best local food markets.

Here is one held at a square in the town of Carcassonne, in the south of France, a few minutes walk from the Citadel.

It was well attended by locals, discerning or knowing in their choices, and by a few visitors, envious of the variety and freshness. 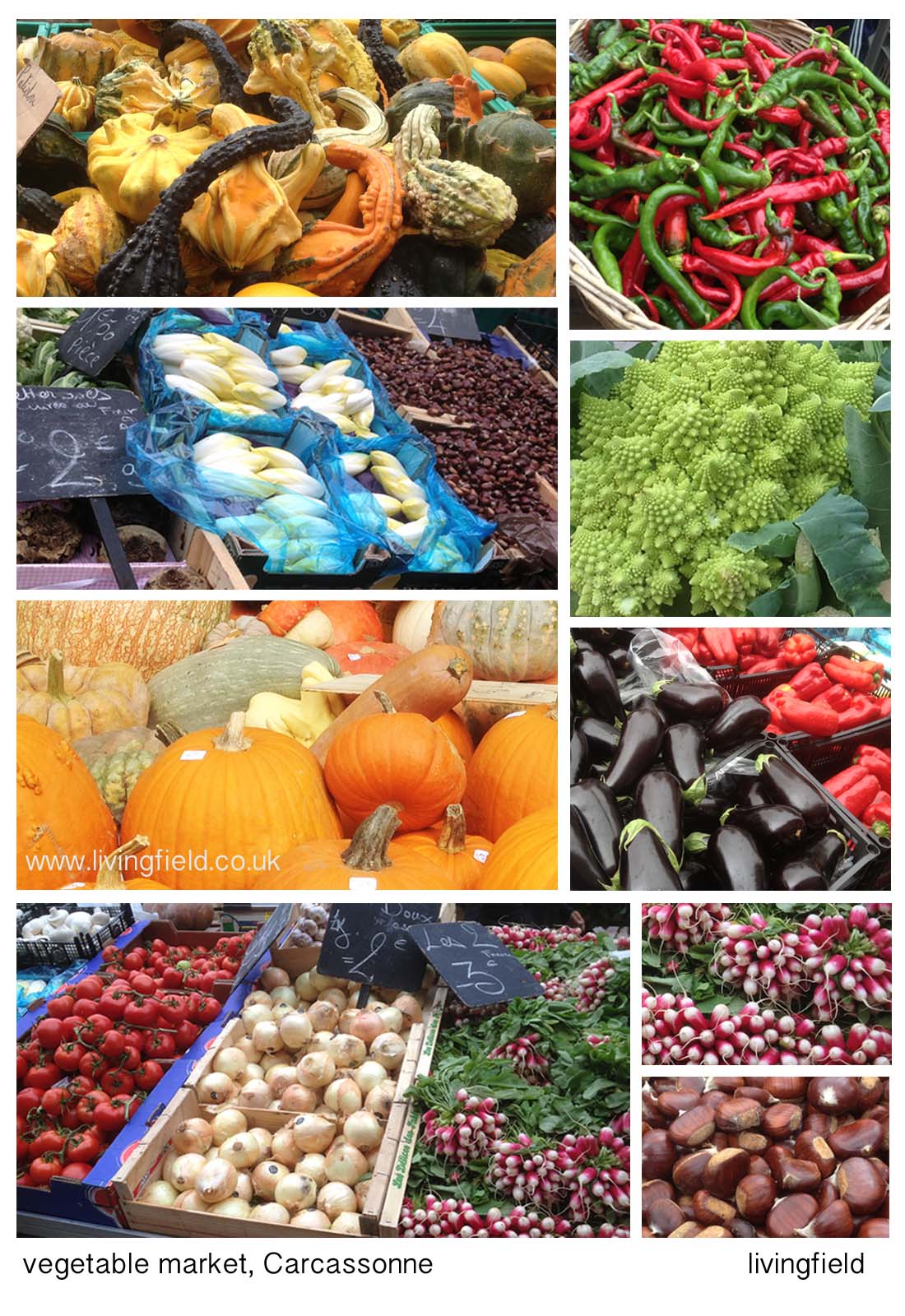 Here were the very fresh and short-lived leaves that need to be eaten today or tomorrow, others with tougher outsides that will keep a few days and still others like the onions, chestnuts and chillies that will keep for weeks or for months if treated right.

And below is similar produce from markets near Yangon in Burma. There’re maize cobs at the top left, on the same stall as pumpkins (also as Carcassonne). And for sale nearby is a diversity of green matter that you rarely see in Europe.

All parts of the plant are eaten – seed (the germinated bean sprouts), leaf, whether fresh or part cooked or pickled, then roots, root and stem tubers, various reproductive parts (tomato and chillies) and things unidentified. Nuts and grain legumes were also on display. 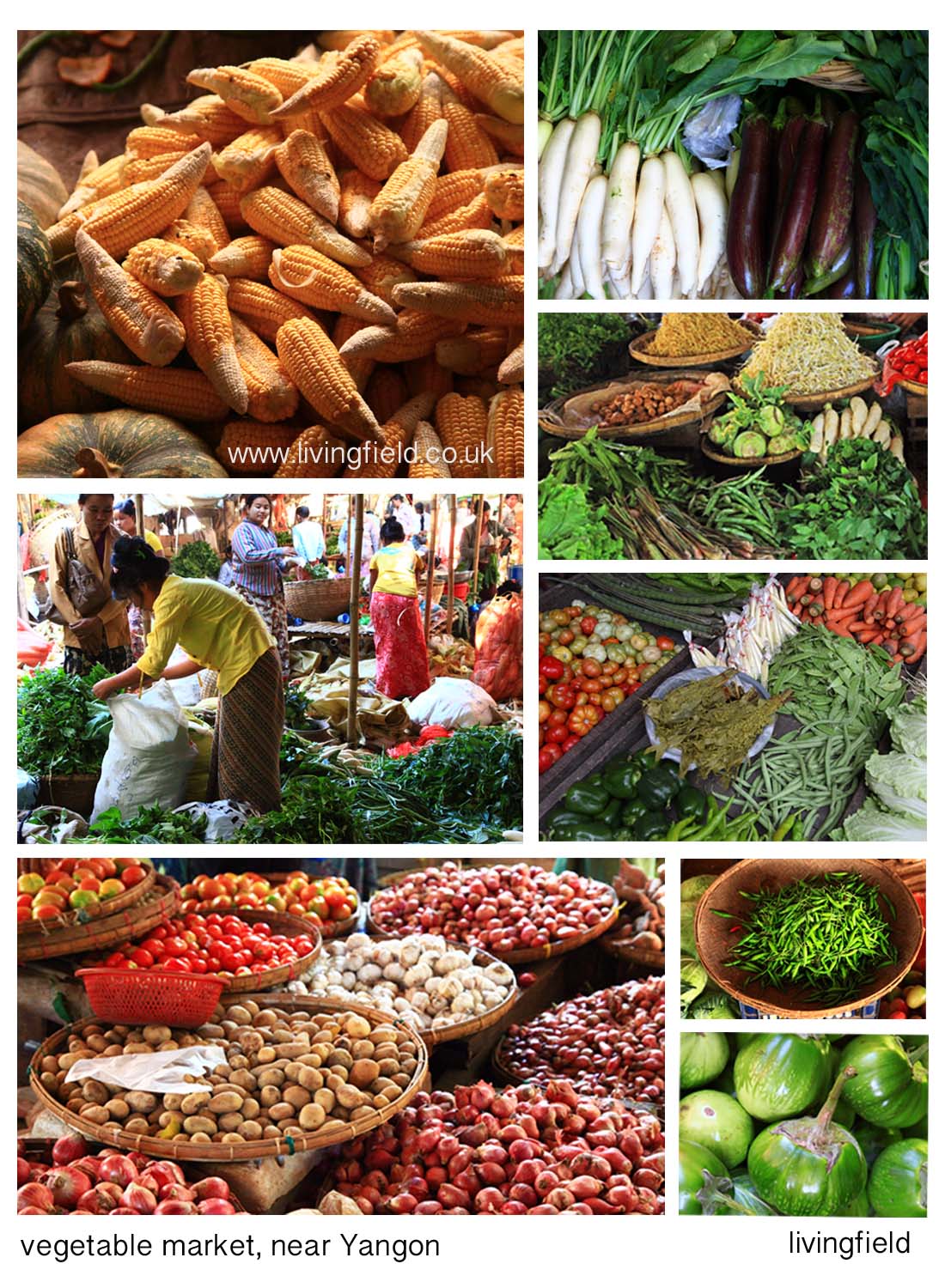 There are similarities in the produce offered at these two markets thousands of miles apart. They both offer this wide range of ‘keeping’  time. There are no ‘sell by’ dates! But people still know how long things last before they go off.

In well nourished societies, fresh produce is balanced with storable grain that will sustain families over drought or frost. Of the grains, cereal (corn) grain gives energy whereas legume or pulse grain (peas and beans) gives more protein.

Yet the offering for sale of grain is where markets like those near Yangon and Carcassonne differ. Much less storable grain – cereal or legume – is on display in Europe than in south east Asia.  Notably there is hardly any ‘short food chain’ grain for sale in local markets in Europe. Most of our grain is sourced globally and is highly processed.

In the north of the UK, for example, the most that the discerning home-buyer will see is a bag of locally grown oatmeal. And if in Orkney, you might strive to find a bag of bere meal (bere is a barley landrace).  And who now sells storable, dried, peas and beans?

There will be more on the balance end tension between cereals, pulses and veg ….. 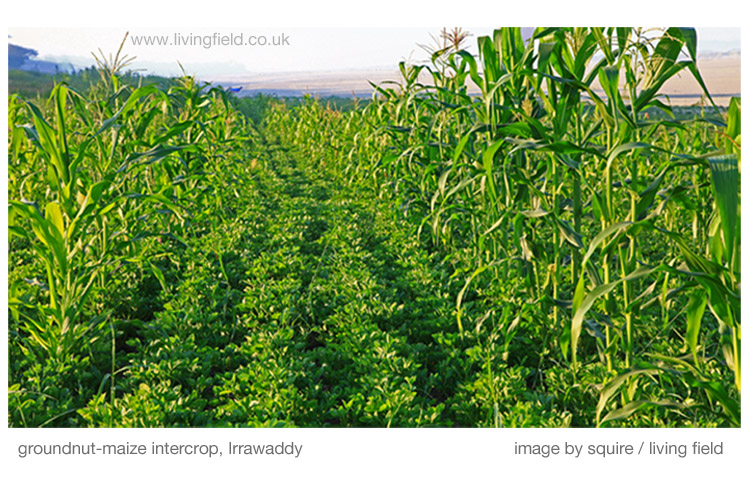 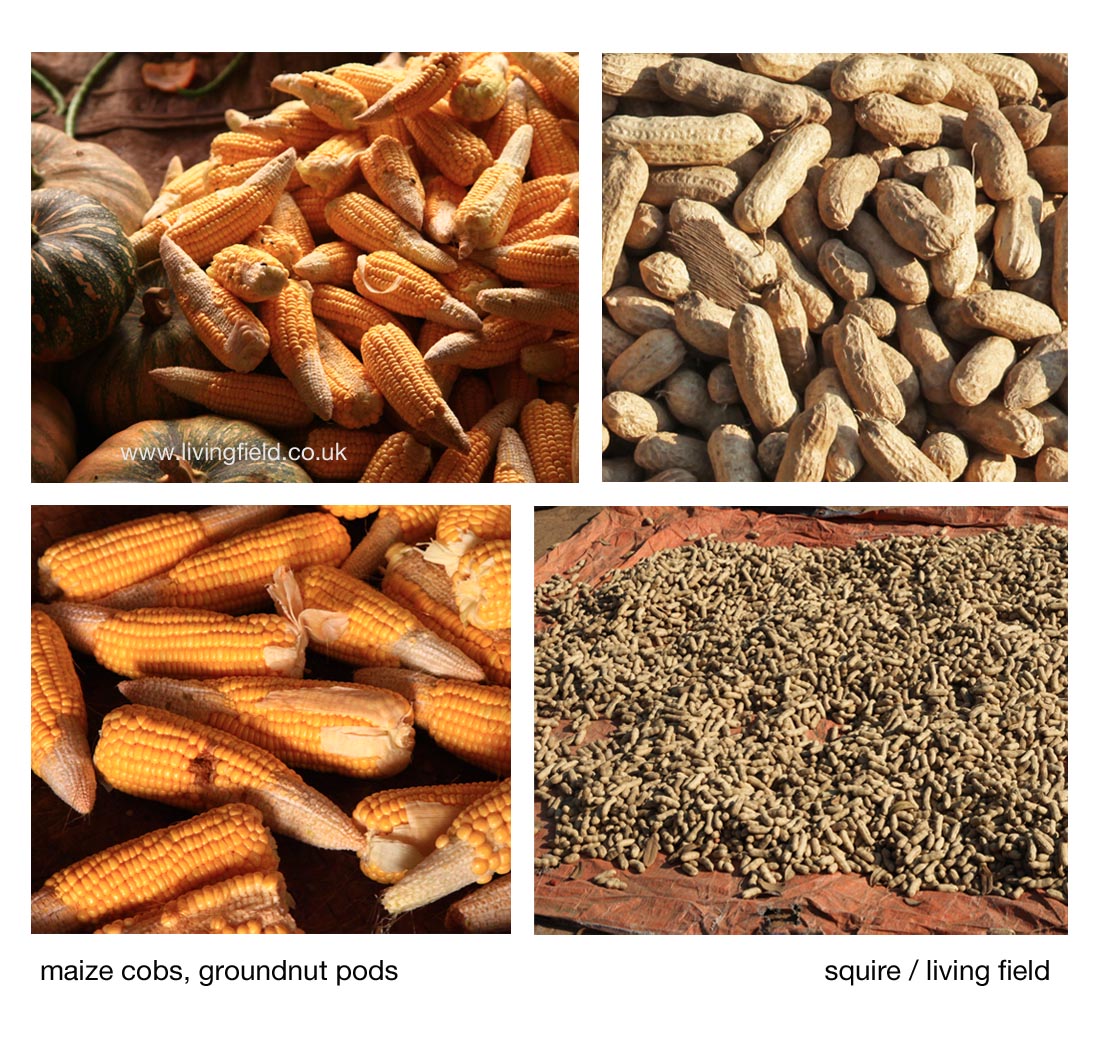 During his session at the Dundee Jazz Festival, at the Frigate Unicorn on 18 November, Mike Whellans performed the blues classic Cornbread, peas and black molasses. Memories…

Made popular in folk and blues clubs this side of the Atlantic by Sonny Terry and Brownie McGee, it was a work song – forced work – a complaint on a monotonous diet. The song leads back to a dark history, but also to an enlightened discovery of the cause of a serious dietary deficiency that was thought to be an infectious disease.

Cornbread is made from maize flour (maize is corn in the Americas) and black molasses from cane sugar (known as black treacle here). So that’s two members of the grass family, originally accompanied by fatty preserved meat, constituting the food of slaves, chain gangs and many rural poor. In fact, the words go Cornbread meat and black molasses in some versions of the song.

Not a healthy diet therefore and the cause of the disease pellagra, a deficiency in the vitamin niacin (B3 or nicotinic acid). Symptoms include sores covering large areas of the skin, vomiting, diarrhoea and eventually dementia.

At some point ‘peas’ entered the title, but they would probably have made little difference to the prevalence of the disease unless they were fresh.

The discovery by Joseph Goldberger in the USA that pellagra was a vitamin deficiency was a victory for logic and experiment over presumption and superstition. (See the links below under Sources.)

So where does the vitamin niacin come from. It is made in plants. They take up minerals from the soil and with the products of photosynthesis, make, for their own purposes, what we know as vitamins.

The deficiency has been associated with areas that consume maize (or sorghum) as the main staple carbohydrate, notably in the south of the USA, but including parts of southern Europe in the 1700s. Maize contains niacin, but not in a form readily available to humans.

A note on the Linus Pauling Institute’s page on niacin reads: “Interestingly, pellagra was not known in Mexico, where corn was also an important dietary staple and much of the population was also poor. In fact, corn contains appreciable amounts of niacin, but it is present in a bound form that is not nutritionally available to humans. The traditional preparation of corn tortillas in Mexico involved soaking the corn in a lime (calcium oxide) solution, prior to cooking. Heating the corn in an alkaline solution results in the release of bound niacin, increasing its bioavailability.’

Foods rich in niacin include pulses such as peas and groundnut (peanut), some fresh fish and meat, wheat bread, green leafy vegetables and fruits; and it’s this sort of food that the poor or enslaved pellagra victims did not get.

Poverty, slavery and the discovery of dietary deficiency

US Slave blogspot http://usslave.blogspot.co.uk/2012/01/slave-diet-low-in-niacin-causes.html (Note: includes images of people afflicted by the disease)

Links to other livingfield pages that touch on slavery: Empire at Wall projects II Montrose; It was slavery days.

Ed: first heard Cornbread peas and black molasses sung by Johnny Silvo quite some time ago, but no idea at the time what cornbread and molasses were. Good, also, to listen to Mike Whellans again. He played for a time with Ali Bain on fiddle, touring the folk clubs in the 1980s; never forget their versions of Sweet Georgia Brown and  Jimmy Clay (on a vinyl LP called Ali Bain – Mike Whellans).

Great venue, the Frigate Unicorn – an upper room stretches almost the whole length of the ship.