Throughout August, wet ditches and banks and boggy corners are filled with wild plants in flower and host to many types of insect.

Many of these plants have at some time or another been used in medicinal preparations – meadowsweet Filipendula ulmaria for fevers, and with willow the source of precursors of aspirin, valerian Valeriana officinalis as sedative, wild angelica Angelica sylvestris as condiment and cure-all, sneezewort Achillea ptarmica to clear a blocked nose, hemp-agrimony Eupatorium cannabinum for ‘catarrhs and coughs’ and yellow iris Iris pseudacorus whose uses are so wide-ranging that  one alone can’t be mentioned.

Hardly valued now, they still offer rich findings to those who wish to explore our botanical heritage.

The roadside bank and ditch above, in Strathnairn, holds, within a three metre length, all the herbs mentioned here except hemp-agrimony. Sneezewort is growing at the front on drier ground. Lower images, floral branches of meadowsweet (right) and angelica,  each home to many insects.

These plants thrive where the surrounding vegetation is semi-natural or else grazing land having few or no inputs of mineral fertiliser.

The Living Field garden grows all the medicinal plants mentioned here, but for garden angelica rather than wild angelica.

Unremitting wet since solstice-time in late June. The field scabious Knautia arvensis offers bee-food en masse for months in most years, and in June the mauve flowers promised a fine show, already thick with bumble bees.

Since then they have been thrashed by the heavy rain and wind and grasses now dominate the meadow. Yet on the rare sunny afternoon, the insects take their feast on the Garden’s wild plants.

Only the tufted vetch is common in the margins and lanes here. The others have been tried as forages in the past but are now rarely found. Other legumes flowering (not shown) include red and white clover, the yellow-flowering melilot  and greater bird’s-foot-trefoil, all well attended by bees.

The other plants that most years offer months of rich flower-food fare no better.The striking, blue viper’s bugloss in the medicinals bed is almost finished bar a few, one of which is shown above right. And the remaining field scabious, bottom left above, will continue to put out their sumptuous floral parts for bees to drain and trash.

Yet again, the benefits of growing in this small space a diversity of native and medicinal plants pays, because teasel, knapweed and greater knapweed, and a set of annual composites including cornflower and corn marigold are all offering their wares in return for chance pollen.

Teasel will now flower along its bristly head for some weeks – the ladybird in the image top left above just slotting in between the spikes, jostling several aphids that may not be visible at this magnification.

What’s to come – the deadnettle family – the labiates – will sustain the insects through to the autumn equinox. Many are only just in flower – betony, wild marjoram, some field mints, hemp-nettles, a calamint, sage, lemon balm and hyssop.

This fine exhibition, on themes of Empire, is housed at Wall Projects II in the Old Ropeworks off Bents Road in Montrose. The venue itself is a work unique, including an upper room (image below) and the very long and narrow rope works on the ground floor, disused and part derelict and now open in places to sun and rain. 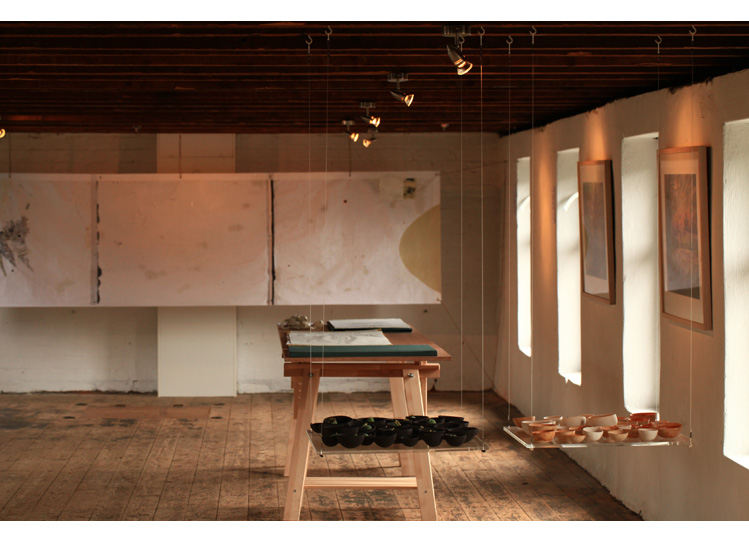 Dark in parts, this exhibition: it makes you think of how ordinary people become complicit in dire trades and livings, in buying and selling people, in slavery on a massive, organised scale.

Here’s the earner: sail to european ports with some good local Scottish produce like salmon, textiles and things to smoke; offload the cargo – but an empty ship costs money – so off down to Africa to fill up with slaves; take them to the Americas, leave them there to be sold and worked; then bring back tobacco. Scottish enterprise! So tells the audio exhibit Considered Cargo by Carolyn Scott. 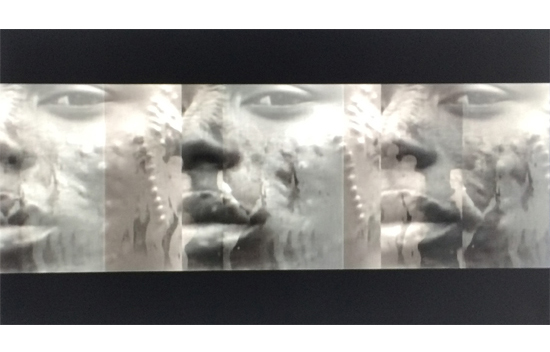 The dehumanising of peoples considered little more than zoological specimens continues in the utterly mesmerising four-minute video Shadow Show by Kyra Clegg (an image captured above by K Squire).

Other artists tell of the whale trade, the driving to near extinction of these great, warm blooded, social mammals; the realisation that they individually suffer. Linen, whale oil, jute, slaughter, wealth  inextricably linked.

It’s not all dark – there is lightness and humour among the twenty artists exhibiting here, but threads recur of claim and exploitation. 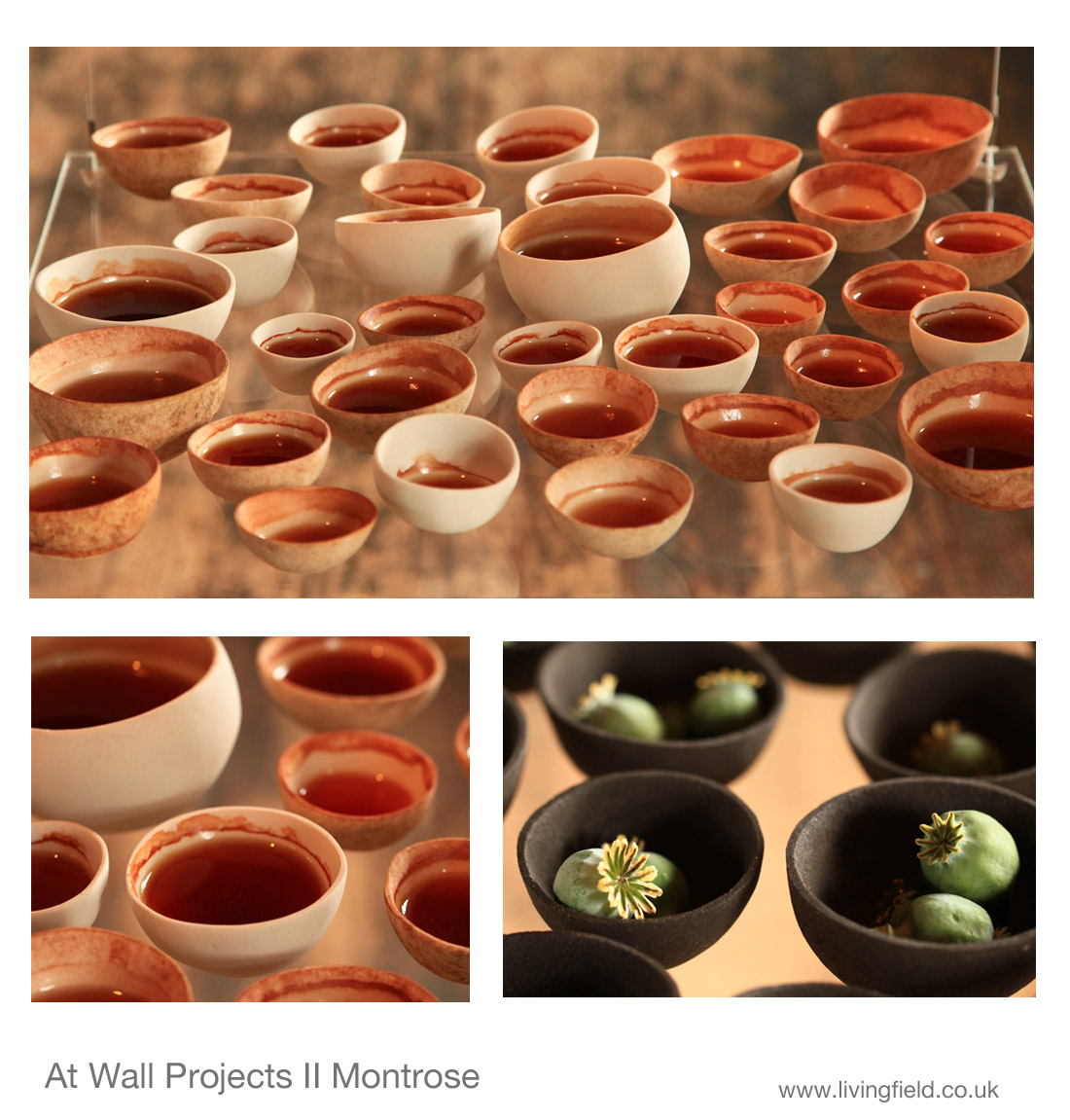 Take the insidious link between beverage and narcotic, tea and opium, Camellia sinensis and Papaver somniferum, a leaf-stimulent drunk by most people in Britain and the poppy-head-latex source of the heroin trade. Those Europeans who like tea, should perhaps know its origins. But no blame to the tea plant, and no blame to the poppy for it also gave us one of the best painkillers.

At the farthest end of the rope works is an impenetrable mass of ivy roots, hanging down, and from them (or to them if you look the other way) stretches the orange to yellow to grey to black complex curve of coloured, filled balloons in Meltwater by Juliana Capes. It’s the seasons played out.

We spent some hours at Empire. Sorry not to mention all the artists exhibiting, but go and see for yourselves. One of the very best.

Society of Scottish Artists web page on Empire has many  photographs of the exhibits and notes about the artists: http://www.s-s-a.org/empire-at-wall-projects/