The Living Field Garden was created in 2004 from a corner of a muddy field at the James Hutton Institute, near Dundee, a mile north of the Tay estuary. It has served as a community garden maintained by staff at the Institute – a place to display and study the crops, wild plants and habitats of  lowland Scotland.

Latest … [update 17 April 2022] … due to staff retiring from the Institute, there have been no plantings or ground care of crops, vegetables, medicinals, dye-plants, legumes or fibres in 2021 or 2022  ….  for enquiries see contact below.

Linda Ford sent some photographs of the garden’s plants on 30 July 2021, noting that “the garden is wild and looks great for it.’ Here are two old favourites.

This web site began in 2014 to celebrate the first 10 years of the Living Field garden. Here we will show the habitats created in the Garden and the crops and wild plants grown in this region – cereals,  legumes, medicinals, oils, dyes, vegetables and fibres.

Previously in the Garden

The warm dry summer of 2019 moved the plants quickly through their phases, too quickly for some, but then the heavy wet of late July and early August dampened reproduction and brought out the vegetative in them.   The garden had its share of painted lady butterflies, not seen here since the garden began in 2004.

The medicinals and dyes beds thrived on the combination of warm and wet. A few of the mullein reached around 7 feet in height, as did marsh mallow and chicory.

Photographs from the garden in 2019 are continued below.

The web pages on the garden are arranged according to habitats, living exhibits and projects. Each will have a page that you can get to from the right hand menu or the links below. The small posters at the top left of pages were prepared for the 2012 Open Day.

The living exhibits are

And some species or groups of special significance are described at Plants.

Late July to early August and the chicory is in full flower, whorls of bright blue petals, but the earlier blue of the flax has gone leaving a mass of maturing seed heads. Weld, once grown for a yellow-coloured dye, still bears its tall floral spikes that bend near the tip.

A mix of weather in early spring this year, but the trees and hedge shrubs are well into leafing and some into flowering. The photos below, taken 11 April 2019, show gorse or whin in full flower (dye and once pulped for stockfeed), willow in flower and leafing (the origin of aspirin precursors), flower buds of gean or wild cherry (bitter fruit loved by birds, quality wood) and flowering blackthorn (sloe berries used as flavouring, wood for implements).

[revised images to be inserted] 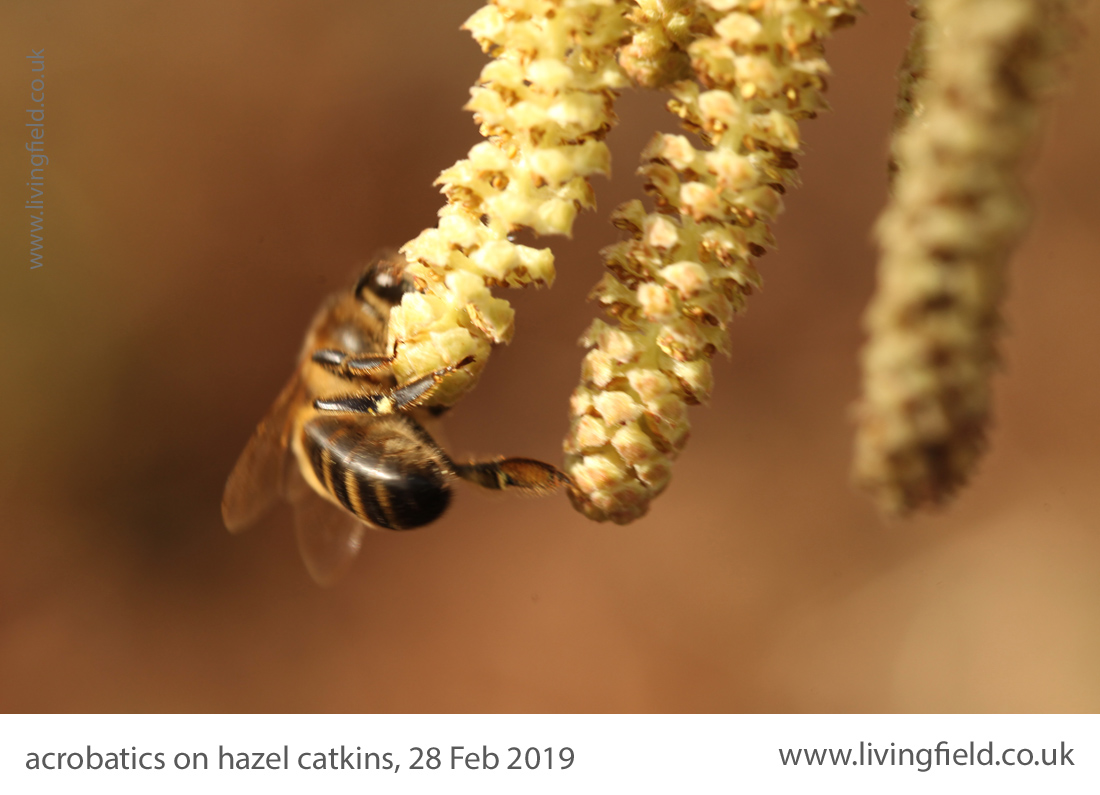 After some very frosty days, the warm February of 2019 caused some early activity. The insects searched for limited food – some found it on the hazel catkins.

Late September ….. the hot summer leaves most of the garden bare of flowering plants, the meadow finished and cut but the hedges plentiful in fruits. 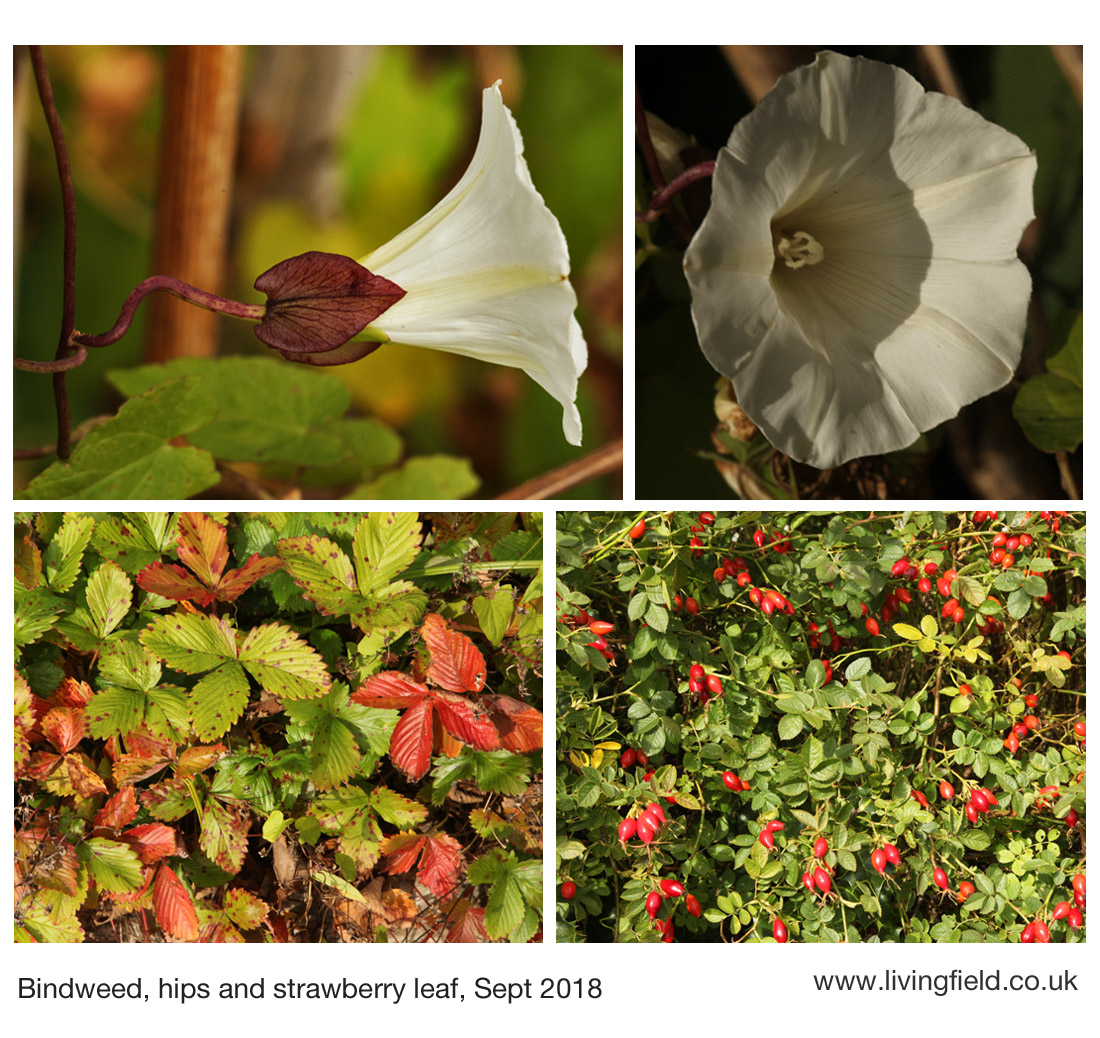 Every year, bindweed Convolvulus arvensis curls up the 8-foot tall lovage stems and here it is again. You have to appreciate its tenacity. The wild roses are very full in hips this year and many plants are showing the mixed green and red of autumn leaf.

July – and all the plants are well ahead of the year due to the hot weather. Above the optimum temperature and development is shortened, the phases compressed, so that by late July the meadow was almost over, the scabious flowered and not much left but lady’s bedstraw. Still, the plants in their various  micro-habitats showed their usual diversity of form. 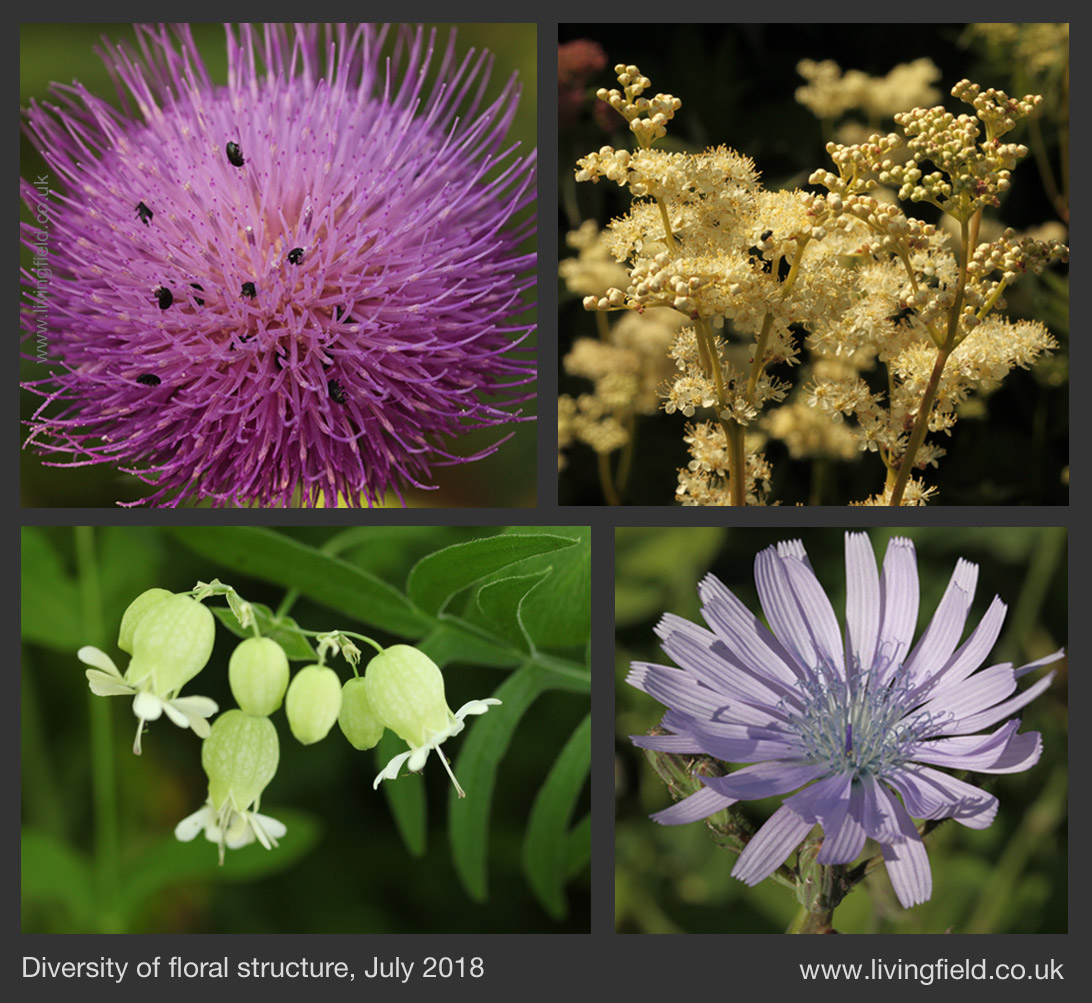 Here are the flowering head of melancholy thistle, floral branches of meadowsweet, blue sowthistle and bladder campion, very pale in the shade of willow.

Early June – lack of rain is making life hard for the crops and other annual plants but the the hedges of native species are flourishing,  bursting with insect and bird life, particularly the wild roses. 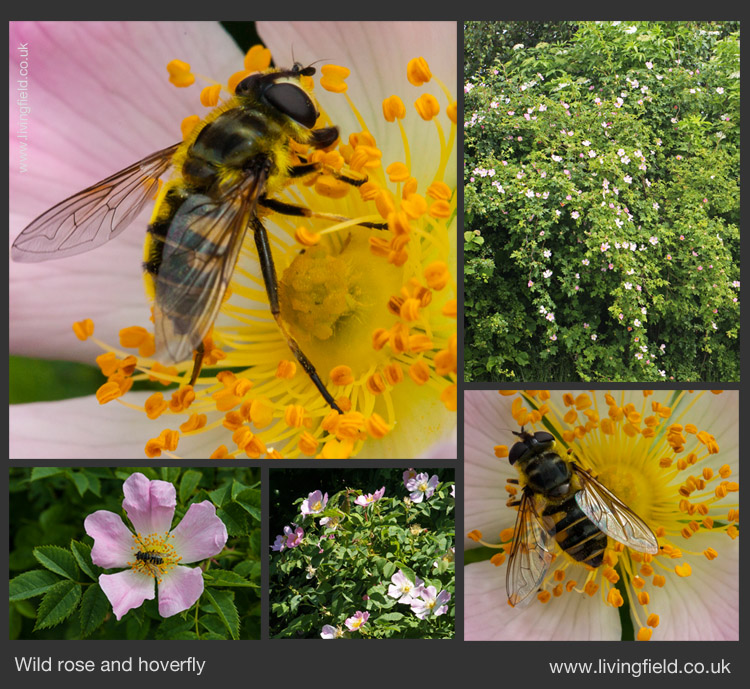 Mid-May – the angelica is looking massive and about to flower, huge hollow stalks rising above the foliage. The blue sowthistle, transferred here a couple of years ago, has expanded into a large patch and needs to be reduced. Its new leaves show a fine structural tracery, lit in the slanting sun. The economical partition of leaf-space by the ‘veins’  is clear, even with a hand-held macro lens. 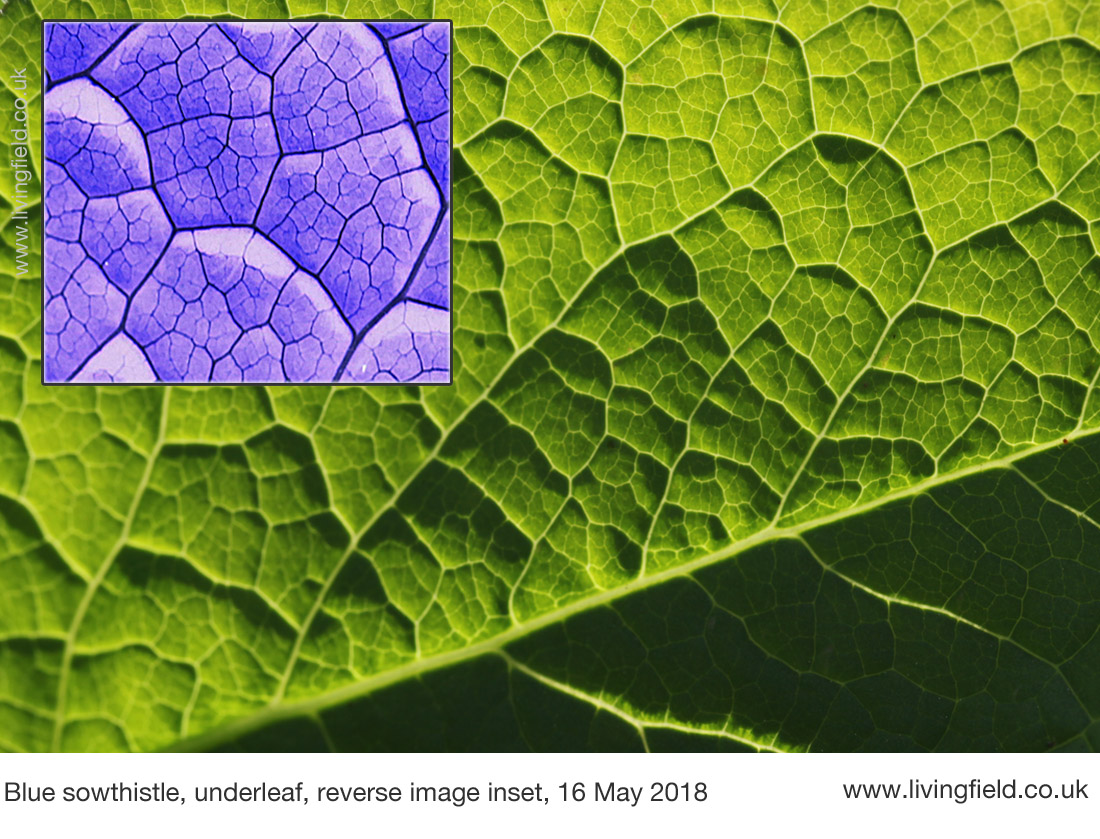 Early May – the perennial plants are recovering well from the long, cold winter. We put some primrose and cowslip under the trees a few years ago and they have returned to flower each year in small patches. Here is the primrose at the early May cross-quarter day, Beltane. 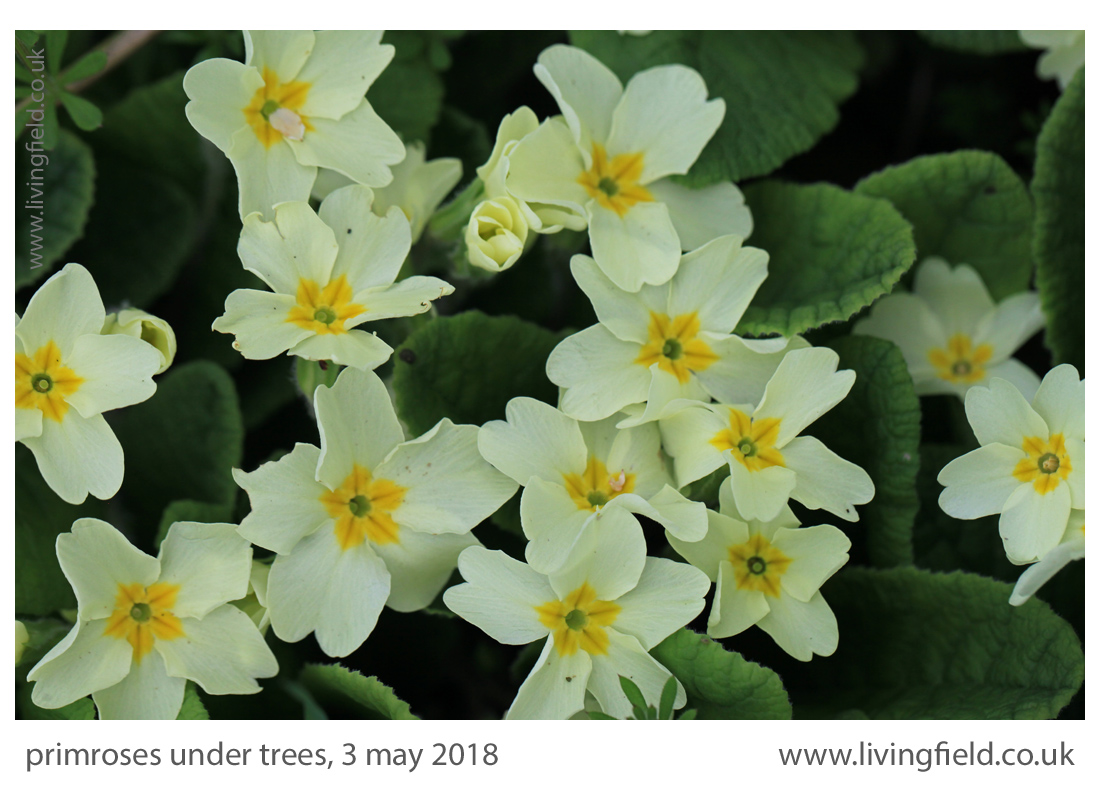 Coltsfoot, a medicinal but troublesome weed in open ground, is pushing through a leafy canopy of blue sowthistle, its composite flowers held above a mealy stem, visited by bees in mid-April. 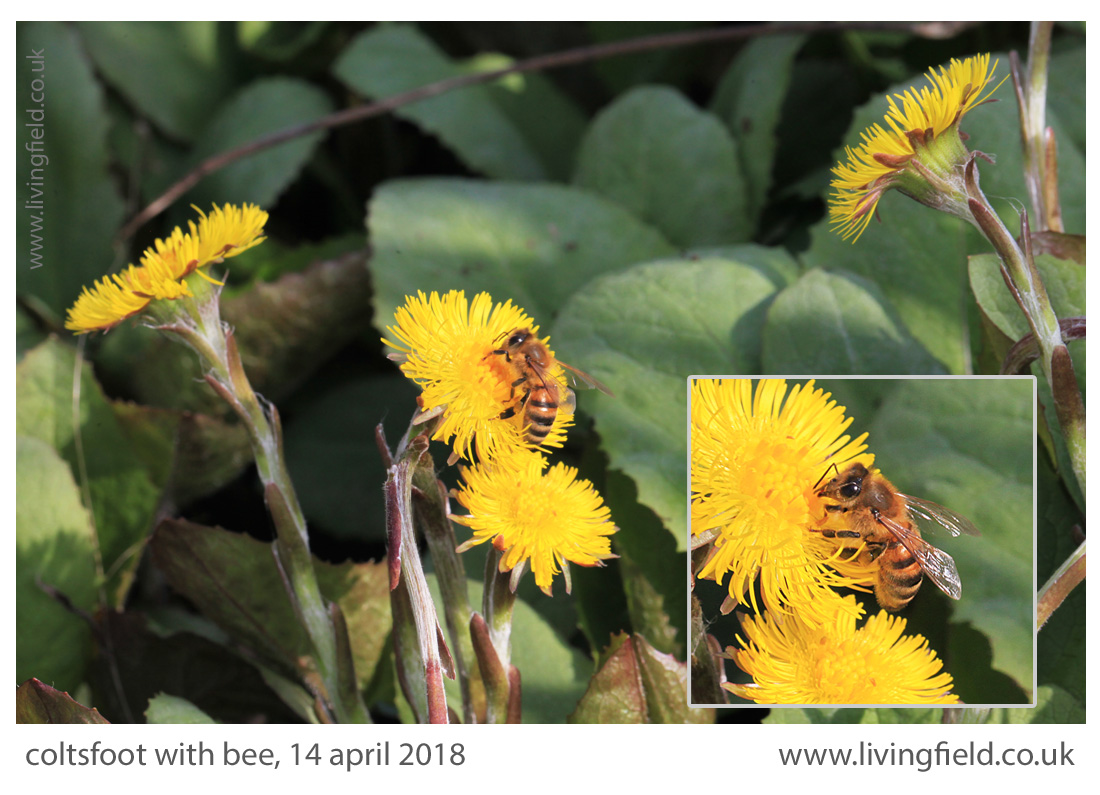 The Living Field Garden is maintained by Gladys Wright and helpers, Geoff Squire and Paul Heffell from the farm. Jackie Thompson worked along with Gladys for many years but recently moved from The James Hutton Institute to begin another career. 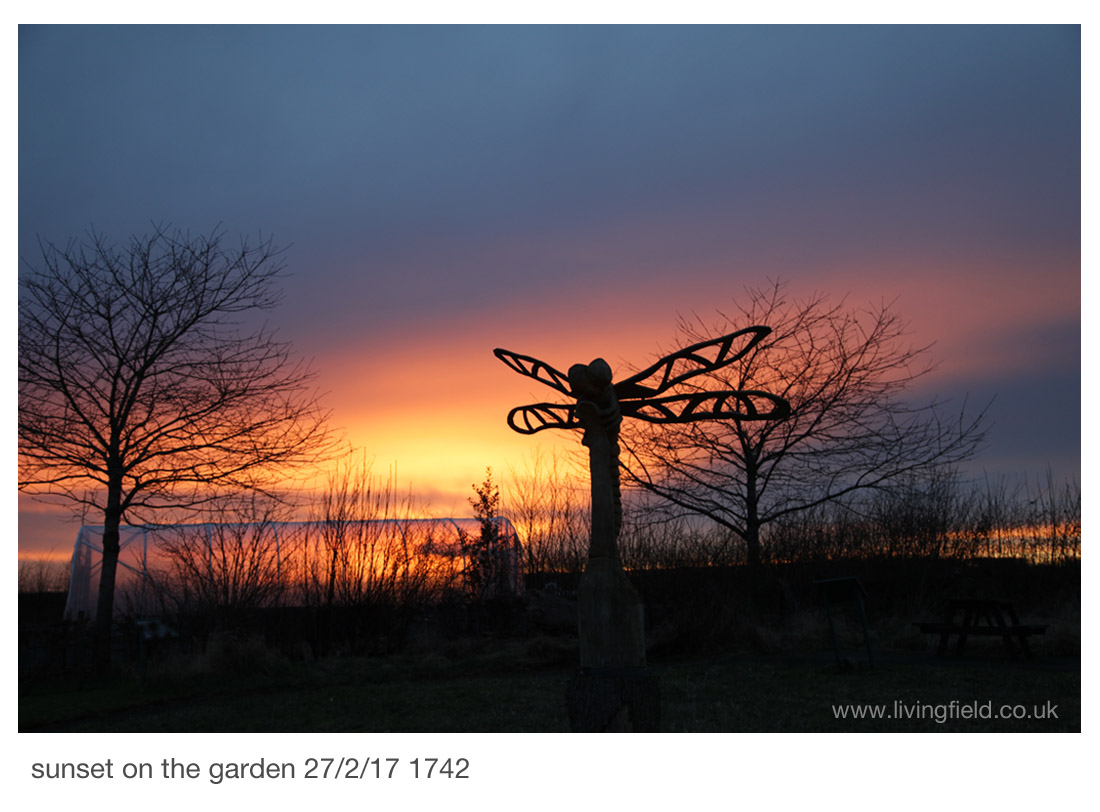