The winter solstice is the time of shortest days, lowest sun and least solar energy. The solstice usually occurs on 21 December. The croplands are not yet in the depths of winter: there can be snow and hard frost next to warm days when the air temperature rises.  Yet the crops and wild plants are hardly growing.

Images around the winter solstice

Haar is a dense sea-mist that can cover the croplands at any time of year. On a cold day in winter it sometimes deposits frozen rime on crops, trees, walls, fences and any other surface. Images are from Angus and Perthshire.

Solar energy and the air’s temperature

The graph shows the location of the winter solstice (WS) on the annual cycles of solar energy and temperature. The solar cycle, the orange line marked ‘sol’ on the graph, is at its lowest point.  The days are shortest around this time, the sun is at its lowest altitude in the sky and is often obscured by cloud. The weather can be bright for a time around the middle of the day, but more commonly there is cloud and sometimes a sea fog, a haar that ‘drips’ ice. 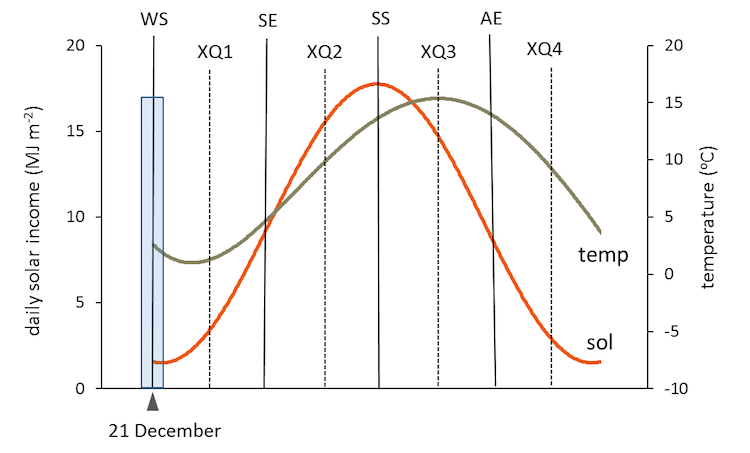 The position and usual date of the winter solstice, WS (Living Field)

Temperature is still declining and in most years has not yet reached its lowest point.  On some days it can be over 10 degrees Celsius and on others just below zero.  The temperature depends on where the wind is blowing from, whether warm from the south-east or icy cold from the north. A strong north easterly takes only a few hours to get from Siberia. The direction of the wind depends on the position of weather patterns in the north Atlantic: as they move across Britain and onto mainland Europe, the wind – and temperature – can change  by the hour.

[Source graphs at The Year explain how the sol-temp graph was derived and examples of the day to day variation.]

The winter solstice is the darkest point in the year’s cycle. Night is almost three times as long as day. 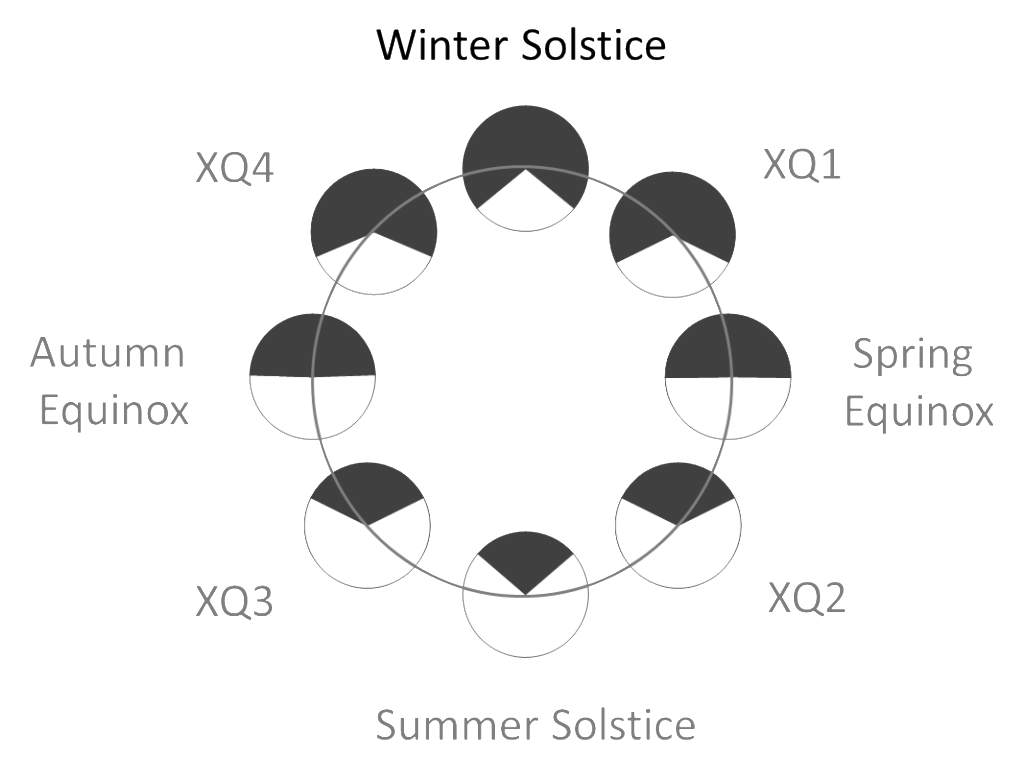 There are four states to the arable fields: harvested and ploughed, showing bare soil and no crop; harvested and still in stubble, the crops yet to be sown; harvested late summer and sown in autumn with winter crops and now showing rows of green shoots; and in the minority, fields of ‘root’ crops and forages, sown earlier and now full and green.

The weather variable – the fields can be open, revealing the greens and browns of crops, soil and stubble; or else covered in sheets of ice or snow, or frozen-drenched in haar.  It depends in the weather-patterns in the north Atlantic – a wind from the balmy south or a freezing down-draught from Iceland, the Baltic or Siberia. It can change day by day.

Of the winter crops, oilseed rape is perhaps the most sensitive; it needs to be sown as early in the autumn as possible, giving it time to get its roots down into the soil and a good canopy of leaf before the winter chill starts to cut it back. Delay in sowing much after late August will bring a yield penalty next summer.  Winter barley and winter wheat, and occasionally winter oat, should all be showing bright green rows of emerged shoots, but mostly not yet closed into  a complete leaf canopy.

The ploughed and stubble fields are most likely waiting for the spring sowings, three to four months to go.

There are many, this time of year, marking the low point in the sun’s calendar, some ancient or revived from the past, some more recent and building on ancient markings, the traditional customs hanging on, reinvented and sometimes almost disappeared. Here are a few  [in progress …… .

Great music and song also – traditional and written carols, chants and liturgies, the turning (in time and mind).

The record label Free Reed published its box set titled Midwinter: a celebration of the folk music and traditions of Christmas and the Turning of the Year. 2006. Booklet (Nigel Schofield) and 4 CDs. Unrivalled for breadth of coverage.