A meadow was traditionally  used to feed farm animals. Either the animals were let in to graze the meadow, or it was left to grow and  then the hay cut and stored for winter feed.  Traditional meadows were unfertilised, except by animal dung, and built their nitrogen through legumes such as clovers.

The arrival of industrially made nitrogen fertiliser changed traditional meadows after the early 1900s. Not having to rely on nitrogen from legumes, meadows could be cut several times a year, thereby increasing production and feeding more stock per unit of land; but with the added nitrogen, away went the botanical diversity and with it the knowledge of meadow plants and their uses. Traditional meadows are now rare habitats in farmland.

The plants are mainly perennial – annuals and biennials may appear if the ground is disturbed, for example by scouring from animals’ feet. Grasses include fescues, perennial ryegrass, meadow grass (Poa species), timothy, crested dog’s tail, cock’s foot and sweet-vernal.  Legumes include the two common clovers, red and white, birds-foot trefoils and sometimes kidney vetch, alsike and lucerne.  When unfertilised, a meadow will also contain a range of broadleaf plants such as scabious, mallows and lady’s bedstraw. 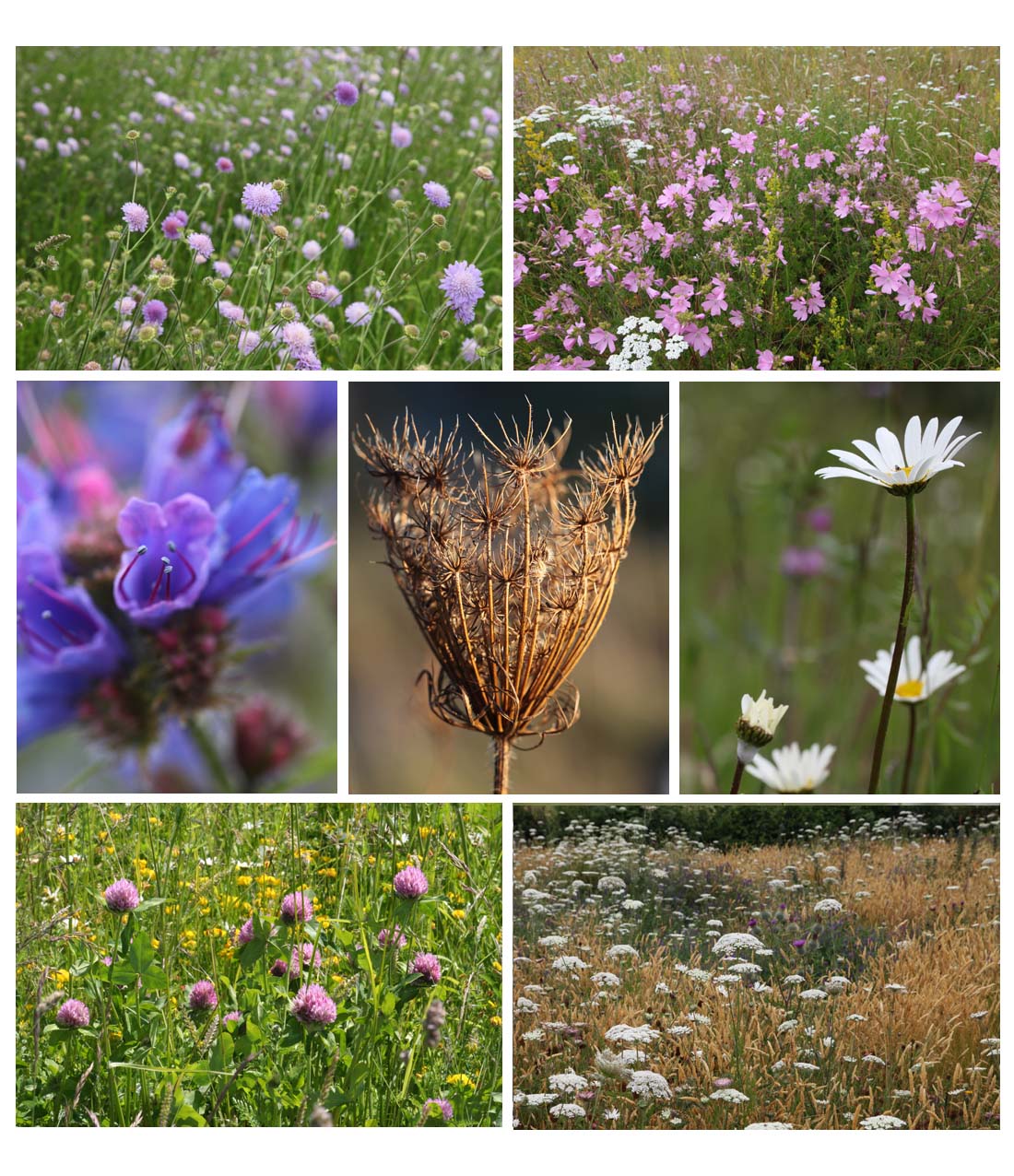 The meadow sown in the garden in 2004 has been resplendent – every year a refuge of plant form and insect activity. It reached its highest botanical diversity after about 6 years,  but became more dominated in the last two years by five or six species. Perhaps it’s time to change the management.

Plants evident in the first few years are described in the page on ‘Cornfield annuals’. Those below are perennials that defined the community after 2006.

Lady’s bedstraw Galium verum in among the grasses showing an improbable architecture  of finely cut leaves on a slender stem topped by a frothy mass of yellow flowers, yet relative of one of the most noxious arable weeds, cleavers, and the dye plant, madder.

Field scabious Knautia arvensis now the most abundant dicot in the meadow, and the one most visited by bumble bees, putting up new stems and flowers like big buttons for the longest period right up to the heavy frosts.

Knapweeds both common knapweed Centauria nigra and greater knapweed Centauris scabiosa lived in the meadow in the first few years but they now tend to occupy the margins or else adjacent land less densely claimed by the grasses. Both flower for several months each year and are rarely free from visiting insects. The same genus as the annual cornflower Centaurea cyanus which no longer grows in the meadow (see Cornfield annuals). 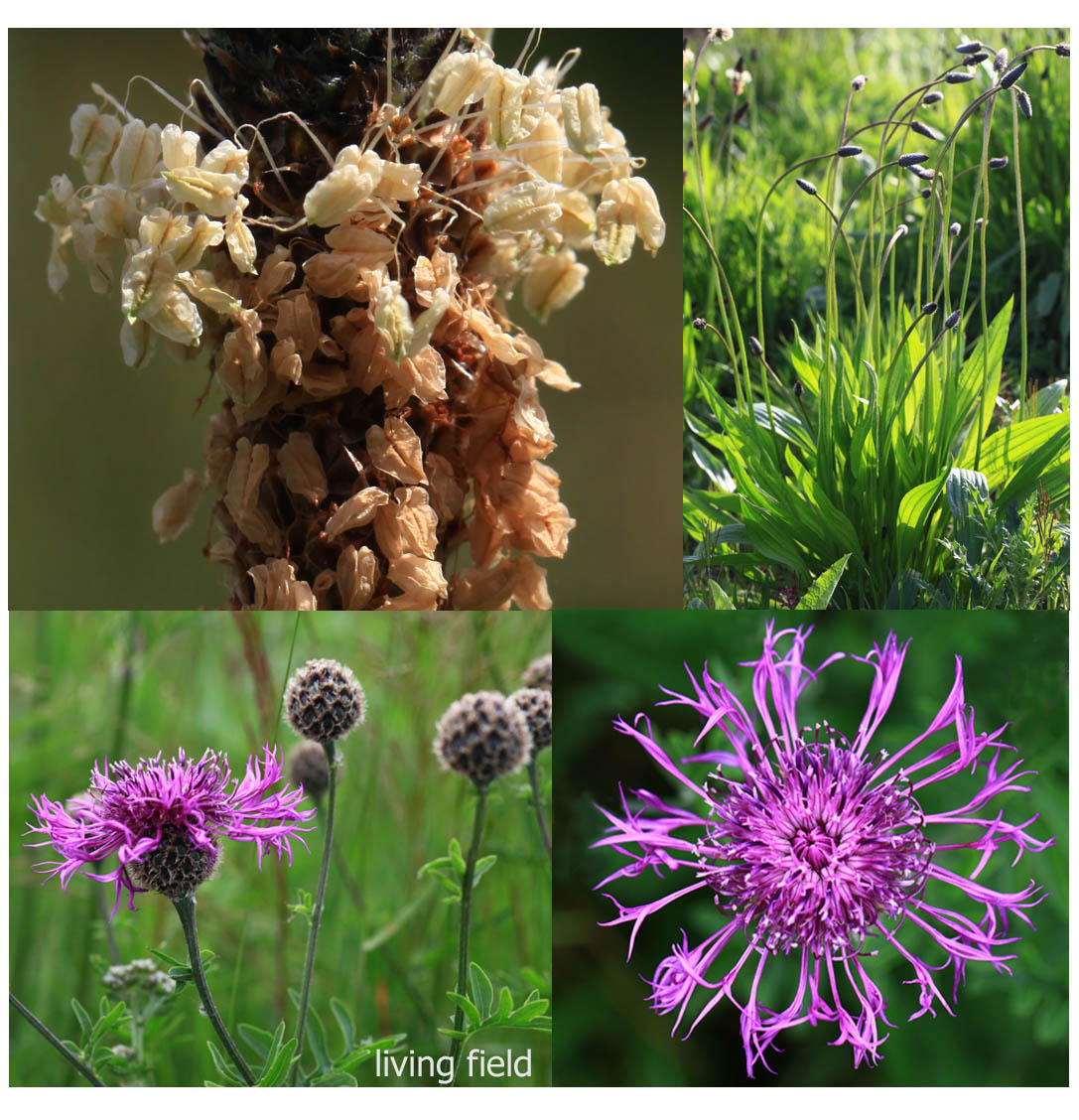 Images above: Ribwort plantain, close-up of anthers on the flowering spike, each less than 1 mm wide, the lighter ones being newer (upper left), and a plant (right); greater knapweed (lower) and top-down view of its composite flower head (Living Field collection).

Wild carrot Daucus carota develops later in the season than most other meadow plants, has finely cut foliage and a dome shaped flowering umbel, creamier than the white yarrow, and with a dark ‘spot’ at the centre. After flowering the umbel begins to curve in on itself to protect the seeds.

Viper’s bugloss Echium vulgare is one of the borage family, its striking deep blue flowers attractive to pollinating insects; being biennial or a short lived perennial, it needs germination sites, so after a few years it moved to the edges of the meadow by the paths and has now taken refuge in the medicinals bed. 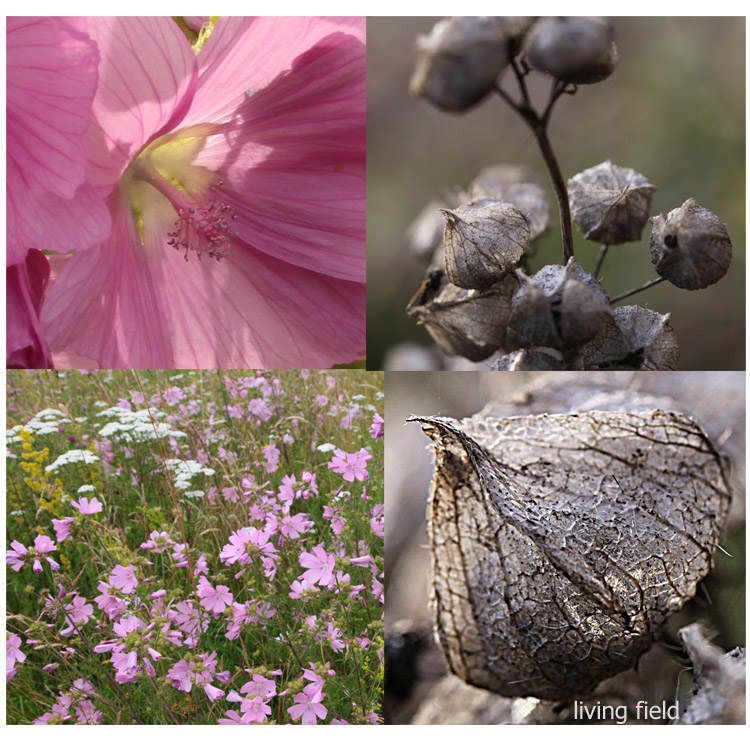 Mallows mainly musk mallow Malva moschata the one with the more finely cut leaves and smaller pink flowers (images above), and common mallow Malva sylvestris perhaps less comfortable among perennials that the other and now confined to the fringes.

Oxeye daisy Leucanthemum vulgare early to leaf and flower, just after sweet vernal, and brings an early architecture based on its flower’s yellow centre and large white ray florets (the one in the main image on the poster above).

Grasses Many species persist: Cock’s foot Dactylis glomerata can form tough tussocks, but does not spread or dominate in the meadow; sweet vernal grass Anthoxanthum odoratum the first to flower in the garden; but  the bulk of the grass foliage is made up of perennial ryegrass, perennial meadow grasses, various fescues, timothy and crested dog’s tail.

Legumes the plants that fix atmospheric nitrogen in their root nodules and so fertilise the soil are an essential part of unfertilised meadowland, but they decline and disappear from ‘improved’ grassland given mineral nitrogen fertiliser. Main species are greater bird’s foot trefoil Lotus pedunculatus, red clover Trifolium pratense and common vetch Vicia sativa, but a few plants of kidney vetch flower most years. The legumes appeared in strength after two to three years, presumably when the existing stocks of soil mineral nitrogen had been used.

While the main bulk usage of meadow hay was to feed stock, many of the plants were known and used as medicinals, cosmetics and dyes. Lady’s bedstraw, sweet vernal grass and musk mallow were used in mattresses and as household scents.  The bedstraw also gave a pale yellow or red dye.

Common mallow’s mucilage was a base for ointments and poultices. Yarrow and the legume kidney vetch Anthilis vulneria were wound-herbs. Field scabious was “the herb for scabies, the scab, the mange, the itch” (Grigson).

The meadow occupies a large patch sown in 2004 in the centre of the east garden. For the first year to so, the plants were mainly annuals and biennials – poppy, viper’s bugloss, some cornflower –  but gradually the perennials ousted them and took over – field scabious, lady’s bedstraw, common and musk mallows, grasses and a few nitrogen-fixing legumes. Many of the plants were not sown but found their way in, carried by birds, mammals, people.

The meadow in the Garden was sown on a farm field that was probably rich in mineral nitrogen, but has been given no fertiliser or pesticide in the past 10 years. Getting the plants established can be a problem particularly if there is  a seedbank of arable weeds in the soil, but cutting and  removing the hay, and with it plant nutrients, has worked so far.

Occasionally, a few individual rank weeds such as docks (species of Rumex) and thistles (species of Cirsium) try to force an entry and have to be dealt with individually.  But ‘weeds’ have not been a problem.

Paul from the Farm cuts the meadow about 10 cm above the ground every autumn, then takes away the cut herbage.

As indicated above, some further disturbance may be needed to allow more species to coexist.