“The fox came to be called Reno, a witness to many things, many changes – opportunity as well as persecution. The wolf and bear have gone, yet the fox remains. Reno has a story to tell.”

This is Reno, drawn by Grissel.

“This is not like the philosophical Reno we know! Is it a laugh? Is it a snarl?”

Not one nor the other – it’s the Mocking Fox!   All those centuries of persecution in the fields and hills and you go an’ invent cities and fill them full of gardens, wasteland, alleys and  – a new home for the fox, a refuge from snare and gun. And people, some people who never see the wild, like to to see a wild animal. They don’t mind the fox – so long as we keep off the hamsters and rabbits. It’s the same human species – no wonder I’m mocking! But it gets worse … 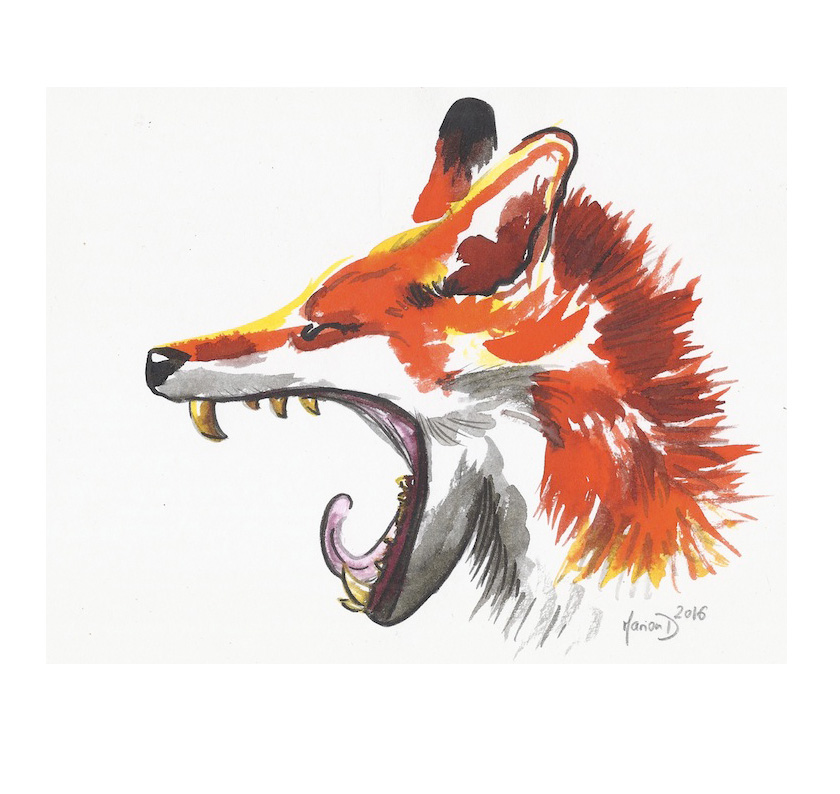 There’s foxes that get use to that life, get soft, make friends with the humans, get fed by them! What sort of fox is that? They deserve to be mocked. One day soon the humans will change and all those soft foxes will get rounded up and  finished off. Wait and see.

“OK, So what about Brexit, Reno? You came from France all those thousands of years ago, before it was called Europe – which side are you on?” 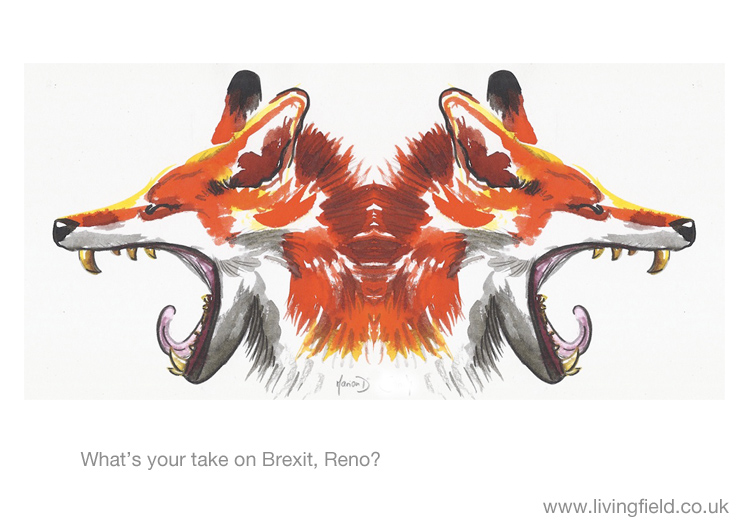 No wonder I’m the mocking fox today. Hens and ducks taste the same both sides of the water. Snare and bullet hurt the same. No need for a ballot. Raise the land bridge, then we’ll have the choice!

Reno snarls and mocks:  time for the next ice age – that’ll put an end to all the nonsense. 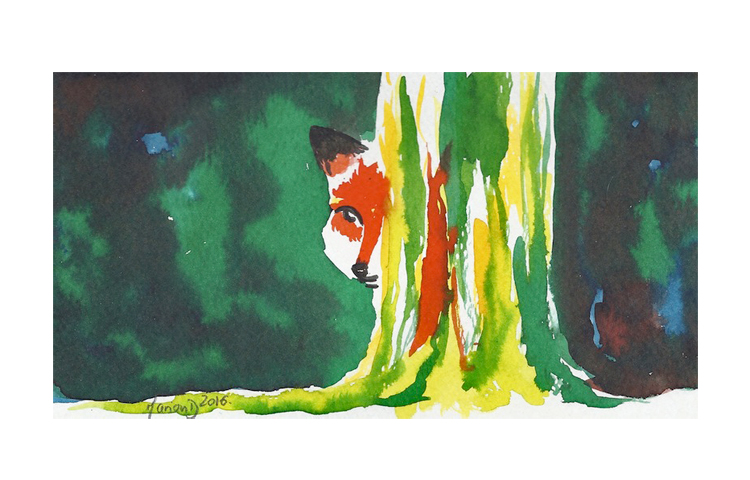 I’d be dead if they were – bullet through the head. No – it’s this great crowd of humans, loud noise and cheering, bright lights, shouting, smoke. The badgers are going nuts – don’t like the deep thumping – running around they are, holding their heads.

It’s happened before … and the humans leave rich pickings.

“Nothing to worry about Reno – it sounds like a Rock Festival. It’s that time of year.”

What’s the matter Reno – eyes half shut, hunched up, coat fluffed out, tail round your paws? 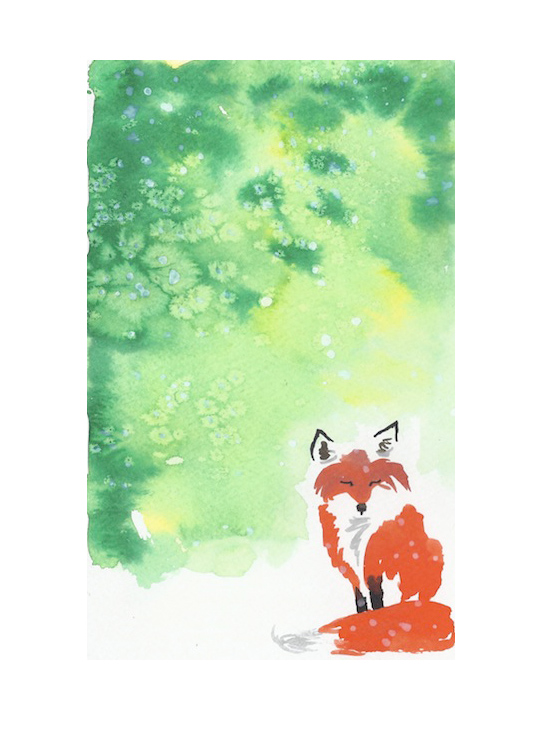 What’s that you are looking at Reno? Where is your colour – you are dark today? 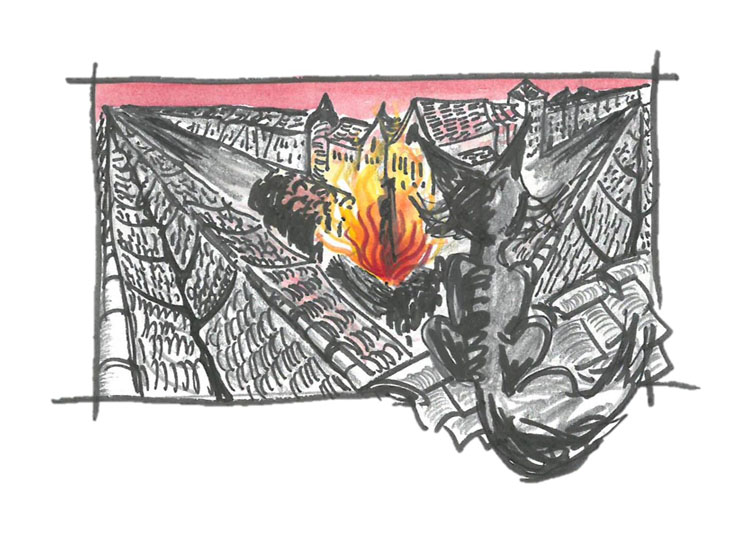 ‘It happens every year. What becomes of Grissel on this day! A darkness takes her. She wo’n’t colour me.

This day in 1669, her namesake was strangled and burnt. She does not forget. Leibniz, Brand, Vermeer – science and art! Yet they still burned women in Dundee.’

Reno! You are philosophical today?  What are you thinking about? 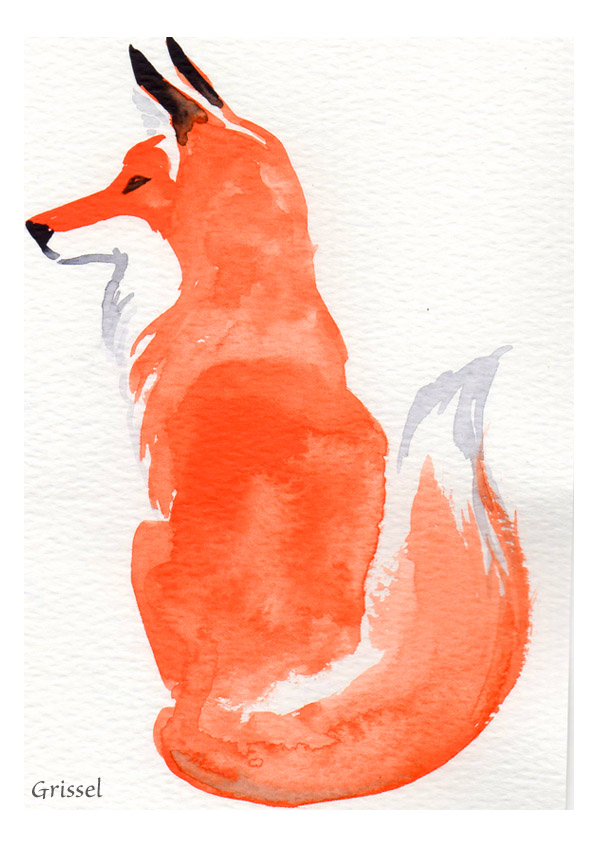 ‘You couldn’t make it up’ says Reno. ‘The way humans turn things round. Like years ago, they caught foxes and transported them,  just like they did their own kind, convicts you called them, to that place ‘down under’ where the summer is winter and the spring is very hot.  And they did this so a few people could hunt the fox with horse and hound, just like they did here.  Nostalgia, it was, for the enjoyment of tearing an exhausted fox to pieces.

‘But what an opportunity for the global fox! Did they expect them meekly to get caught? Those few went native, had babies and couldn’t be caught. And all those slow moving animals down there – what a gift – easy catching and feasting.

‘And the fox became so successful as to be considered pest  and the persecution began again. Thousands of the fox suffer but the global fox still grows.  Here’s the rub  – they blame the fox for driving some of those slow moving, meaty animals to extinction. As if the fox cares. But who’s the culprit. Not the fox.

Is that you Reno, up a tree and very angry? What are you glaring at? 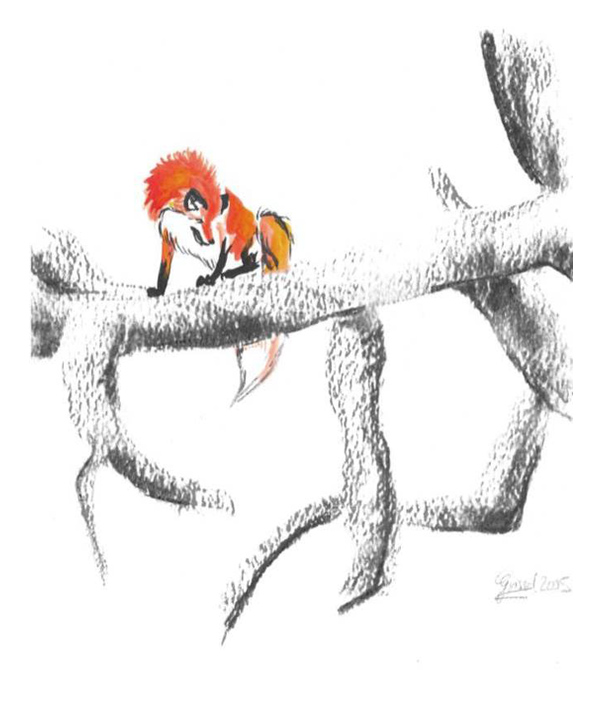 They put it there a few days ago. Carried it from the road they did and left it by some bushes.  There’s more like this scattered around the woods. White and square, with an opening, like one of your windows; tubes and wires sticking out the back.  We thought it was a trap. Maybe a cub jumps inside and the door closes?

“Sounds like someone dumped an old washing machine Reno, nothing for the fox to fear there.”

It’s 2015 and fox hunting is political again … so what’s your take, Reno, on humans hunting the fox with horse and dog? 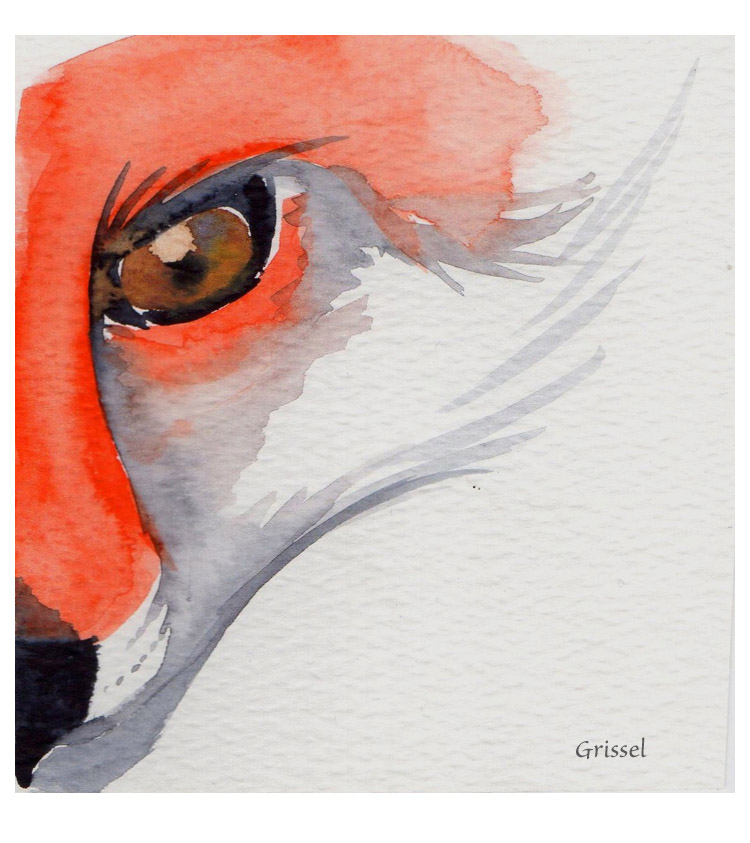 Complex one this ….  If you were the fox that was driven to exhaustion by the hounds and torn to pieces, your intestines strung out on the grass and legs ripped off while you were still alive, then you would be against hunting with dogs. But the fox that lingered for days in a trap, its body tied to its foot by threads it can’t chew through, would also have its preference.

If controlling fox populations was the aim, then humans dressed up, riding horses and with a pack of hounds, each dog much bigger than a fox, and better fed, is a bit over-the-top.  It doesn’t work that well and makes no economic sense. No, it’s a fancy-dress ritual, a show of power of one type of human over another.

There was a time maybe when humans imbued the fox with a dark atavistic force, to give substance to their fears, a force that had to be subdued, ritually. Like they caught and killed the wren – the King – it was ritual. But few think that way now.

So the fors and againsts of hunting with horses and hounds hardly concern the fox – if its not the hounds’ teeth, it’s the trap or the gun. No the arguments about control with horse and dog are about how different humans see themselves and each other.

What about badgers, Reno …. are you PC or non-PC? 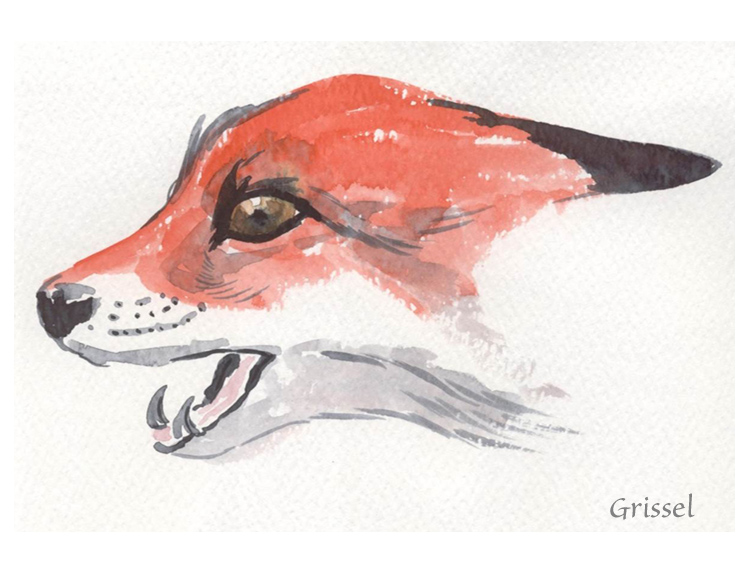 The fox kills things to eat them. That’s plain enough, no deceit. But humans deceive themselves they are doing the good thing. If anything gets in the way it’s bad.

But the badger got in the way of cattle farming.  Or at least the cattle farmers and some politicians thought it did. Modern cattle might be big beefy things but they’re jessies – all-year-round care, medication, too much imported dry meal. Some don’t even eat grass. They’re a vanity project.

Which is fine if the humans admitted they levelled the forest,  over-fertilise the pasture, pollute the streams and kill off anything that gets in the way, and they do all this because they want to and can. But to say that it’s noble and righteous to impose these beefy things and kill off the badger because it threatens them … there’s a deceit.

You are in water Reno, swimming … 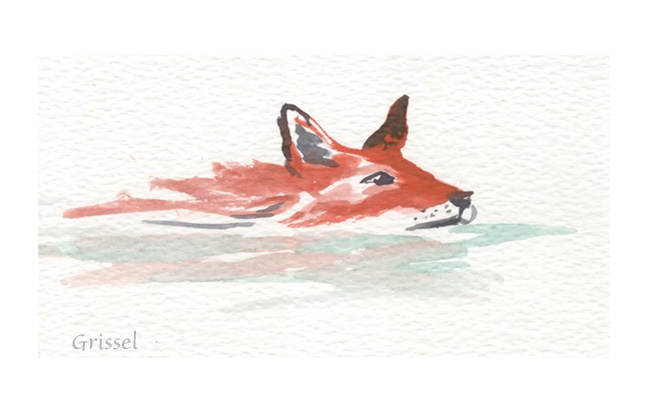 It’s time to visit that big place across the river. They trooped and boated here a few years ago, the legionaries, built their huge fortress, marched up and down looking for trouble … trouble with other humans that is. Some of them, the dominants by the looks of it, wear short skirts, carry weapons and cover themselves in lizard-skins. But they’re off it seems and the fox will see to the pickings.

The fox cares nothing where they come from and where they go. But the fox knows where there’s humans there’s ‘rats’ and even more where the humans store grain. Rats upon rats, well fed and juicy.

What about the last wolf Reno? 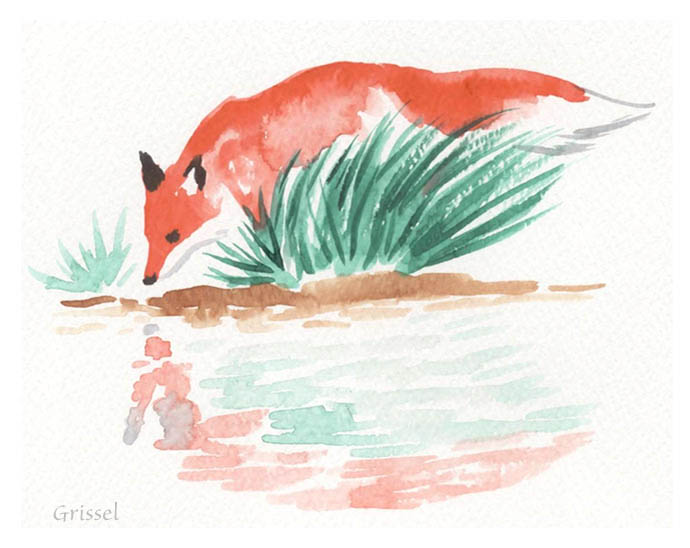 Reno is thinking …… about to drink.

No fox is sure when the last wolf died in britain. Your dates are not reliable. There would have been a few that lived longer, out of sight, starving. They probably went during your james hutton’s lifetime, but no fox knows when. The wolf caused little ill to the fox … keep a distance at the kill and we’d be alright. They didn’t cause much trouble to humans either, at least compared to what they caused to themselves. You can’t blame the wolf for the ill years and the famines, the emigrations and deportations. Here’s to the enlightenment! People finished the wolf off because they could.

The one thing that troubles the fox is, if people killed off the wolf, they could kill off the fox. It would take more effort but it could be done.

What are you looking at Reno? 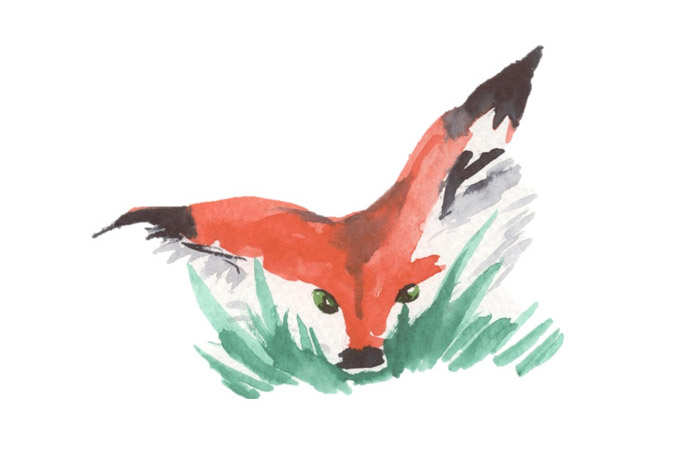 “I’ve been watching them for a few years, since they landed in their small boats. Like the hunters, but with different ways. They scour the ground, sow seeds in spring, harvest the plants and eat them.  They settle and build wood and stone dens. They keep soft bodied animals …. that don’t run too fast.

Reno muses – how will this turn out for the fox?”

A long time ago, a French fox – Renard Goupil – wandered over from France to Britain, followed the long days of summer and settled in the northern forests and tundra. That was well before France and Britain were known by those names, and before they were separated by a sea, as they are now. The fox came to be called Reno,  a witness to many things, many changes – opportunity as well as persecution. The wolf and bear have gone, yet the fox remains. Reno has a story to tell.

Here is Reno trotting along on the journey over the sea.