Plants produce dyestuffs that give deep, vibrant colours or subtle shades to textiles, paper and wood. Natural dyes from plants, and from fungi, earth and insects, have been grown and used for thousands of years, and despite the dyeing industries being overtaken by mass produced synthetic pigments, the natural dyes are still part of  many local traditions, especially in tropical and sub-tropical regions.

There is little evidence of the broad-scale growing of dye plants in the croplands before the last few centuries.  As crops they are no longer familiar here, yet the art and science of using natural dyes remains in manufactures and craftwork. 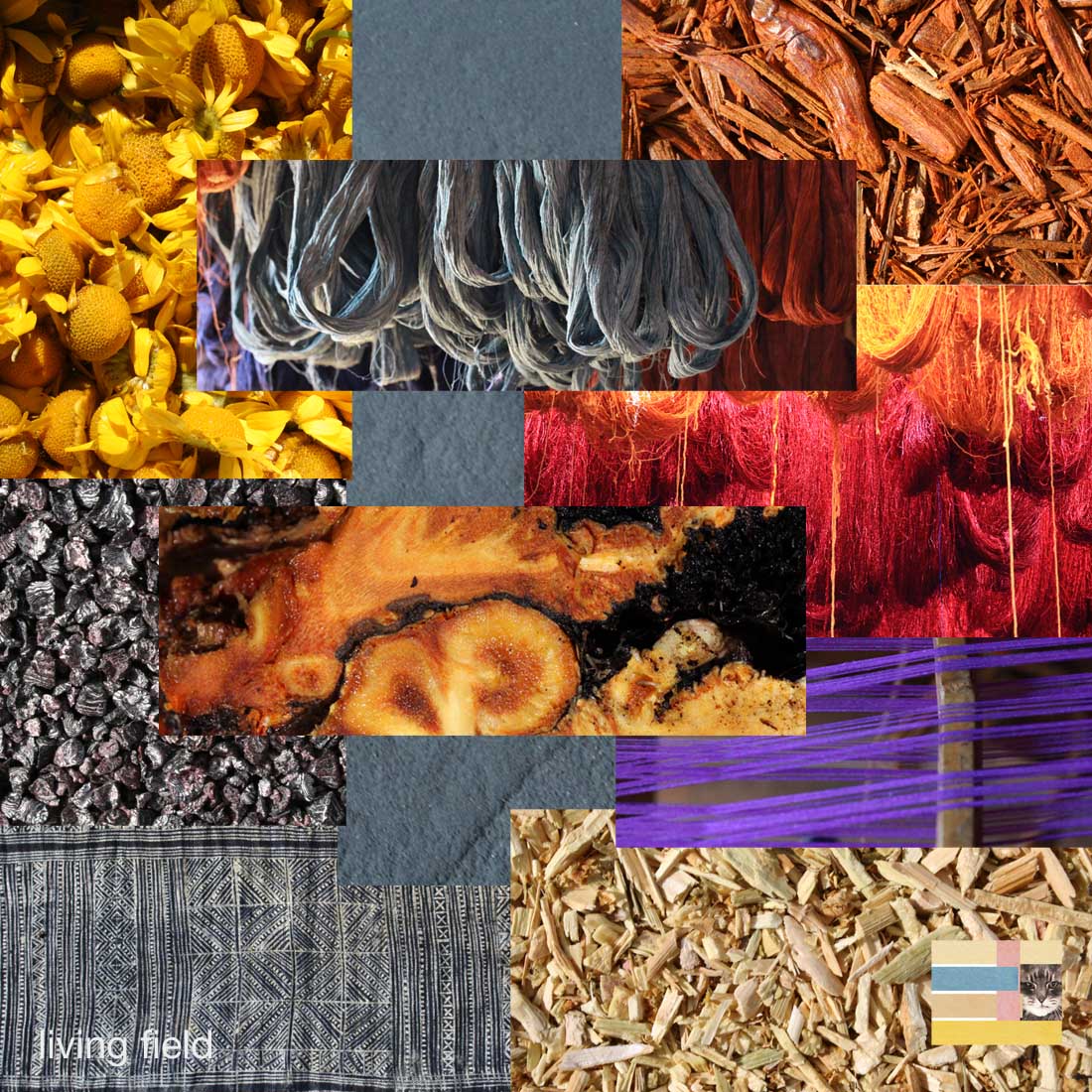 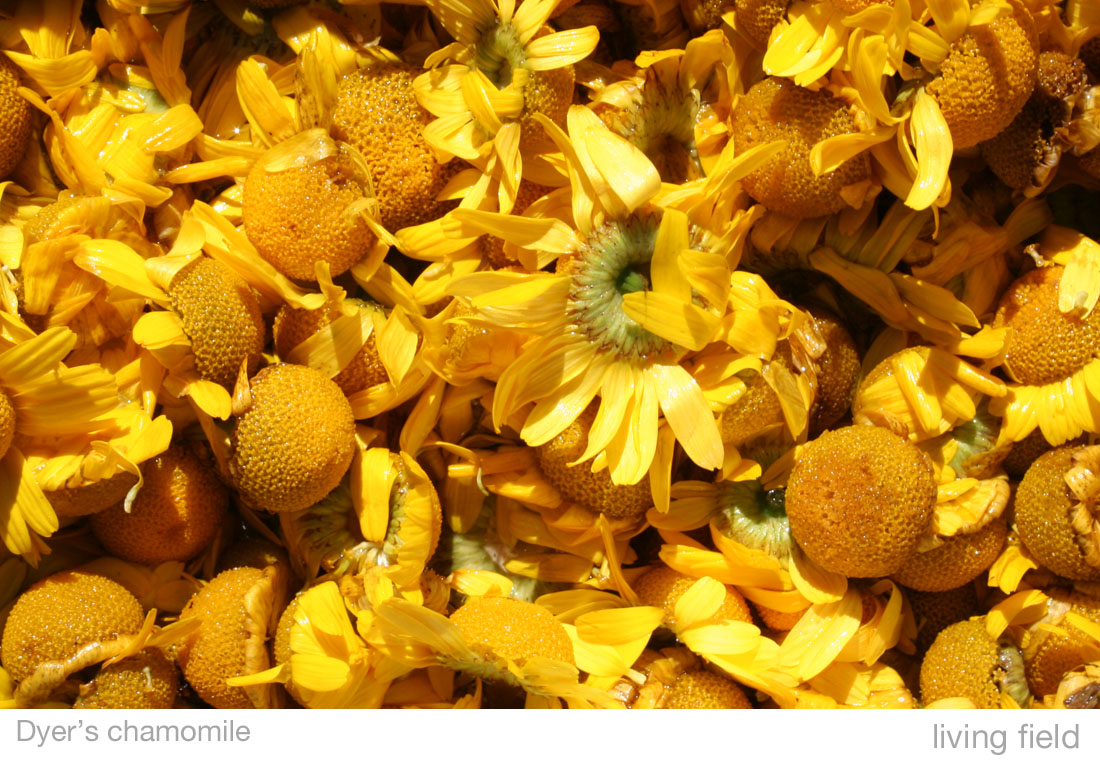 Earth pigments – mineral dyes. The ochre pigments – mostly red, brown, and yellow – trace the oldest surviving uses of natural dyes in art and craft. The ochres are found on the earth’s surface in certain types of rock.  Because they are mineral, and do not degrade like plant materials do, the ochres survive the years if sheltered in caves or overhangs from natural weathering.

Plant dyes. Colourings come from many different parts of plants.  Tap root of dock, tuber of beet, rhizome of iris, leaf of woad, stem of weld, wood of old fustic, flower of chamomile, fruit of blackberry, the whole plant of the seaweed dulce – the list goes on. Dyes are found in many plant families, but many of the main dyes used commercially for strong colour before chemical manufacture come from the legume family (nitrogen fixers) – indigo, old fustic, brazilwood and logwood among them, and our own dyer’s greenweed.

In past ages, people must have spent many years experimenting with methods to extract colour from plants. They handed down their knowledge from generation to generation. If the knowledge was lost, it would take time to be regained, since the colour of the extracted dye is not  obvious from the colour of the plant. The look of indigo or red sorghum plants, for example, suggests no trace of the deep blue and red that can be extracted from them.

Animal dyes. A further category of dyes comes from small animals. Examples include a purple from marine molluscs, various reds from oak galls caused by insects and the most widely used animal dye today, cochineal from the female of a scale insect (more at ‘Dye species of the world’ …. link to be added). 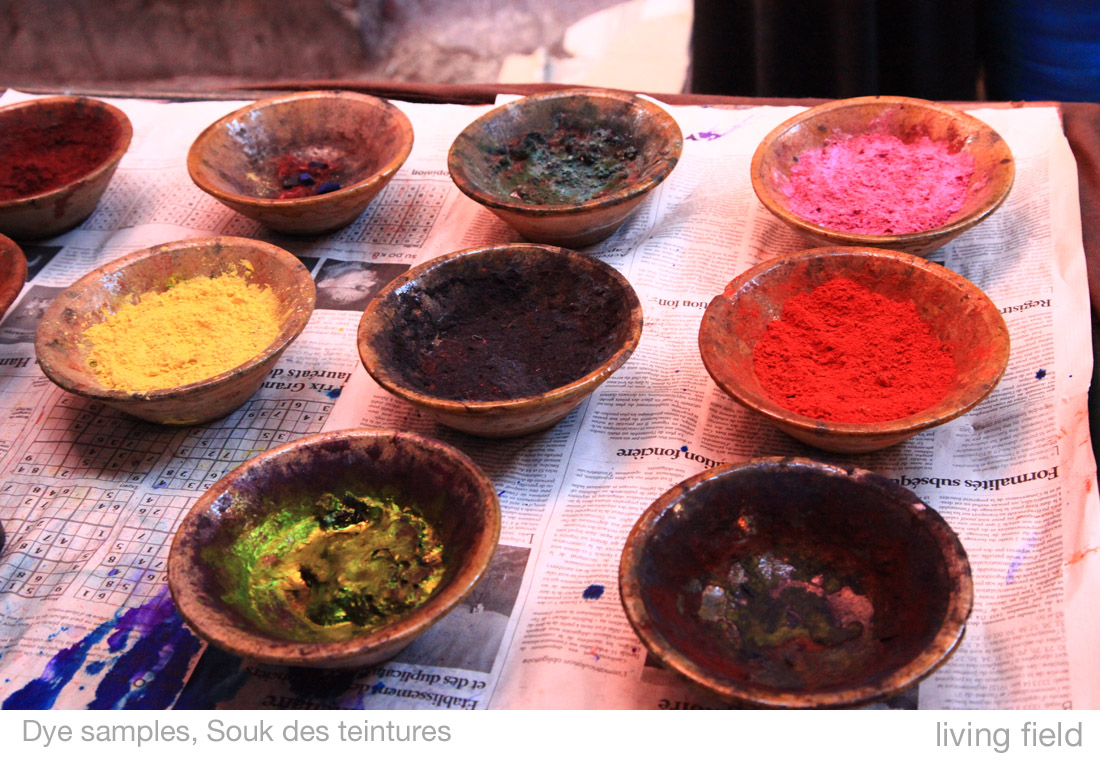 The people who first explored natural dyes all those thousands of years ago must have wanted to change the way objects looked, whether carvings, rock art or clothing. The existence of dyed material in far antiquity counters the view (too commonly held) that people were then too primitive or too occupied with staying alive to have time to think about colour and design.

The use of orchres and charcoal in cave drawings pre-dates agriculture by a long way. If the first agriculture on the european, north-atlantic coast was around 5000 years ago, the classic rock art of Europe – including that of the Lascaux caves and the Cave of Altamera was more than three times older; and if crops were domesticated 10,000 years ago, then the ancient cave paintings of Australia were more than two-times – probably much more than two times – older (Ed. the age of these paintings is under continual investigation and revision – check with the Bradshaw Foundation web site and national web sites).

Dyes made from earth pigments survive over time. Not so cloth and other materials made from wool and fibre. And but for a few occasional finds, little would be known.  One of these finds is the mummified corpses in the Qizilchoqa graves in Xinjiang, China. They were preserved due to the highly desiccated (dry) environment they lay in for around 3000 years and were found dressed in clothing of astonishing colour and style (Mallory & Mair).

The weave and pattern of that Bronze Age cloth (2000 BC) are said to be similar to those found in the cloths of Iron Age Celtic people of central and western Europe and even to the modern plaids and tartans of Scotland (Barber). The hypothesis has been proposed, though not proven, of a direct line of transmission from the originators of the Bronze Age twills to modern tartans.

So from all this came a knowledge of natural dyes that was handed down to recent centuries, when some of it was preserved in written form and still pertinent today for those wishing to explore our botanical heritage (see the Ciba Review on mediaeval dyes).

Dye plants in the croplands – crops and wild harvesting

Not much survives of the history of plant dyes in our locality at the time of farming.  Many plants that are known now to have been used for dyes have lived in the region since well before farmers arrived here.  Iris, oak, tansy, greenweed, dock, lady’s bedstraw, dulse and other seaweeds – all harvested from the wild at some time to dye woollen and other fabrics.

Yet little is known of whether these plants were actually used to make dyestuffs in stone and bronze ages.  Certainly, they were used as such in recent centuries, often at  craft scale – an ethnobotany that had almost been lost by the early  1900s.

The three main commercial dyes of the croplands over the past few hundred years are woad, madder and weld, giving blue, red and yellow colours. None was grown over large areas – they were tried and found too difficult, or else the dyestuffs could be imported more cheaply from further south or overseas. In the last 100-150 years they were replaced by tropical dyes, such as indigo for blue, but then the tropical dies were supplanted by industrially made chemical pigments.

All three of woad, madder and weld can be grown in our climate – the woad is like a tough cabbage, madder a climbing, sticky relative of the noxious weed cleavers and weld is more often seen as a short-lived plant of industrial sites and waysides. 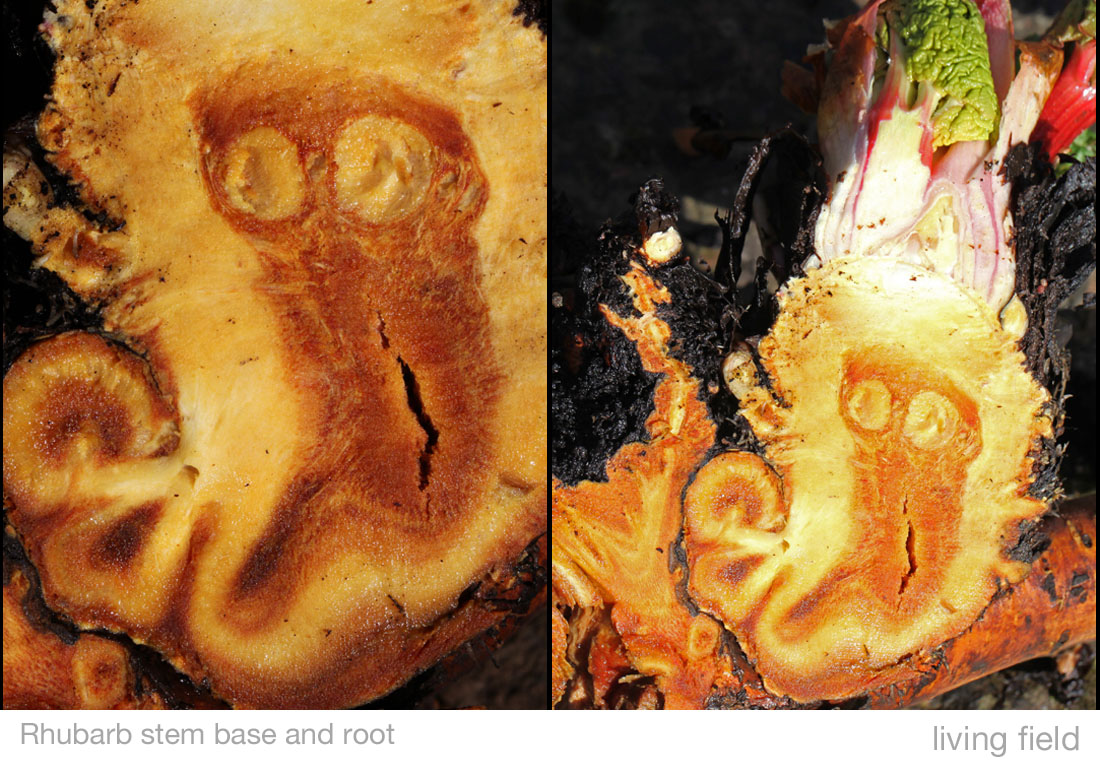 Natural dyes in the modern world

Though commercial growing of dye plants ceased in Britain, the use of natural dyes has remained. There is a growing interest and a craft market, especially in dyed fabrics that can command a price for being exclusive, local and natural.

Unlike fibres which, except nettle, are difficult to find and extract in the croplands, many dye plants have remained common in hedges, copses, fields, waterways, seashores and marshy land. Most people no longer realise their uses (or even that they are there), but they are a rich source of interest for people who want to find.

Of all the plants examined in 5000 Years, dye-plants are the most common, easily harvested and easily processed. In most instances, the plant material can just be cut into small pieces and boiled. The dye can be used straight away to colour paper or cloth, or  more skilfully with a mordant to make the colour stick.  (More at Sources … ).

The 5000 Years Dye Plants pages continue at ‘Dye plant species of the world’ …. [link to be added], Dye plants in the croplands and Sources references links contacts. 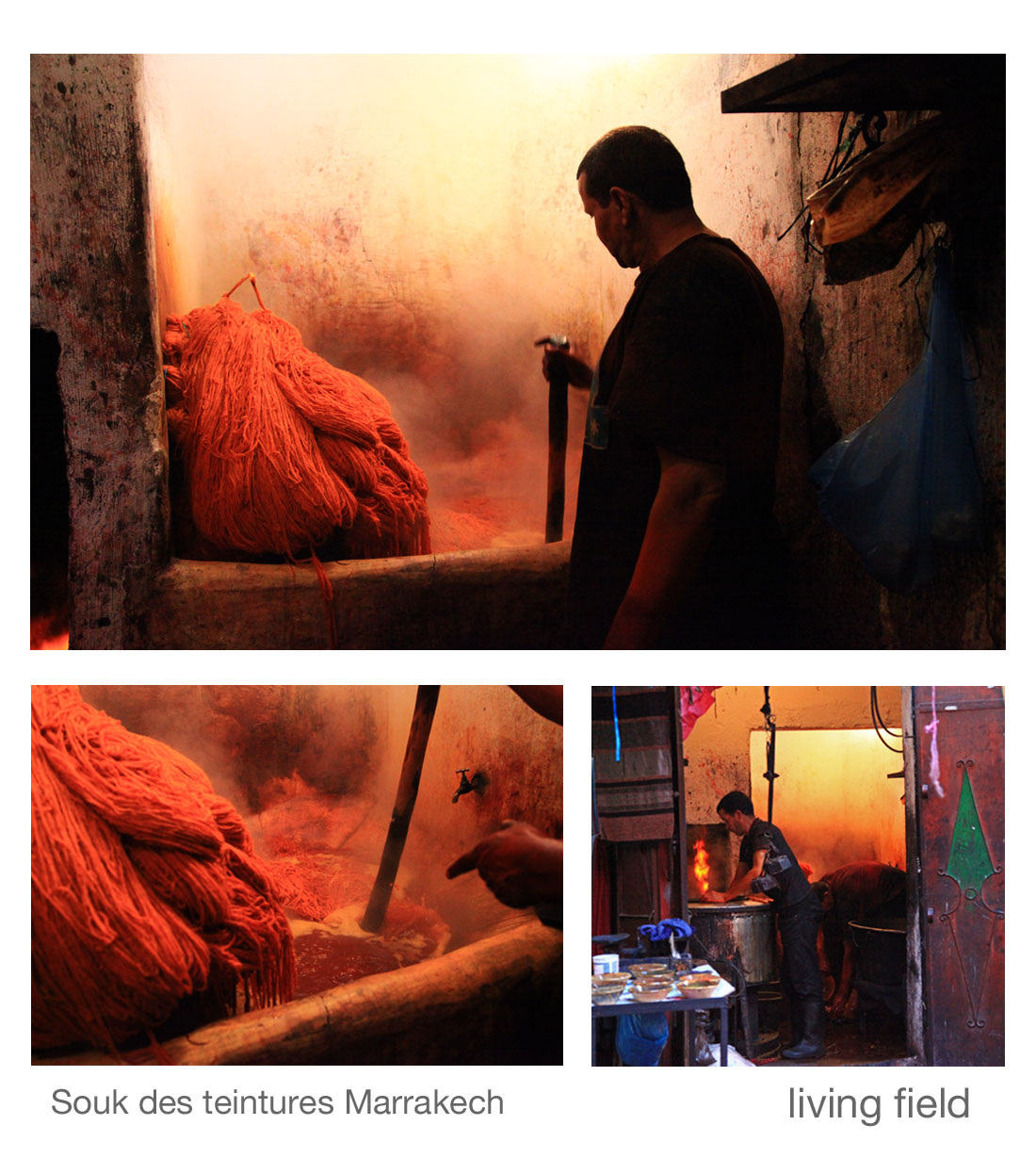