A survey of crops and croplands – from domestication 10,000 years ago, through the arrival here of settled agriculture in the late stone age; through the developments of bronze and iron to the ill years of the 1600s; through the major improvements in the 1700s that gave hope; through the technology of the 1900s that eventually removed the threat of famine; to the subsequent choice between sustainability and exploitation, and society choosing the latter; to the present state of soil degradation and reliance on imports for food security; and to a sustainable future, perhaps … with some tales along the way of life and farming when horse was the quickest way along the A9.

Settled agriculture is a recent experiment in human history. Domestication of crops from wild plants, as recently as 10,000 years ago, produced the wheat, barley, maize and rice that we know and eat today. Maize and potato were domesticated in the Americas and could not cross the Atlantic at that time and rice was too far away in Asia, but wheat, barley and oat came by land and sea across Europe to the north Atlantic seaboard where around 5000 years ago, they found a welcoming soil and a mild climate.

The grain crops enabled a settled society. In good years, there was food to last the winter, giving time to think and make things. Stability allowed people to learn the skill and enterprise to trade in the new technologies of bronze and iron that came across Europe centuries later. Waves of migration, Celts and Romans included, caused no great change to the basic type of grain and stock-farming of the region. A neolithic farmer, teleported here for the day, would recognise our crops and farm animals (except neeps and tatties which weren’t here in their day).

Yet time, ignorance and oppression took their toll: centuries of misuse, the principles of soil fertility unappreciated or ignored. Soils exhausted and yields dropping to subsistence levels. Agriculture unable to cope with the run of poor weather in the late 1600s? Starvation and famine.

Then came the age of improvement after 1700 – lime, fertiliser, turnips and other tuber crops, the levelling of the rigs, removal of stones, drainage, new machines for cultivation, sowing and harvest, the global search for guano, the coordinated management of crop and stock – benefits that allowed outputs to rise in the 1700s, but not yet to the point where famine was memory. That came later. It was not until the technological developments of the 1900s – industrially made and mined fertiliser, pesticides and advanced genetic types – that the threat of hunger was finally dispelled from north-west Europe.

But these same technologies opened the way for excess and instability. They encouraged the breaking of two established links that had held cropped agriculture since it began here.

The first was that grain and other crops no longer relied on grazing land or grass crops for manure. Grain could be grown more frequently, on more area and with more inputs – eventually encouraging a phase of intensification after 1950 that increased yield but in many places to the detriment of soil and the wider environment, and now with a diminishing return from inputs.

The second was that local production became separated from local consumption. The increasing wealth and global trade of the 1900s – the legacy of the industrial revolution – meant that people no longer relied for their subsistence on what was grown in local fields. This second decoupling became so great that by the 1990s, all cereal carbohydrate eaten in Scotland, except oat, was grown elsewhere and imported.

There are some big questions therefore. Will intensification continue to degrade soils and even start to drive down output? And is our food supply now too vulnerable to external influence – disruption by global terrorism, variation in world cereal harvests, future phosphate wars and volcanic eruption?

So what of the future! Yields are still high. Agriculture is diverse and diversifying in its margins. But threats to soil and food security will increase and need to be tackled. Technology alone will not solve the problems.

The speaker illustrated his talk with some ancient cereals and a bag of grain, all grown in the Living Field garden.

The quotations from Andrew Wight’s journals from his travels by horse are now available free online:

Wight, A. 1778-1784. Present State of Husbandry in Scotland. Extracted from Reports made to the Commissioners of the Annexed Estates, and published by their authority. Edinburgh: William Creesh. Vol I, Vol II, Vol III Part I, Vol III Part II, Vol IV part II, Volume IV Part II. All available online via Google Books.

His notes on bere, oat and flax in the region of Dunkeld and Birnam will appear in a later article on this web site. Any further enquiries: geoff.squire@hutton.ac.uk 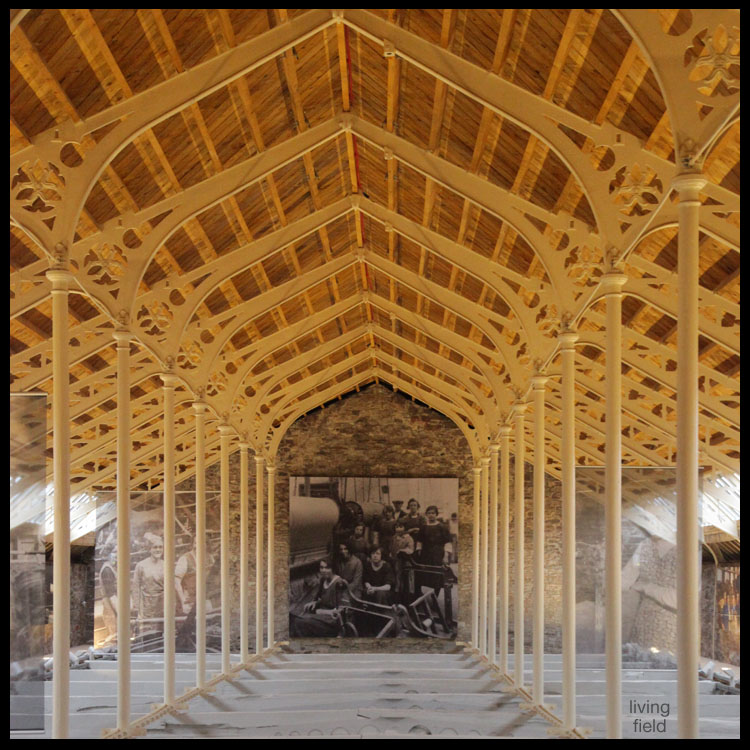