The fourth cross-quarter day is in the first week of November, mid-way between the autumn equinox and the winter solstice. A time of contrast and uncertainty – brown waterlogged soil, cereal stubble, bright fruits and russet leaves, and winter on the way. Light is ebbing now, towards the low point at the winter solstice.

The sun’s energy has been falling rapidly day by day since the autumn equinox in September, and is now not much above what it will be at the winter solstice in six weeks time. There is hardly the energy to dry wet leaves, never mind waterlogged soil.

Yet heat is retained in the earth and in the seas, and temperature is reluctant to fall too quickly.  It’s the time of year when air temperature lags farthest behind solar income. There can still be warm afternoons as well as night frosts. In 2015, recent weeks experienced a record high temperature for the time of year in some parts of Britain.

In the croplands, the trees are turning, but the overnight transitions from greeny-yellow to flaming red and russet are uncommon here. Early November … and the oak can still be still browny-green, the ash yellowish, the beech variable from yellow to russet (image below) and in some years only the rowan turns a deep red. 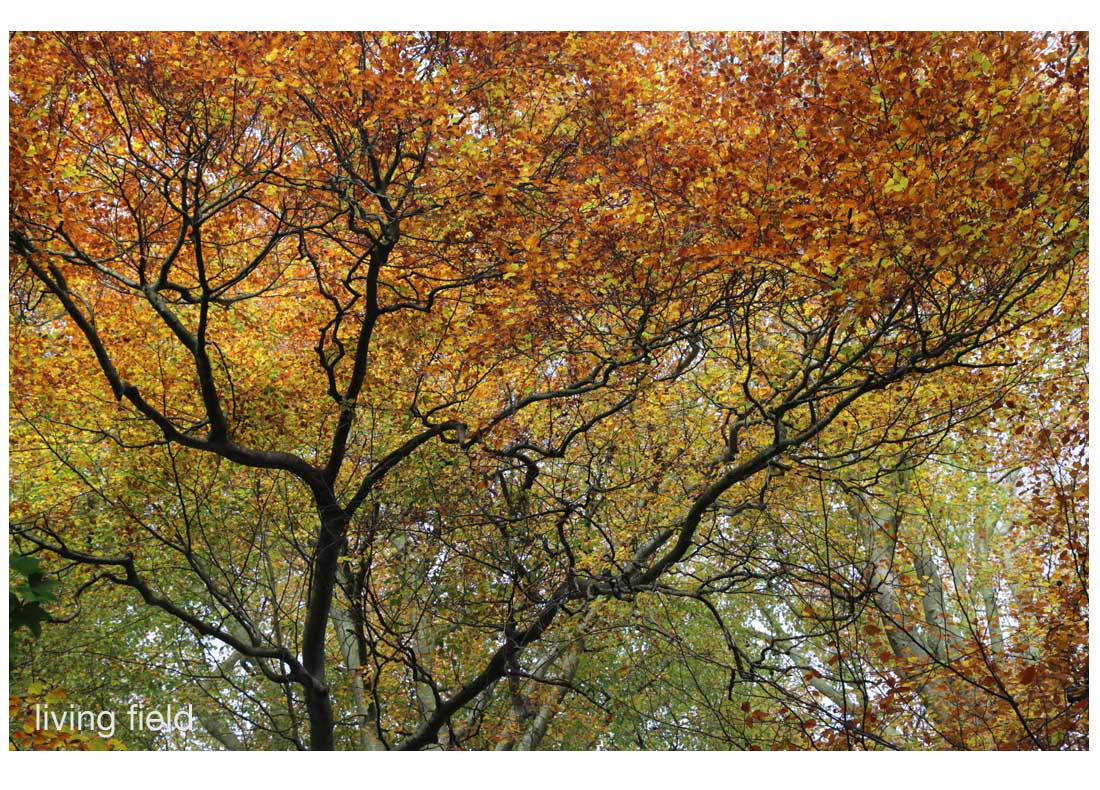 Source graphs at The Year explain how the sol-temp graph was derived and examples of the day to day variation.

The last cross-quarter day before the winter solstice and, despite the summer’s remaining warmth, day is much shorter than night. 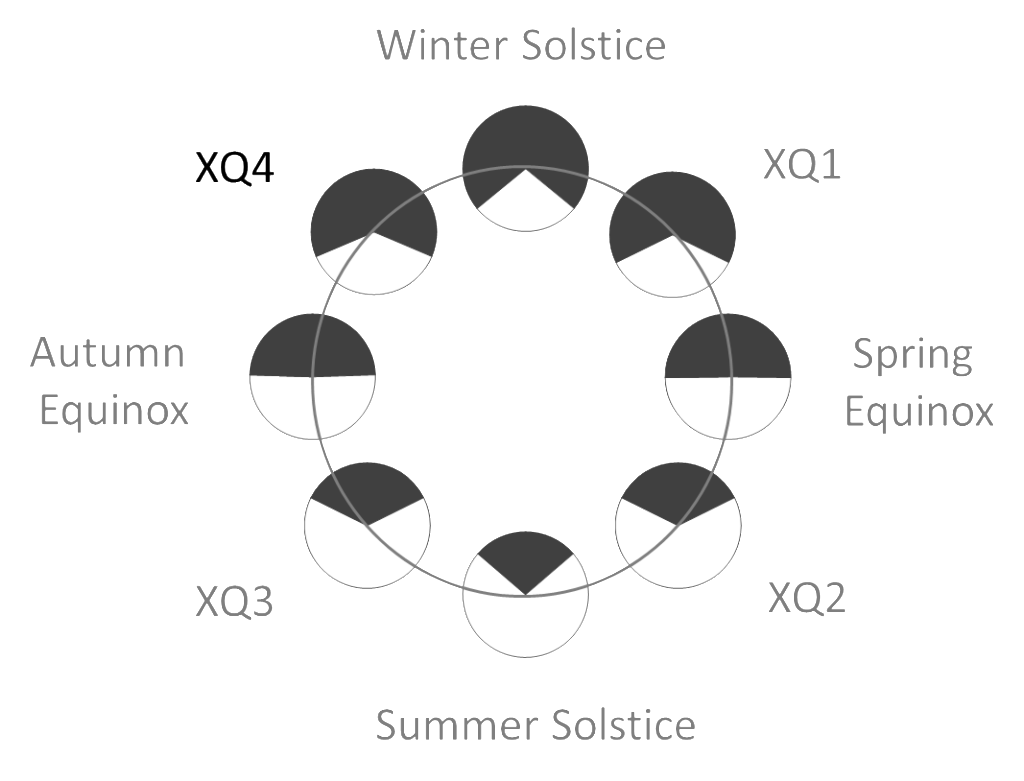 By early November, farming should know its harvest for the year. The first settlers in the neolithic would know now if they and their animals would last out the winter. And this was the same for much of the next 5000 years. Only recently has technology and science assured a decent harvest in most years, and even more recently allowed the import of enough food from high-yielding lands elsewhere to make the autumn cereal yield here almost irrelevant for food security (though still valuable for other needs!).

So whereas the first farmers were gauging their chances of surviving the cold, modern farming is already preparing next year’s crops.  The winter (autumn-sown) varieties of barley, oat and oilseed rape, and all but a few of the wheat, are in the ground, and by late October most are emerging to cover the soil in a thin layer of green.  The modern winter varieties are hardy and well able to survive the coming months of frost and snow. Yet the sown crops are still the minority:  much more than half the fields at XQ4 are ploughed or in stubble and will not be sown until March or April next year with spring cereals and potato.

The ‘roots’, the swedes and turnips, the potato, and the vegetable forages, are still green, waiting to be harvested or to be eaten by stock over the winter and into spring. The arrival of ‘root’ crops 300 years ago in the northern croplands gave farming and those that depend on it some well-earned security. Vegetative crops do this the world over. They reduce the reliance on flowering and seed set in the grain cereal.

So why have roots and leaf forages, except the profitable potato, declined in planted area in recent decades? They can be imported from elsewhere of course. But maybe the main reason is the availability on international markets of concentrated or high protein animal feed, much of it from South America. Why bother growing ‘roots’ when you can buy another’s natural capital?

Many of them – an important time in the year, most harvests in and six weeks before the winter solstice.

Guising (going about in disguise) is recorded in Scots in the late 1500s and 1600s, when it was frowned on by some authorities. Entries in DOST include ‘Nycht walking and guysing forbiddin’ (1598), a man accused of ‘guizing and that in woman’s habit’ (1662), and several men had up for ‘guiseing, one of them in women’s apparel, one of them in straw, and the rest with false faces’ (1667). Sounds familiar, but there is little evidence of the time of year at which these events occurred.

Elsewhere in the world?

It’s not as wet and chill everywhere. Some places have sun and heat this time of year.

If ‘Dundee was Africa’ – in the Michael Marra song from the play The Mill Lavvies – then Aberdeen would be ‘under the mediterranean Sea’, and that would be too difficult to photograph on a budget. So to keep the feet dry, we begin with a sight, which in the geography of the song is probably somewhere near Lochee, but in reality is in north Africa. It’s the Palmeraie just outside Marrakech, Morocco. 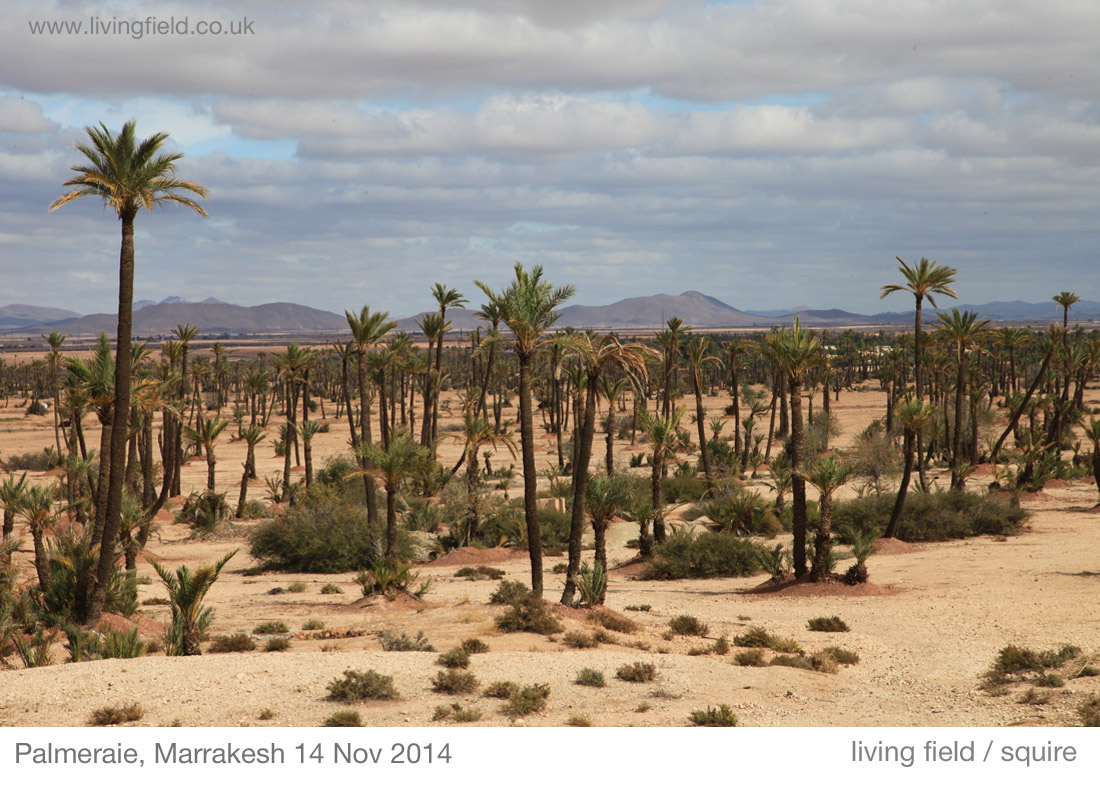 It is hot there in November (by north Atlantic standards), and dry too, and this oasis of former times looked under the weather, the date palms sparse, afflicted by disease and growing in a compacted, eroded soil.

Yet there were signs of local rehab, signs of reconstruction, an attempt to reverse the slide. For more, see this UNESCO sponsored 2004 workshop.

Large parts of cultivated Australia are similar to north Africa in being old continents, with old soils that have lost much of the nutrients that plants need for growth. The use of phosphate fertiliser reversed a general decline in yield in the 1800s but water still limits the cereal harvest in many years. 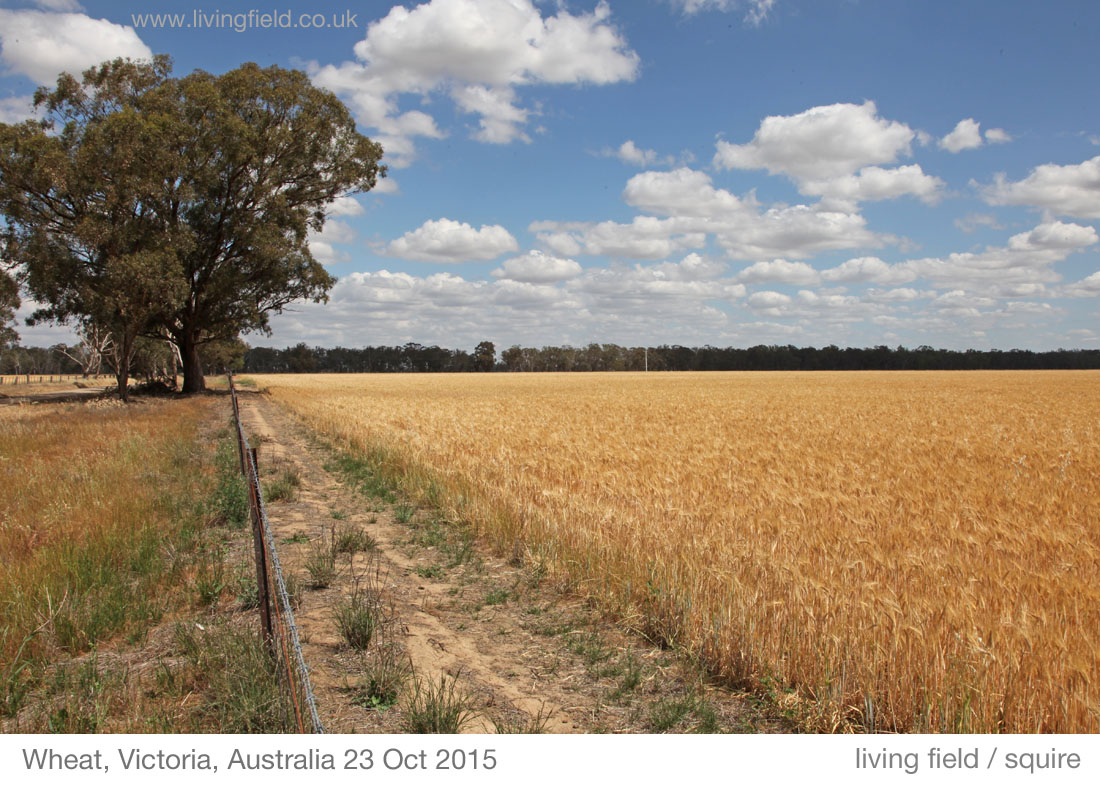 Lack of water was limiting this field of wheat in Victoria. It was little more than  a foot tall. Yet the standard of cereal agriculture here is high. Grain yield per unit of water or fertiliser used by the crop is higher than in many  parts of the world.