In the centre of Athens, the hill of the Acropolis and its surrounding slopes, the Ancient Agora immediately to the north and the hills to the west and south west, form a landscape unique in the history of European culture and architecture. The landscape is distinguished by the ruins being set within a vegetation of largely local trees, shrubs and flowering herbs.

There is little here of the forced lawns and flower beds usual of museums, parks and historical sites. Near some of the ancient stone, rank grass is strimmed to keep it in check, but the excessive manicuring of formal gardens, with its inevitable excess of fertiliser, pesticide and disturbance to the soil is largely absent.

Naturalness here is is aided by the climate: the summer heat and drought reduces the herbs to straw and constrains and hardens the trees and bushes into compact hemispheres and cylinders. But there is evidence that wild plants are not only tolerated, but encouraged to adorn these sites.

In the Ancient Agora, which stretches from the north west slopes of the Acropolis to the old part of the city, laying out the remnants of an astonishing classical history, a display board states that after excavation in the 1950s, ‘native plants, which were already known in ancient Greece, were chosen for the planting’.

And it works. From the cafes lining the metro cutting along the northern boundary, the view across the Ancient Agora to the hill of the Acropolis perfectly blends the ancient worked marble with cypress, pine and olive.

A similar philosophy guided the restoration of the hills of Philopappos, Pnyx and Nymphs that lie to the south west of the Acropolis. While photographs taken about 100 years ago show the land to be largely denuded of tree cover, the 1954-1958 restoration reintroduced vegetation to complement the access paths, old roadways and remnants of protective walls.

The architect responsible for the restoration, Dimitris Pikionis (1887-1968) ‘stressed the appropriate planting of the area with small plants and bushes from Attica’, the local flora. Links to web sites on the ideas and legacy of Pikionis are given below. 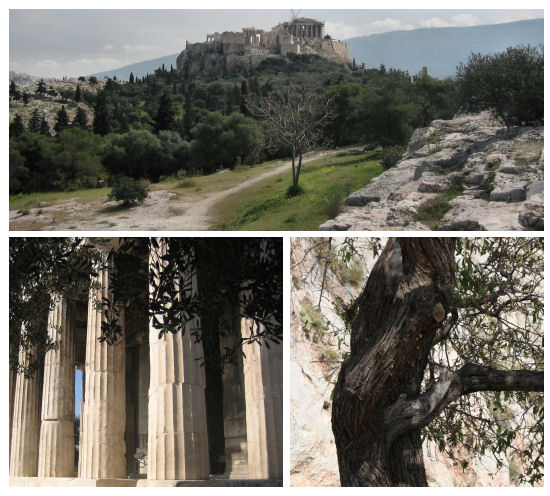 While treading these slopes today, the uncloistered mind can imagine Socrates expounding beneath an old black olive tree, a tired labourer nibbling for comfort on a henbane seed and Aristophanes, impatiently lashing out at a patch of coreopsis, waiting for his actors to turn up for a first night at the Theatre of Dionysos.

Photographs and text: Living Field or as stated. A version of this article was published on the original Living Field web site (same author, same images).

Monuments, landscaping and walking routes
Archaeological promenades around the Acropolis. A series of seven booklets. Published 2004 with subsequent editions. Authors indicated in each booklet. Helenic Ministry of Culture and Association of Friends of the Acropolis.

Aixoni Project dedicated to the virtual representation of the architect and painter DP [2014_11_12: original weblink broken – new link to be inserted. GS]

Links to related material on this site 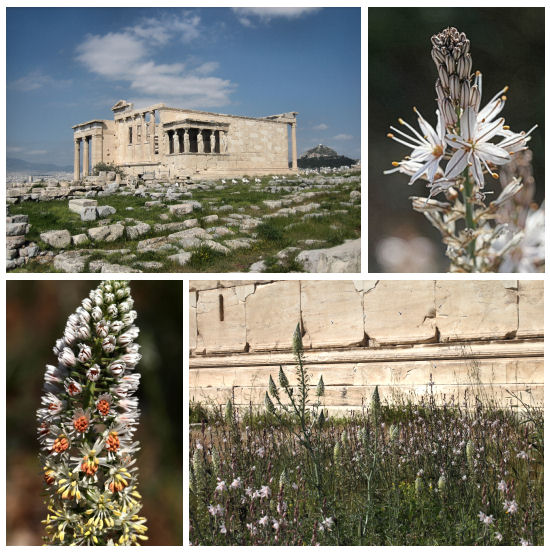