Farmland has been losing its wet habitat for decades through over-zealous tidying and pollution by fertiliser and pesticide. Yet even small ditches and ponds give refuge to plants and animals found nowhere else in the croplands.

Are everyday countryside ditches and ponds a thing of the past? It seems they are rare – the garden’s 10 metres of wet ditch running into a small pond no more than two square metres in area have been visitors’ favourites since they were created in 2004. Children see tadpoles and frogs here for the first time.

Here are some of the plants of ‘pond and ditch’, mostly native, all perennials, leaving  dead leaf and stem for the winter then reappearing bright and green in spring. We begin with two favourites living in the upper (drier) part of the ditch and attractive to a wide range of insects.

Meadowsweet Filipendula ulmaria lives in the ditch and on the bank right next to the hedge immediately to the south (left hand side of the photos below). It brings the sweet smell of its blooms in summer; perhaps the first source of ‘aspirin’ before the drug was extracted .

Hemp-agrimony Eupatorium cannabinum a resilient perennial living alongside the meadowsweet, possibly planted ten years ago elsewhere in the garden but migrated to this wetter habitat (See the page on Bee plants for more photographs of its flowering heads). 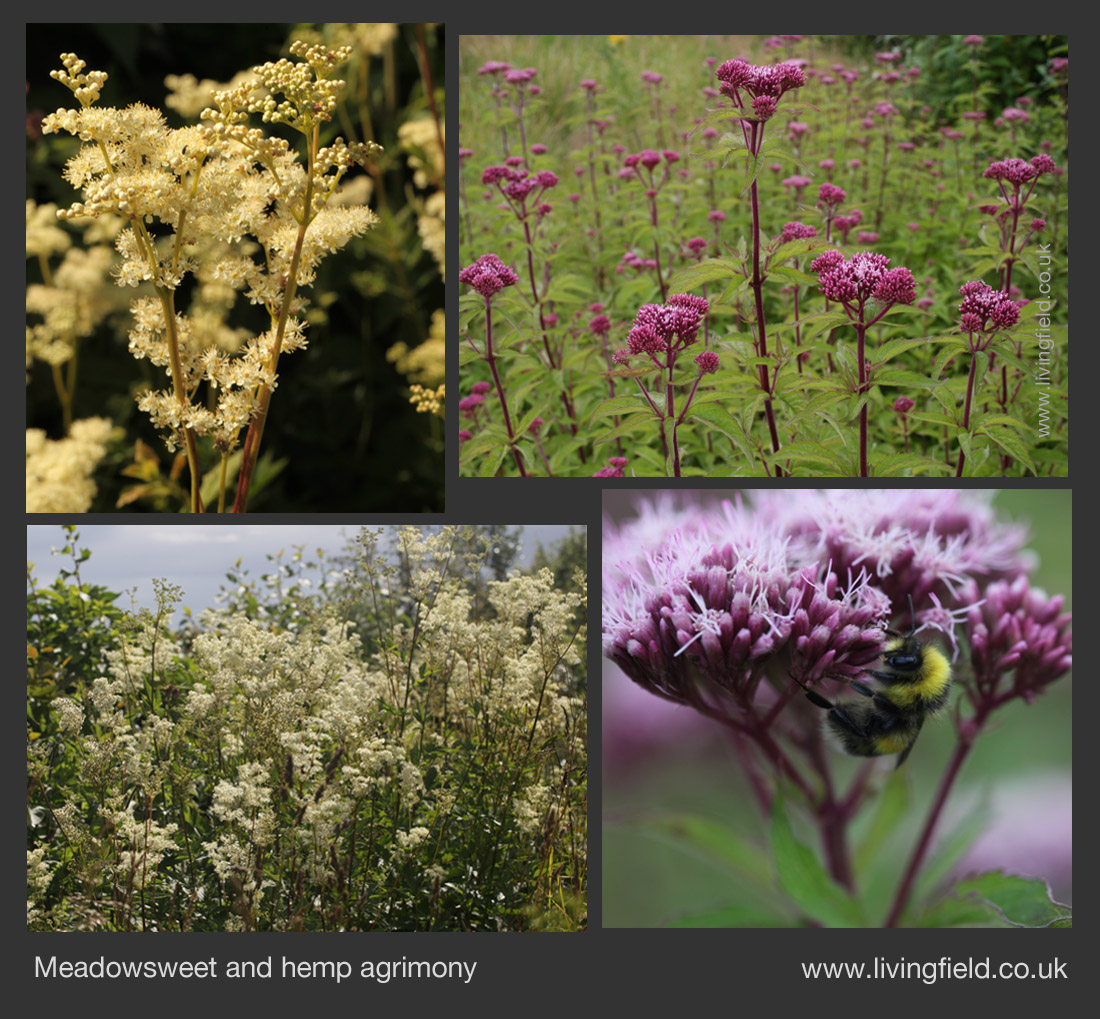 Marsh marigold Caltha palustris, one of the buttercup family, a perennial planted between ditch and pond, one of the first plants to flower, the brightest of yellow against a dark, deep green. This plant descending from one rescued from a northern farm bank and planted here ten years ago. More on the  Marsh marigold page

Images below show stem, leaf and flower structure (top left), position of the single plant on the edge of the pond next to bulrush, and flowers displaying the many (male) anthers typical of the buttercup group. 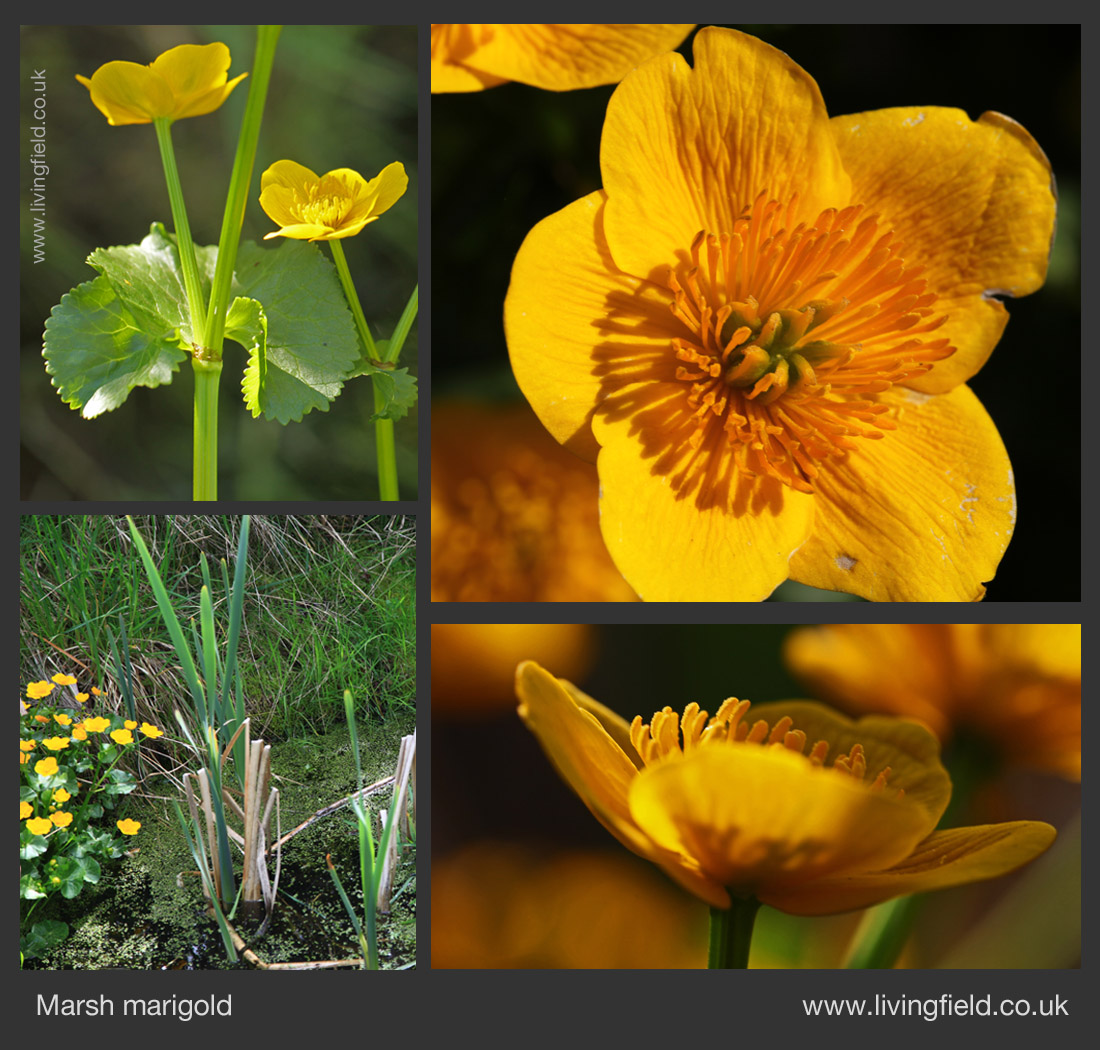 Ragged robin Lychnis flos-cuculi is a deceptively resilient plant, related to the corncockle and the campions, putting out its few stems and flowering heads each year in the ditch where the grass is not too thick.

Marsh woundwort Stachys palustris appeared in rank grass near the pond, probably finding a suitable habitat through its own efforts; without the foetid smell of the the hedge woundwort and with more noticeable pinkish flower spikes.  (No longer present in 2018). 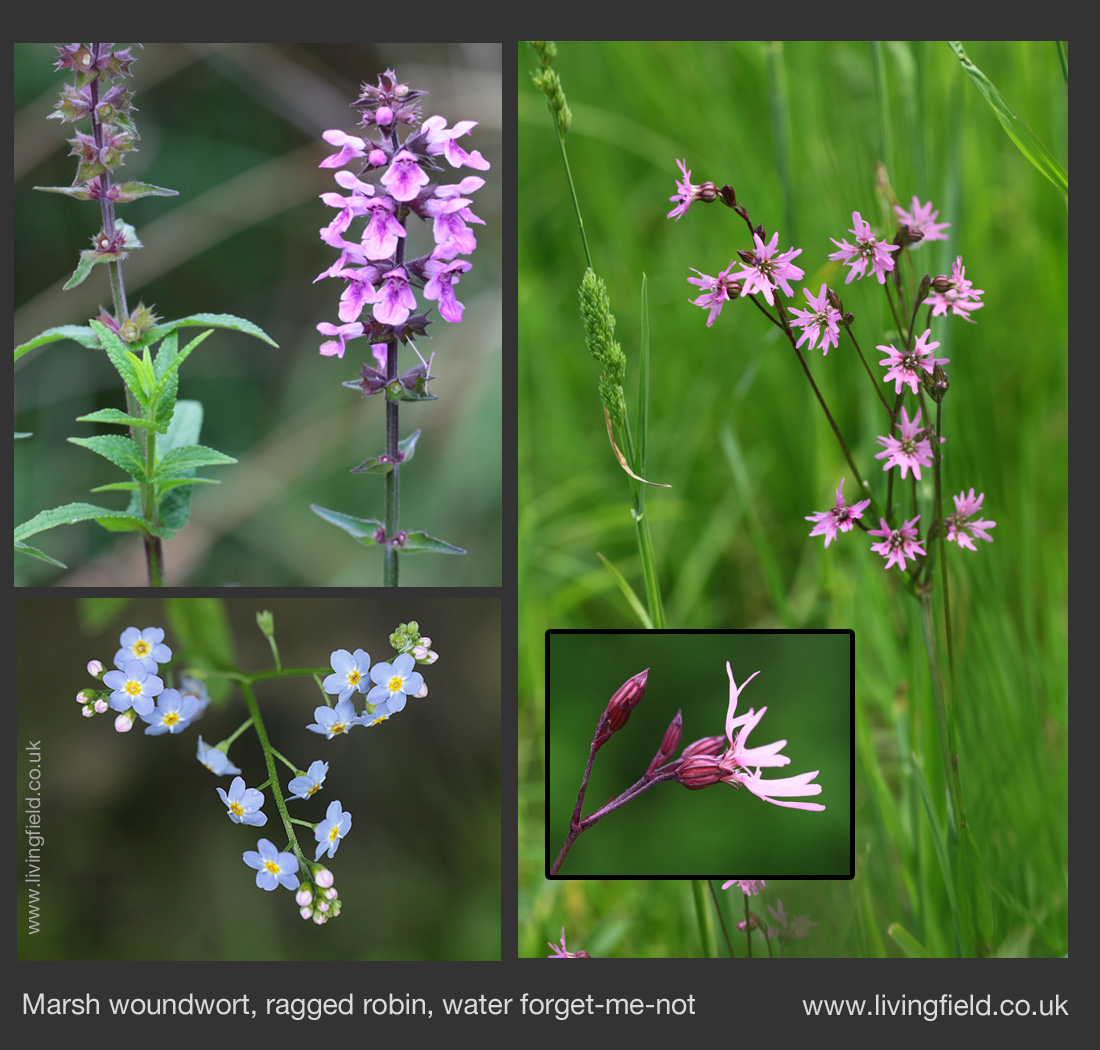 Bistort Persicaria bistorta from the same family as the annual persicaria weeds, but sedentary here, putting out its fleshy-looking leaves and pink flower spikes (left hand side of the photos below). Not common in the croplands, this plant descending from one found in a east Perthshire hedge more than 15 years ago.

Bulrush Typha latifolia, transplanted to the pond here from the Balruddery Farm mill pond, sends out its tall spiked clubs every year. When the plants got too big and had to be thinned, many frogs were found over-wintering deep in the safety of the roots. 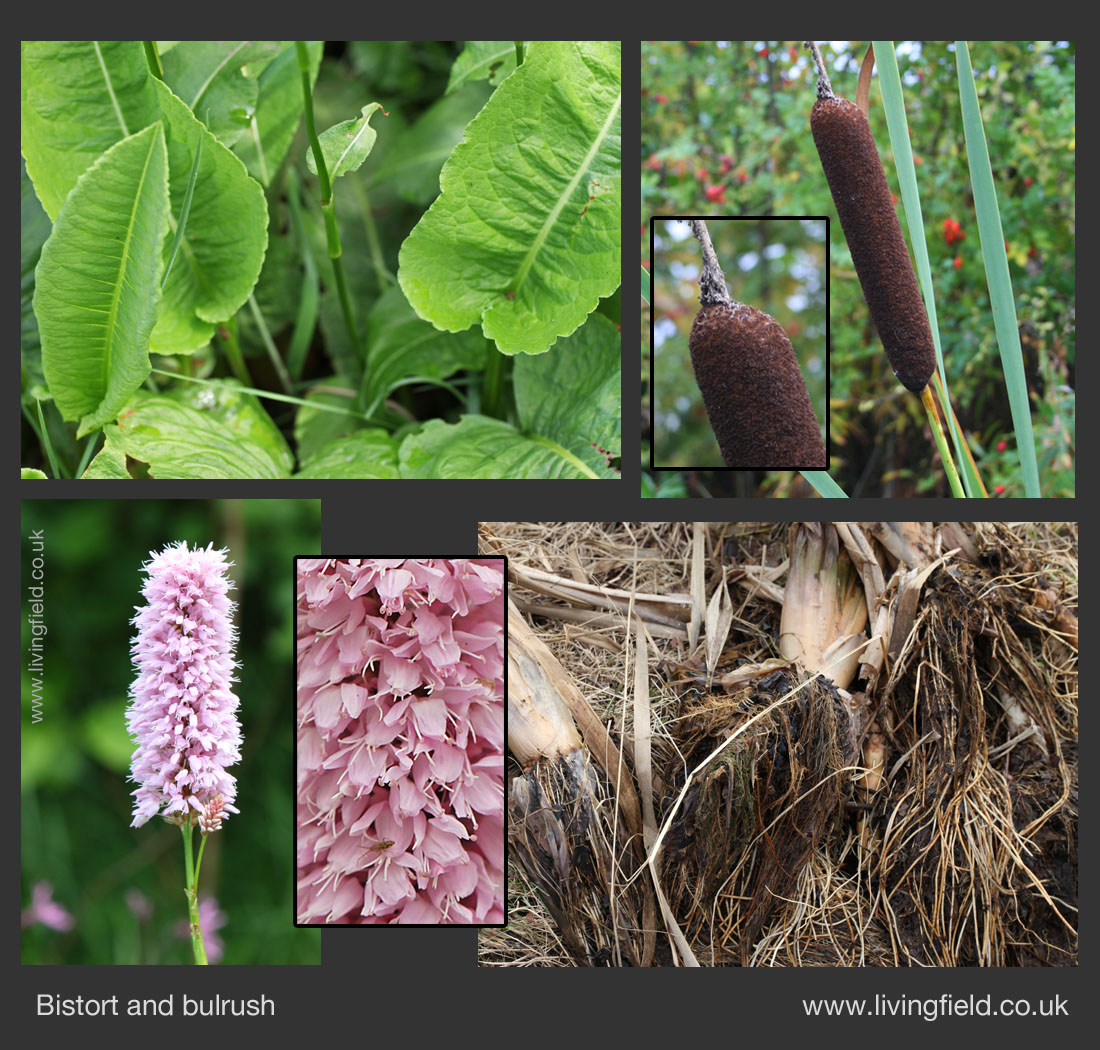 Wild garlic or ramsons Allium ursinum was planted a few years ago on the bank above the ditch, and under the trees. The plants were ‘rescued’ and now are happily established. They put out leaf early in the year and flowers in late April and May (no images).

Yellow flag Iris pseudacorus overwinters as thick rhizomes, from which its green blades emerge as early as March. It pushes out bright yellow flowers in summer, turning into seed-bearing capsules that split in late autumn to show bright shiny brown seeds (images below).

Melancholy thistle Cirsium heterophyllum usually prefers damp ditches but will grow on drier ground. It arrived in the garden by accident more than ten years ago in a seed packet which was bought as and labelled ‘greater knapweed’. It soon established itself, demonstrating its power of underground invasiveness.

Hardly spiny overall compared to the two common weedy thistles and with larger more attractive composite heads, its leaves persist, dead on the soil over winter and have light undersides . Plants were moved to the ditch in the hope that the meadowsweet and hemp agrimony would keep them in check. 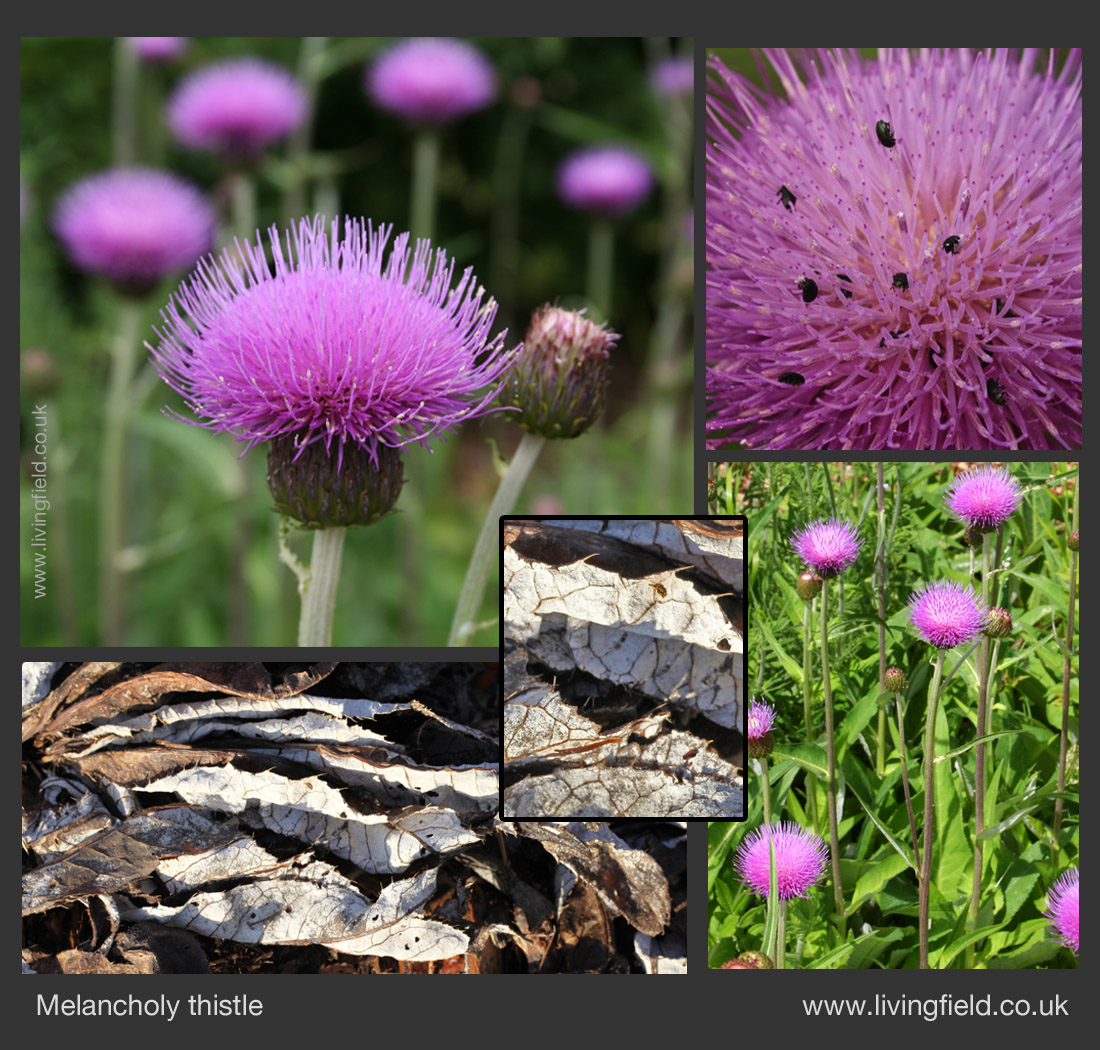 Like most composites, the heads attract a range of insects – those in the photograph above right were feasting pollen beetles.

The pond and ditch were constructed at the south-west of the east section, in a corner bounded by mixed-species hedges and sheltered to the north by trees. The original construction is shown at The making.

Every five years of so, the vegetation needs to be cleared out. The hedge, one metre away to the south needs to be cut also every few years to give the plants some light.

Most of the species were planted, some individuals rescued from various parts of the croplands. A few, such as the marsh woundwort, found their way in; there are no other plants of this species in the surrounding farm.

Not much else is done to pond and ditch, except in very dry years, water from the tap has to be flooded in every few weeks.

Most farmland plants of wet habitat have been invaluable for thousands of years as food, garnish, dye or medicinal.

Water cress is a nutritious salad vegetable, once harvested from the wild and sold. Wild garlic is a natural garnish, not as strong as the cultivated but still used in some restaurants.

Meadowsweet, hemp agrimony, and yellow iris are all ancient medicinals. The woundworts do what they say, staunch and heal wounds.