This weekend coming,  3 to 5 June 2016, sees the Haal Festival of folk music at Portsoy, Banffshire, at which among many events the singer Jimmy McBeath will be remembered. He worked as a farm labourer at that time before WW1, when the country depended on local production and the conditions were bad for farming labourers. 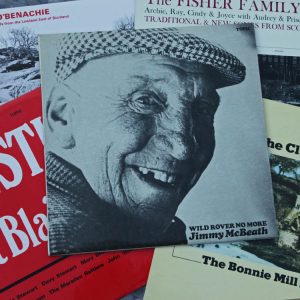 “But it was slavery days all the same. You workit the whole six months before you got money at all ” This quote is among the cover notes of a Topic Records LP of Jimmy McBeath’s songs. And it’s the songs rather than the privation that people today remember of Jimmy McBeath and other singers and musicians of his time.  Much of what we know of the traditional music of the place comes from a few people like him and a few recordings like this. You might think it would all have gone with the memories, but no, the songs are still sung today in pubs and clubs and festivals…  but mostly without the slavery.

Ps Thirty years later, at the closing stages of WW2, agriculture was still unable to feed people adequately, and still treated farm workers badly, but 20 years on from that, in the mid-1960s, food security was assured. Yet within a decade, the populace rejected local production in favour of cheaper or more exotic imports of bread, rice, pasta and maize.

…. it’s the songs that matter … there a few other links to the past.