Barley Hordeum vulgare has been grown here as a crop for many thousands of years. Some of the earliest charred remains of seed found in neolithic settlements were of barley.  It has not always been the most widely grown corn – oat had that status a century ago – but now barley covers more acres than wheat and much more than oat, its main products whisky and animal food.

Most modern varieties of barley are supplied by seed merchants. The seed for each variety is grown and bulked under controlled conditions that minimise impurity and keep the line genetically uniform, so each has a particular ‘look’ and growth characteristics and suitability for different uses. At one time however, all our crops were maintained as landraces, as seed from one harvest saved for the next. (See What are landraces?) Few landraces remain and one of those is bere barley.

Where did bere come from?

Like all our corn, or cereal, crops, barley started life in the eastern Mediterranean or west Asia when crops were domesticated from wild grasses around 10,000 years ago. From there it came west and north reaching the croplands around 5000 years ago, well after the ice retreated.  The earlier Living Field web site had the following paragraph –

“Imagine the small bags of seed, carried overland step by step, century upon century, from its site of domestication to the east of what is now Europe, and then by small boats to Iberia, then Brittany and north to the stone age settlements of the north-east Atlantic coasts, or else by other routes through central Europe and across the North Sea. How many times must those bags have perished and how many times must the boatman have reached dry land to see the seed rotted and the crops fail. And yet, 5000 years or more later, we still have a landrace of barley, known as bere (sounding in the north more like bear than beer) and still grown for special food and drink.”

When you see or experience the seas around Orkney (images above) and the other islands, you wonder how our early settlers managed to get here carrying bags of grain in their small boats.

Does any of that ancient barley remain?

Is there a continuous ‘bere line’ from the stone age? There can be no certainty. Landraces can be erased by natural calamities, or by peoples moving or changing their way of life. When a seed stock was lost, it might have taken centuries for new seed to be brought in. Later, waves of migrants from south and east would have brought their own seed with them.  Where the new seed came from  is not clear.  What we can say is that the bere still grown today is very different from modern varieties.

In Lawson & Son’s catalogue of 1852, bere or rough barley, was listed among the four-row barleys. Most of the barleys at that time were two-row.  The number of rows refers to the alignment of grain on the ear, obvious when you see it in two- and six-row types.

The four-row types, as Lawson and Son suggest, are probably better classified as structural variants of the six-row types. But the four-rows look different from the six-rows, so on the Living Field site, we will continue to call bere four-row. In the rough and tumble of subsistence agriculture over the millennia, the bere landrace, maintained as harvested seed saved from year to year, must have contained at various times, as well as the four-row, two- and six-row types within it.  Purity is not a feature of landraces.

Bere has now almost disappeared except in some remote corners and most commercial fields you will see are two-row. Yet bere has great significance as a traditional crop, a true heritage and a possible source of genetic material for future crops. 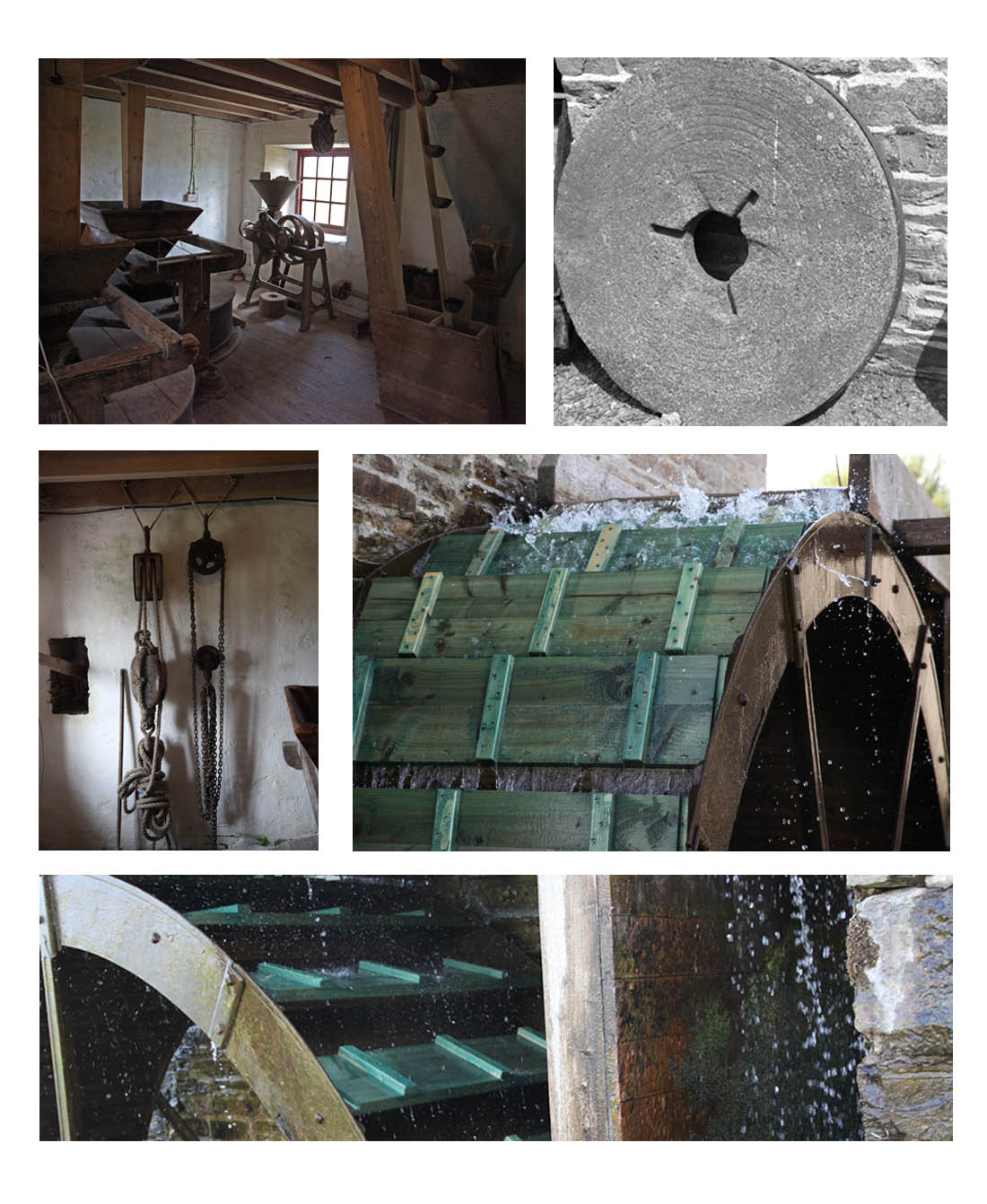 A landrace of barley is still grown and used in a few places, notably in Orkney, where fields are gown each year to supply grain to the Barony Mills, near Birsay (images above). When the grain starts to fill and ripen, it has strong, characteristic red bands on the outer husk of the grain (images below) and long, tough awns.

As in most barleys, the protective coating around the grain does not fall off after harvest (as it does in modern wheat, for example), so the husks and awns have to be removed to get the bere meal (flour).  Once, bere grain and other corn was ground between stones, then in stone saddle querns and later by hand-turned stone wheels, one on top of the other, and then by great mechanised grindstones powered by wind or water.

The Barony Mills in Orkney grind local bere grain into flour by great water-powered wheels. The Mills sell bere meal to the public (web link below). Bere grain is also sold to a few distilleries to add that something to the malt whiskey.

Barony Mills is an excellent place  – an essential visit for anyone interested in rare grain and flour and living industrial heritage; and if it’s spring or summer, ask for directions to the bere fields.

The garden has grown bere for several years. The crop is grown in the Garden as a landrace – seed is harvested, saved over the winter and sown the next spring.

The bere seed germinates quickly, after just a few days, and once outside is vigorous in its vegetative phase and then flowers and seeds profusely. As a seed stock it does not give any problems and requires no special treatment. As with all seed, it has to be kept dry between harvest and the next sowing.

The red striping on the outer husk, or covering of the grain, is visible upper right and lower left below. The seeding ‘ears’ tend to bend and together the awns form an asymmetrical fan, visible in the image at the top of the page and in the one upper left below.

Each year, a few two-row plants emerge in the bere. They could be impurities introduced from commercial varieties grown in the garden? We take them out to preserve the general bere character.

Growing bere and other landraces in the Garden has been  rewarding for the team and brought great interest among visitors. We start it off in April, it begins to flower in early June and is ready for harvest usually in August. It does not seem to have changed much in the last 180 years: Lawson and Son, in their experimental trials of 1835, record they sowed it on 7 April and it matured on 12 August after 127 days.

The Living Field’s original bere seed was given to us by the Agronomy Unit at Orkney College. For which, many thanks. Barony Mills, Birsay, Orkney, also gave us a couple of bags of grain. We have bought flour from them for demonstrations at various open days. Thanks to miller Rae Philips for advice.

Gladys Wright, Linda Ford and Jackie Thompson grow the bere crops and maintain the seed stocks for the Living Field garden. Text and images by Geoff Squire (unless stated).

Fenton A (ed). 2007. The food of the Scots. Volume 5 in A Compendium of Scottish Ethnology. Publisher: John Donald. (Describes the many uses of bere meal).

Fenton A (ed). 2011. Farming and the land. Volume 2 in A Compendium of Scottish Ethnology. Publisher: John Donald. (Many references to growing bere.)

Lawson P and Son. 1852. Synopsis of the Vegetable Products of Scotland. Edinburgh: Private Press of Peter Lawson and Son.

The bere line – rhymes with hairline – random notes on the origin and nature of bere, including Thorburn’s Diagrams – acreage and yield or bere and barley in the mid-1800s, and Bere, bear, bair, beir, bygg – names for bere in Old Scots, (also links to article with old names and for other cereals).

What are landraces? – introduction to crop landraces.

And see the page on miller Rae Phillips at Slow Food UK: http://www.slowfood.org.uk/ff-producers/producer-rae-phillips-barony-mills-beremeal/

The botanical or latin name Hordeum vulgare is used on this web site to cover all types of two-, four- and six-row cultivated barley. Some taxonomies separate the two- and six-row as different species, but where does that leave the four-row? Others suggest they are are better classed as sub-species of Hordeum vulgare.