Advancing up the single track road they are. Sheep keep them out of the pasture, but they find space between fence and tarmac. A purge in the last two years set them back, then this year one appeared, parachuted in – a flowering ragwort, alone among the grass.

Flowering and soon to spread its seeds it was. So the time came for it to go ….. but just before the pull ….. ‘what’s that?’ – it was crawling with bumble bees, about 30 of them, just before nightfall, two days before the equinox. Reprieve! 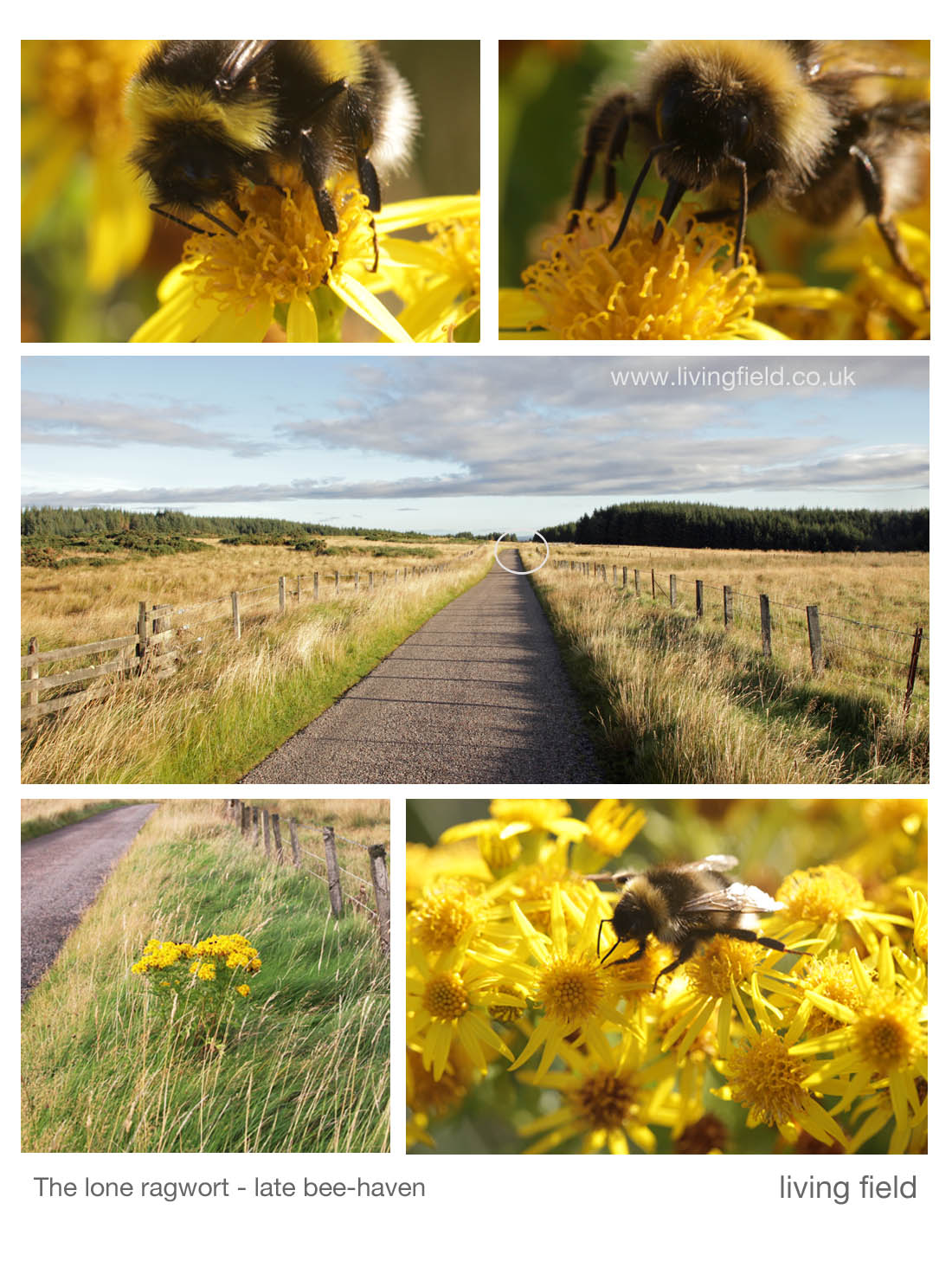 The bees were active, over the flower heads or working their way down to find a secure niche for the night. The next morning, about half were gone, but the rest were still busy, legs flailing when one encroached on another.

What else might the bees feed on? All three heathers were still flowering in patches – otherwise the only flowers were on late  sneezewort Achillea ptarmica and devel’s-bit scabious Succisa pratensis.

The ragwort Senecio jacobea is poisonous to some livestock and was  considered so troublesome that it was named in the Weeds Act of 1950 along with two thistles and two docks. Landowners could be fined for allowing them to thrive.

Attentive management reduced the ragwort in arable and good pasture, but just when it faced a bleak future (as it did most other poisonous weeds in the mid-1900s), along came big roadworks and big roads offering a  refuge and then channels for advancement across the country. Now it’s one of the most visible weeds of the late summer. Once outlawed, now thriving thanks to man.

The ragwort is not all bully and brash – it settles quietly and builds its seed base in derelict field corners, waste ground and old yards. Then sends its pappus-borne seeds wherever the wind takes them.  It even advances  into higher ground as in the images above (around 300 m).

The ‘lone ragwort’ well illustrates the balance that needs to be set between what people see as the the positive and negative roles of plants. Just one poisonous plant this year, but 100 next year, against a late haven for buff-tailed bumble bees that might just raise their chance of survival over the winter.

By 28 October, it was still flowering but also seeding (more than it was flowering) and not a bee in sight. So out it came to stop further seeding!

The article on weeds 5000 Plants Weeds is being revised and gives more on the five Weeds Act weeds.

Plant power day (also known as the fascination of plants day!) is an annual joint venture between the University of Dundee and the James Hutton Institute which aims to engage members of the public and encourage exploration into the fascinating world of plant biology!

Held at the University Botanic Gardens, 17 May 2016, on what turned out to be quite the sunny Saturday, the event had a range of activities centred on plant biology with activities ranging from: DNA extraction from raspberries, exploring the plant-soil biome, an adventure trail which took the public on an educational journey through the wide diversity of plants housed at the Gardens and, our personal favourite, an exhibition of plant insect pests.

Our stall, as you can probably guess, was based on the insect pests of a range of economically and agriculturally important plants and the natural predators of these insects which form a diverse biological system. Primarily consisting of many wonderfully coloured – pink, green, purple, black and brown – aphids (all confusingly referred to collectively by visitors as ‘greenfly’) and the vine weevil, alongside the natural predators of aphids, including the ladybird (the overall star of the show) and parasitoid wasps (a hit with children who were fascinated by their lifecycle, the oviposition of an egg inside an aphid with the subsequent larvae eating the aphid from the inside out – imagine Alien 1979).

We used ‘hands on’ digital microscopes, Dinocapture devices, to allow the visitors, mainly the kids, but a few adults gave it a go as well, to explore the insects we had brought along and see what cannot be seen with the naked eye (there are a few pictures below to whet your appetite). We also supplied interesting plant and insect activity and fact sheets for the visitors to take away, the insect mini-factsheet and the factsheet on plant defence were winners with kids eager to take these to show and tell on Monday.

Overall there was a good attitude towards the event and some engaging questions about the work that goes on at the University and the JHI, we even provided impromptu pest-control advice to gardeners struggling with ‘greenfly’ infestation (diluted washing up liquid rubbed onto infested leaves/stems works well). To conclude – A good day was had by all! 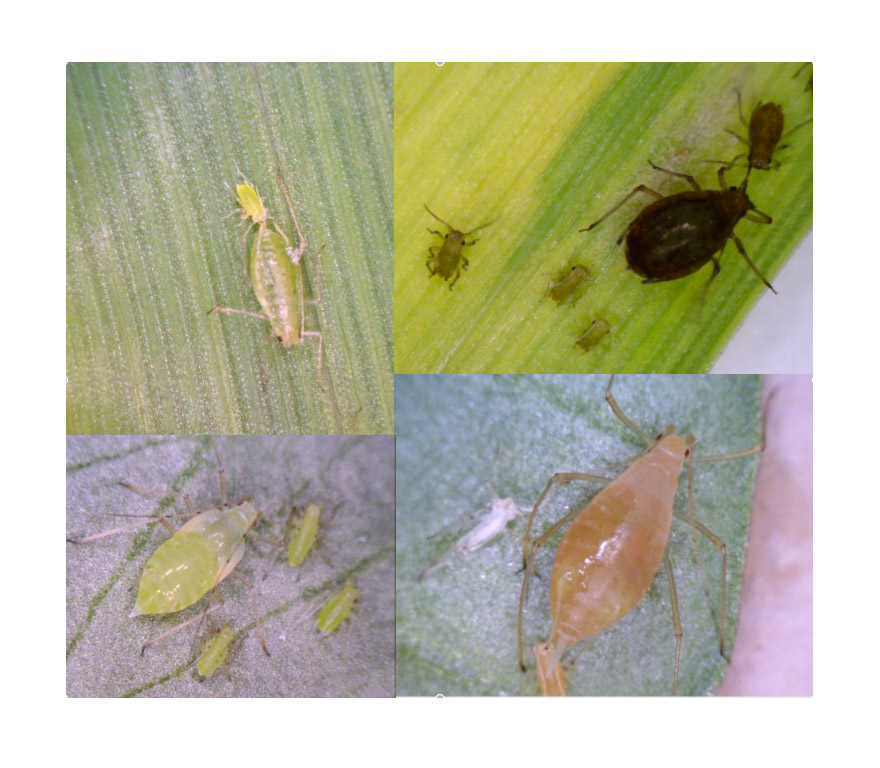 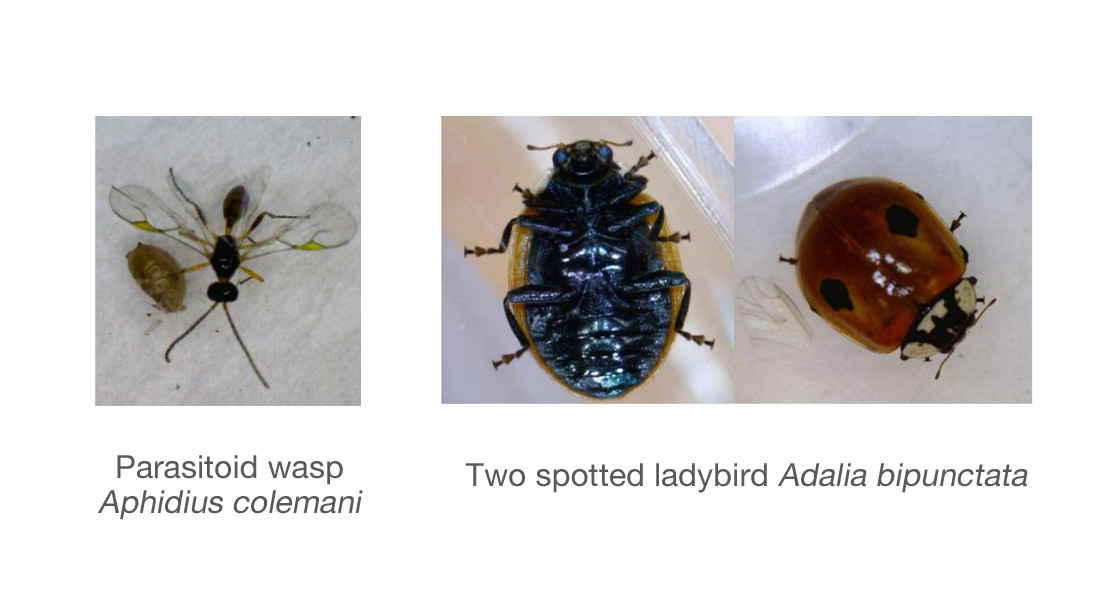 In 2013, we looked for the plants in the Living Field garden that were most attractive to bumble bees and hive bees, from the first flowers in late March, to the time of the first heavy frost in October.  Most visitors were bumble bees of the commoner species, but occasionally hive bees foraged around.

We did not grow plants for the particular purpose of feeding bees, yet three areas were particularly active. One was the 10 year old meadow, where field scabious was the favourite; another was the legume collection set up in the west garden; and the third was a piece of rough ground in transition from a sown, annual cornfield to a more perennial community and containing tufted vetch and viper’s bugloss.

By mid summer, many of the bumble bees looked battered and ragged, hardly enough wing left to fly, the result of repeatedly navigating the tangle of vegetation. It’s in a bee’s nature to work itself to death for the hive, eventually falling to the ground or hanging under a flower head. We did not look for nests of the bumble bees to see how many were inside the garden; not did we observe the directions from which the bees entered and left, but that could be something to do in 2014.

Photographs and notes on these and other plants and bees can be viewed at The Garden / Bee plants. All species, including first-year plants of the two melilots, should be around in 2014.  (The melilots died after flowering in 2013.) Several plants in the medicinals bed should flower well this year, labiates such as betony, and borages and foxgloves.