Since its publication on these pages in 2017 the Vegetable Map of Scotland [1] has attracted much interest. There is a growing awareness of the benefits of local, nutritious food – especially if bought from short supply chains that use the least possible carbon.

People want to know where their food comes from, how much is imported and how much grown locally and whether the country can grow more of its food within or near its borders.

These questions are asked especially of vegetables, including pulses and potato, because they are (or should be) mostly eaten very fresh, such as leaf, or else, like carrot and swede, kept not too long on the shelf before being cooked.

With this background of interest, the Vegetable Map was constructed by researchers at the Institute as part of joint interests with Nourish Scotland [2]. The group interrogated EU databases provided by the Scottish Government [3] to locate the fields in which the various vegetables and soft fruits were grown.

An example of part of the region is shown above. The Map remained available through this web site, then in late 2018, ideas began to form about making the map real – complete with vegetables – and it would be constructed in the Living Field garden [4].

Time went by. Ground was weeded, cleared and cultivated – a rare barrenness in the otherwise plant-rich garden. Then gradually, over the winter, tectonic plates shifted.

People began to wonder about the strange earthworks dotted with rocks that appeared in the plot. Was the garden being visited at night by strange forces or was the Living Field community finally just losing it? Rumours were rife.

More time went by. Turf was laid in a great rectangle over the whole patch, but people were still unclear of what it was all for …. and what lay underneath.

The turf rooted and formed a fine carpet. But what were the rocks? A ritual landscape? Tayside’s answer to the Ring of Brodgar?

Then one day in late spring 2019 an outline was traced and the turf was cut to reveal the unmistakable shape of ….. Scotland ….. its indented coast now clear and the land inside complete with hills and mountains.

All well so far ……. a map of the country covered in grass and rocks …… nothing new there. But then in May, holes were cut in the turf and plants put in the holes: and you’ll guess what plants – Yes, vegetables.

And that is where we are at the beginning of June 2019. The Farm’s drone was flown to photograph the Living Field garden from the air on 5 June. The image of the map appears below.

Different types of vegetable are being planted in the parts of the country where they are typically grown. It is possible to see the early plantings to the right of the image. The brown holes in the turf are where circles have been cut in readiness for later plantings. (The ‘corners’ and lower border are spare turf in case of need.)

Planting will continue well into the summer. There will be some surprises which we shall show later.

For now, you can read more about the history of vegetable growing at the original page [1]. photographs of the construction will follow – link to be provided. And there will be more articles on what can and can’t be grown in the soils and climates of our northern latitudes.

Living Field people will be on hand at Open Farm Sunday 9 June 2019 to explain more about the Vegetable Map of Scotland. See you there!

With apologies to the Outer Hebrides, Orkney and Shetland, presently missing from the map but to be included.

[1] The Vegetable Map of Scotland at Can we grow more vegetables? was constructed by Nora Quesada with Graham Begg and Geoff Squire.

[3] The original digital map was produced during work on the distribution of crops as part of the Scottish Government’s Strategic Research Programme.

[4] Gladys Wright had the idea of constructing the Vegetable Map in the Living Field garden and was soon offered enthusiastic help by The Farm. Together, and with other coopted helpers they measured out the grid, made the mountains (like Titans), laid and cut the turf and raised and planted the plants. A great effort by the Living Field community!

[5] Further links to the map on this site: Living Field garden from the air and Veg posters from Open Farm Sunday.

The Living Field Garden was looking good at Open Farm Sunday on 11 June this year.  Despite wet weather, we had over 1000 visitors.

More on the Open Farm exhibits appears at the Hutton Institute’s LEAF web pages. Here we look at some of this year’s plants.

The hedges are thick with leaf, the hawthorn now filling its haws, the elder and the wild rose still in full flower. Water forget-me-not and wild iris are flowering in the wet ditch, while field scabious, comfrey  and viper’s bugloss are offering plenty for the several species of bumble bees that live in and around the garden.

The three local species in the images above all reside in their own habitats, but are within a few seconds of hoverfly flight to the exotic maize in the arable plot. Maize originated as a crop in the Americas and was unknown in the country before the last few hundred years.

This proximity of the wild and the cultivated is one of the recurring features of the garden. The images above contrast the cropped area of the east garden with the perennial meadow and hedge plants. The  field scabious in the meadow will keep the bees well supplied until late September at least.

Raised beds of the west garden

Through the gate, the west garden’s raised beds are filled this year with vegetables and herbs. There are various cabbages and spinaches, parsley, thyme and dill, companion plantings and intercrops, to name a few, and all are intended to show the very different concentrations of minerals that these plants take from the soil and accumulate in their tops.

The background and results of this study, which is based on research at the Institute, will be covered in a future Living Field post.

We’ve been constructing various small places for insects and spiders since the garden began, but this year, the idea of a more permanent residents block was made real just before Open Farm Sunday. First stack your pallets, add a roof of turf and fill the spaces with small bespoke homes for our creepy friends. 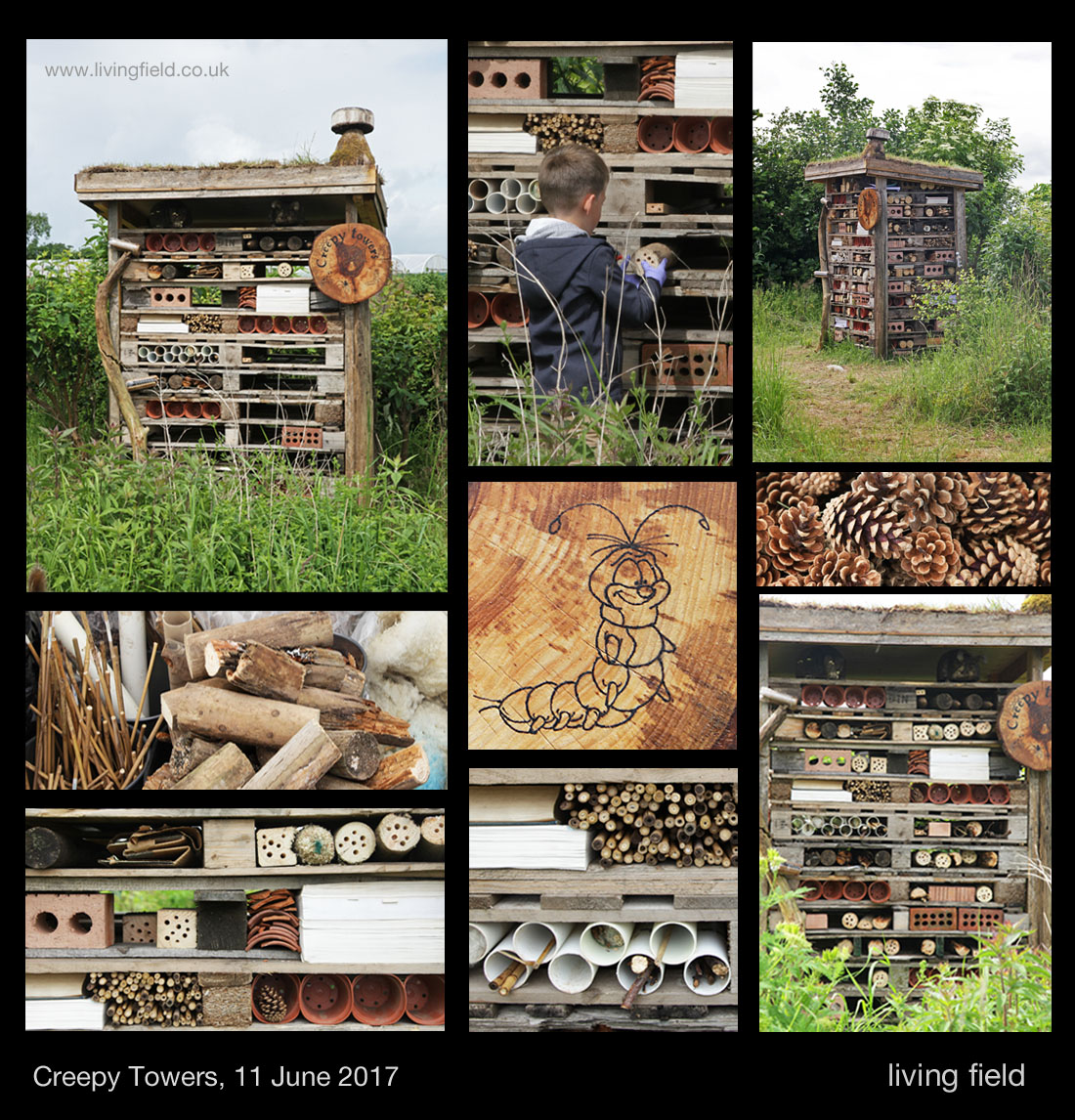 The garden made a return this year as the base for many activities at Open Farm. The cabins hosted exhibits on greenhouse gas emissions and nitrogen fixing legumes. The east garden, as you go in through the gate by the cabins, had a soil pit, cereal-legume intercropping, pest traps and the urban bug house shown above, while the west section displayed heathy vegetables, soil bacteria, our friends from Dundee Astronomical Society and Tina Scopa running a workshop on wild plant ‘pressing’.

The garden was maintained by the usual crew: Gladys Wright and Jackie Thompson on the arable plots and raised beds; Paul Heffel from the farm kept the hedges in trim and cultivated the soil where required; Geoff Squire arranged the medicinals and dyes and kept an eye on various rarities and curiosities.

Gill and Lauren Banks, with help from the farm, constructed Creepy Towers, for which the ‘chimney’ was crafted by Dave Roberts and the plaque by visiting student Camille Rousset.

There is no formal funding for maintaining the garden – it happens through commitment and hard work, often out of hours.