Three flours that sustained life on the Atlantic seaboard for centuries. Commonly grown as a crop mixture in the field.  Mixed and cooked into tasty bannocks in the kitchen. Decline to near extinction in the 20th century. Now with a great future as sustainable low-input crops, bringing diversity to the farmed landscape and healthy, nutritious food.

Peas, bere (barley) and oats have been a staple plant mixture giving protein and carbohydrate through the centuries of farming on the Atlantic seaboard. Yet in Scotland, as in much of Atlantic Europe, their role diminished within living memory.

Peas  declined in area from the mid 1800s to to almost nothing in the 1930s. Bere dropped out of census records in the 1880s but was then nearly lost except in a few northern fields. Oat fell from being the dominant grain crop over the last few hundred years to covering less area than barley and wheat by 1950 [1]. Their decline is now being reversed.

Peas as crops and food

Traditionally peas along with bere and oats, and sometimes beans, was the staple protein food of the rural working population in Scotland. They were the local pulse and grain – the sustaining combination of plants that once fed the world and still feeds large parts of it.

Fenton’s Food of the Scots [2] cites many records from the 1400s to the late 1800s of peas, beans and cereal grains grown alone or in mixtures. Similarly, the flours of peas, oats and bere were eaten as bread and bannocks, either as sole constituents or baked in combination.

The pulse crops were certainly recognised and widely appreciated here for hundreds of years. A 1426 Act of Parliament in Scotland stipulated that a farmer should sow 1/12 of his labour in peas [2],  not just for protein food but to fertilise the soil with nitrogen (though the process of biological nitrogen fixation by legumes was not understood until many centuries later).

The products of peas and beans were grown locally, traded across the country or imported by sea, often from nearby Atlantic and Baltic ports. Though peasemeal was demeaned as a food of the labouring classes in some regions, the inclusion of peas in the subsistence diet was recommended by Hutchison in 1869 [2] as contributing to a healthier and longer life for the rural worker and their family. 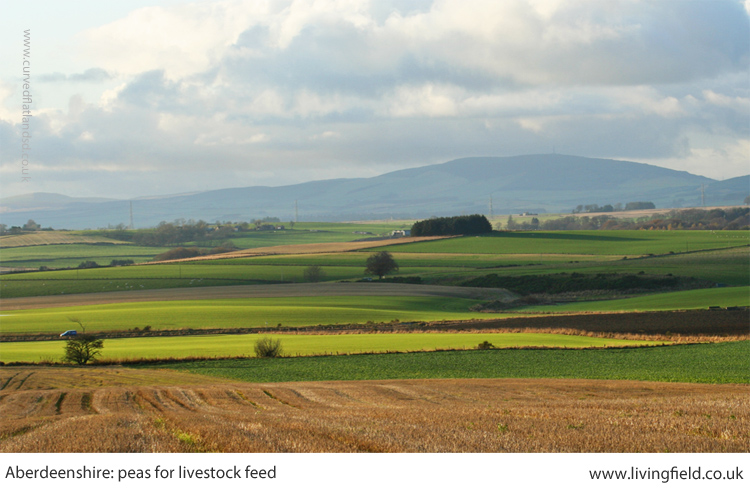 The records cited by Fenton indicate peas as a crop and food were more important here than beans Vicia faba. Yet by the mid-1800s, that order was reversed. At the first crop census in 1854, beans occupied 6 times more area than peas [1]. The cause of the decline of peas as a crop is suggested by MacDonald (1908) as due to ‘the extended use of potato’ in the subsistence economy [2] and by Porter  (1925) to the replacement of pulses by clover and grass mixtures [3] that are better at maintaining soil fertility.

Well into the period up to the 1950s, both pulses were named individually in the census and classed as grain crops to be harvested like cereals, yet unlike the cereal grains, they continued to decline in area despite a short-lived revival in the late 1940s (when food imports and nitrogen fertiliser were  restricted).

Peas became a minor crop by the 1930s and disappeared from the annual census in the 1950s. Beans went a decade or so later. They covered too small an area to be recorded in the annual summary. They reappeared gradually from the 1960s in different forms, such as ‘vining peas’ for human consumption, but that’s another story, and despite a rise in sown area similar to that of the 1880s, peas and beans together now cover 1-2% of the cropped surface, a very low percentage.

The benefits of all three products – peasemeal, beremeal and oatmeal – to health and environment are increasingly recognised today. Here, we wonder what peasemeal-beremeal-oatmeal bannocks tasted like and decided to find out.

For much of recorded history in these islands, wheat was not as widely grown as oats and barley, and when it was grown or imported, it was more to feed the wealthy. Beremeal and oatmeal do not ‘rise’ much by themselves, so were most commonly eaten as bannocks, a form of flatbread [2]. The flours were mixed with water, patted into a round, typically 1 to 2 cm thick, and baked on a hot surface on or by a fire.

To try out the method, flours were sourced from water-powered mills at Golspie in Sutherland and Birsay on Orkney [4]. Then trial and error – peasemeal and oatmeal, peasemeal and beremeal and all three together, the latter preferred for the blend of tastes.

The oatmeal was medium-ground and gave some granularity to the mix. The peasemeal had a yellowish colour, while the beremeal was more of a light brown than a standard refined wheat flour.  On the packets, peasemeal had a protein content of 20.4% and oatmeal (as most unrefined cereals) around 13%.

The three were placed in a bowl at about 1:1:1,  or slightly more oatmeal than each of the other two, mixed into a thick paste or dough with water, turned out onto the board with a little beremeal on it to stop it sticking and then pressed into a bannock (about 10 -15 cm wide and 1 cm thick). 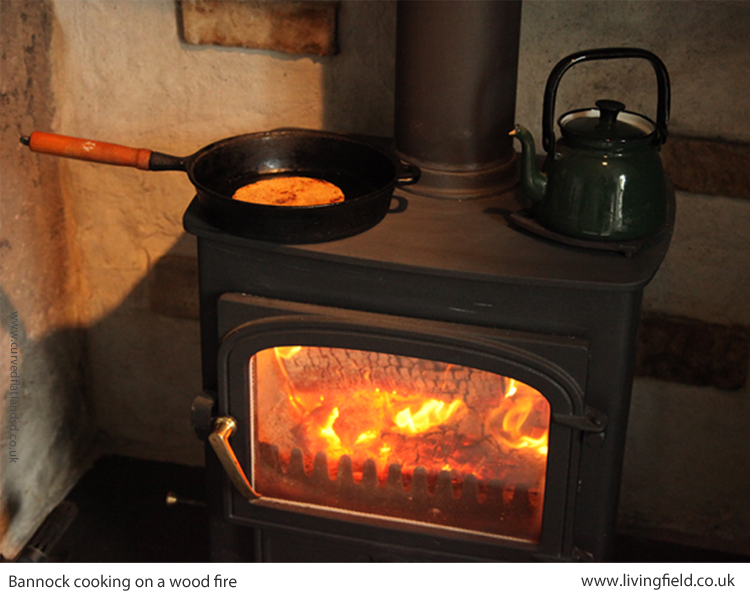 It took 10 to 15 minutes to cook the bannock slowly in a cast iron pan, very lightly oiled with cold-pressed rapeseed, though oiling is not essential. Heat sources tried were a modern gas stove, an indoor wood stove and an outdoor fire.

The three-meal bannock was tasty and filling, eaten with butter or marge (could try a drizzle of oil), marmite, various cheeses and dipped in soup. A satisfying experience.

Pea Pisum sativum is now grown in various forms, for animal feed, for canning and freezing to feed people and as a fresh vegetable. The peas traditionally used for peasemeal or flour tended to be marrowfat or similar types, harvested when mature [but see note 4]. Peas need no nitrogen fertiliser and less pesticide than most non-legume crops.

Bere, the traditional landrace of barley Hordeum vulgare, is now grown only in a few localities, but appears to need less fertiliser and pesticide than modern two row barleys.  Oats Avena sativa were overtaken by barley in the middle to the 1900s as the Scottish cereal crop of choice, but they too need less pesticide and fertiliser than barley and recently oat yields have increased to rival those of spring barley. Oat is also nutritionally superior to barleys and wheats. 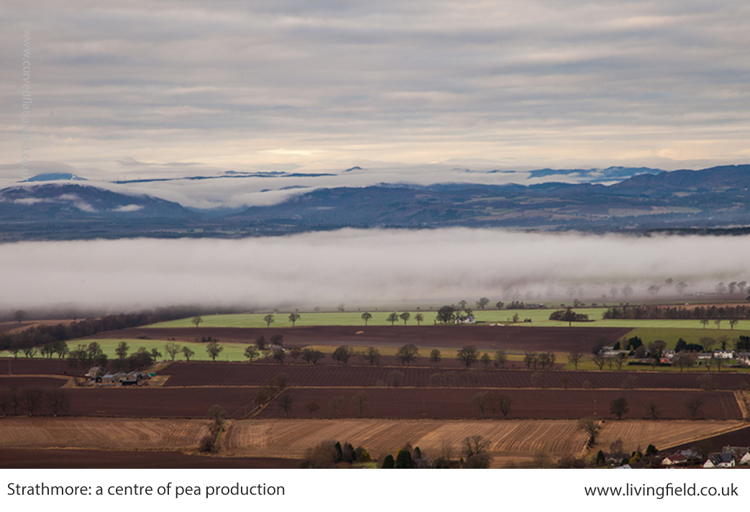 Many records over recent centuries describe the growing of two or three crops mixed together in one field. ‘Mixed grains’ was recorded in the crop census for most of the 1900s, while mashlum  – a mix of peas or beans with oat or barley – was common enough to be cited as a distinct crop category from 1944 to 1978 [5]. As related elsewhere on the Living Field web site (see Mashlum – a traditional mix of oats and beans) these crop mixtures disappeared from the census records but are still grown by a few farmers who value their contribution to fertility and nutrition.

The yields, nutritional content and environmental benefit of traditional landraces and mixed grains are being researched and quantified at the James Hutton Institute, Dundee [6, 7}.

Teaching about grains, milling, flour and food at Open Days

The Living Field bought its own hand-powered corn mill a few years ago. It consist of a stone base and two grinding stones. The latter were honed by Mr Roberts from the Hutton’s workshop and the whole was supported by old tyres. Grain (in this case oats, centre top) is fed into a vertical channel in the upper stone and falls  down through to the gap between the stones.

The stones are turned by the wooden rod, as shown by Mr Young and two visitors at an Open Day (this one in 2012). The grain is ground between the stones to a mix of meal and bran (the husks of the grain) which gets pushed out and collects in the stone base from where it is brushed off into a container (lower right). The meal and bran are separated by hand using a sieve (lower left). 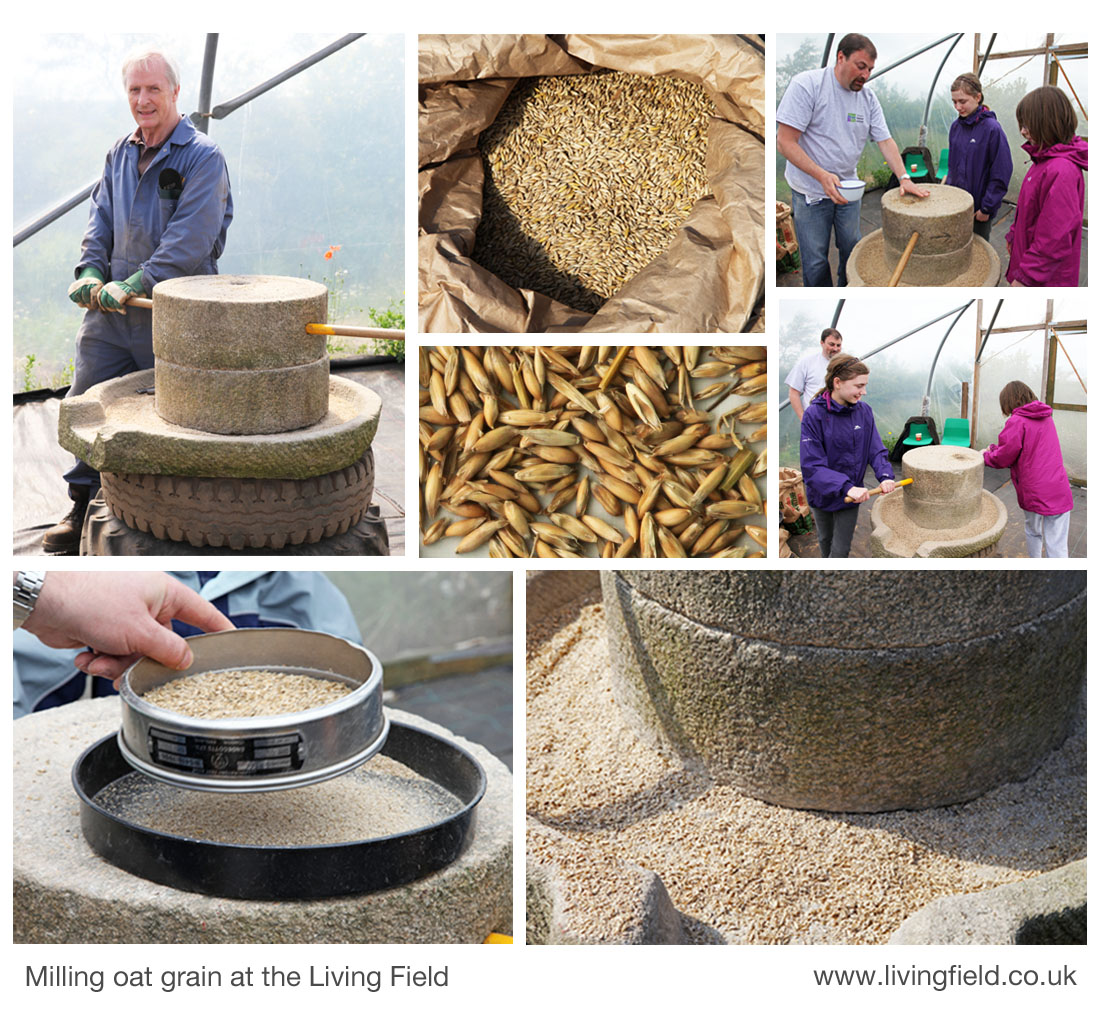 At Living Field open days – at Open Farm Sunday for instance – visitors can see the whole process from growing the plants from seed, harvesting grain, grinding the grain and separating the meal from the chaff. Gill Banks shows how to make bread from the flour made from these ancient varieties.

[1] Census records for the main crops began in 1854, then continued from the early 1880s through to 1978 as Agricultural Statistics Scotland, a fine source of information. Yearbooks are available online from the Scottish Government web site at Historical Agricultural Statistics. More on the 1854 census on the LF site at Thorburn’s diagrams and Bere country.

[2] Fenton A. 2007. The Food of the Scots. Volume 5 in A Compendium of Scottish Ethnology. Edinburgh: John Donald. Peas, peasemeal and bannocks appear in Ch 17 Bread and Ch 14 Field crops. Fenton cites: MacDonald J (1908) Editor of Stephens’ Book of the Farm for the loss of peas in preference to potato; and Hutchison R (1869) Report on the dietaries of Scotch agricultural labourers, (Transactions of the Highland and Agricultural Society, 4th, 2, 1-29).

[4] Sources of the meal. Golspie Mill in Sutherland makes a range of flours and meals including the peasemeal ‘made from roasted yellow field peas’ and the oatmeal used here. Barony Mills at Birsay, Orkney  makes the beremeal. Barony have appeared many times on this web site e.g. at Landrace 1 – bere. Suppliers who stock these products include Highland Wholefoods in Inverness.

[5] The Living Field is publishing, in 2018, articles, notes and photographs on crop mixtures as part of its Crop diversification series. The first post is Mashlum -a traditional mix of beans and oats (though mashlum can be any combination of pulses and grains).

[6] The James Hutton Institute carries out a wide range of studies on pulses and grains. The nutritional and environmental properties of pulses and pulse-grain mixed crops are examined in the EU H2020 TRUE project, coordinated from the Hutton Institute and with many partners across Europe. For further info, see TRUE Project EU and articles on the curvedflatlands web site at Transitions to a legume-based food and agriculture. Contact at the Institute: pete.iannetta@hutton.ac.uk.

[7] In collaboration with the University of the Highlands and Islands Orkney College and University of Copenhagen, Denmark, The James Hutton Institute does research on promoting the use and value of bere barley http://www.hutton.ac.uk/news/understanding-living-heritage-bere-barley-more-sustainable-future. The agronomy, genetics and unique physiology of bere barley are studied with specific reference to micronutrient efficiency and potential environmental benefits. Contact tim.george@hutton.ac.uk or joanne.russell@hutton.ac.uk.

Links to related articles on the Living Field web site

The page on the Bere line (rhymes with hairline) gives links to comments, images and articles on  bere barley, including our correspondent Grannie Kate‘s recipes and experiences using bere meal and our Gill and Co’s breadmaking with various ingredients at Bere and cricket.

Can we grow more vegetables? looks at the current geographical distribution and status of vegetable growing in Scotland, including areas with peas and beans.  Other links to pulses include: Scofu – the quest for an indigenous Scottish tofu and Feel the pulse – our travelling exhibit on peas, beans and their products,

Author and images: geoff.squire@hutton.ac.uk; information on sourcing the grinding stones and growing bere, peas and oats in the Living Field garden, gladys.wright@hutton.ac.uk.

The Living Field web site Editor, normally averse to the alchemy and incantations of cooking (best left alone!) managed to make (and eat) bannocks from the constituents bought from the sources indicated at [4]. Peasemeal brose is even easier – just add hot water to a couple of teaspoonfuls of peasemeal, stir and eat with toast or dips. Caution – beware the three-meal bannocks are addictive. Reconnecting with primordial tastes?