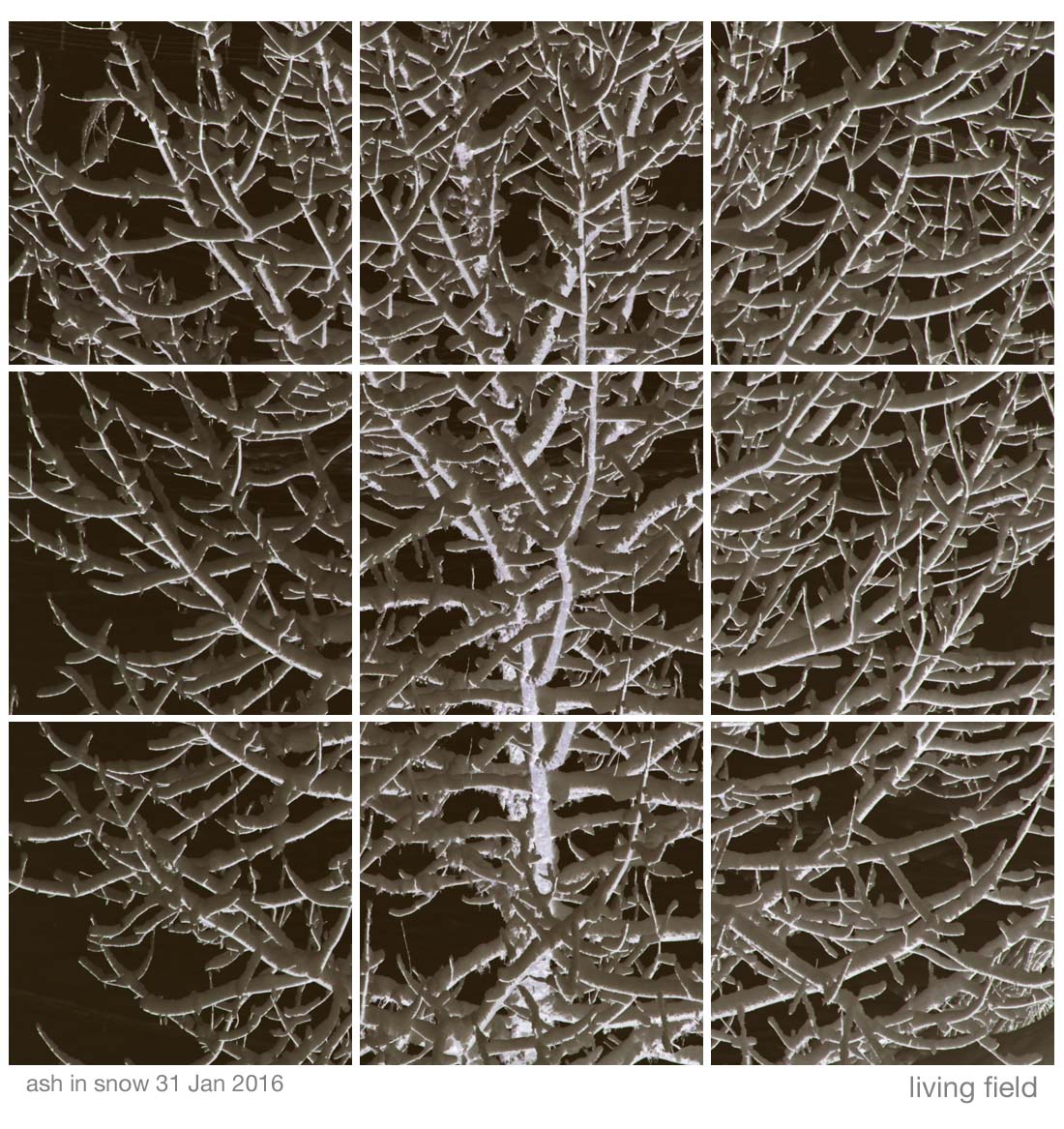 Nine apples from a tree. Not that old, planted around 1995 as a 4-foot whip – a seedling ‘crab’ but not one of the wild ones, more an improved form, not grafted, but now 20 years old next year and a tree …

… and for the last 10 years, yielding at the equinox a mass of fruit, no two apples the same, some fairly symmetrical,  most a bit skewed, some easily bruised on the fall, yet none wasted, all eatable raw but better stewed for 10 minutes and then eaten straight or with grated nutmeg or immersed in custard – an earthy, apply delight, what apples should be.

Ps. The Cairn o’ Mhor winery and cider makers, based on the Carse of Gowrie, are looking for apples  this autumn. If you have any spare contact them, details at http://www.cairnomohr.com

The hawthorn Crataegus monogyna is the fourth of the common small trees of the Rose family to flower white in spring and early summer. It follows blackthorn, wild cherry (gean) and bird cherry, reaching its peak flowering in May, and unlike the blackthorn puts out its leaves before it flowers.  While marsh marigold flowers before May Day and before the second cross quarter day of the year, hawthorn here reaches its peak flowering in the middle of the  month. This year, 2014, all four of the thorns and cherries were covered in turn in masses of white – a spectacular sight.

Hawthorn is the last in the year of the small trees with a clear white blossom and the last with a fragrance. Next comes rowan with a mousy tinge to its flowers, and the much rarer wild service tree, even more mousy in look, and in smell too – that first-whiff-of-dead-mouse  unmistakably filtering down from the tree’s branches as it filters down from the deceased rodent in your roof space.

Hawthorn, if left in a clearing and unchopped, forms a fine small tree, as in the upper image above, just coming into leaf at Balnaguard Glen, and immediately above, in flower behind a stone wall at the southern base of the Sidlaw Hills.  It is more common in a hedge, sometimes planted, sometimes self-sown. Where hedges are cut close each year, it hardly flowers, except in gaps or at the ‘ends’, for example next to a gate.

Hawthorn joins meadowsweet, agrimony, lady’s mantle, wood avens, raspberry, strawberry, cherries, apples and pears as useful members of the Rose family. It makes a good thorny hedge (to keep stock in and – historically ? – people out), a hard wood for tool handles, and a source material for dyes, teas and various concoctions. Its many mythical and supernatural associations are related in Grigson and Mabey’s Flora Britannica.

The flowers of the Rose family are simple, most parts distinct and visible. The sepals and petals are usually in fives, as in the image above, and the central female, tubular stigma is surrounded by many male stamens whose pollen-bearing anthers change from a first, fleshy, deep pink to brown and then shrivelled black, all in a few days. In the compound image above, of the same branch, but focussed on two different planes, the pink anthers are of a flower just opened while the rest are past their prime.

The fruits, known as haws, ripen to crimson in autumn and define the croplands’ hedges and copses as much as the hips of the wild roses and the sloes of blackthorn. Few people now collect and know what to do with these natural products.

The wild cherry, also known as gean, Prunus avium is the second of the croplands’ wild cherries to flower. Like many wild trees, grown from seed, individuals differ in their tendency to be vegetative or reproductive.  Some trees hardly flower while others cover themselves in a spectacular mass of white in late April and early May.

The gean can be cut into a hedge but more often appears as a small to medium tree, a strong trunk  supporting a few main branches, off which emerge secondary branches almost at 90-degrees in some specimens. The best wild cherries are in tree lines or copses in unmanicured farmland. The one shown above, straggling a stony mound, was on the margin between arable and upland grazing. It looks as if the present tree might be supported by several ‘stems’ that grew around an old dead or cut trunk.

The cherries themselves are small and sour, a flavouring for alcoholic drinks, while the timber is strong, the gum is said to be ‘an old medicine … recommended for coughs’ (Grigson) and ‘the roots dye purple-red’ (Darwin T).

Unlike the blackthorn, the first to bloom, whose flowers are spattered all over the tangle of branches, the gean holds its flowers in clusters on straight branches, usually just trunk-wards of an expanding cluster of leaves. The sepals, that split and bend back to allow the white petals to unfurl, are reddish (see image above) whereas they are green in the blackthorn.

The wild cherry is increasingly common now as a result of plantings after road construction. Some of these trees look a bit too lush for a wild cherry.

The blackthorn Prunus spinosa is the first of the wild members of the genus Prunus, the cherries, to flower in the year. Its fruit – the black sloe – is not what we might expect of a cherry, being sour and unfit to eat, yet is used as a flavouring.

Generally the bush reaches full flower in mid-April while the leaves are still in bud, or just expanding, and where the plants are let to form thickets, they appear from a distance as if a heavy frost had covered the tangle of black branches.

The spectacle of a blackthorn thicket in flower has become uncommon in the croplands – relegated to higher ground on the fringes of rough grazed pasture or in lowland hedges that have been serially uncut. Massed thorn is sometimes seen as plantings around roundabouts and slip roads but seldom impresses.

It is a fine plant of the hedgerow but rarely flowers on branches that are trimmed short.

The flowers are simple and primitive, typical of the Rose family – five green sepals, which previously encased the flower bud, but now showing through the base of the five white petals, and many pollen-bearing (male) anthers ringing a central (female) style and stigma.

The flowers are held close to the woody stems, on stalks about 1 cm long, unlike the gean Prunus avium where the flowers hang in clumps  on longer stalks and the bird cherry Prunus padus where they are held away from the stems on short floral branches.

The blue-black fruit, like a small dark plum, is used in drinks, gin and sloe wine, and has a long history as a medicinal and dye.  It turns dark blue from green in autumn, and if not removed, remains black and slowly withering throughout the winter when the leaves are gone.

Occasionally the blackthorn grows into a small tree, as the one by a lane in the images below.