Transition Turriefield was set up in 2011 as a community run growing project, to provide locally produced fruit and vegetables in Shetland. It was established to demonstrate a reduced fossil fuel approach to food production within the isles, to reduce Shetland’s food related carbon footprint, increase Shetland’s food security and ultimately to change the way Shetland thinks about importing food.

Before the era of cheap oil and global food transportation, all Shetland crofts had a yard to grow crops. It was the only way to have fresh vegetables. The most common produce grown, along with the cereals bere and oats, was Shetland kale, neeps and potatoes [see note below]. Produce was used as winter livestock feed, as well as supplementing the crofter’s diet of lamb and fish. These crops were hardy and coped well with the Shetland conditions.

Nowadays yards can be seen all over Shetland, lying empty and unused. Tastes have changed and, along with the rest of the western world, Shetland residents expect more variety and an ‘out of season availability’ of produce that their grandparents could never have imagined. Regular ferry sailings and flights have made food available from all over the world, twelve months of the year, weather permitting. 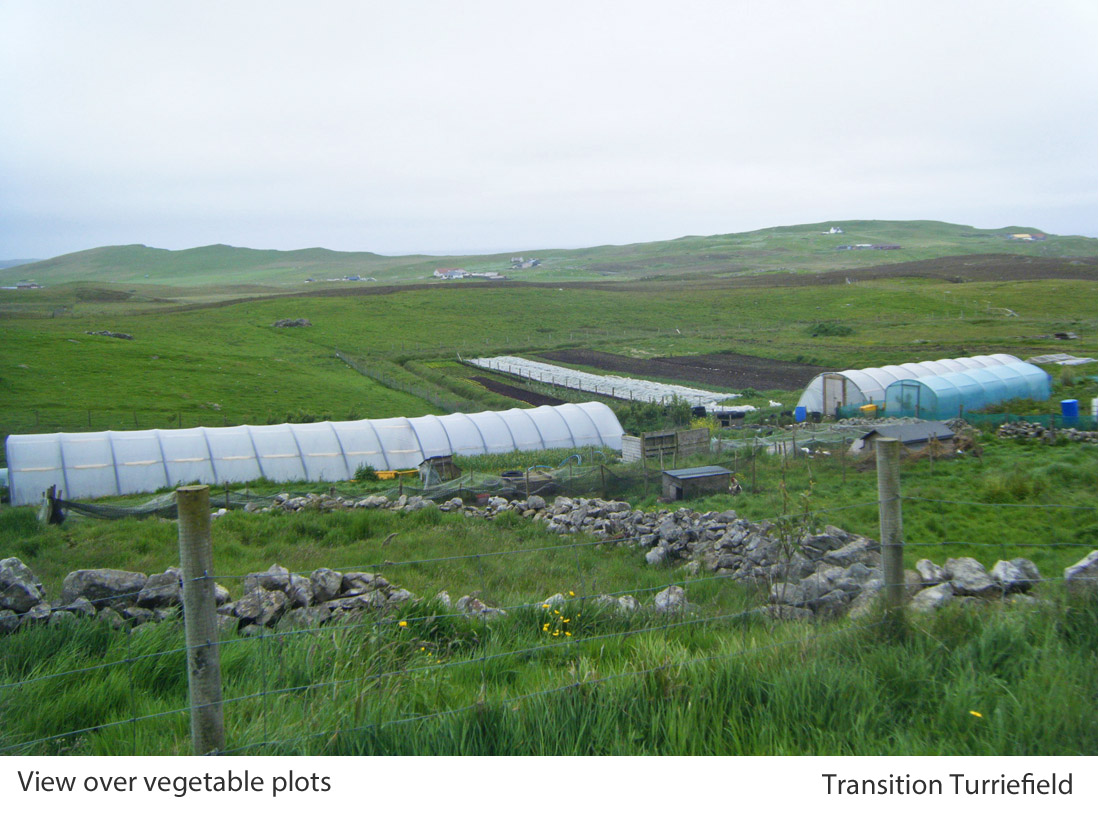 Encouraging island residents to consider reducing CO2 emissions, personal carbon footprints and make positive food buying choices is an uphill struggle. It is hampered by a belief by many that the alternative means a return to the kale and neep eating of the pre-1960s.

Transition Turriefield has been determined to show local food production can provide better choice, fresher produce, reduce carbon footprints and be available even when bad weather prevents supplies arriving. From the beginning the project has focused on demonstrating that a wide range of produce can be grown in Shetland at market garden scale.

Based on a small croft on the far west mainland, the challenges for economically sustainable food production are huge. The land is designated by the EU as a ‘severely disadvantaged Less Favoured Area’, of poor land quality and suitable only for rough grazing. The season is short, weather unpredictable and the climate extreme. None of which encourages bountiful crops.

There is no doubt that kale and neeps are the easiest and most productive crops to grow. However, using innovation, along with experimentation to create micro-climates, and combining old fashioned farming methods with modern technology, more exotic produce has been made available to the community instead. 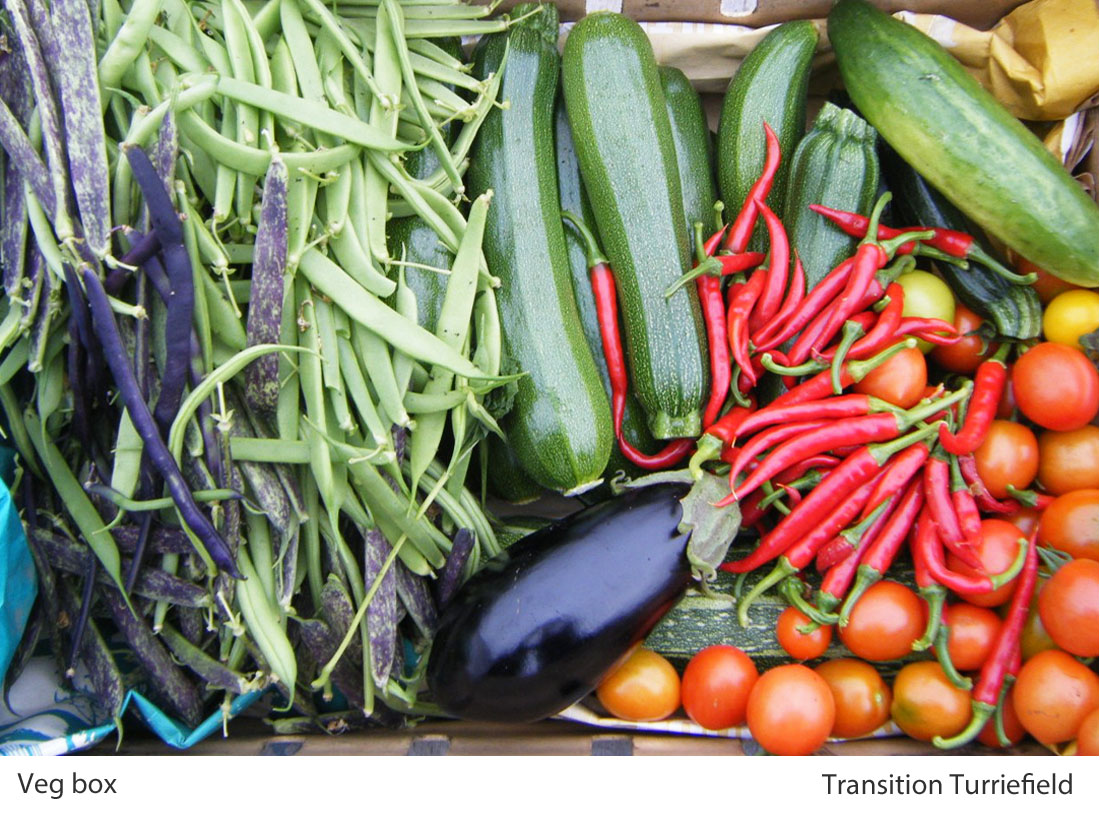 Of the 21 hectares of land belonging to the croft, approximately 1.3 hectares are suitable for vegetable production. Just under 1 hectare is currently in production and includes 500 square metres of  polytunnel space and 110 of raised beds as well as outside field space. The main growing area is at the lowest point of the croft. Soil here is either deep and peaty (drained bog) with clay patches, or shallow and stoney, with clay and low in organic matter.

Soil nutrient analysis shows a pH of 6.3 with low phosphorus. Structurally the soil is compacted below the surface and low in oxygen due to the water content. Field drains and ditches have been put in and this has made a difference to the moisture content of the soil during the drier part of the season. As the land is worked season by season, effort is made to build soil and raise the growing area, improve structure, texture and nutrient content.

Beds have been cleared using pigs and hand tools rather than machinery. Muck, seaweed, ash from peat and wood, compost, and loam from composted turf, are added each season in various combinations and quantities depending on type of crop to be grown in each bed. Digging is kept to a minimum and is limited to using forks to aerate topsoil and improve drainage where necessary. When beds are empty they are covered with black agricultural plastic, weighed down with old tyres, to reduce weeds, and lessen nutrient leaching from increasing rainfall. Use of the plastic is new as of January 2017 and has allowed an earlier and more rapid start to our sowing/planting season. Biodegradable, corn-starch based weed suppressant has also been used on experimental beds this season and has reduced weeding markedly.

Using horse powered land-working equipment to reduce labour has been experimented with as part of the commitment to tackling climate change and reducing fossil fuel use. Strong horse working skills are required and it has taken time to learn methods and teach the horse too, but it does show potential. Unfortunately, the land has become markedly wetter over the last five years and is remaining so for longer periods. As yet it is unclear whether horse drawn equipment will be viable on the land without major soil improvements in the long term.

Even with poor growing conditions Transition Turriefield perseveres with organic practice as an essential part of reducing fossil fuel use and protecting the environment. The project is not registered as organic due to the expense of ongoing registration and the impact of maintaining wider crofting practices in a rural and remote area.

Access to organic animal feed for example, is not economically viable and accessing organic compost for seed sowing is an ongoing battle. Compromises too, have had to be made with fossil fuel reduction, for example where plastics are used for polytunnel covers and weed suppressants. Maintaining best practice, financial viability and sustainability will always be an ongoing balancing act.

Crops are grown outside where possible, keeping the limited undercover space for the produce that really needs warmth and protection. During the short summer season aubergines, tomatoes, chillies, peppers, sweetcorn, pumpkins, courgettes, cucumbers and even melons can be grown undercover. By experimenting with sowing times and cultivars and using heat and light to start seeds off early, growing conditions can be manipulated to recreate suitable conditions and a long enough season.

To achieve maximum production from the short summer season a strict sowing programme is used starting in January. Crops are sown in modules timetabled to enable plants to be ready to ‘hit the ground running’, once conditions are suitable for planting out either in the tunnels or outside. Celery and celeriac for example, are sown in the second week in February under lights and on heated mats at 18-20C, potted up, grown on and hardened off to allow planting out in the field by the 3rd week in May. Harvest begins in late September.

Without additional heat and light, conditions would not be suitable for germination until April and the plants would not mature to a reasonable size before the growing conditions became unsuitable. A similar system and timing is used for aubergines, planted in tunnels and ready for harvest from mid-July onwards.

Raised beds are used for some crops and are proving useful for manipulating conditions to increase productivity. Both garlic and parsnips have benefitted from the warmer, better drained soil in the beds. Mini tunnels are used to improve crop performance when needed. Garlic appreciates the extra heat to produce good sized bulbs unattainable in open ground. Experimenting with black plastic as an aid to warming raised beds from March onwards has enabled earlier sowings of parsnip and beetroot, with crops producing excellent sized roots. Sowing in the field cannot usually take place until end of May due to low soil temperature and waterlogging.

Produce is sold through a veg box scheme, to rural community shops, a wholefood retailer in the main town of Lerwick and local hotels. The veg box scheme operates using a Community Supported Agriculture model. Box customers commit to financial support of the project for a season as well as contributing voluntary hours to vegetable production. This has been a successful m 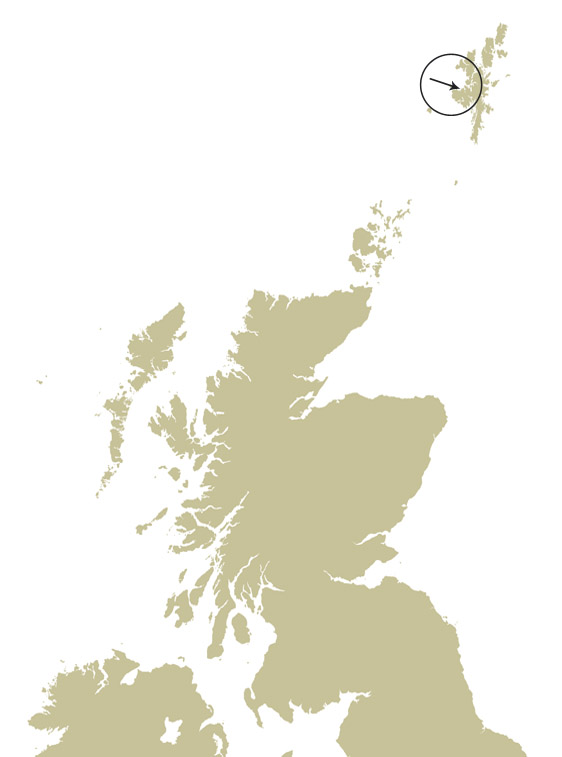 ethod of encouraging community participation in local food production and raising awareness food related CO2 emissions. Additional income is generated through training courses and workshops sharing the learning and supporting others to grow their own. The project works with both children and adults; schools, community groups and the local authority to raise awareness of climate change and encourage carbon footprint reduction.

The largest limiting factor for the project is the ability to grow enough produce on the site—to generate enough income to pay sufficient staff—to grow enough produce, and so on. These particular issues are no different to other, similar, small growing projects throughout the country. Though small the project already cultivates and brings to market a huge variety and quantity (10 tonne+) of crops each season. With further investment, soil improvement, increase protected growing and further experimentation, there is the potential to double the quantity of fresh produce for the Shetland community.

Transition Turriefield is run by Penny Armstrong and Alan Robertson.

Note on crops for our overseas readers: bere is a landrace of barley, kale is a leaf vegetable member of the brassica family, and neeps is turnip or swede.