The second cross quarter day of the year, in the first week of May, usually on the 5th, is  at the mid-point between the spring equinox and the summer solstice. Winter crops, sown last autumn, now cover the fields with a thickening layer of green. Most spring cereals have been sown, but in many areas the soil is still being prepared for potato . Leaves on the trees and hedges are sprouting. The May flowers are out. 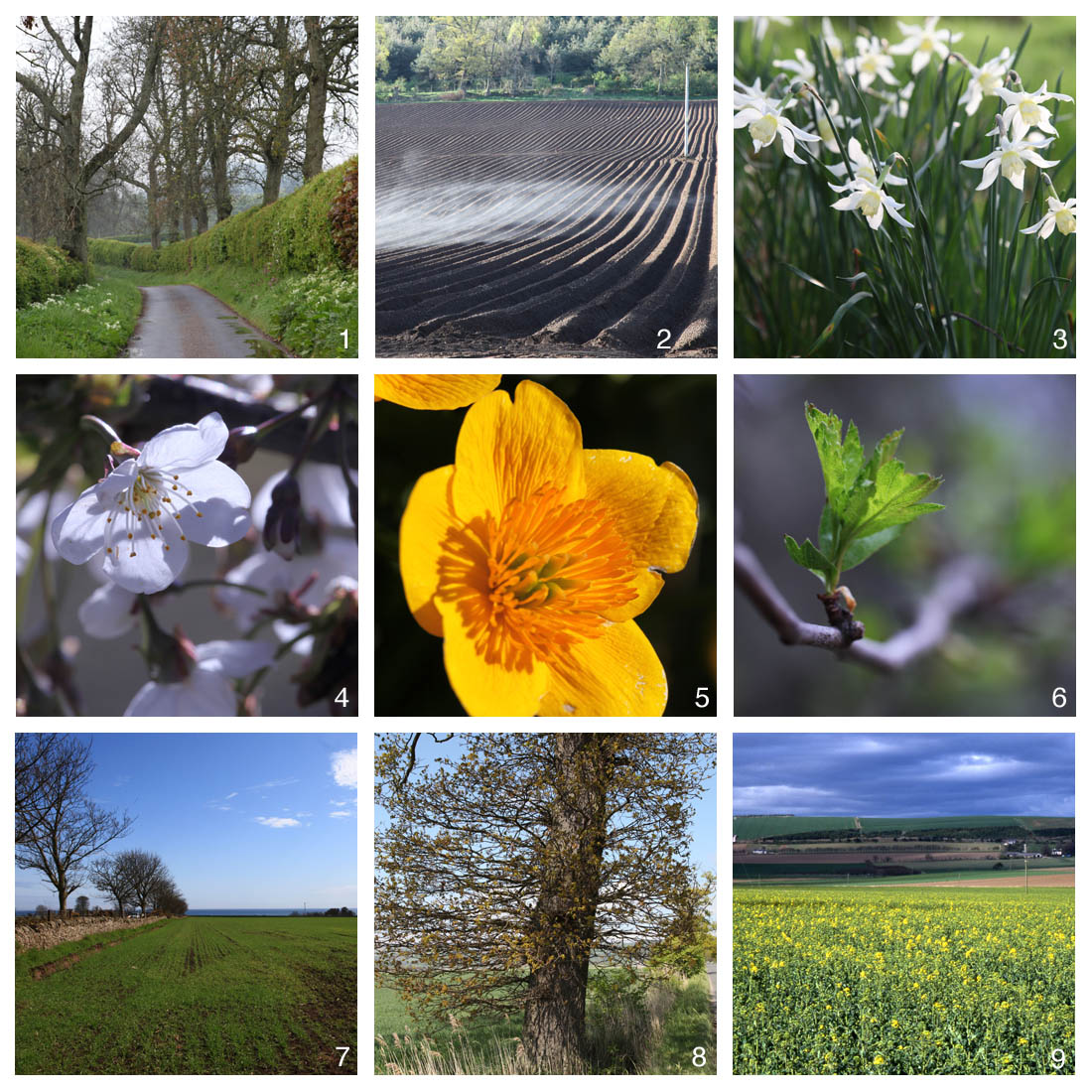 4 Gean, in flower, the second of the wild cherries, after blackthorn and before bird cherry. 5 Marsh marigold, its own fire-festival (LFG). 6 Hawthorn leaf unfolding at Balnaguard Glen, Perthshire.

7 Field of spring barley, sown mid-April and not long emerged – this field one of earliest fields to be sown 2014, in south Angus near the sea. 8 Oak, showing bushing on the lower trunk, leaves unfolding, Carse of Gowrie. 9 Winter oilseed rape, sown late summer or early autumn the previous year, coming into flower, Aberdeenshire near Inverurie.

The sun’s energy reaching the earth’s surface has increased rapidly in the six weeks since the spring equinox, and is now 10 times greater than it was in the depths of winter, and only 10% less than what it will be at the summer solstice in six weeks. 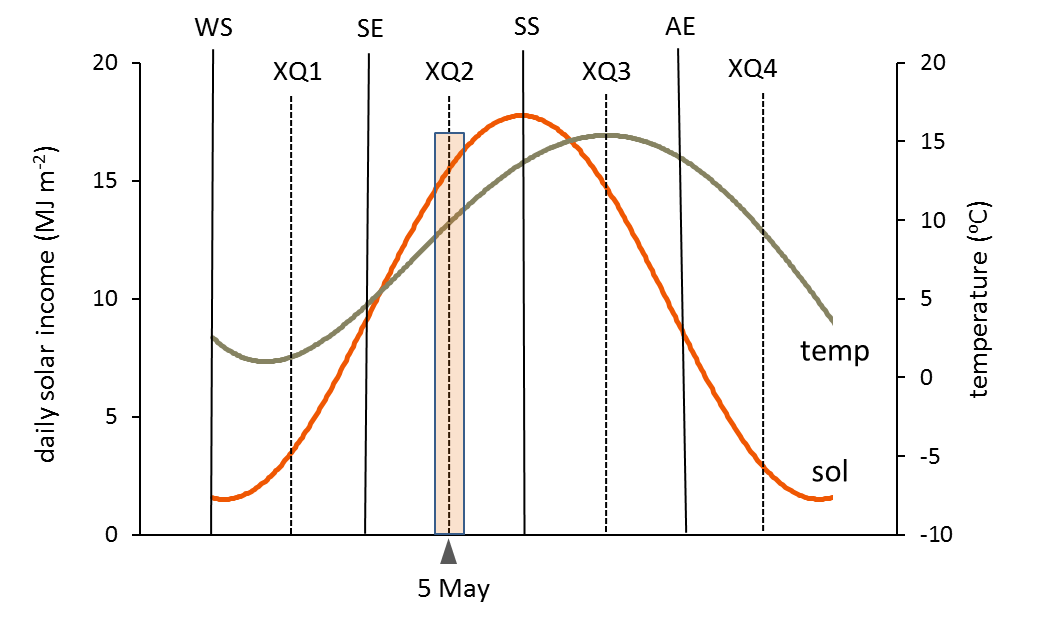 Temperature still lags, and is little more than half way between the low and high points of the year (the ‘temp’ curve above). It can be warm when the sun shines, balmy even, but cold rain and sleet can still numb the field worker.

[See The Year for a description of the sol and temp curves in the diagram above.]

At the second cross quarter day, light is about three times as long as dark. 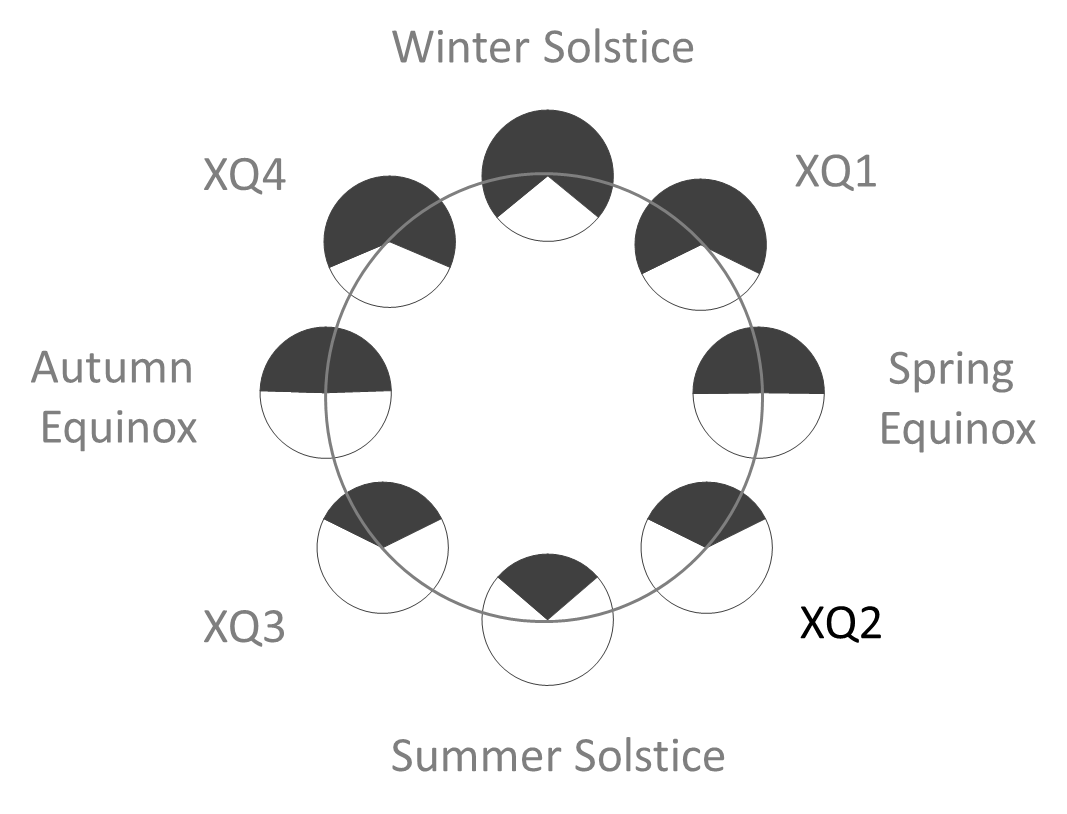 XQ2 in early May is the time of greatest difference between fields: winter oilseed rape well grown and in flower, winter cereals well greened and starting to bulk, spring cereals just sown and many potato fields still brown soil.

The sun approaches its maximum yet the landscape is still this patchwork of green and brown with some yellow. Sunlight hitting soil won’t grow crops. No wonder, for economical reasons, farming covers the land with fleece and polythene to encourage high-value crops to ‘speed up’.

But XQ2 is a great time in the farming year. Better than the spring equinox six weeks earlier. Summer light is already here and summer warmth is on the way.  The neolithic farmers of the croplands would have known by now whether their sown crops had ‘taken’ and what sort of harvest they might expect, given a typical year. What’s changed in 5000 years?

Festivals, events, song and music at the beginning of May.

Early May, the crops sown, the sheep and cattle out on the new grass, light, warmth and hope –