The spring equinox is one of the two times in the year when the length of day and night are the same. The sun’s yearly cycle will now  advance rapidly – the sun will travel higher in the sky, sunrise and sunset both move northwards and days will lengthen. 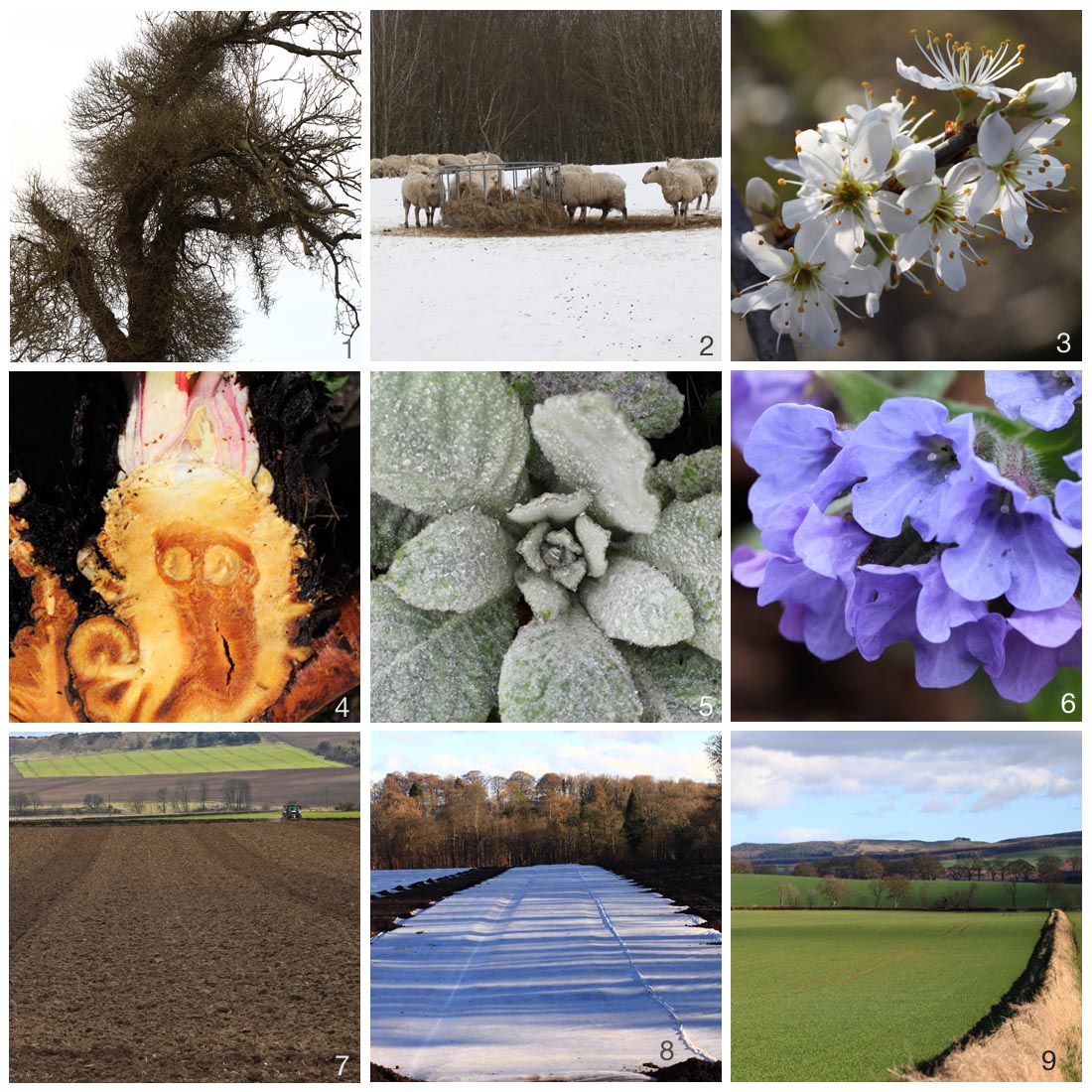 Images around the spring equinox

1 Upper part of ash tree Fraxinus excelsior overgrown with ivy Hedera helix, now dead having been cut near the base of the tree.  2 Sheep in the snow, feeding on hay. 3 Blackthorn Prunus spinosa in flower near the coast, a month before it flowers on higher ground inland (LFG).

7 Recently ploughed field, about to be sown with a spring cereal; the green of a winter cereal in the background. 8 Field covered with white fleece, in preparation for planting with a vegetable crop. 9 Winter cereal fields ready to bulk under an increasing sun.

The spring equinox is a time of increasing light but of generally little warmth. The incoming solar is half the high point it will reach in mid-June, yet the temperature has risen only a couple of degrees above the low at XQ1. 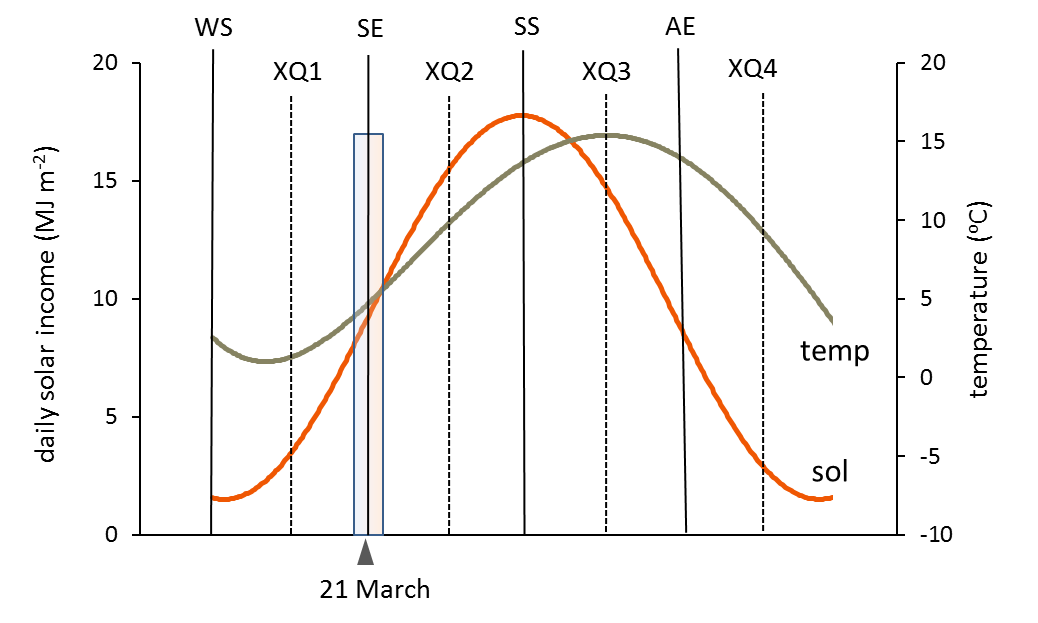 The weather can switch from bitter cold to spring-like warmth, depending on weather patterns west in the Atlantic, north in the Arctic and north east in the Baltic and Siberia.

The sun can warm your back. Gales can bring down old trees. Deep snow can still lie for weeks. Sun, sleet, rainbows – all within a few minutes. In many years, there is little sign that summer is approaching.

The wild plants are used to it. Deciduous trees such as beech and oak are nowhere near leafing. Of the shrubs and small trees, blackthorn might be flowering (without leaves) near the coast but will have to wait a month yet on higher ground. Few small plants are in flower – snowdrop and lungwort.

At the spring equinox, the hours of light and dark are equal. The  day’s now lengthen rapidly towards XQ2 in early May and the summer solstice in June. 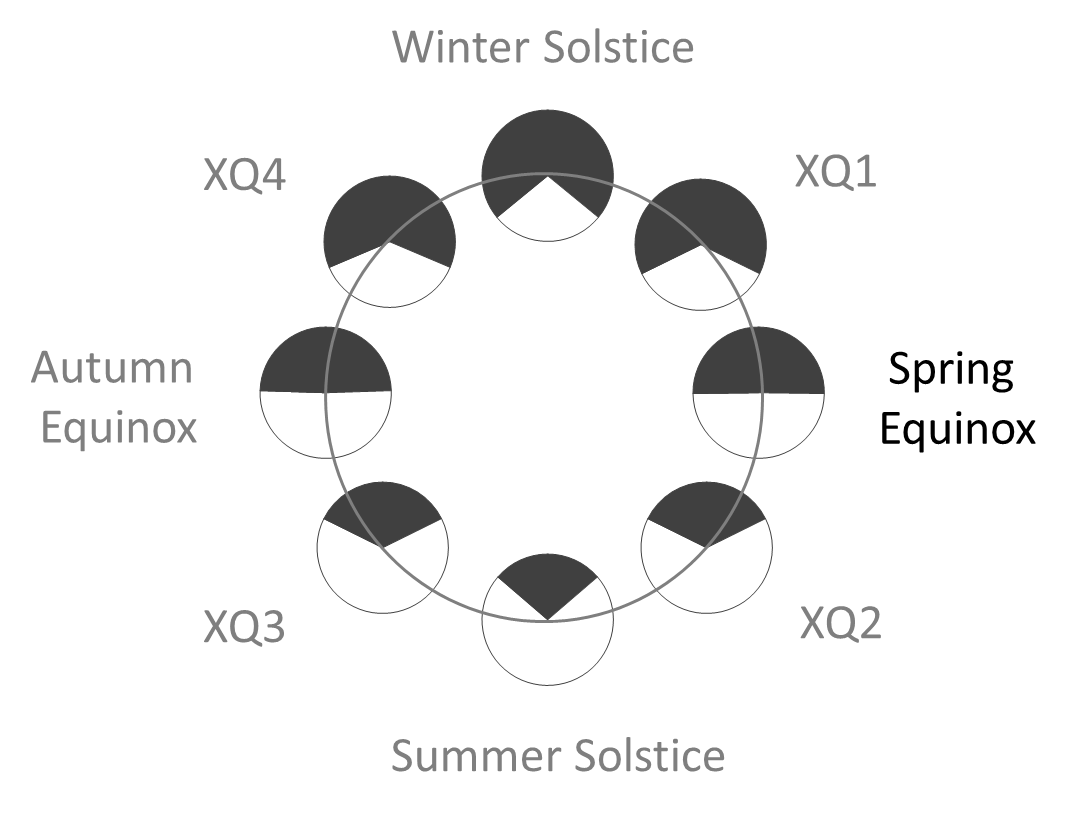 The coming increase in daylight hours is not the only change in the solar cycle. The sun rises higher in the sky and gives a greater intensity to the solar beam. So the earth receives solar energy for longer each day and at a greater intensity.  The rise in total solar income per day begins to accelerate rapidly through April and May, then slows to its maximum in June.

The winter crops, sown last autumn, are still recovering from the cold and wet of winter. Fields of winter wheat, barley, oat and oilseed rape mostly look green from a distance, but close up the rows are still not closed and gaps remain where the young plants withered or died. Yet generally, they are ready to take advantage of the gradual warming and increasing sunlight in the coming weeks.  In warmer microclimates, oilseed rape may even be extending its stems before flowering.

The main activities at this time of year are preparing ground and sowing spring crops. Fields left in stubble over the winter will be ploughed and the soil tilled to make a seedbed. On drier, easily cultivated soils, some crops may already be sown. Over the coming few weeks, the rest of the barley with some wheat, oat, beans and peas will go in.  After only a few days, their shoots will begin to appear through the soil. It will be less than six months to harvest for most of them.

The best varieties for the region make the highest ‘returns from investment’ in a biological rather than economic sense. Each plant has to invest in structures – roots, leaves and stems – that gain access to resources such as light, water, nitrogen and phosphorus. But if they are to reproduce and yield grain, they have to get back a surplus, that is they must return more than they invest in resource-capturing structures.  In much of the world – where water and nutrients may run out part way through a crop’s life – the returns do not always match the investment, resulting in little or no grain.

In the croplands, the autumn-sown varieties invested heavily in root and leaf before the winter, first to better their chances of survival and then to be ready to soak up sunlight in spring. In a severe winter, that investment may be wasted, but generally, the plants survive and gain a generous return from April to July . There is more pressure now on the spring-sown varieties. They need to move quickly – germinate, put down roots and extend their first few leaves to enable them to begin generating a surplus after the first month or so.

In north temperate lands, the yearly cycle of temperature still lags well behind the cycle of solar input, but in Mediterranean lands, many plants are now into full flowering. They have evolved and adapted to take advantage of the early warmth, because in a few months it will be too hot and dry for them. 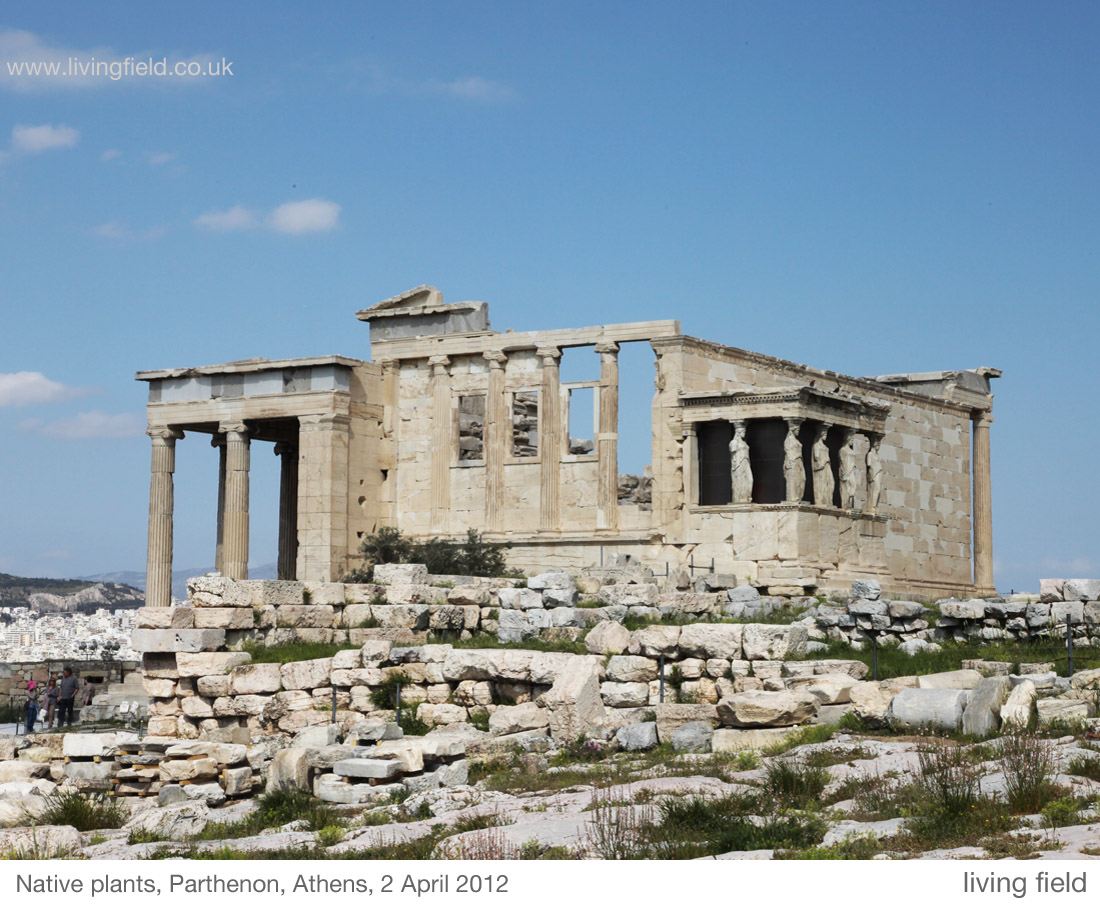 The hills around Athens display their botanical diversity at this time of year. They inhabit the cracks and fissures in the rock on which the Parthenon is built. They are part of the antiquities, not detracting but adding a continuity of life to the ruins.

In this nitrogen poor habitat, shrub legumes thrive, fixing their own nitrogen from the air. 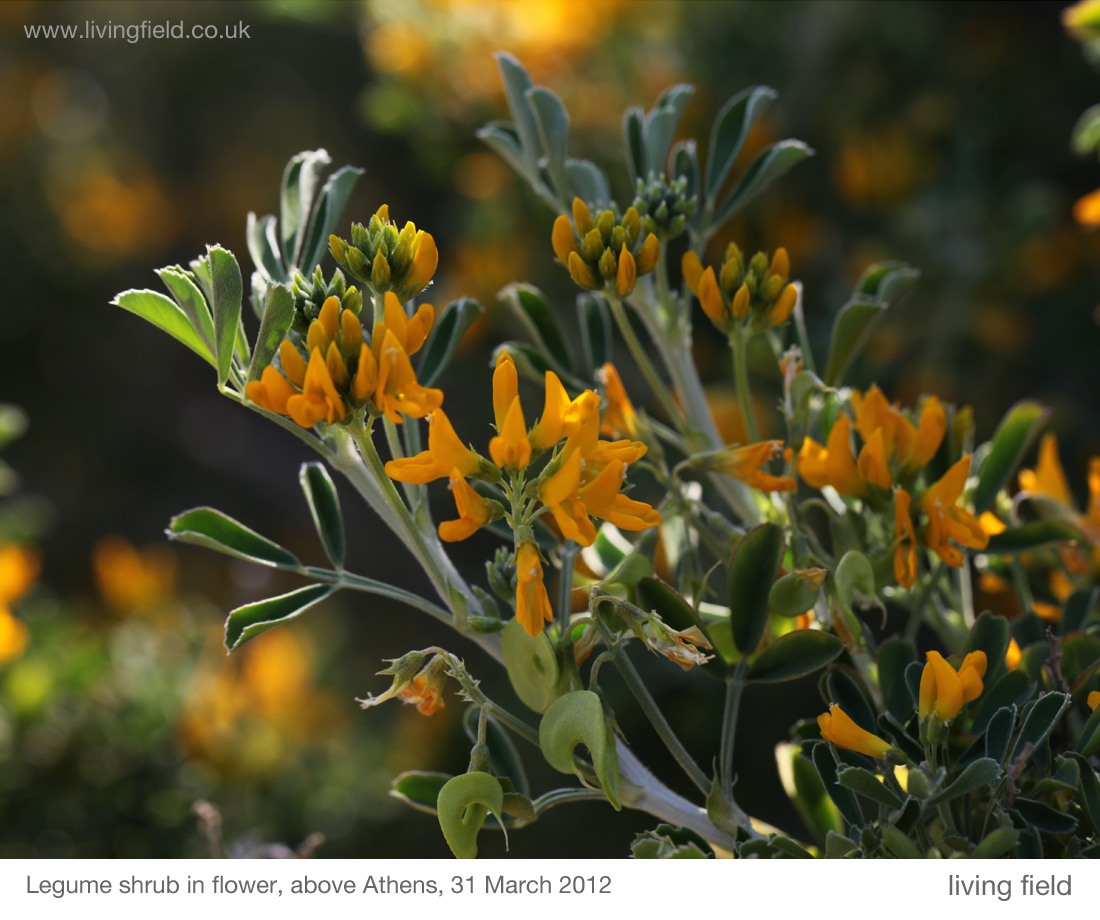 Also on this site Wild Plants of the Acropolis