The Living Field garden, in its own small space, shows how plants and people adapt to the seasons in the surrounding cropland. The local plants tend to be tuned to the seasons, but the crops always seem to be a bit out of phase. Why is this?

A defining feature of latitudes 55 to 60 degrees north in Atlantic north-west Europe is that the annual cycle of temperature lags well behind the annual cycle of solar income.  The earth cools down in winter then takes time to heat up in the spring. By early autumn it’s still warm but the solar income is falling day on day. (See graphs lower down for examples.)

The ‘tension’ between the cycles of temperature and solar income came to be understood thousands of years ago by the first migrant farmers to cultivate fields here.  Modern farming, with its machines, agrochemicals and advanced crop varieties, can’t avoid this tension. If farming gets it right, then the corn yields are the highest in the UK. If not, there can be heavy losses. 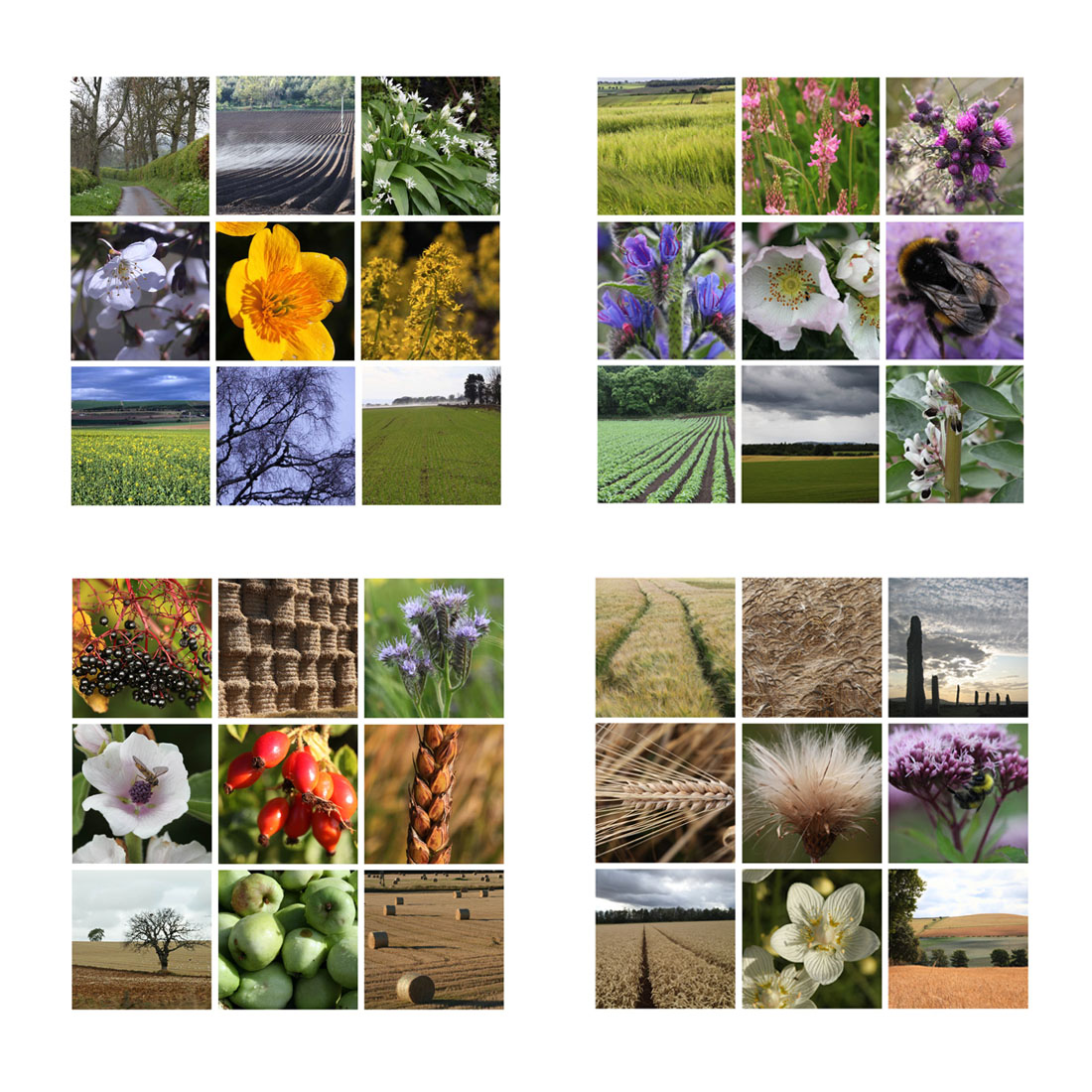 The quarter days – the summer and winter solstices and the spring and autumn equinoxes mark the cycle of solar income (see Energy and light: no life without the sun), but at these northern latitudes, the cross quarter days (in early February, May, August and November) are a better guide to the yearly temperature cycle and much of agricultural activity.

Here we look at the year in the croplands through these quarter days and cross quarter days. We begin with sets of nine photographs (examples above), each first posted under Notes Images, then described in more detail on pages accessible from the links below or in the right hand menu.

The sun’s energy and the earth’s temperature

The graph below compares, day by day, solar income (red) and temperature (brown-grey) during a year, starting at the winter solstice to the left and progressing through the summer solstice in the middle and back to the next winter solstice to the right.  For each of solar income and temperature, the variation even over a few days is enormous, and this is typical of the north-east Atlantic Maritime region (three seasons in a day, four in a week!). Yet despite the variation, there is a strong annual cycle shown by the fitted curves (the black lines), which are a sort-of-average-trend through the variation.

So where do the quarter days and cross-quarter days fit into these cycles? The graph below simplifies the upper figure by omitting the day to day variation and showing just the fitted lines – red for the solar cycle (sol) and in brown-grey for the temperature cycle (temp).

The solar curve (defining the quarter days) is almost symmetrical, the upward part  mirroring the downward. But the temperature curve is offset to the right, and this is the cause of the ‘tension’ referred to above. 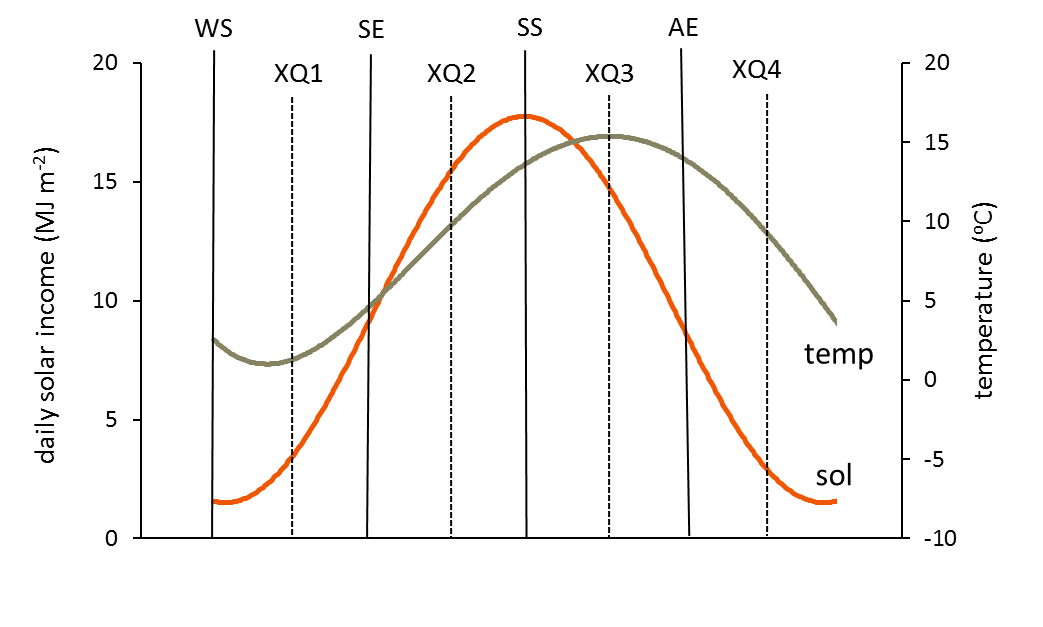 The year’s cycle is represented in the diagram below by the length of night and day at each of the quarter days and cross-quarter days. The diagram is reproduced on each of The Year’s pages. 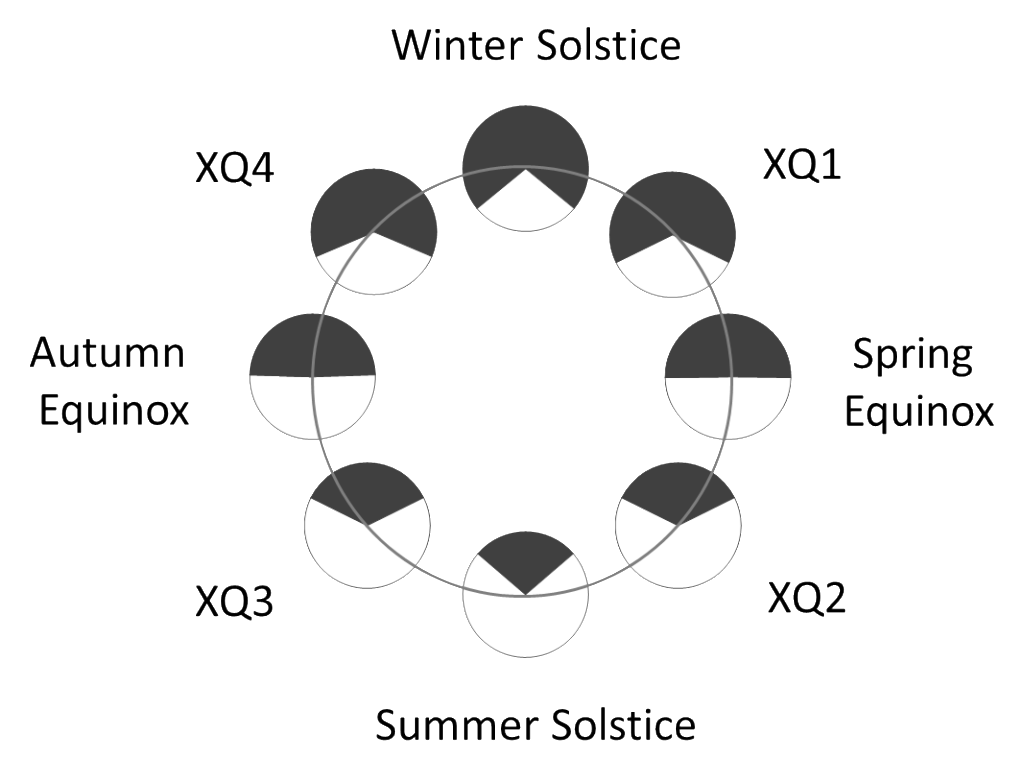 Sunrise and sunset values at each time  were taken from interactive databases at the US Naval Observatory at the Naval Oceanography Portal. For more information, including links to these databases and ways to find your latitude and longitude, see Energy and light: no life without the sun.

So if many of the ancient festivals and feast-days are aligned with the cross-quarter days, is this chance or is it something to do with the special significance of the cross quarter days to agriculture …

Art, literature and the tradition

For each quarter day and cross-quarter day, The Year is introducing a selection of art, craft, festivals, songs and tunes from the tradition made, written for or performed around the time of year. Among recurring sources are –