[Translation of the leaflet for an exhibition held in 2015]

Celebrating the 100th Anniversary of her birth

You are cordially invited to the opening of the exhibition to be held on Monday 23 March 2015 at 6 p.m. at Jamova cesta 39 in Ljubljana. 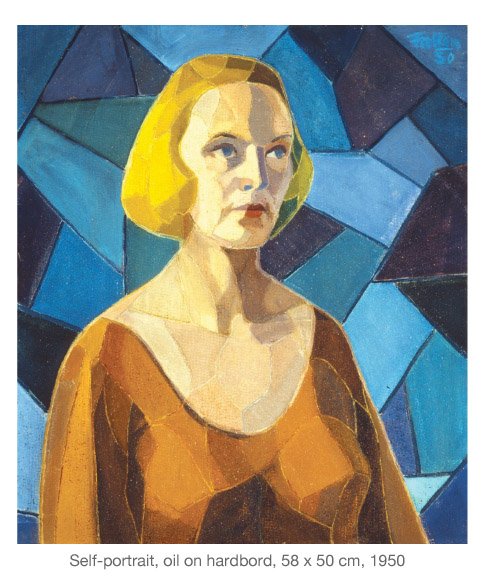 The artistic work of Vida Fakin always stemmed from her loving relationship with mankind and nature. Her distinctive talent as a portrait artist came to light in her early work even before her studies, when she painted the parents of her husband, writer Igor Torkar, in the spirit of pre-war colour realism; later she portrayed other family members including herself, her daughter and granddaughter in that same spirit, but with a more pronounced colour subtlety, applying delicate tenderness to express an inspired and convincing internal expression. Her compassionate attitude towards humanity is most strongly expressed in the image of A Couple, where she moved away from portraits, portraying the anguish and love of a lonely pair in a dark world through her stylized figures embraced in the gaze of houses. The essence of human relationships and the relationship with the world is expressed in bluish dark colours, which eventually became the painter’s basic life tone that expressed her feelings and in general her often supporting atmosphere: the poetry of a soft and stylish nocturne before the fatal twilight, which mysteriously draws attention to the vulnerability and insecurity of the human race and the surrounding natural world.

The nucleus of Vida Fakin’s art stems from her extremely emotional experience of nature, which the artist experiences so strongly especially as her colour harmony. In the shelter of the landscape, the hay rack as the artist’s fundamental motif became a herald of her feelings and messages in an indissoluble bond with the changing colourful shades of nature – almost anthropomorphic and butterfly winged, increasingly transformed into a dreamy and distinctly magical illusion. 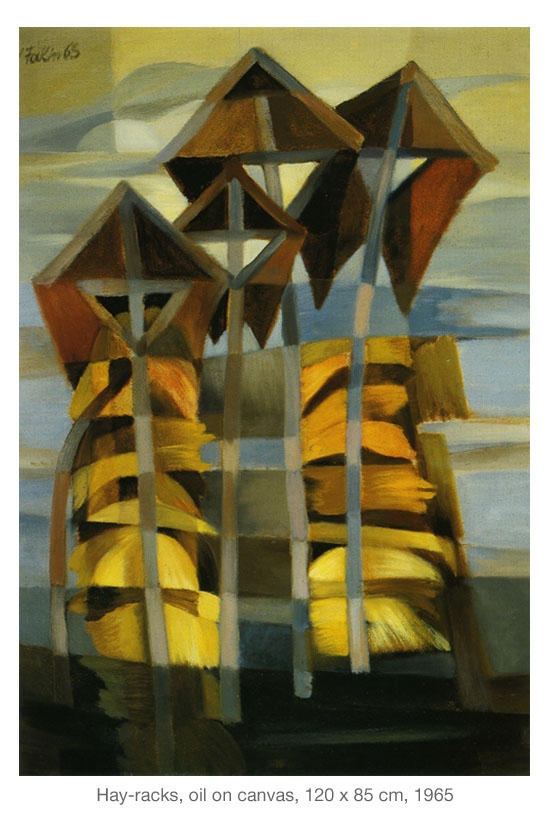 In the explicit artistic sense, the artist initially focused on this motif due to its architectural design, which lead her artistic brush from realism into contemporary artistic expression. In the 1950s, the artist gradually levelled her hay racks along with increasing stylization, transforming them into geometric shapes as a mark of the times so that they formed a geometric grid, allowing through the flashing light and harmony of emancipated colour accents, similarly to her artistic treatment of flowers, especially sunflowers, and some figural paintings, in particular in the serene self-portrait wearing a striped summer garment and posing at the foot of a tranquilly-stretched hay rack. Then the hay rack evolved into an even more fantastic unearthly creature which the artist attempted to spare from the increasing desolation of the Earth by transferring it into a pristine sky, essentially into the perpetuity of her own soul, as if attempting to against all odds preserve her life dreams of beauty and harmony and protect the integrity of the ideal world by turning it into a spiritual vision. However, while dancing across the sky, although torn from the Earth, her hay rack remains connected with the hilly rug of the earth as a kind of associated, flapping dance costume, concisely broken down into linear rhythms and melodically coordinated colour accents. 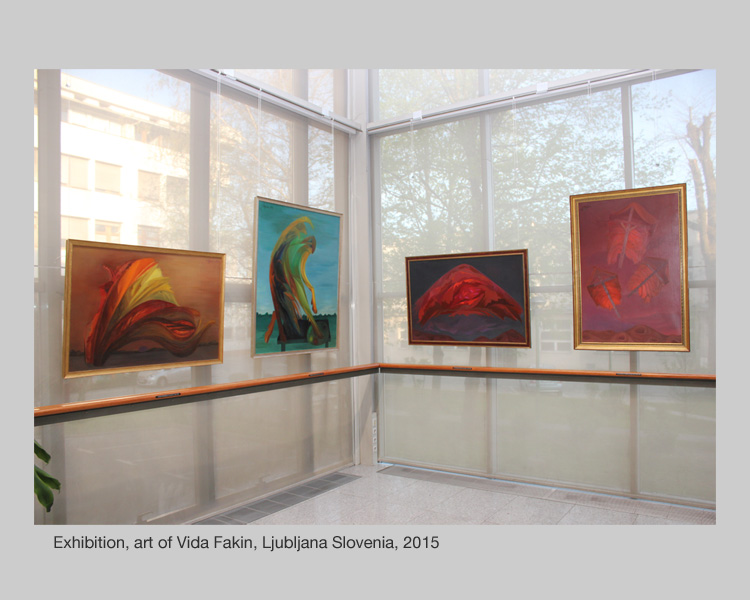 In particular, some of her straight-facing hay racks in their fierce and fiery colours are perceived in the sky as real burning bundles of straw, their elegantly elongated and winged figures harmonized in particular with a spiritual atmosphere of the veiled blue sky. Their design is imbued with an arabesque breakdown of characteristic colour symmetries, so that artistically the images appear highly sophisticated and spiritually revived by convincing poetic vision, in which their earthly reality is immersed into the blue and harmonious cosmic expanse.

In her core life cycle, the artist links the richness of rhythms and colour shades in these scenes into an almost symphonic melodiousness of the typical colour harmony, creating a declining, but still alive, poetically accentuated and moon-like atmosphere that is far distant from the brutal reality. As if she could hear the whispers of time, in the last few years of her life the artist abandoned her previously precise breakdown of life and with eruptive originality formed some picturesque landscape panoramas whose darkness is rhythmically seeded with red tongues of flame like flowers or bonfires, thus uplifting the earthly nature into a landscape of her own soul, perceiving it as a world inhabited by the blazing flames of human hearts. This brought her artistic poetry closer to the mystical perception that captivates us with its burning breath. 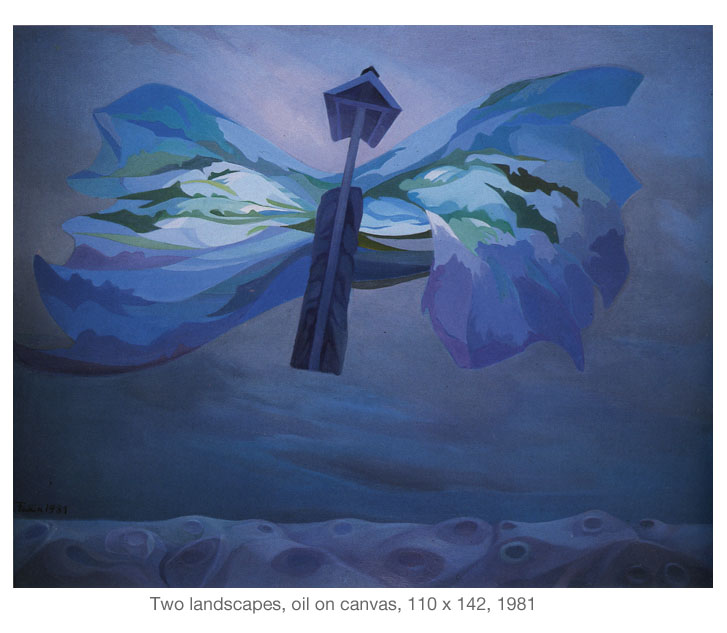 The artistic work of Vida Fakin, as part of the search for a post-war style, is a distinctly independent and aesthetic researched chapter of our artistic creativity, which has with its authentic intimacy and cosmic vision earned a new, more absorbed attention as we celebrate the centenary of the artist’s birth. In her sophisticated, extremely talented creative life, not only as a painter but also as a dancer, theatre performer, musician, verbally talented and universally cultured and educated artist, she shared with us her dreams of the world, symbolized through our identity with landscapes covered in hay racks. The artist spontaneously transformed this typically Slovenian and much loved symbol into her own most universal artistic image, raising it to the celestial spheres, where she projected all of her dreams, her joy and her pain. In her most difficult moments, she at times projected her elegiac expression into the harmonious motif of the mythical Pan or the tempestuous and anthropomorphic image of a scarecrow, where the Gorenjska farmer is transformed into an equally fantastic vision of a morning, evening or night guard.

The entire artistic world of Vida Fakin spans between the earthly reality and an intangible apparition. Due to the loss of cultural heritage and the natural landscape, the artist perceives the perspective of reality as tragically hopeless, while the illusion provides the embrace of redemptive dreams that lift the artist, filled with romantic faith, into a better spiritual world, far above reality. This is why her images of flying hay racks hovering above ground craters are often meaningfully entitled as “Two landscapes”: real and dream-like; the first devastated and the second thriving in the shelter of spiritual artistic images.

The artist lifted her dream-like hay racks into the sky as a sign of her faith in the spiritual salvation of the world and her trust in the indestructibility of beauty symbolized by the hay rack creatures along with their colourful drapery, covered with colourful blooms of the charming Slovenian soil. In a gentle, and inviolable fairy-like, pastel-coloured, warmly expressive and rose-tinted moon-like spiritual world, the artist lit her last inner flame which we perceive much like her hay racks hovering above the disaster-stricken planet as a mysterious warning and a loving spiritual testament. It is here that we can perceive the radiating and lively fire of the artist’s heart, lighting up the life with hope and giving it a celestial and cosmic meaning, inhabited in her poetically restless art.

Art historian, member of the Slovenian Academy of Science and Art. 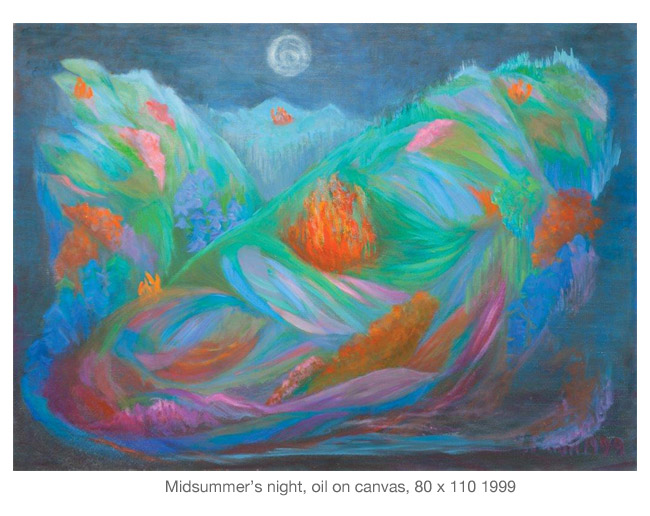 And a note on her  life:

Vida Fakin, nee Lojk, was born on 6 April 1915 in Ljubljana, where after her graduation from secondary school she went on to study Germanic languages. In addition, she attended expressive dance lessons with Prof Meta Vidmar for four years and published several dance reviews. She was also attracted by the theatre. Between 1944 and 1945 she attended the Gorše school in Ljubljana and in 1949 graduated from the Academy of Fine Arts. In 1953 she qualified as an art teacher and over the next 30 years she successfully taught art and art history classes at various secondary schools. She held several notable solo exhibitions and participated in numerous group exhibitions both at home and abroad. In 1983, she received the Župančič Award for her artistic achievements. In 1994 her monograph was published by the Enotnost publishers with the text by Janez Mesesnel and reprints of critical acclaims of ten art critics. Vida Fakin died on 10 June 2001 in Ljubljana. 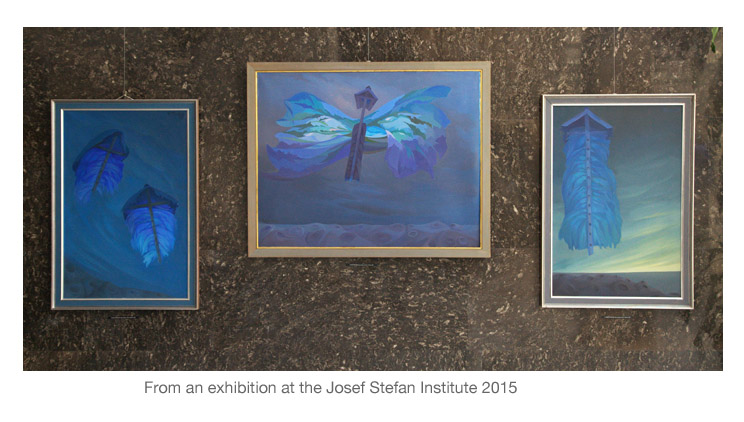 [Back to main page on Vida Fakin]