Is the image below a mythical figure, facing right, unnerving eye at two o’clock, mottled complexion, black hair flowing with grey streaks to the top left and cloaked hand with thin finger pointing out to the East? 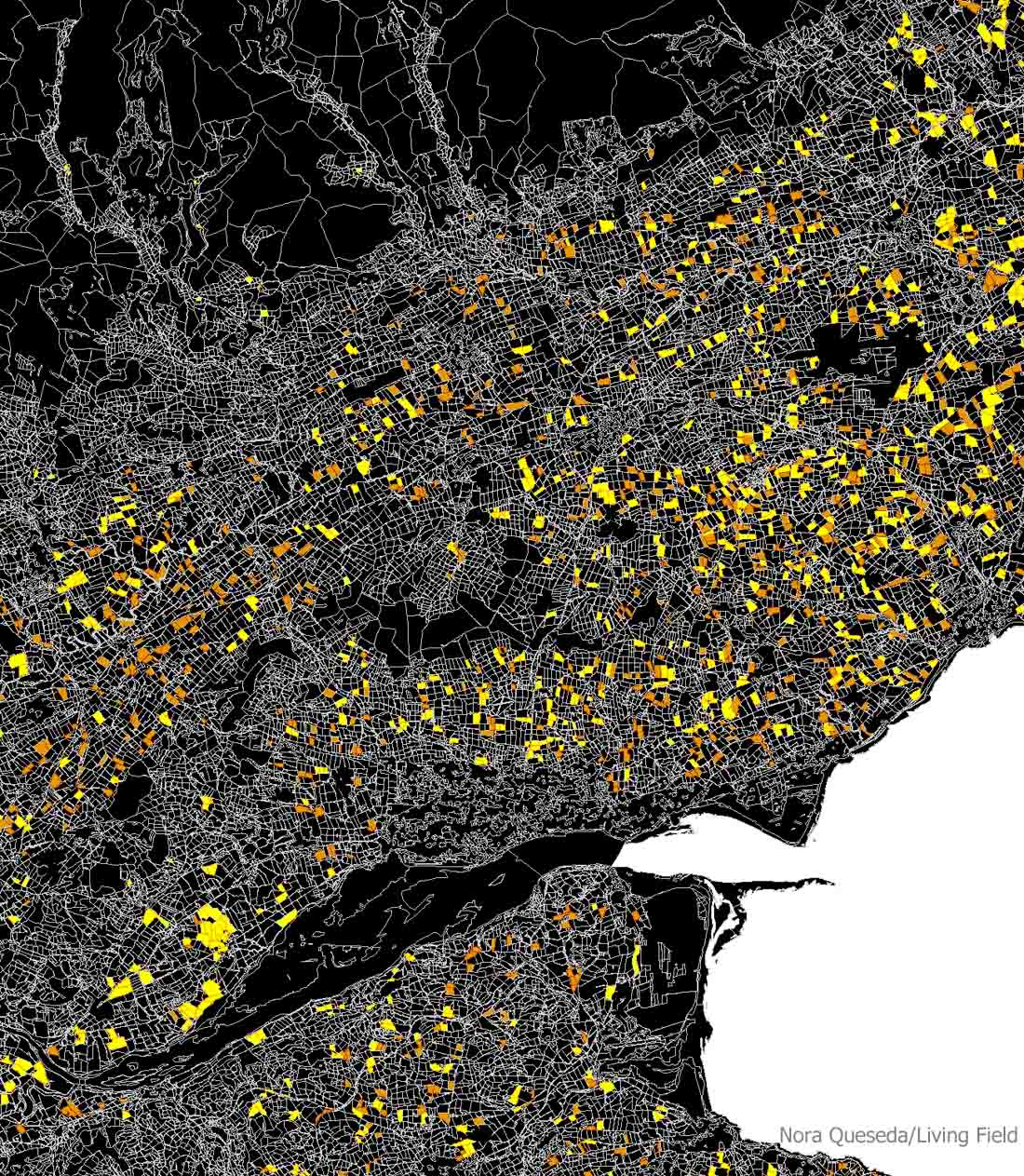 No … it’s the mythical landscape around the Tay estuary (black shape, lower third), taking in north Fife (lower) and extending through the agricultural land of east Perthshire and (right) Angus, then over the Sidlaw Hills, across Strathmore and on the higher land to the north.

The silvery-grey threads are the boundaries of individual parcels of land, usually cropped fields in the lower two thirds, and then larger grazing areas to the north. Each field is filled with a crop such as barley, wheat, oat, grass, potato or oilseed rape.

But two of the crops have been identified by colours. Look at the positions of the yellow (oilseed rape) and brown (potato) shapes. Each is a distinct field.  And see how the fields of these crops are arranged. Some of the yellow fields are blocked – look to the lower left or top right – while others are  spread apart, not touching. Blocking suggests someone is managing the locality as a unit, grouping fields together for ease and economy.

In some places, the yellow and brown are mixed together, but elsewhere there is mainly brown or mainly yellow.  These arrangements of fields have important effects on the ecology – on plant life, on animals and on movements of water and soil across the region. (Yes …. each year soil moves around this landscape!)

So what is it in a local landscape that affects what goes on in and between fields?  A first step to measuring these influences is to create ‘small worlds’ around a point of interest.

The small world above has a 5 km radius. Fields are coloured by what is grown in them in a particular year, e.g. cereal crops or grass, and just as important, what is not grown as a short-term crop but left undisturbed, e.g. woodland and other semi-natural vegetation.

The landscape can be quantified by the size of the fields, the connectivity between fields, the arrangement of groups of fields and how much disturbance each field gets. There are areas where many small fields are grouped together, and others where the fields are all aligned in the same direction (e.g. one o’clock top).

Also, look at the dark green shapes – they are woodland – the ones top left are joined up, but those elsewhere are mostly not directly connected. The degree of connectivity in a landscape has a strong effect on how plants and animals move through it, and how water and soil can be prevented from moving through it too quickly.

The small world described earlier is reproduced in the image above (left) and compared with another landscape shown at the same scale (right). Immediately there are differences. The one on the right has less grass and trees but more cereal crops (orange); also the fields are bigger. The right-hand world is farmed at a higher ‘intensity’ than the left hand one; on average the fields get high loads of fertilise and pesticide.

The pattern made by the boundaries of fields gives clues as to their history and pointers to the likely connectedness of fields. The image below shows a tracery of field boundaries, and occasional blue shapes, where the vegetation is classed as semi-natural, not disturbed every year to grow crops or feed stock.

The web shows a circular pattern in the upper centre of the image – evidence perhaps of a single farm originally located near the centre but moving out over time as it converted open land into field. At some point the circularity breaks down and fields take on a different arrangement.

Some animals would benefit if they could use the blue as a whole, but to do this they have to move between the shapes. This is where the web of field boundaries comes in. And it’s not just the existence of the boundaries, but their form: a thick hedge may offer better connexion for small mammals than a post-and-wire fence. Over time, boundaries can be managed to offer good lines of connexion.

Nora Quesada Pizarro (MSc), from Barcelona, is working at the James Hutton Institute, Dundee, on the influence of landscape on the movement of crop pests and other animals. She previously worked with the Forest Science Centre of Catalonia.

Graham Begg (PhD) is a modeller and landscape ecologist in the Agroecology Group at the James Hutton Institute, Dundee. 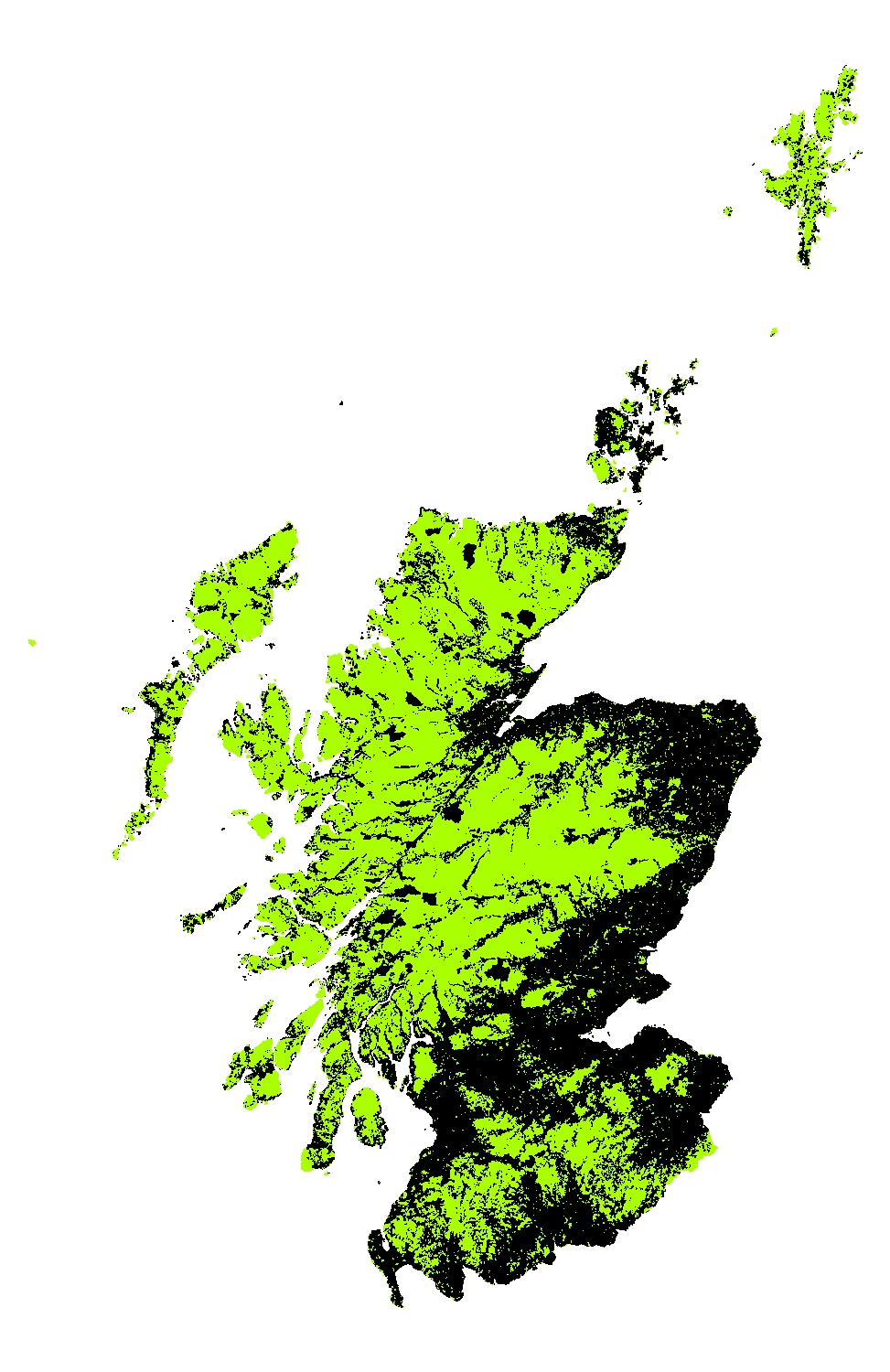