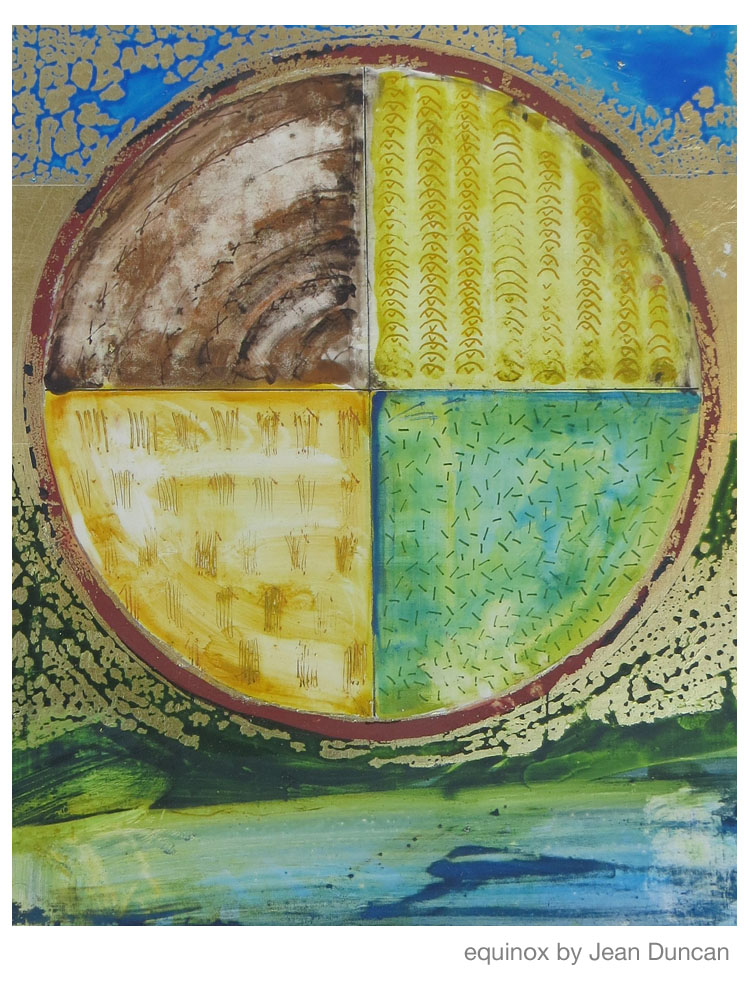 There are three recurring themes in her work. One is the annual cycle of solar light, and particularly the way people have sensed and measured the sun’s height and direction. (An example is equinox above).  Another is the succession of vegetation after the retreat of the ice: scree, forest, the first crops and through bronze and iron to  the high-intensity farming of today. The third is the usefulness of plants  – the essential cereals, the nitrogen fixing legumes, the herbs and medicinals, the nuts, fruits and berries, the fibres and dyes.

Her Teaching Wheel is designed to show the plants of the Maritime Croplands now grown in the garden, in the annually disturbed plots for crops, the cornfield, the perennial meadow, the hedges and trees and the pond and ditch.

[Click on the wheel above for a 2200 pixel square image.]

5000 years passed after the ice retreated before agriculture began, and 5000 more from then to the present. In that time people have gathered, grown and used innumerable plants for their various needs.

The wheel is also designed to contrast the different growth forms of the plants and the useful products derived from their various parts.

Over 2014/15, she offered a set of nine pen and colour drawings,  sparse yet capturing the essential architectural line and form. Apart from the ancient corn (cereal) plants, most have been commonplace in recent times, but such have been the changes in cropland that many are now not recognised and their uses and significance have fallen from collective memory. The Living Field hopes that by bringing these plants to attention again, their value might be more widely recognised.

Below is her Teasel.

A collection of all nine plants is shown below in the one figure. Prints of each will be on display at Open Farm Sunday on 7 June 2015.

The lure of medicinals and poisons

Plants that cure will also often kill. The difference lies in the growing conditions, the genetic type and the method of extracting the active ingredient. The spectacular flowering displays of the foxglove and opium poppy – both yielding medicinals and poisons – are captured in Jean’s watercolours.

This pencil and watercolour opium poppy Papaver somniferum results from one of her visits in late summer 2014.

And paired below are foxglove Digitalis purpurea and another opium poppy.

And here is a watercolour sketch of birch trees, the source of wooden utensils, building timber and dye.