Jean Duncan, who has been working with the Living Field over many years, collaborated in 2014/2015 on designs and downloadable educational material to celebrate 10 years of the Living Field Garden – examples at Anniversary Designs and Sketches. She also worked with several Hutton scientists on The Beauty of Roots exhibition and on material for conferences on native seed and legumes.

Latest ….. In the Kingdom of Roots

The Josef Stefan Institute, Slovenia recently hosted in 2021 an exhibition of her work with the title In the Kingdom of Roots. There is a great video/film of the exhibition viewable at this link.

Further to The Beauty of Roots and Anniversary Designs and Sketches (links above) we have pleasure in listing some of Jean’s other contributions to the Living Field: 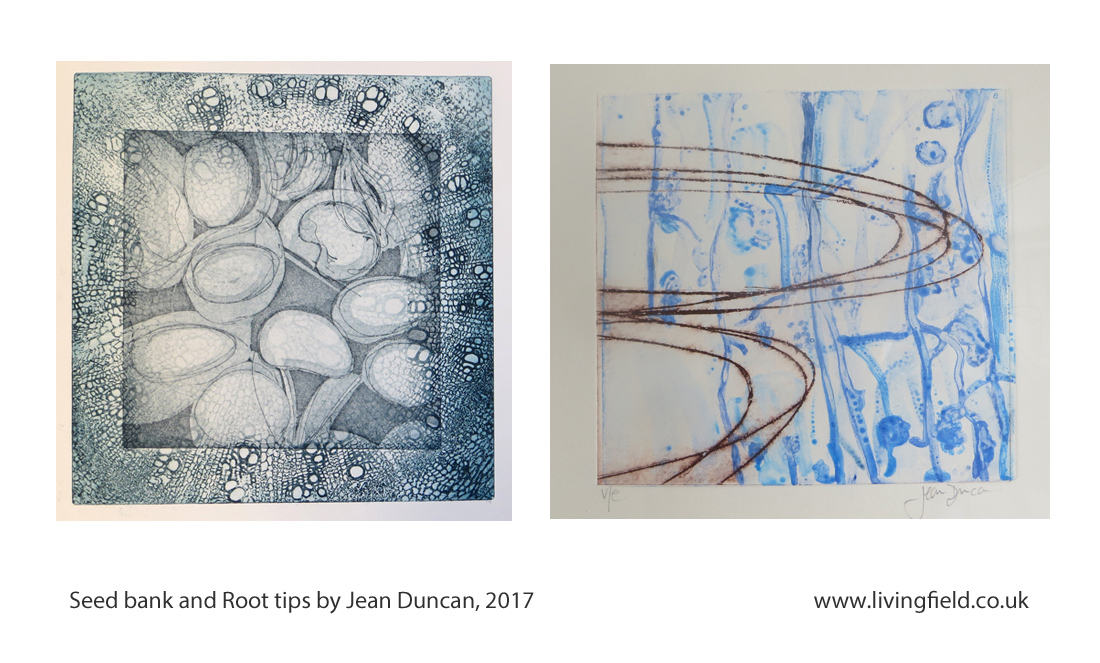 Visit Jean’s own web page and see below for some examples of her earlier work.

Jean is exhibiting at Wall Projects Montrose along with other artists from 26 July to late August 2015. See Empire for dates and place.

“John and Alexander Duncan, sons of a merchant from Brechin, and both surgeons with the British East India Company, took advantage of the opportunities afforded by trading links in the expanding empire to collect plants for Joseph Banks, the first director of Kew Gardens. Alexander collected the first tree peonies to survive the trip back to the UK from China. After the original peony died at Kew the only surviving specimen was growing in his garden near Arbroath, and a descendent of this plant has now been moved to the Royal Botanic Garden in Edinburgh.

“Jean has recorded the peony as it grows today and made drawings from the earliest Chinese specimens in the Herbarium at the Royal Botanic Gardens. The work includes references to letters and diaries from Alexander and John’s time in Canton and to their determination to bring back a live plant, only becoming successful after repeated attempts. The work of such early botanists was inspired by Chinese flower painters, wallpaper designers and potters, works initially thought to be fantastical but which later proved to be very accurate in their execution.”

Jean was commissioned to produce designs for backdrops that were projected on to the stage during a performance by St Andrews Opera of Handel’s Acis and Galatea, in which an external threat challenges an apparent rural peace.

There’s more to it than that in the original by the writer Ovid, and in the opera itself, but the particular interest here is Jean’s use of certain motifs from the Living Field, specially in the depiction of ancient cereals in her circular designs which were projected onto the backdrop during the performance. The one that revolved during the first half is shown below. The image was in the form of a circle that rotated almost imperceptibly as the story unfolded. 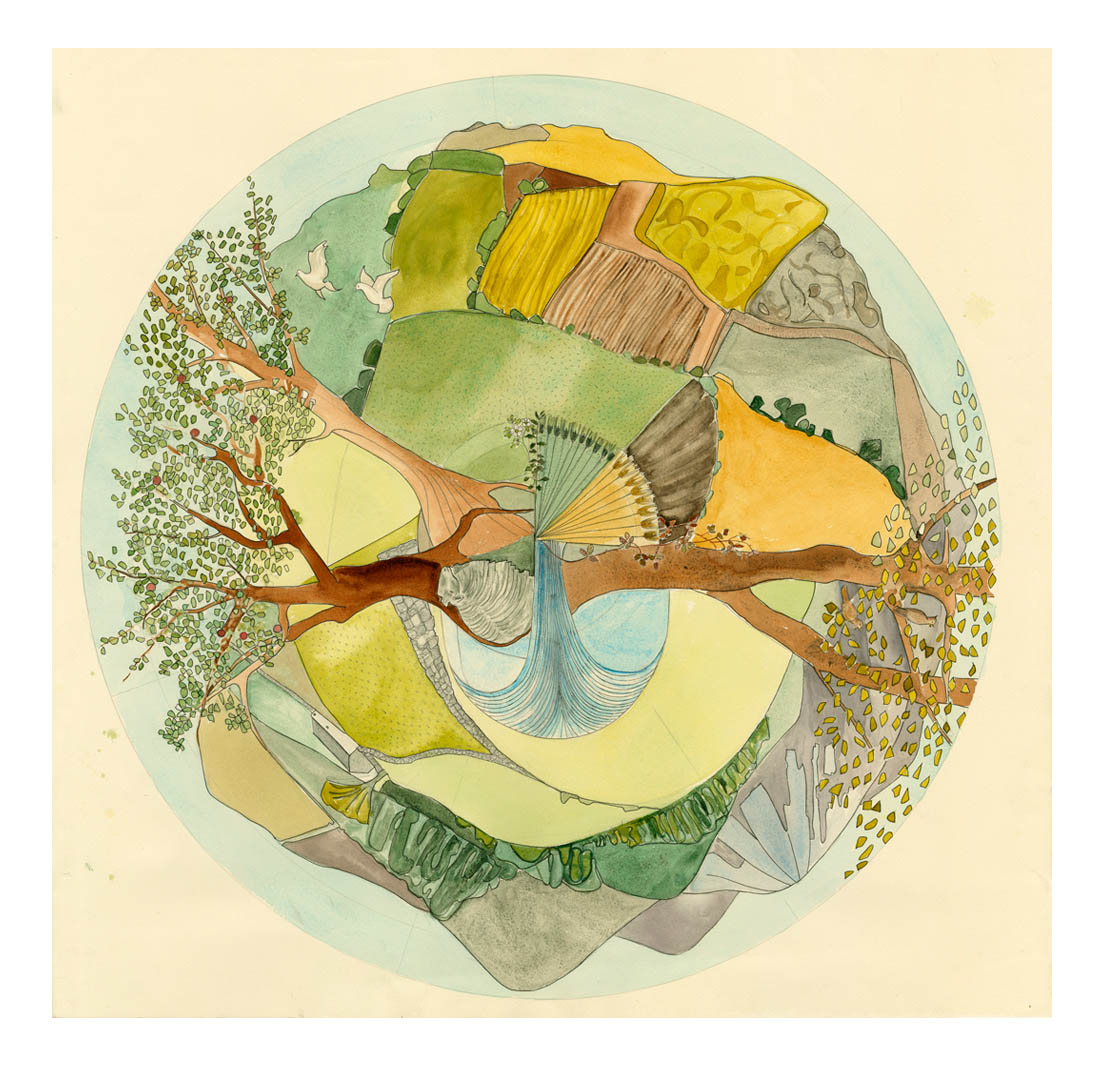 Among the detail, near the centre, were drawings of cereal plants, modelled on the emmer wheat Triticum dicoccum, an ancient grain now absent from the croplands, but grown in the Living Field garden in recent years (top right below). And also of a sheep (top left below), curled in the bole of a great tree, and suggestive of the transformations that Ovid wrote about in his notes and essays from antiquity.

A series of paintings featuring the plant Capsella bursa-pastoris, shepherd’s purse, began during Jean’s residency at Dundee (see below) and continued during her work with the Living Field.

Shepherd’s purse was in Scotland when the first crops were grown here over 5000 years ago and has lived within agriculture as a weed ever since. It is also an ancient medicinal plant and salad vegetable,  forgotten by western Europe, but still found on market stalls, dried and for sale, in parts of eastern Europe and beyond.

Jean got to know shepherd’s purse working with Pete Iannetta, from the James Hutton Institute, and Wenni Deng, a doctoral student. Capsella is a model of resilience: still here after thousands of years of agriculture and several decades of intense farming. It prospers through variability in shape and form and in the speed of its life cycle, outwitting attempts to remove it. 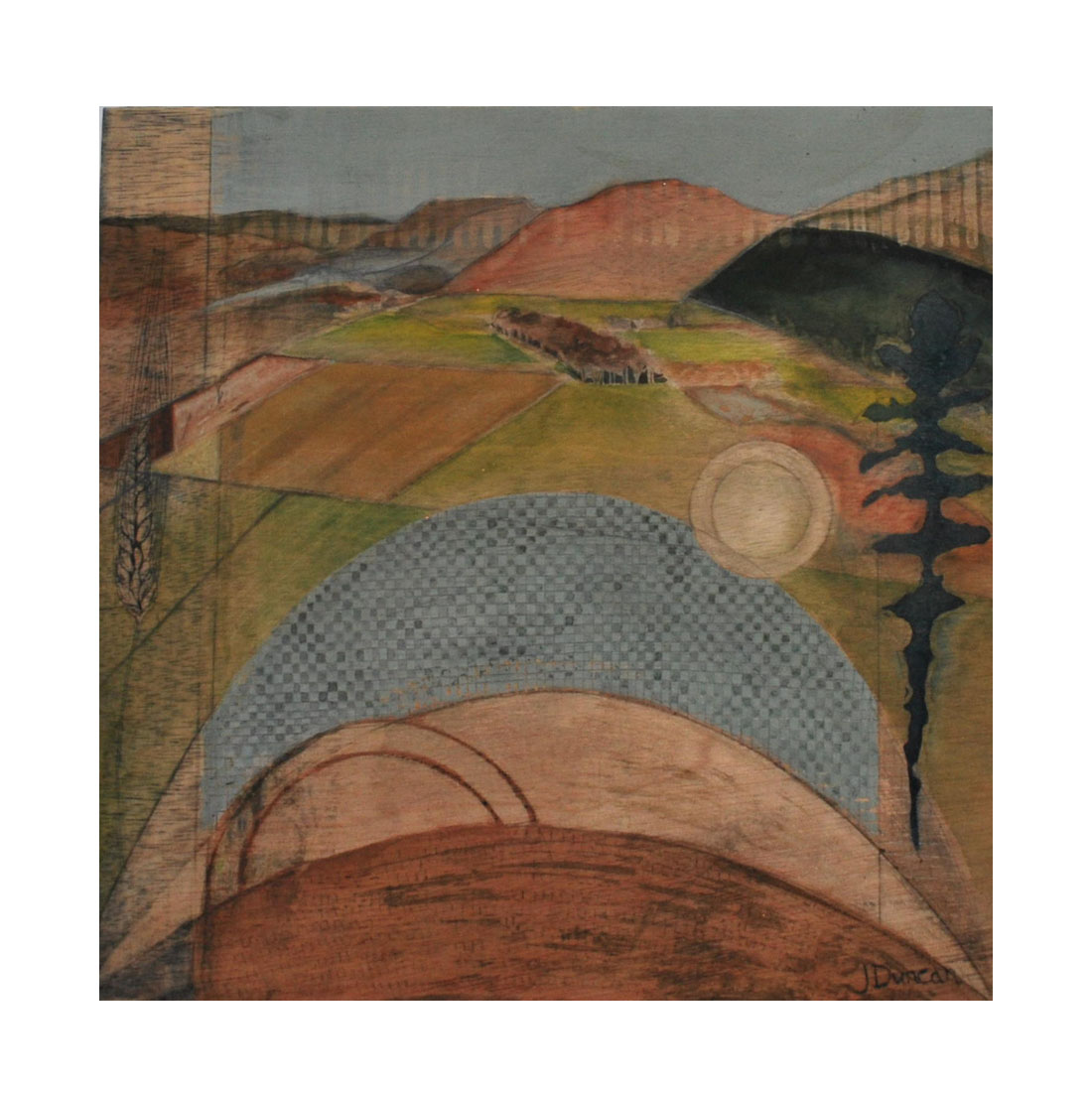 Jean’s painting, reproduced above – Kilmartin – inspired by the neolithic Kilmartin Glen in Argyll – takes in themes of early settlement, crescents, circles, crops and sacred landscapes. Capsella appears as a leaf to the right. 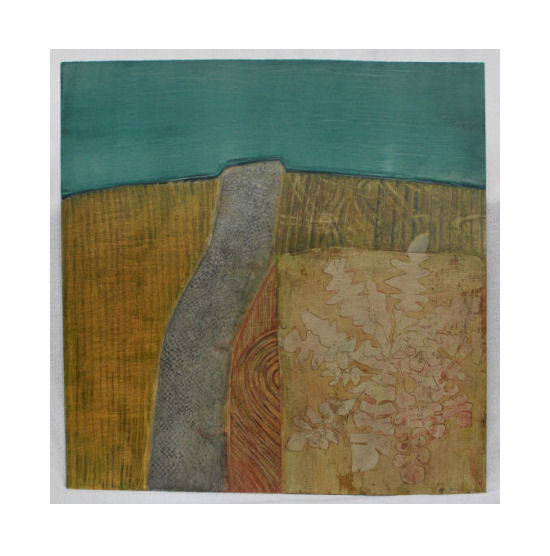 And above, a whorl of Capsella leaves in the panel lower right, lies above plough lines or rigs, regular to the left of the ‘wall’ but obscured by field marks to the right. Layers on layers.

Above – the ‘equinox’ series, depicting left to right, the erosion of the seasons in the progression of agriculture (2015) 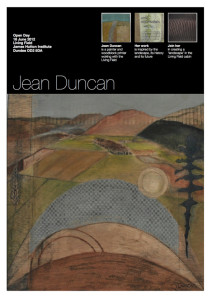 Jean is working as CECHR Artist in Residence (CECHR is the Centre for Environmental Change and Human Resilience, University of Dundee) exploring themes in biology and landscape.

The Living Field is pleased to continue working with Jean in 2017.

The poster (right) was prepared for Jean’s exhibits at the Open Day in 2012.