Here are some notes and images from previous years, beginning with 2015 (at the bottom).

Autumn and the equinox came with many plants still in flower and some of the longer lasting vegetables still productive. Red rose hips  in the hedges and red stems of the agrimony in the medicinals bed.

The cotton thistle had grown to about 8 feet in height and was maturing its seed heads, but the structure remained hard and the spines like needles.

Of the vegetables grown this year, the kale and brussels sprouts were still in good condition, the sprouts just ready for picking. Dyer’s greenweed Genista tinctoria was flowering profusely – it seems to have little in the way of annual rhythm here.

The vegetables, meadow, cereals and medicinals were splendid in June and July. Some photographs from early June can be seen at The Garden at Open Farm Sunday 2017.

Earlier, the dry spring ended with a deluge of rain, followed by sun and warmth in late May. The meadow has started to flower and some of the planted cereals, particularly the bere barley and rye, are well ‘in ear’.

Comfrey and viper’s bugloss (images above) are offering attractions to the many bumble bees visiting the garden.  About 20 bees were seen feeding on just two or three large plants in the late afternoon. 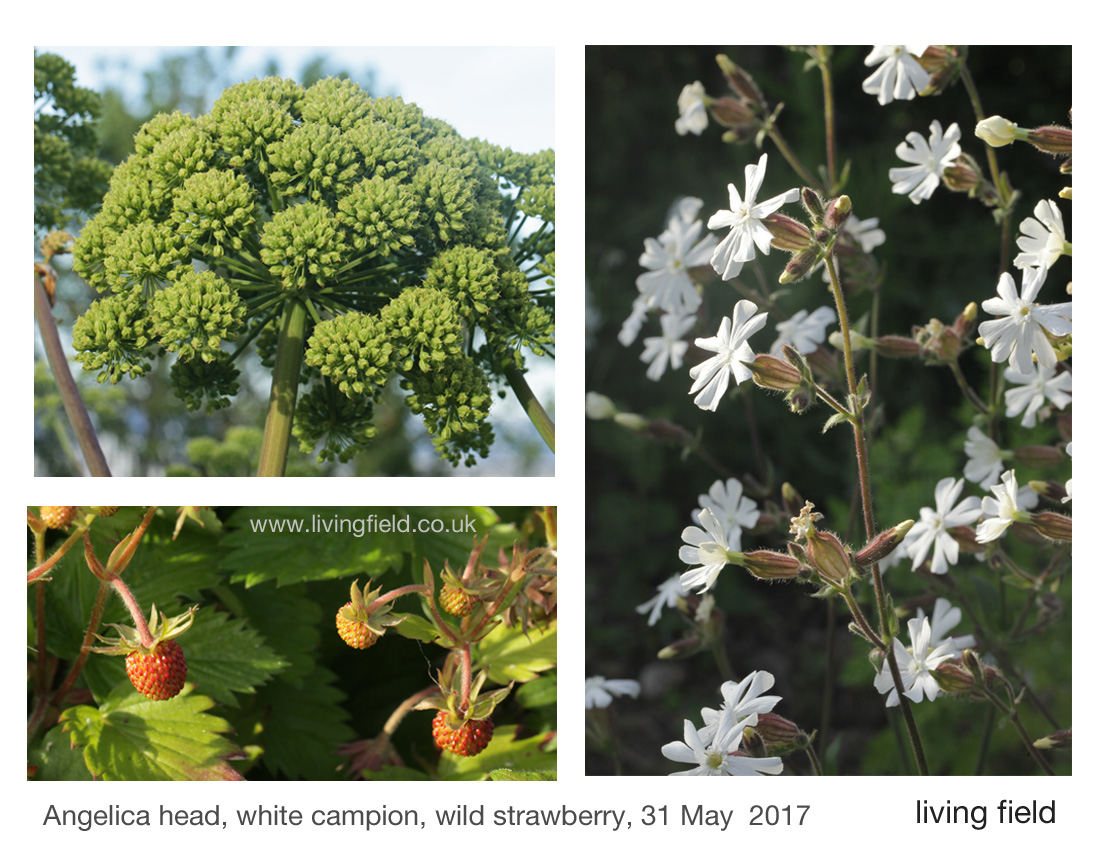 Perennial medicinals and herbs are mostly well advanced, some of the habitually early ones like angelica are well into seeding (images above).

Several seedbank annuals have emerged between the established perennials – large-flowered hemp-nettle, opium poppy and corncockle – but they will need some care to prevent them being out-competed. 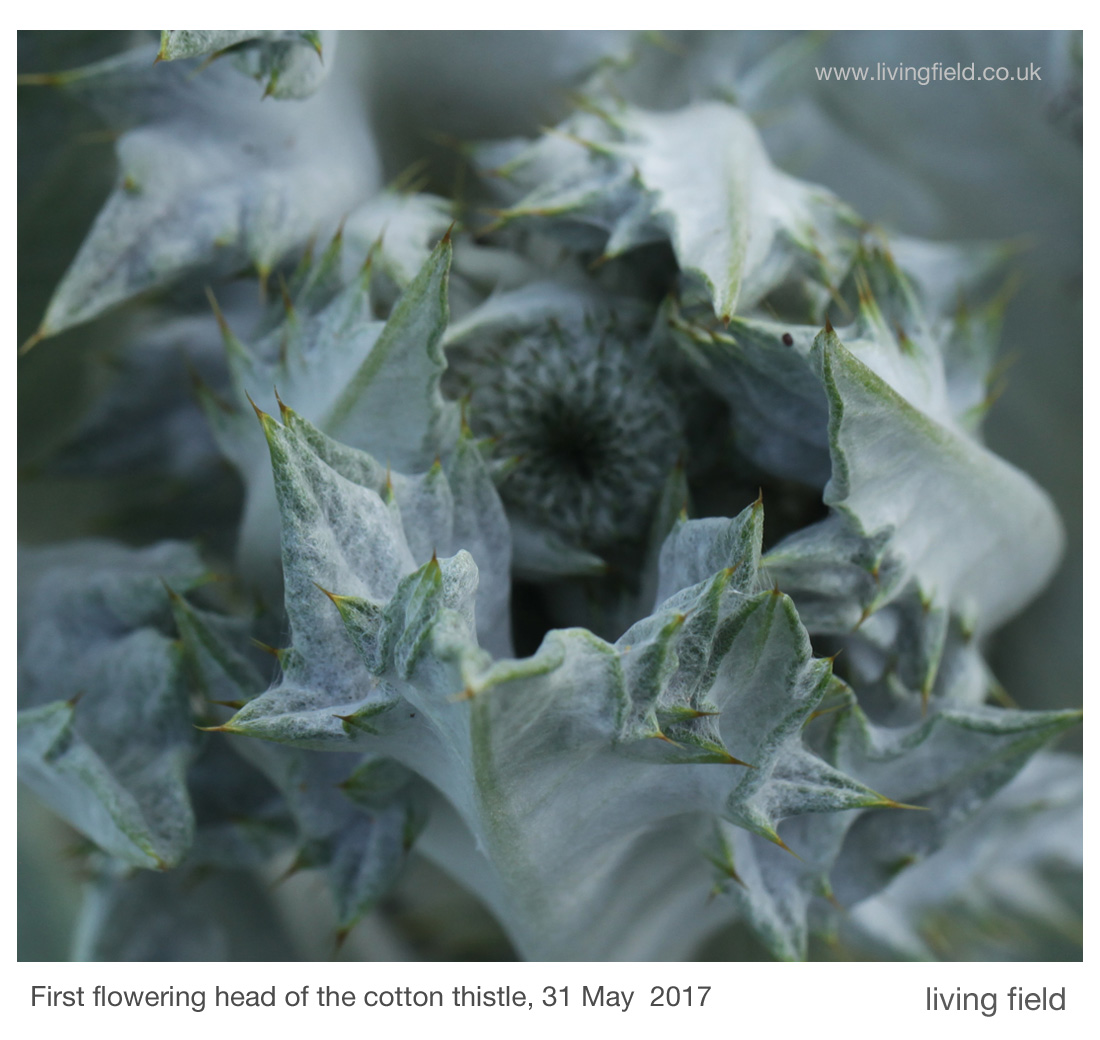 We are pleased to have a large, healthy cotton thistle again, one of the descendants of an original that arrived in 2004. This one emerged by itself last year, survived the winter and is now about to put out its first flowering head through a ring of spiny protective leaves (image above).

A new development for 2017 is a display in the west garden (through the gate) of vegetables and herbs to demonstrate the ability of plants to accumulate mineral elements and make vitamins and other compounds that are good for human health.  A new web page will open on this site describing the plants and their properties (images below). 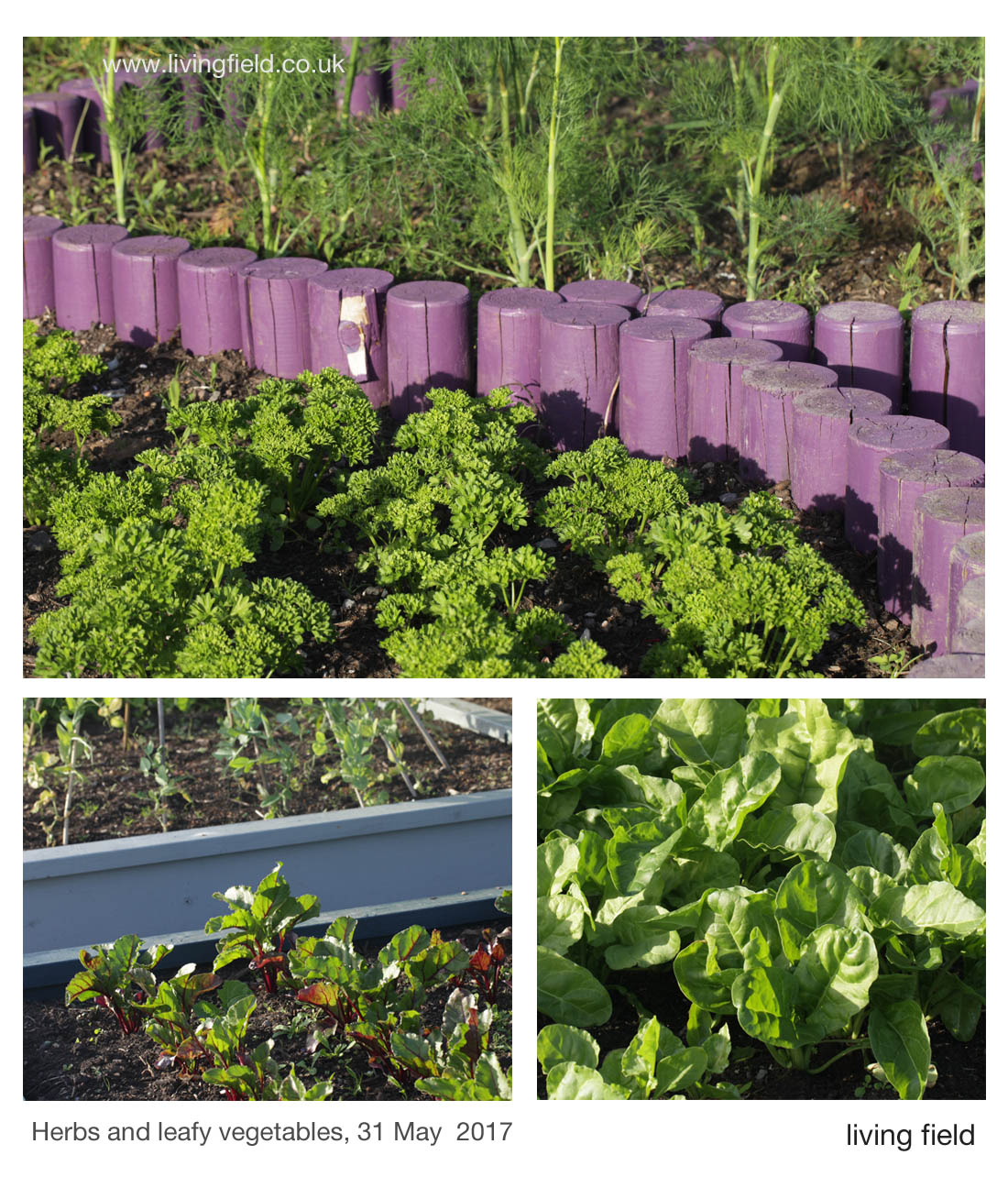 A very dry spring so far, and some cool periods. The meadow plants are slow to extend, except for some flowering heads of timothy grass  (top left),  packed with anthers that flutter in the wind. By Beltane,  early May, the marsh marigold is flowering and the comfrey just in bud (each bud about 2mm wide, top right below). 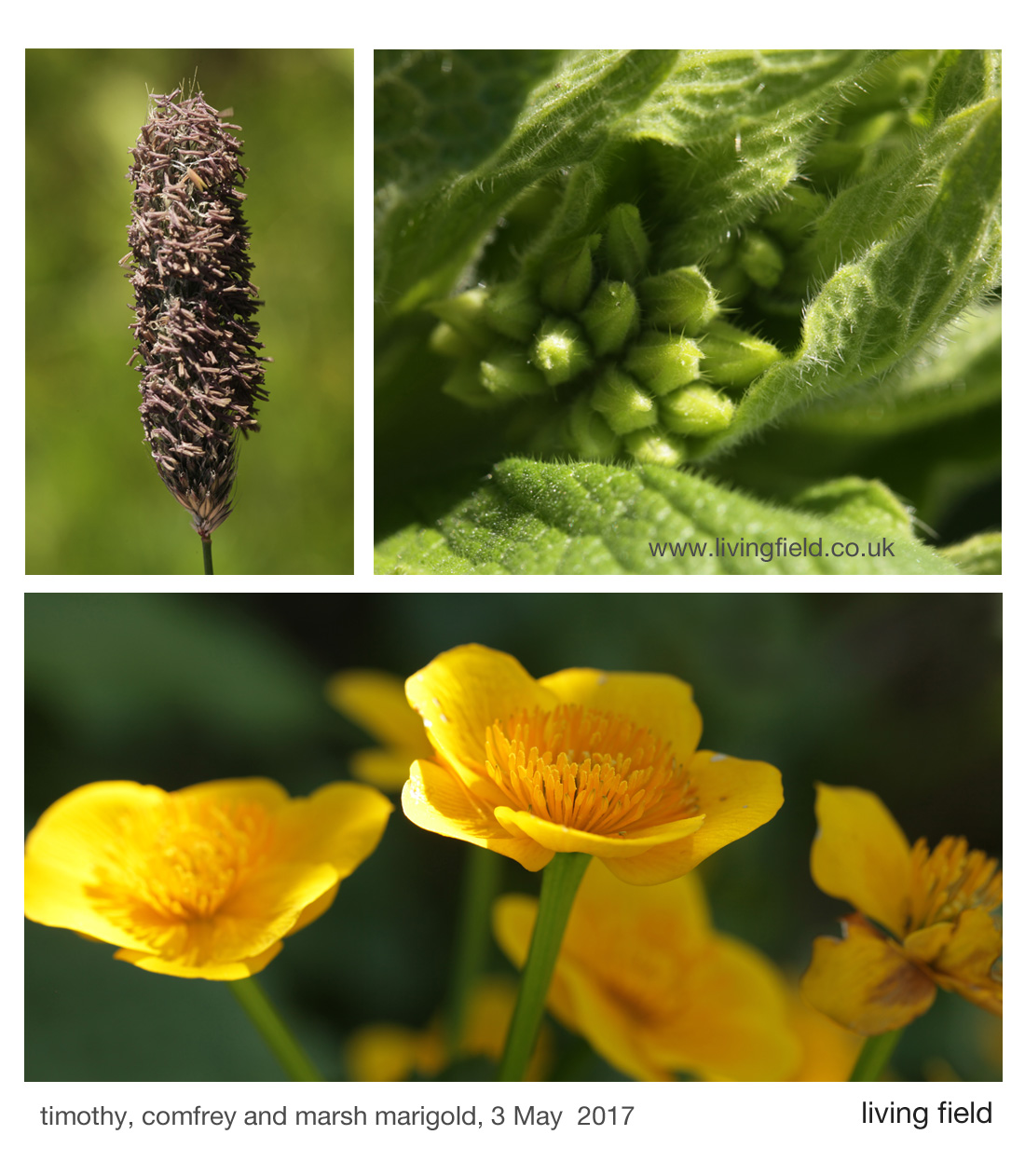 Paul has tilled the arable (cropped) patch ready for Gladys, Jackie and Paula to plant the ancient cereals, which are now in.

This year we are planting a wide range of vegetables. It’s good to see them bright and fresh in their rows. The pigeons think so too.  There is a row of brassicas one evening and the next morning they are gone. (And gone again the next morning after replanting.) So we had to resort to covering the plants with hoops and fleece. Let’s hope it works. (Bet the slugs are happy the birds are kept out.)

Geoff has been working on the medicinals and dyes beds but the ground is like rock with the dryness. The spade does not get deeper than six inches into the soil. Not much can be done in the way of moving plants without a good soaking from the sprinklers. (But by 16 May it rained a couple of times!)

Some of the small trees have begun their annual cycle. Late March and early April – willow is moving through its flowering phases: each floral ‘branch’ starts compact, black bracts shielding red anthers (male, pollen); then anthers enlarge, still red at first (top, right below), turn yellow briefly, and then shrivel to black, their stalks white, extended (top left below). 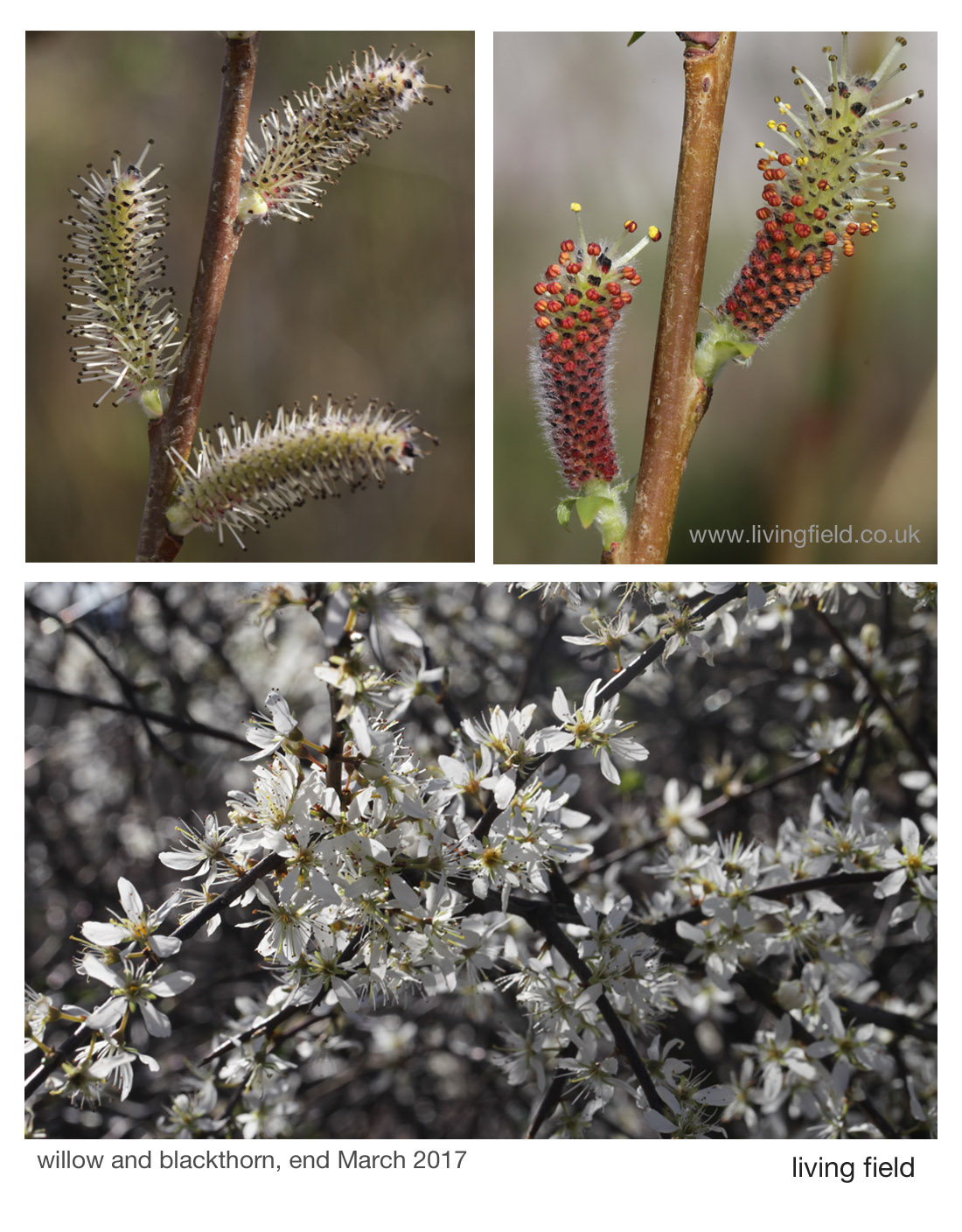 From late March also, blackthorn in the hedge is in full flower (lower above), white against the black stems, no sign of leaf yet. A few bees were looking for food, mostly on the willow.

A month earlier and a spell of clear days and nights gave some coloured skies just before sunset. Here is the one on 27 February 2017, fleeting yellows, reds and blues as the sun went down on a cold, clear wintry day, silhouetting the sculpted dragonfly and native trees in the Living Field garden. 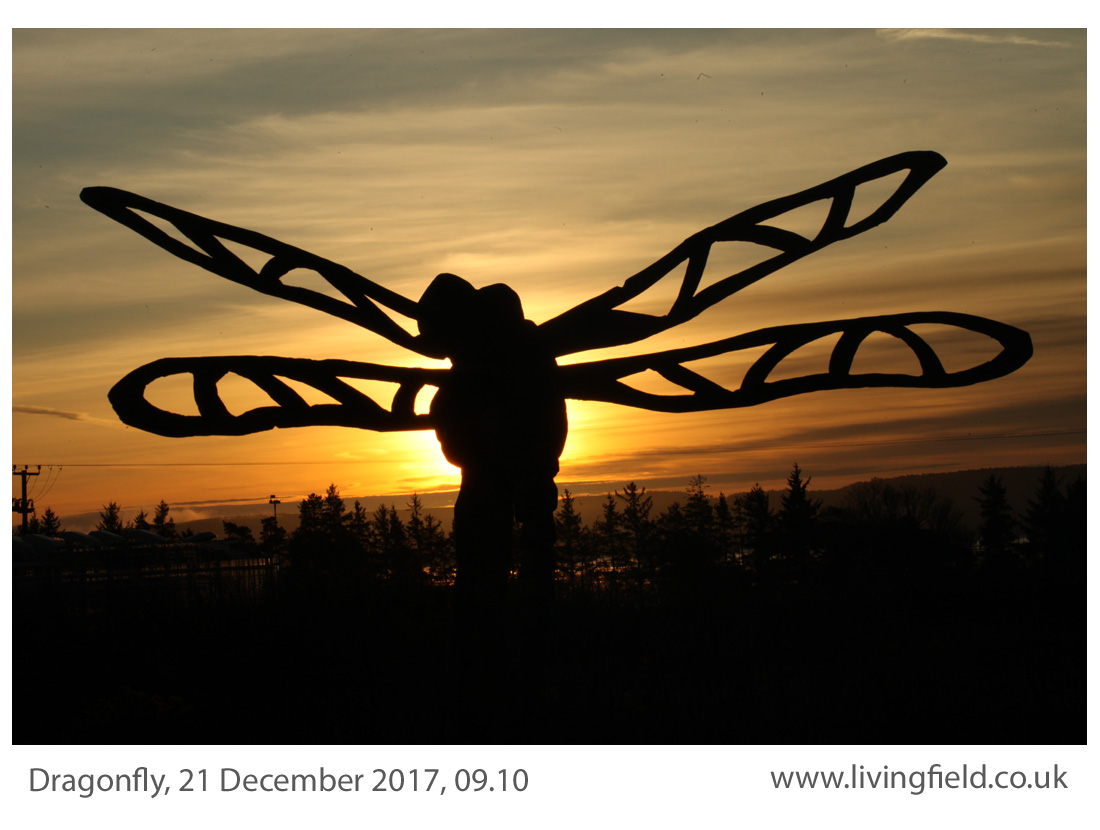 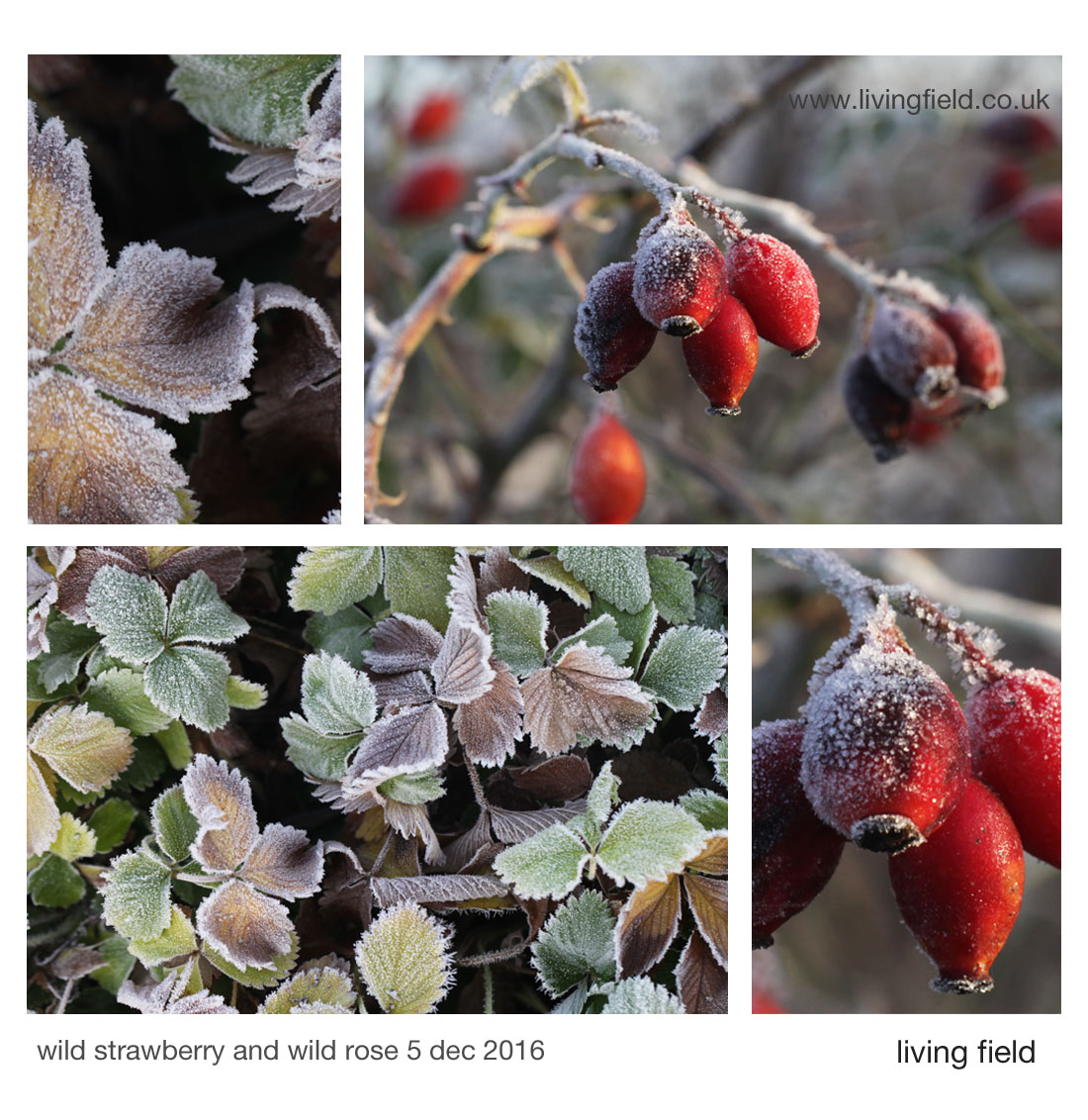 A cold frosty day in December. Shape and colour accentuated by slanting light. Two of the rose family above: wild strawberry (Fragaria vesca) keeps its leaves most of the winter; a Rosa species in the hedge displays its hips.

Below are three of the cropland’s small trees: field maple in a hedge (top), hazel (bottom right) and blackthorn sloes, still round, yet to shrivel. 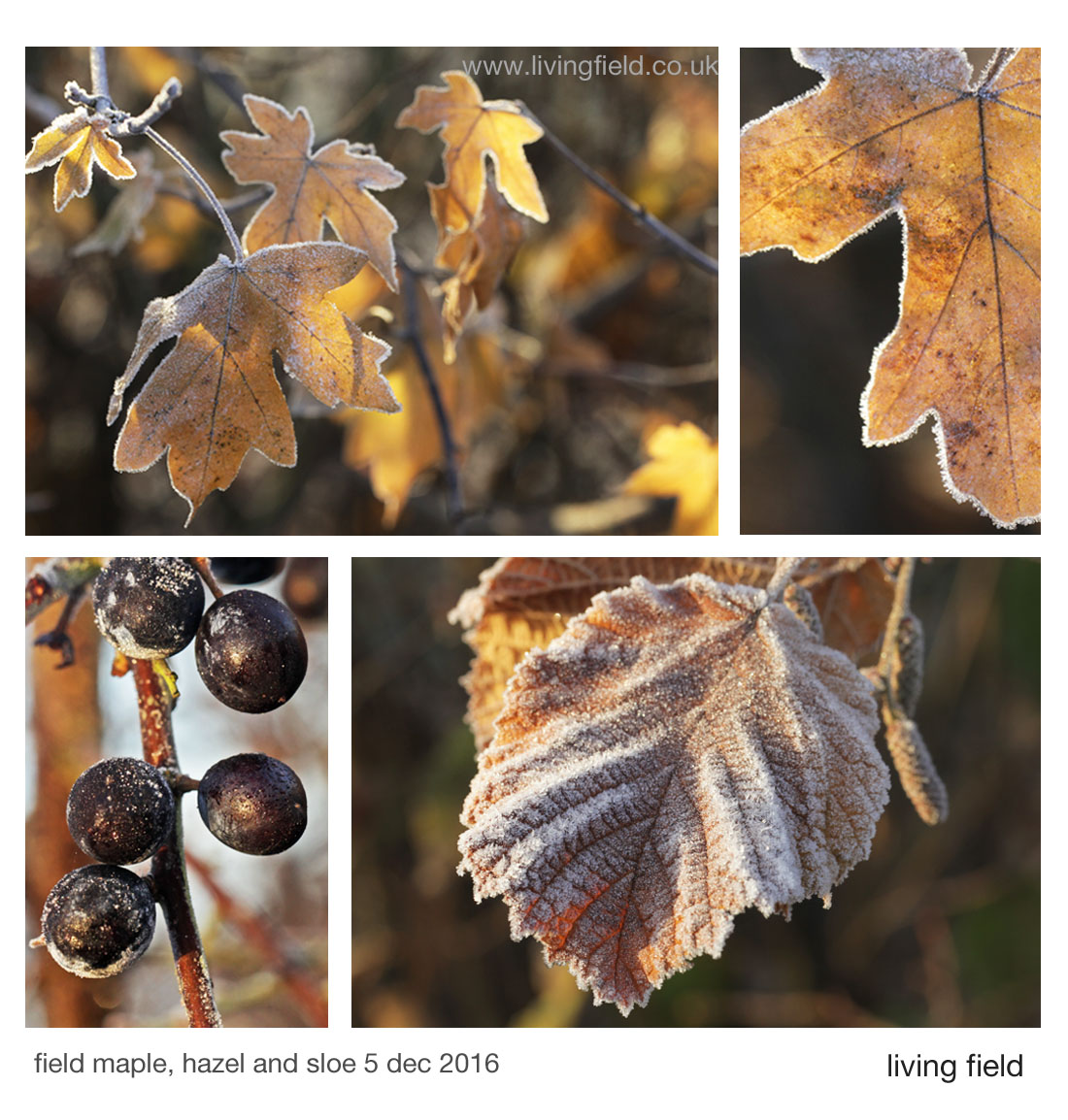 September 2016  The ‘root’ brassicas, mainly swede this year, and beet, are still bulking and not much affected by pests. The peas next to them have been uprooted, leaving the nitrogen-rich roots and nodules in the ground for the next crop. Next to them are a few pumpkins and ornamental maize. 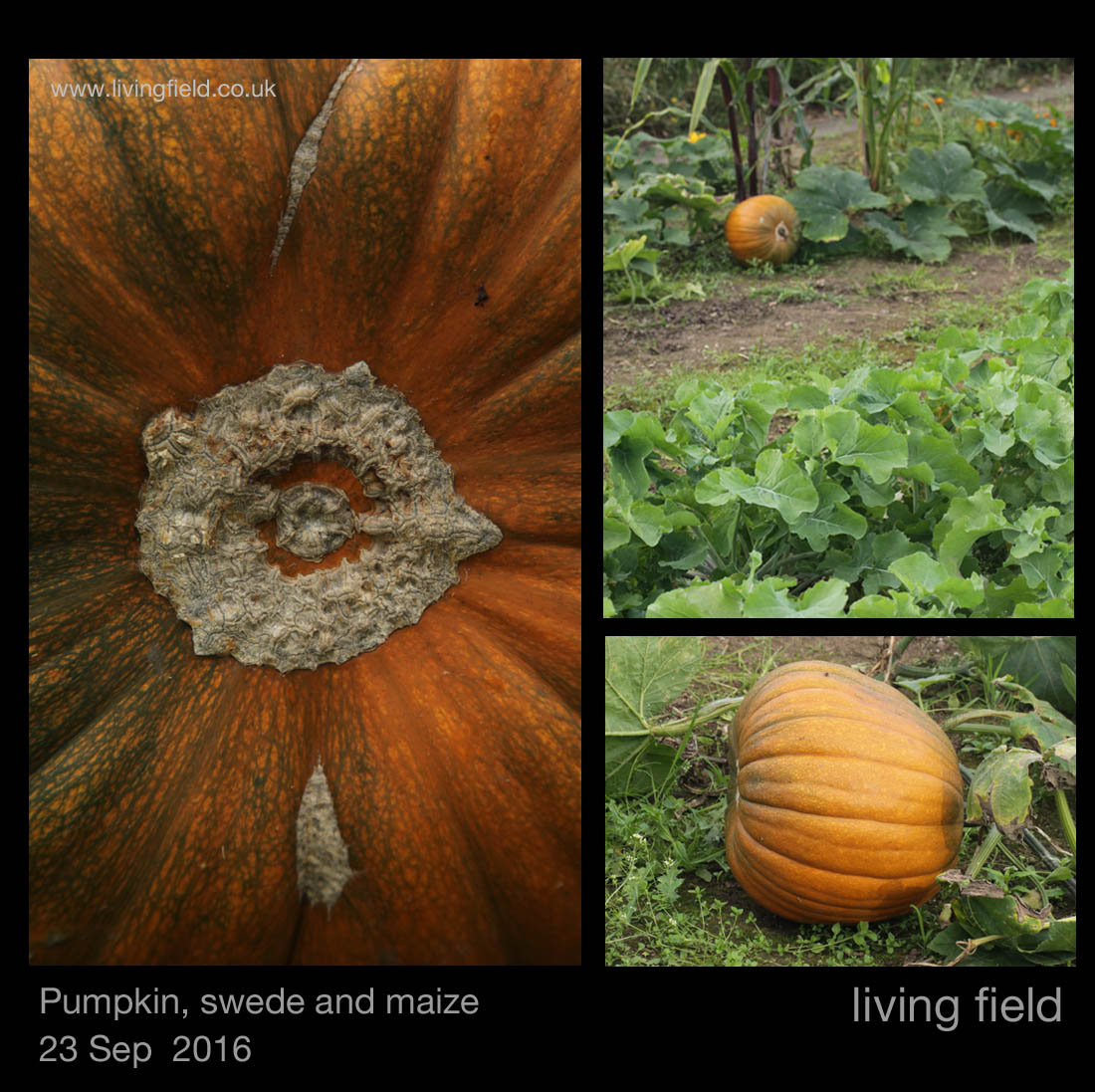 Most of the flowering plants are well into seeding – just the occasional scabious and bugloss left for the bumble bees. Images below show a range of seeding heads – a dense whorl of wild basil (Lamiaceae), just released pappus-born seeds of hemp-agrimony (Compositae) and the enclosed, russet capsules of St John’s-wort (Clusiaceae). 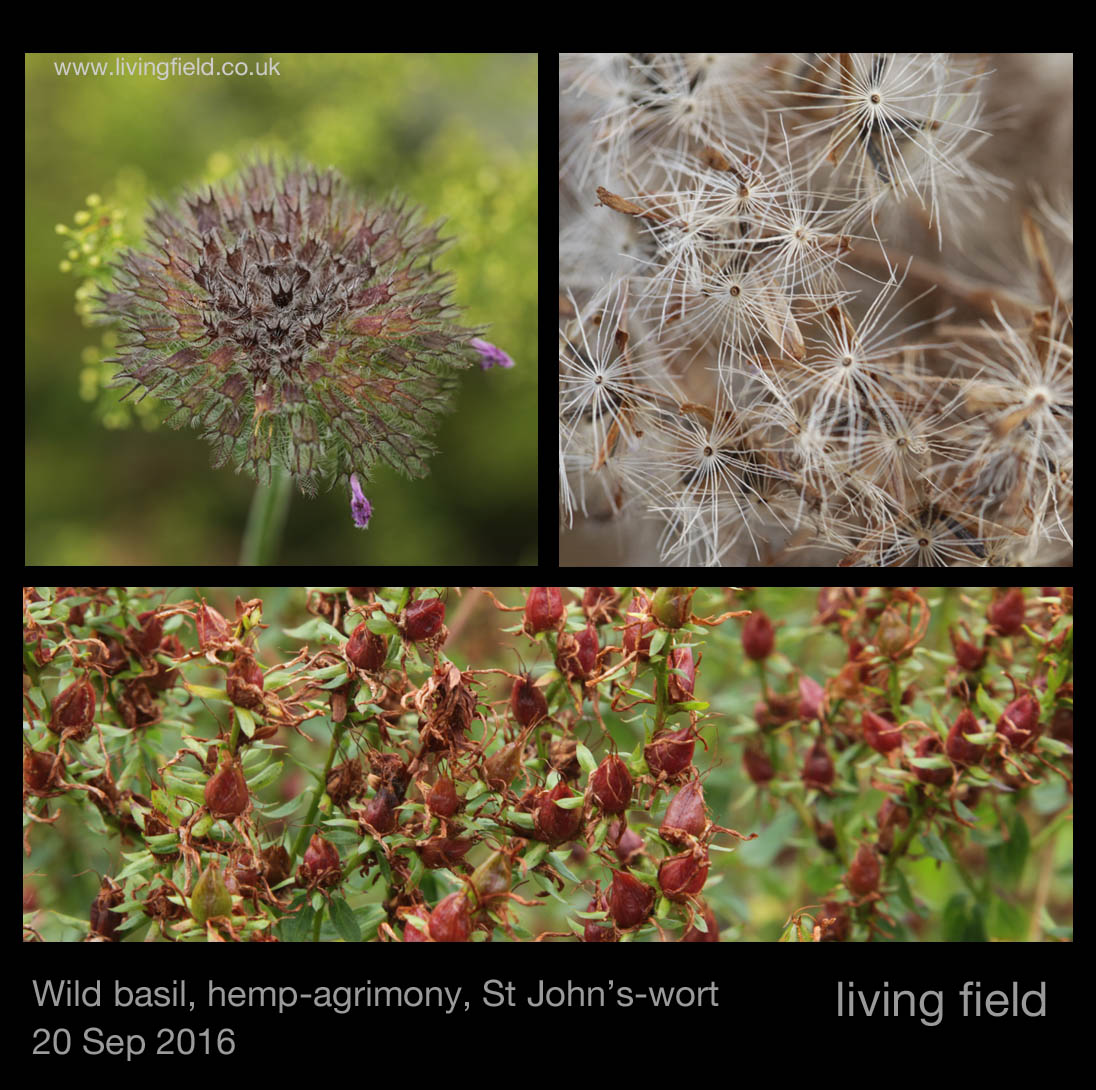 July 2016 The medicinals and herbs bed has become a mass of varied shape and colour. The sequence of flowering plants continues in late July with the Labiates betony Stachys officinalis, a perennial, and large-flowered hemp-nettle Galeopsis speciosa, a self seeding annual. 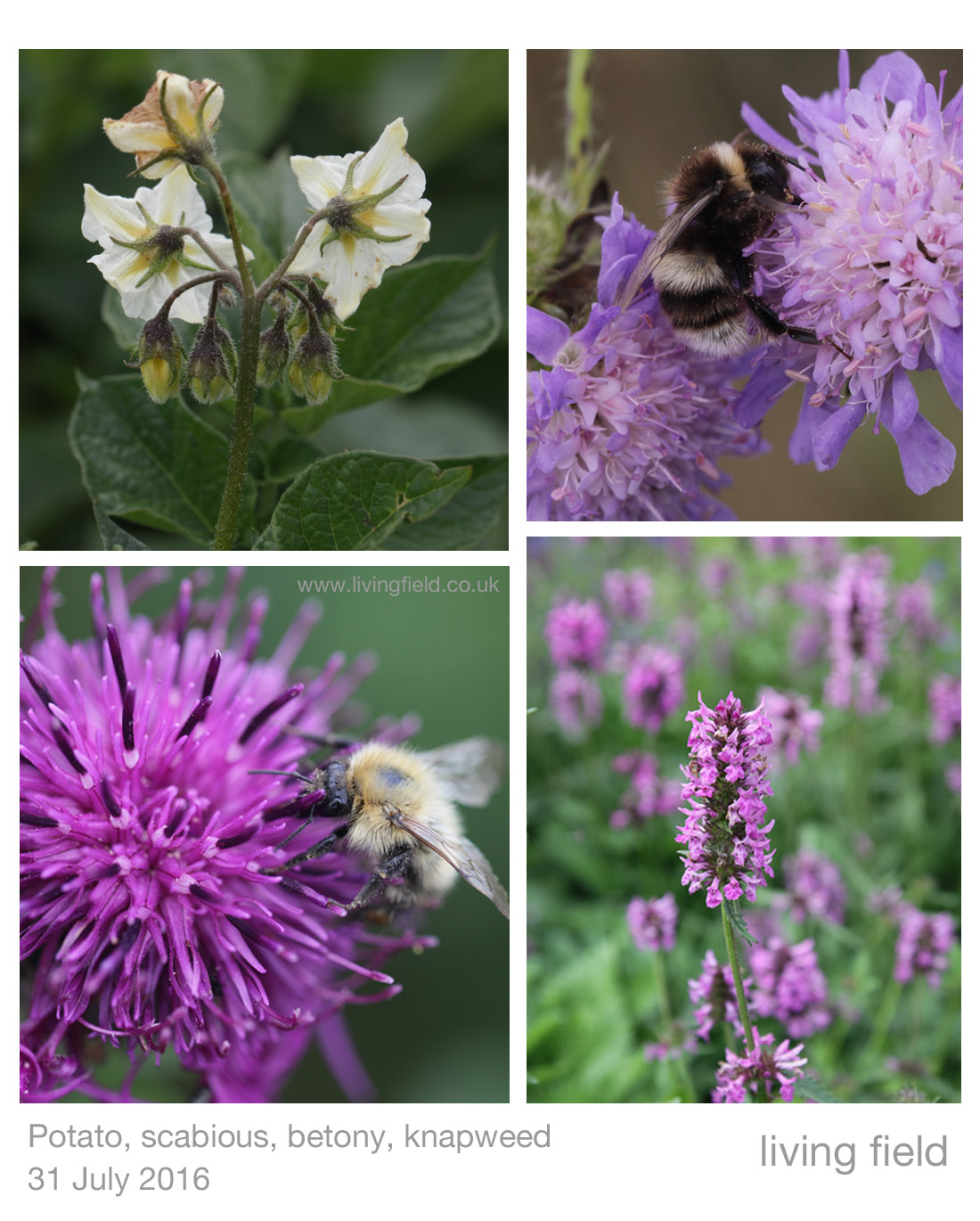 New in 2016 is the common blue-sowthistle Cicerbita macrophylla, flowering from early July (images below), now far from common in the croplands, flowers similar to but paler than the chicory which is still to bloom. Half a dozen plants were moved here earlier in the year from a roadside location where they had recovered from spraying in a previous year. 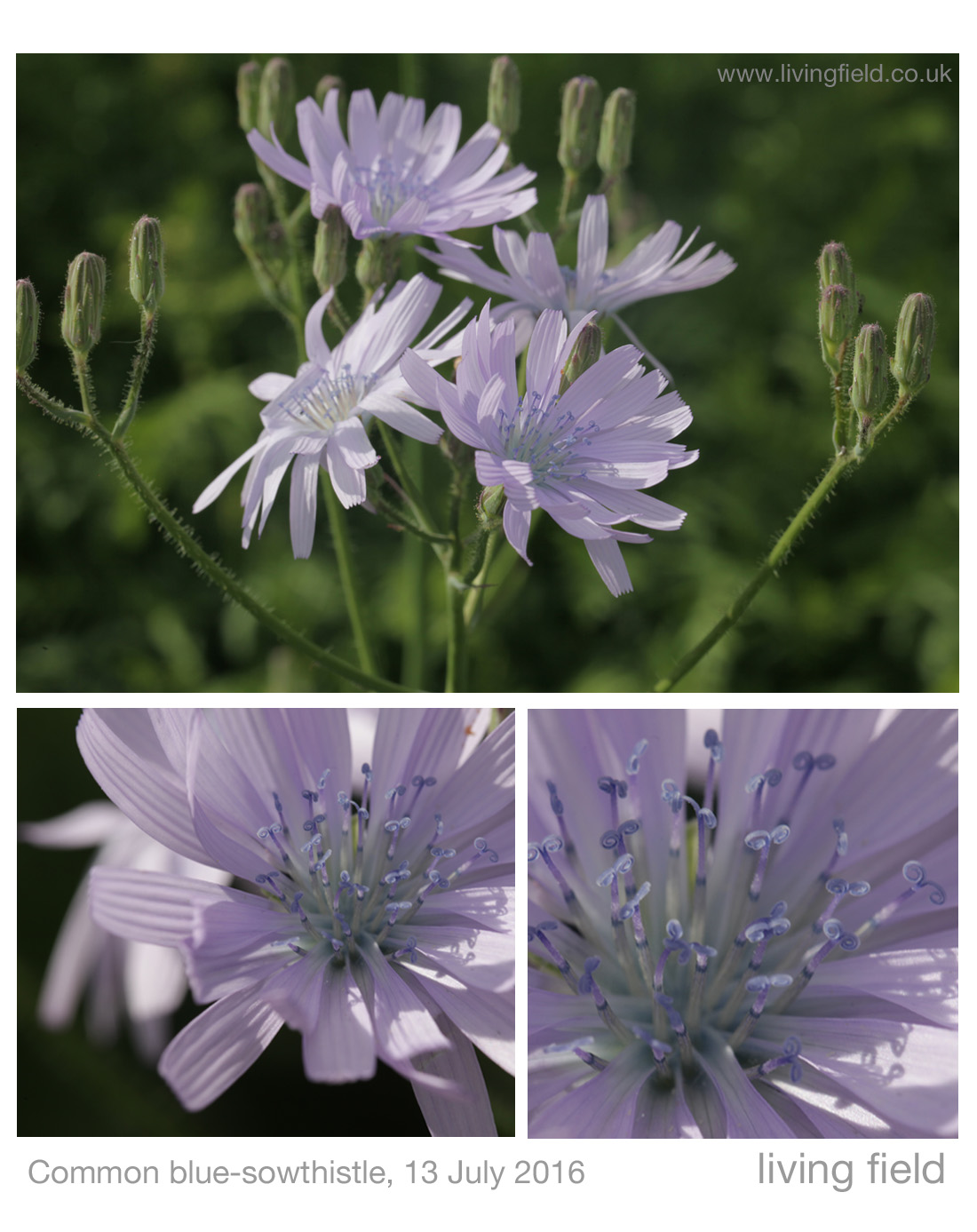 In addition to potato and vegetables, the arable plot was broadcast with bere barley, which is now well into flowering together with its customary weeds such as fat-hen Chenopodium album, corn spurry Spergula avensis and henbit dead-nettle Lamium amplexicaule. Elsewhere, there is some serious weeding to do – ragwort, creeping thistle and fireweed (Epilobium). 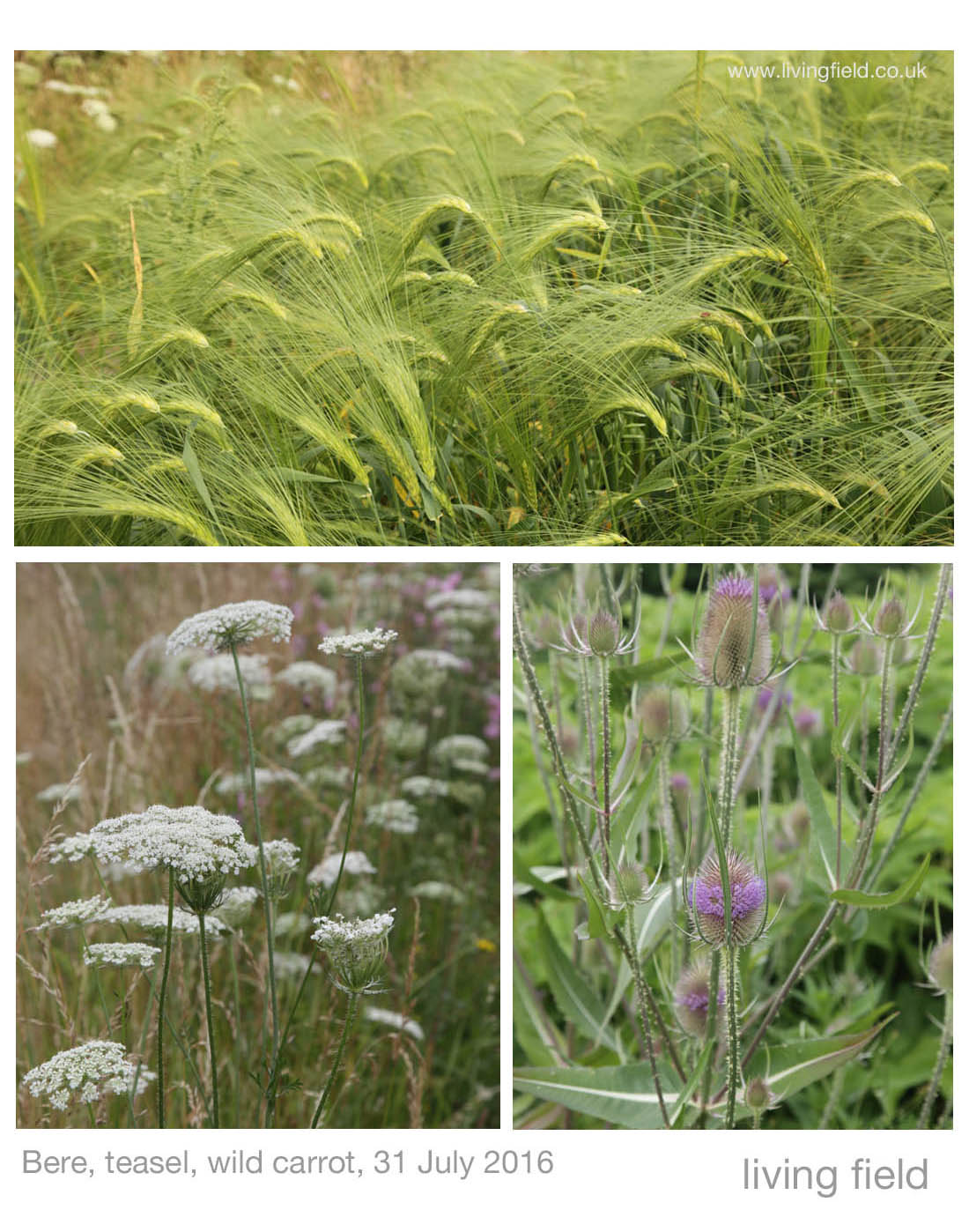 Mid-May 2016 The sun is moving slowly towards its high point for the year, yet many of the plants were held back by the cool of April and the recent clear days causing high evaporation of water. Rain changed that in the past week and there’s an explosion of leaf and stem. The angelica and lovage should reach more than six feet in height. 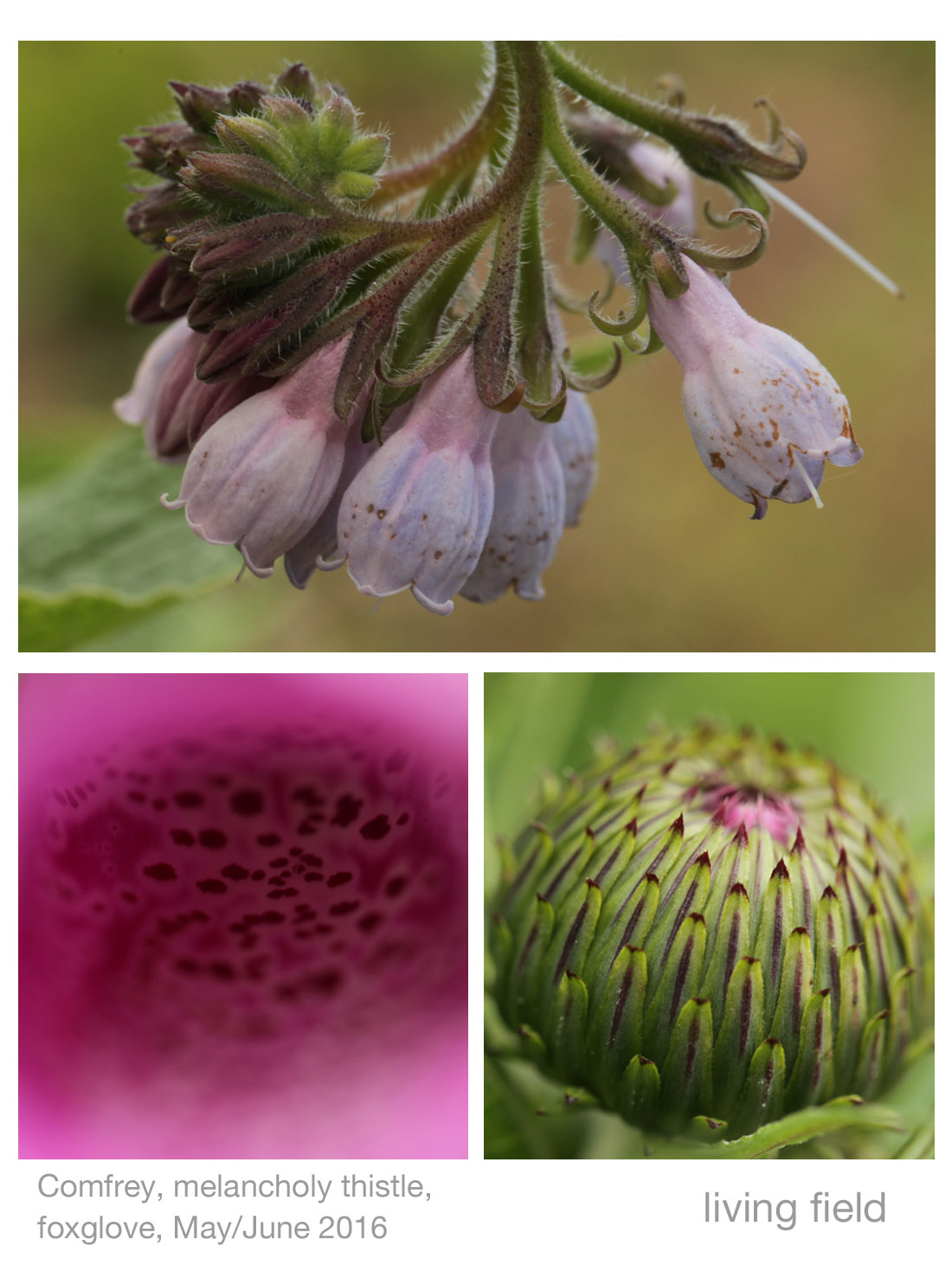 Each year, the medicinals bed is left until we can see which plants have survived and reseeded: there is much to sort and move but the weeds take advantage. Gladys and Paul have tilled the crops section and will complete planting soon. 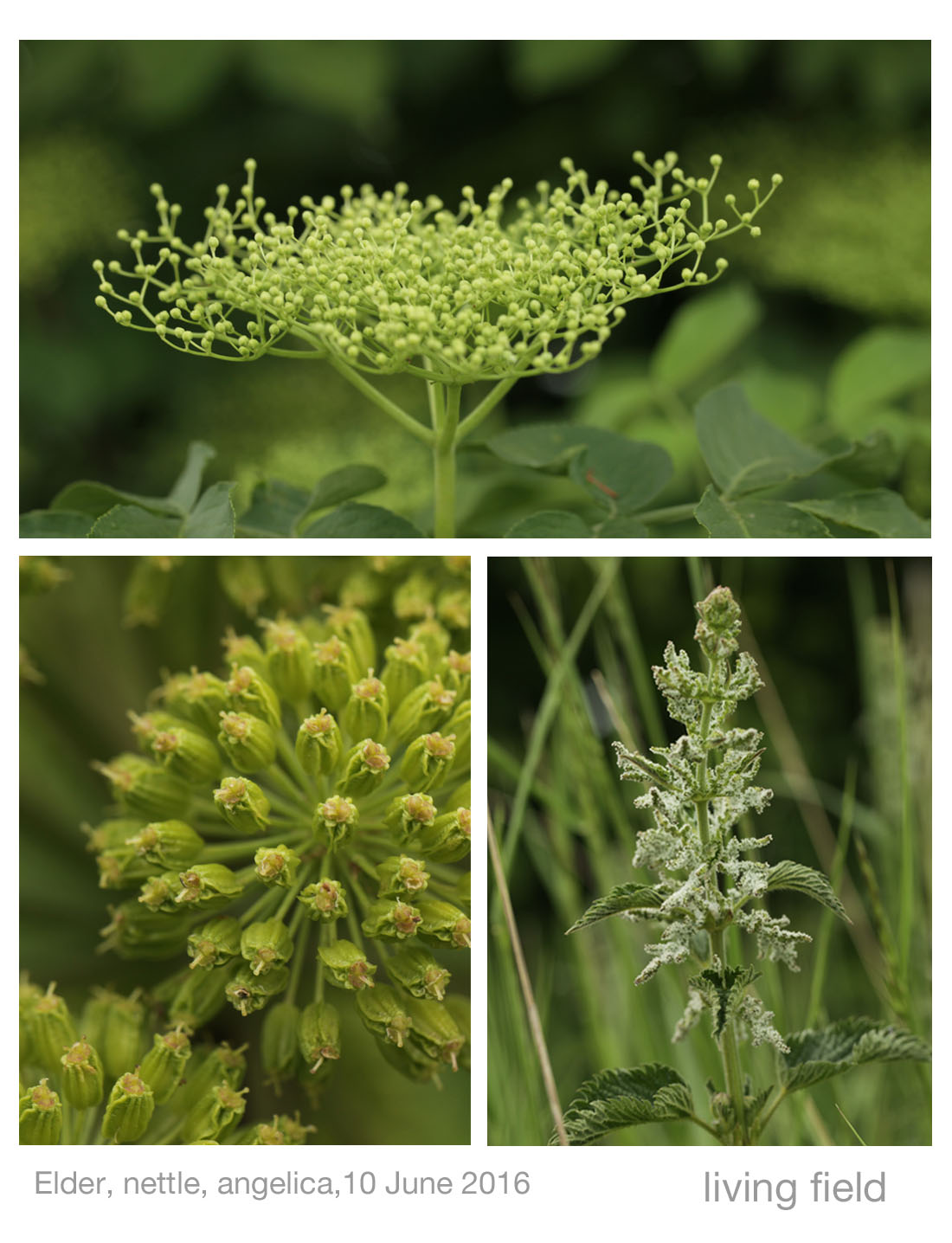 Back in early March, the garden was starting to de-saturate after the wet winter. Most plants were still biding their time, but there has been little frost this year and already the woad stems are beginning to elongate.  Perennials that keep their leaves, including the rosemary below, look fine, showing little cold damage. 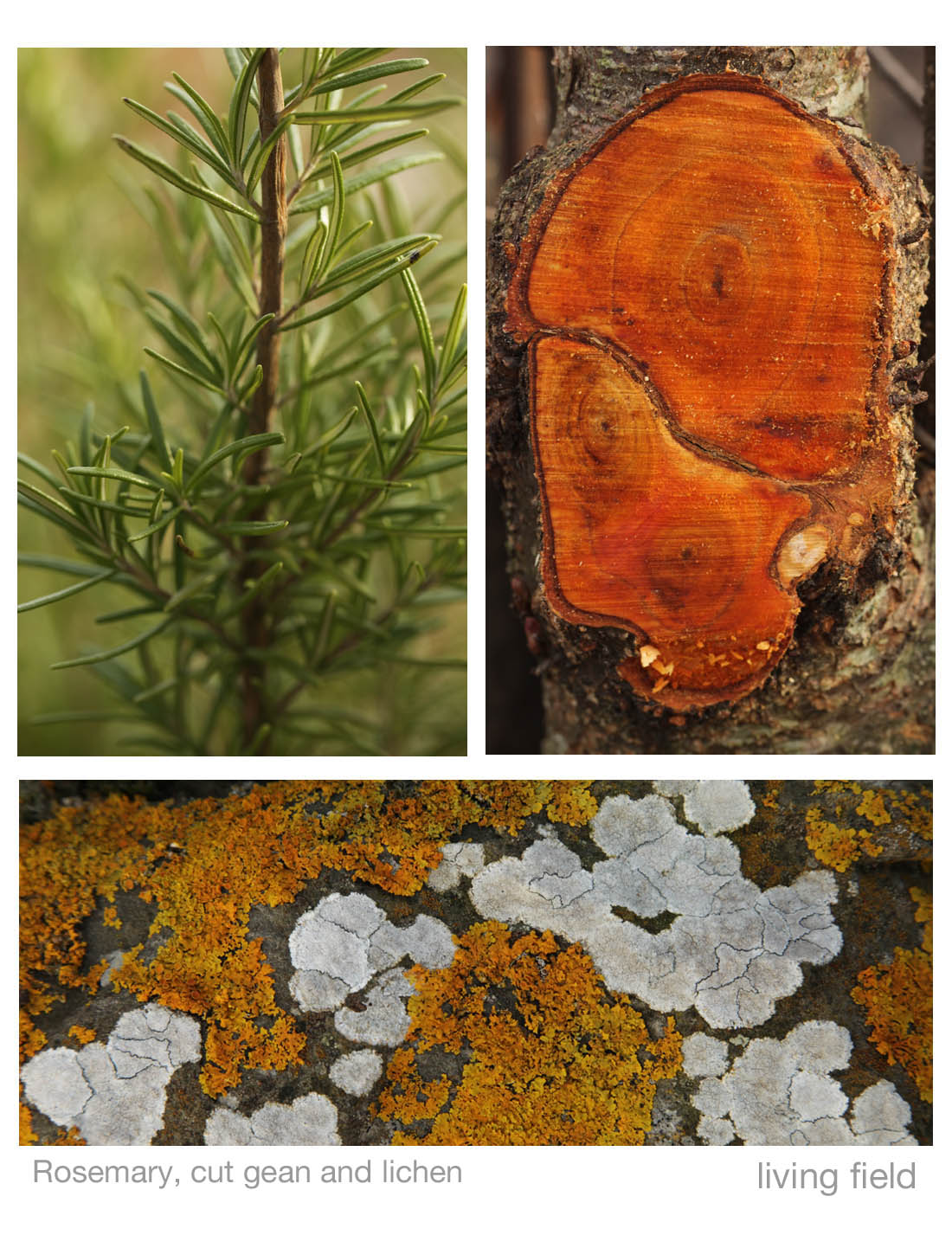 The hedge at the south end has been neatly cut, the branches of the gean (wild cherry) showing a deep orange-red.

Teasel heads have emerged intact after the winter and signs of renewed life appears in the hazel catkins and new shoots of the hedgerow plants, of which elder is among the first (images below). 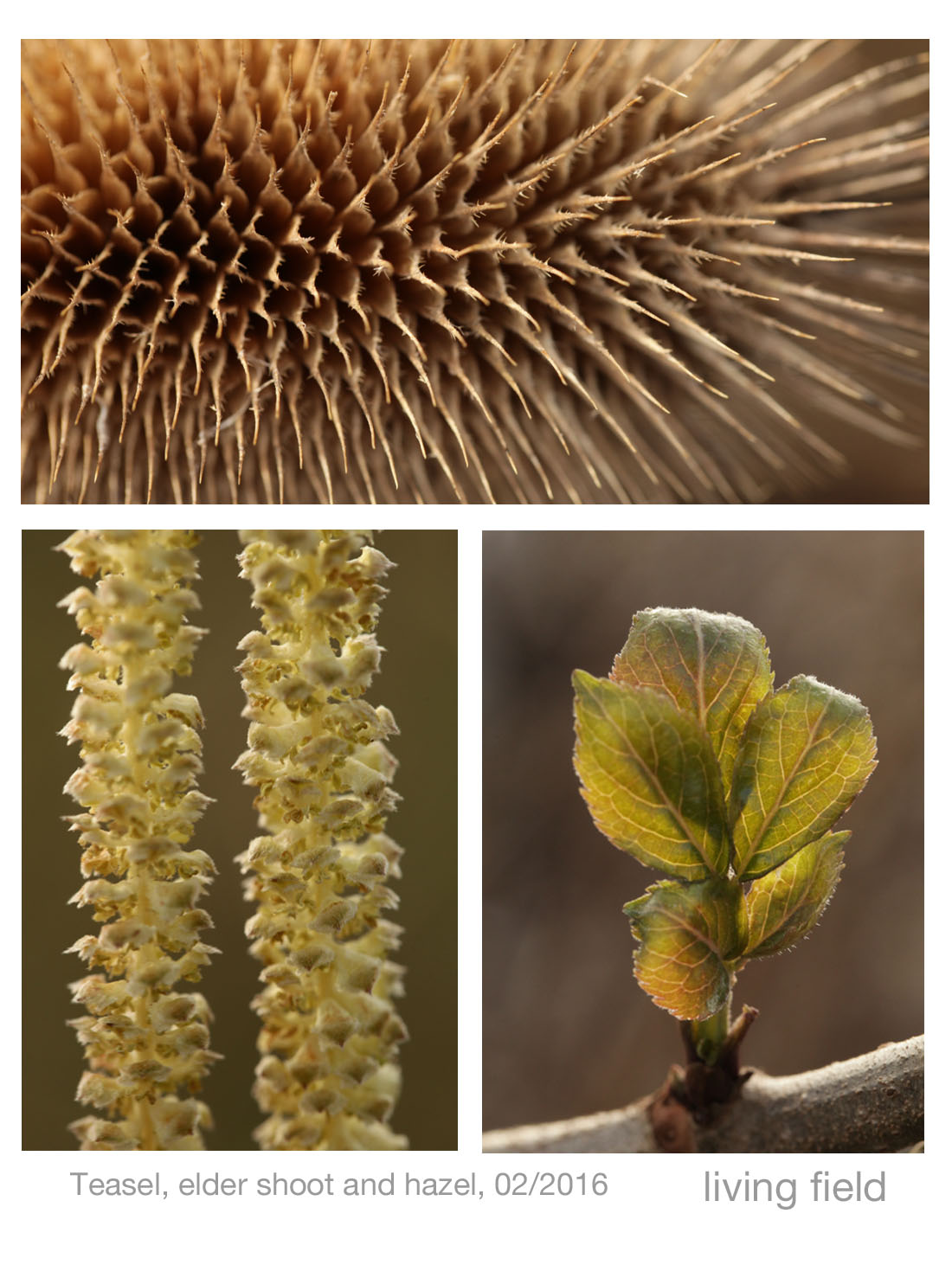 Early October 2015. The barley varieties and landraces, together with emmer, spelt, rye and black oat in the cereals collection and the two potato varieties have been harvested. Some swedes, parsnips, cabbages and leeks have also been taken up. Maize is still filling its cobs but may come to nothing (Fiberoptic 4) while one sorghum might just flower before the frost gets to it and the millet remains vegetative.

Most of the meadow has been cut. The equinox is ten days past and autumn is well under way. 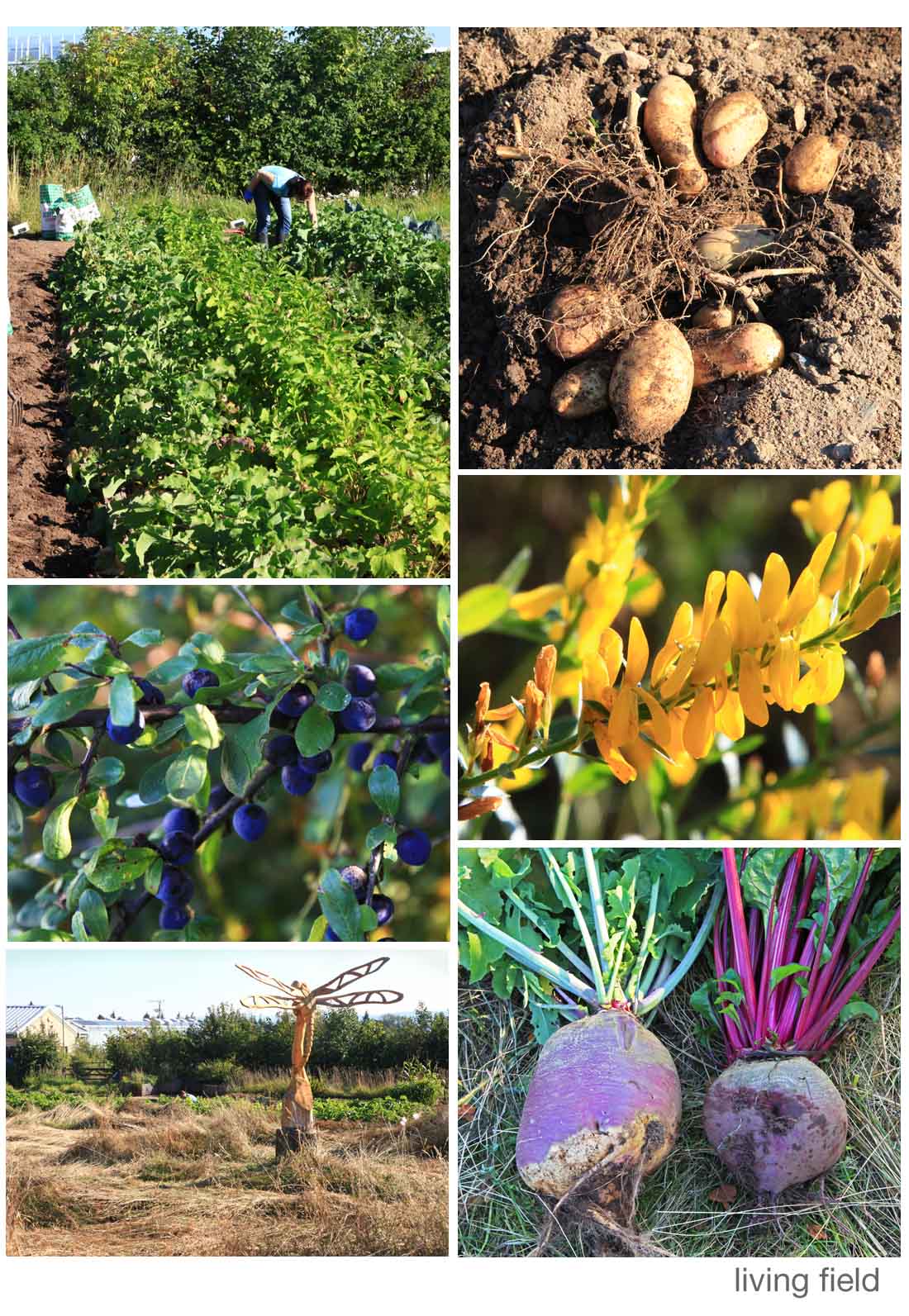 Images above show (top left, clockwise) rows of potato being harvested, the produce of a potato plant, bloom of dyer’s greenweed, swede and red beet just pulled, the meadow cut and sloes in the hedge.

And despite the wet, most of the plants were in full flower between late June and late September. Images below, taken 29 June 2015 (top left clockwise) across the medicinals bed, fox and cubs in the foreground, then feverfew and the blue spikes behind viper’s bugloss; fox and cubs in flower, foxglove, teasel head forming and foxglove flowers close up.