The very wet autumn of 2012; loss of yield; erosion of soil and plants; the mixed blessings of tramlines; light after the storm.

The high rainfall in autumn and early winter 2012 caused a loss of crop. It gave problems for harvest of late-maturing crops such as potato and winter wheat, and also for autumn-sown crops that had just been or were about to be sown.

So it not only reduced the harvest of autumn 2012, but altered the balance of crops and their yield in 2013.

The problems were caused not so much by the amount of rain but by its timing – across the period of harvesting and autumn sowing.

Some fields had standing water for weeks. The soil near the entrances to fields was slaked, churned and puddled by machinery. Erosion was obvious in the large patches of structureless soil lying at the bottom of fields and sludging out onto roads. 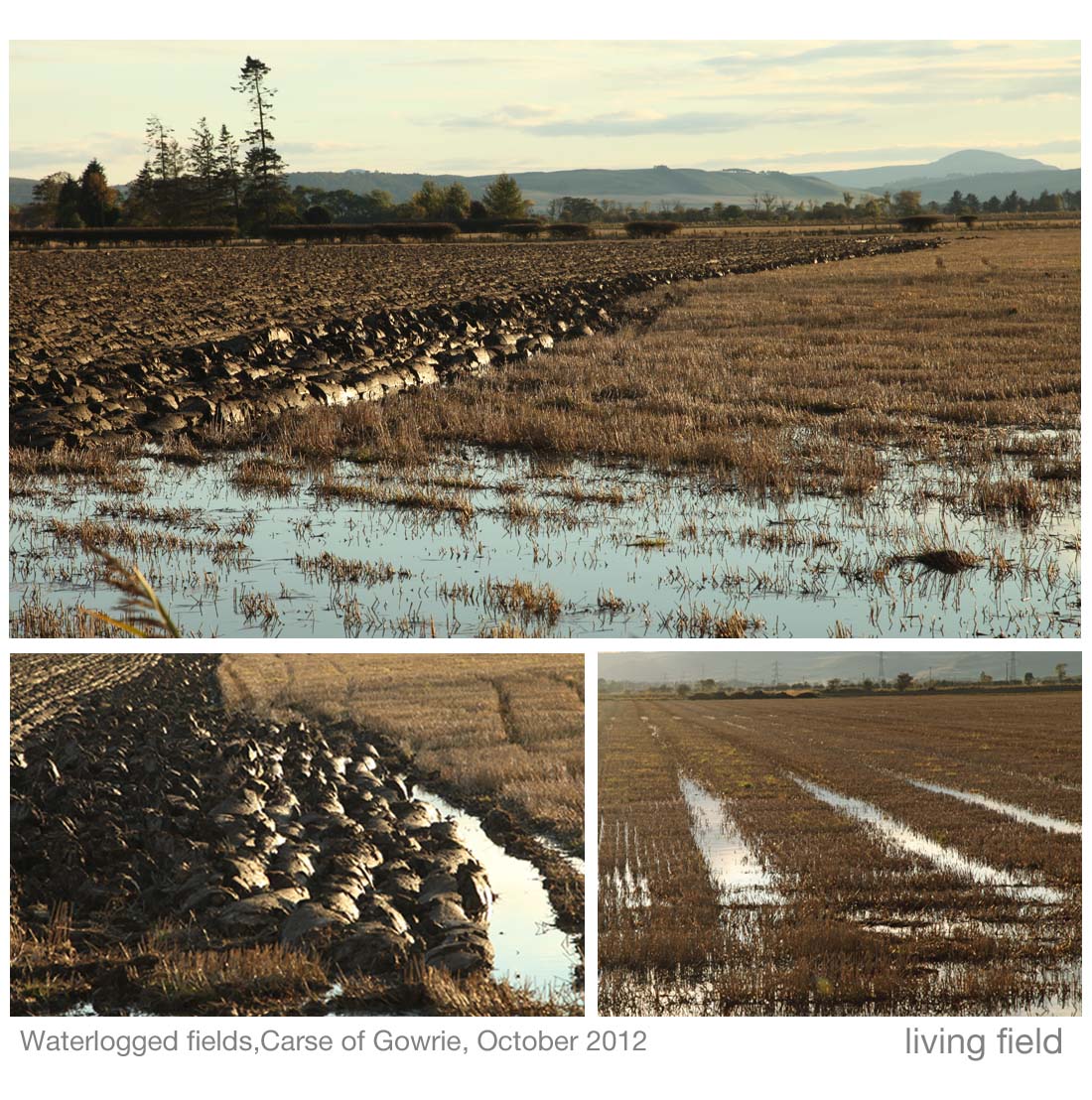 What was the damage?

The reduction of yield due to crops damaged, not matured, not harvested or incompletely harvested in 2012 was large by our standards. The high-input crops – potato, winter wheat and winter oilseed rape – lost up to 30% of their yield. (The national yield that year was about 70-80% of the 10-year average.)

A loss of 20-30% might not seem too big compared to what farmers experience in some part of the world, where most of the crop can be lost to drought or pests. Yet a loss of this size is unusual in our maritime croplands – a signal perhaps of underlying problems in soil cohesion and stability.

What made things worse in 2012 was that the crops had been tended and fertilised earlier in the season. So the cost of growing them was incurred but the rewards were not as great as expected.

Graphs showing the drop in yield in 2012 compared to yield over the period 2000-2014 can be found on this site at Winter Flood continued.

Some fields growing potato were badly affected. The images below show a potato field a couple of weeks after it had been treated with herbicide to kill the foliage for ease of harvesting. (This is a usual practice.) The dead potato foliage – the haulm – can be seen in the upper and lower right images.

In some places, the flooding was so heavy before harvest that potato tubers were washed away from the plant and deposited down the field.  Not only tubers – the plants in some fields had flowered and the resulting seed ‘berries’ were also washed away. Tubers and berries were floating around together in large puddles, then became half buried in soil deposits. 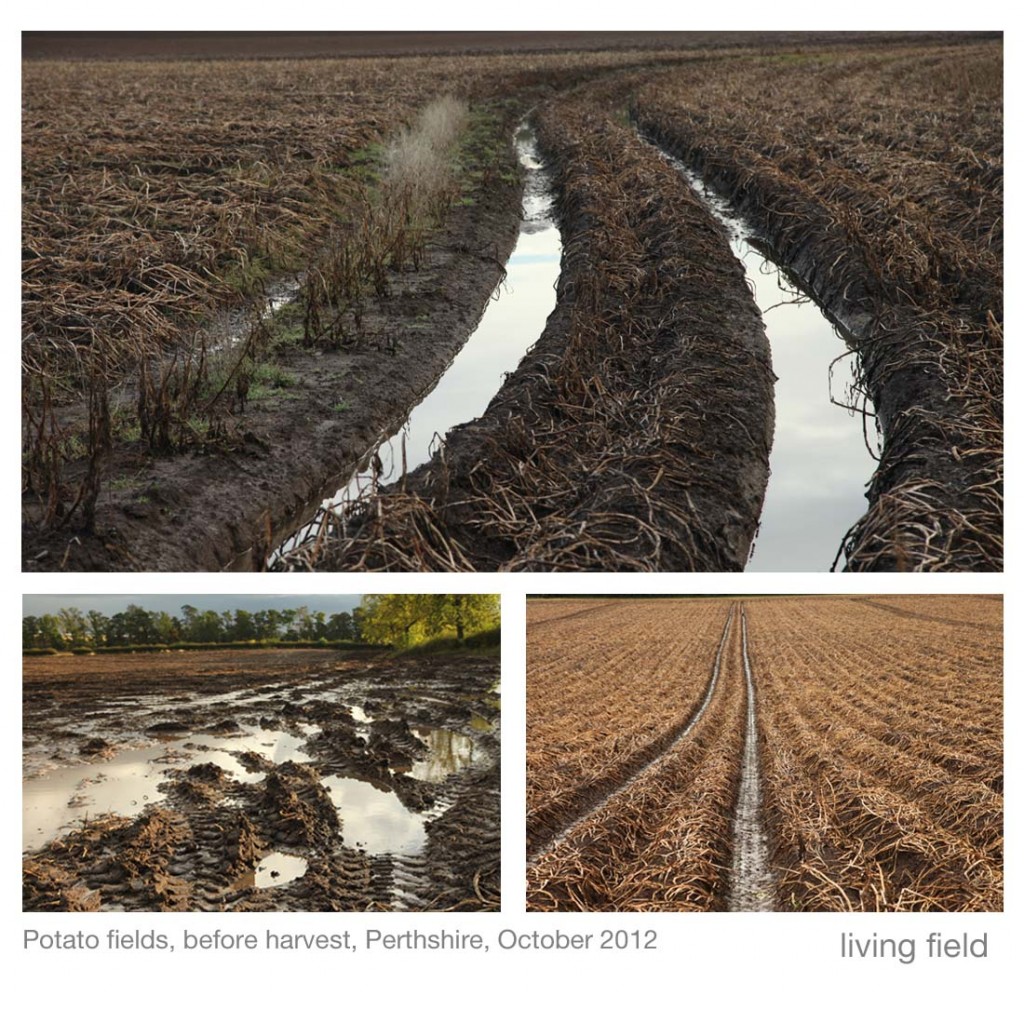 This occasional transport in water must happen for many seeds of the croplands. It is one method of dispersal around the landscape: seeds get washed away in surface water; they end up being carried away by streams and rivers; then when the rivers flood lower down the catchment, the seeds get deposited as the floodwater recedes.
See also http://www.livingfield.co.uk/5000-plants/crop-weeds/potato/ on the role of tubers and seed as sources of weeds and impurity.

What about the tramlines?

The lines in a crop made by repeated passage of tractor wheels are called tramlines. They did not appear much before the 1970s. There was no need for them. Seed was sown, fertilised a little and maybe treated with a pesticide (though most weren’t) then harvested.  Some fields got hardly any tractor visits after sowing.

As the amount of traffic across a field increased with intensification, to between 10 and 25 traverses per season in some crops, tramlines became a way of cutting down compaction on the field as a whole.   The idea was to leave the most of the field untouched and drive repeatedly over the same tracks.

Yet it only partly worked. At harvest, combines and support vehicles drive all over the place. Look at a field after harvest and it is covered in tracks.  If the field is left in stubble, the criss-cross pattern of tracks is still visible months later. And tramlines may not be in the same place year after year.

Tramlines have their negatives – water flows down them  taking soil and chemicals with it. In fact, most losses from fields occur down tramlines.

Yet after all that water, and the difficulties of harvest and sowing in autumn 2012, the year ended with clear skies and a resplendent sunset. Here it is over farmland in Strathmore, still flooded, in the last light of 2012. 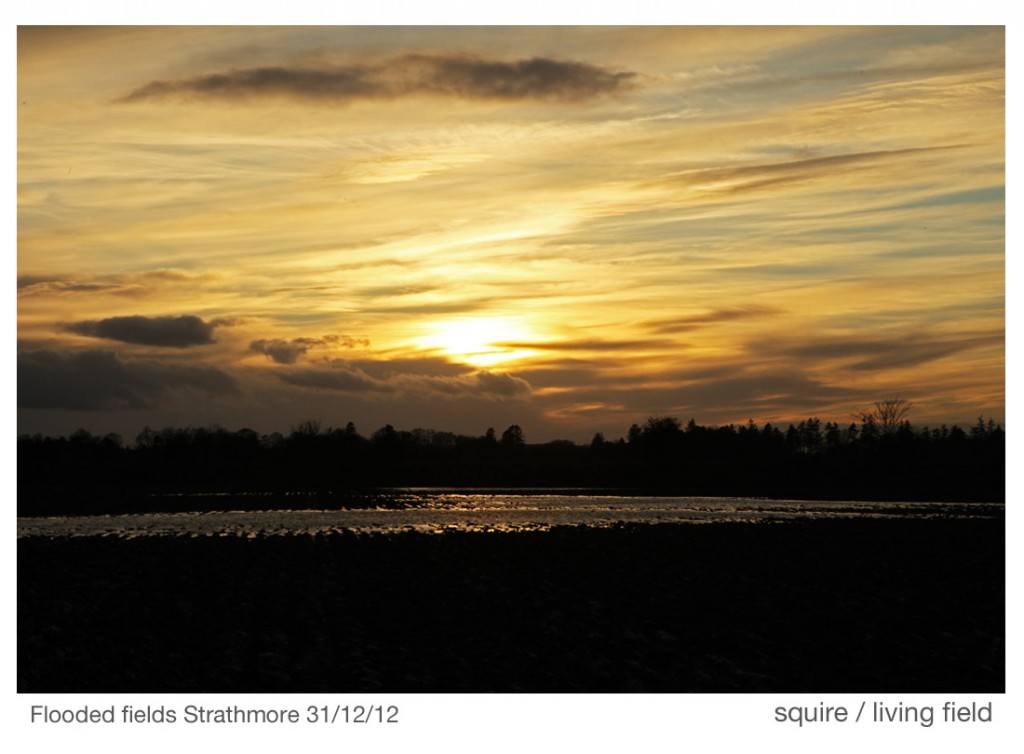 And what about those abnormal happenings reported at the height of the deluge – strange beasts appearing in the floodwater … traces in the mud. Did you see anything ….. ?