Thoughts on a visit to the exhibition Roman Empire – Power and People McManus Dundee, on 14 March 2015.

This fine, informative display gave evidence of the Roman presence north of the Antonine Wall (between Forth and Clyde) around 2000 years ago. They set up marching camps and lines of communication, patrolled a long and complicated frontier, built great fortresses, then retreated. Yet few things remain to tell of their everyday life.

One was scale armour, known as lorica squamata [1], fragments found at the site of the fort at Carpow, near the junction of the rivers Tay and Earn in Perthshire. These small samples, linen cloth as backing, sown with 1-2 cm wide sheet-bronze scales, are stated to be the best preserved of this type of army gear in north-west Roman europe. They are rare intact because the linen cloth usually rots and disappears. Someone might have worn this armour to help protect them from a thrown stone or spear or a body blow from wood or metal. It is not known whether the fibre plant flax Linum usitatissimum used to make the linen was grown locally or even whether the cloth was made here [2]. There was a trade in linen throughout the empire.

Another was an amphora (a clay pot), reconstructed from pieces found at Carlungie, Angus, lying in one of the dwellings adjoining an earth-house or souterrain, used as an underground storage chamber. Amphora such as this were used to move wine, oil and other essentials round the empire. A note by the exhibit told the amphora was from Gaul (France) and contained French wine. Who brought it here is not known, but you can imagine the party.

Forts and fortresses along the northern frontier

These exhibits were some of the few fragments remaining in this area from the massive resourcing of the empire’s northern frontier. The Romans made Britain a province in 43 AD and by the 70s AD had established fortified lines and supply routes through (what are now) Perthshire, Angus, Aberdeenshire and Moray. They patrolled well north of the Antonine Wall, which itself is more than an hour’s car-drive north of Hadrian’s Wall in northern England.

They built and manned forts close to transport routes by land and water from the south and east, as at Carpow, and camps and signal towers along the Gask line that ran north of Stirling and continued north east along fertile Strathmore as far as the east coast near Stracathro, and from there, dog-legging north and north west across Aberdeenshire to Moray. A long way to march. A long way from home.

Surprising is the size of some of the garrisons. The one at Carpow, close to the Tay estuary and not far from the North Sea, and thought to be occupied between 180 and 220, was designed to hold 2000-3000 people. The massive base at Inchtuthil – a legionary fortress – by the Tay river west of Meigle (image above), commanded the way north from Perth and was estimated from its dimensions and excavated buildings to house 20,000 to 50,000. A small town! To do its job today, it would need to be sited a few miles farther west to command the A9 and railway from Perth to Inverness.

Roman Inchtuthil existed only for a few years in the AD 80s before it was purposely abandoned. Even if not fully occupied, these garrisons must have held thousands to tens of thousands of people, many of whom were soldiers with big appetites.

How to feed thousands of soldiers

They all had to be fed. They would have brought and tended some of their own livestock and perhaps grown some crops and vegetables nearby, but the staple food would have been grain – wheat, barley or oat. (There was no maize, potato or turnips then.) Just think how many packets of porridge oats would be needed to feed all those men every morning [3], and that grain would have had to be transported over long distances from the south or else stolen or coerced as tribute, or tax, from local people.

The SCRAN entry states: “The Roman army was adept at self-sufficiency. At Inchtuthil the legionaries exploited local resources of wood, stone, gravel, and clay to build their fortress. They manufactured their own lime, bricks, and pottery on the spot. Food and other raw materials such as leather would have been obtained from the natives, probably in the form of tax. The massive granaries at Inchtuthil hint at the scale of such levies.” And these granaries, or grain stores, were big, as shown by the diagrams and aerial images made during archaeological digs (online references below).

The exhibition says that when the Romans came the area was populated by farming communities of native tribes, scattered and based around fortified hill tops. This was the late Iron Age, so agriculture would have been widespread, but even so it would have been very hard pressed to support tens of thousands of soldiers in addition to the existing people. Imagine working hard all year to grow crops and then when they were harvested, you had to give away a lot of the grain for the privilege of having the Romans living nearby. The invaders can’t have been popular and presumably that is why they had to build these lines of communication and massive fortresses.

The Romans did not stay long. They arrived (in what is now Scotland) in the 70s (AD), which is about one thousand nine hundred and fifty years ago, but they were gone in less than 150 years. Their leaving is said to be the result of things happening elsewhere in the empire. Rome was too stretched – but (you have to ask) – was it the midge!

The iron age skills of growing crops and tending stock continued to the present time. So did working hard all year and giving away the harvest to those wealthier or more powerful. The Romans had no monopoly on oppression. It became endemic to northern agriculture.

[1] Squamata is the scientific name now given to reptiles that have scaly skin, the lizards and snakes.

[2] Flax is one of the oldest fibres plants, grown in Britain for several thousand years, see the Living Field’s page on Fibres.

[3] A packet of porridge oats weighing one kilogram contains 25 servings. To make 1000 servings would take 40 packets, and 10,000 servings 400 packets; and that would be just for one breakfast.

Introduction including material for schools

See also links to SCRAN for Carpow and Gask Frontier from the above pages.

Hoffmann, B. 2013.The Roman invasion of Britain – archaeology versus history. Pen and Sword Archaeology, Barnsley, UK. 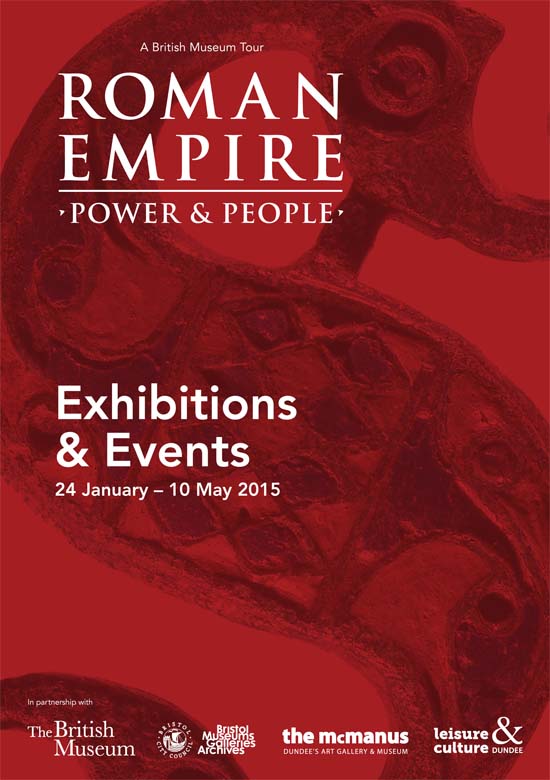 On at the McManus Gallery & Museum until 10 May 2015, an exhibition of antiquities, from the British Museum and local collections. See the earthenware pot (amphora) found near an Angus earth-house, said to have held French wine,  and the linen-backed, bronze scale armour from Carpow where Tay and Earn meet. Web link: Roman Empire: Power and People – a British Museum Tour.