Some of the toughest and most widely used plant fibres run vertically in the stem, as bast surrounding and protecting the phloem cells (the ones that transport ‘food’) or as strands giving both strength and flexibility to the stem. Among this type are jute, hemp, nettle and flax. In contrast, cotton – the fibre most widely grown and used in the world today – and also kapok, come from a protective covering around the plant’s seeds.

On this page are some notes and images of plant and animal natural fibres. Links to other 5000 Years – Fibres pages:

Cotton Gossypium species, mainly G. hirsute and G. barbadense, but also G. arboretum, is grown in many warm regions of the world including the Mediterranean, Africa, Asia and north America, and makes up by far the largest volume of manufactured plant fibres today. The plants produce cotton fibres as protection around the seeds and to aid dispersal. The fibre is mostly cellulose and best for fine fabrics rather than rope or cord. Large cotton-processing industries based on imported material developed in parts of Britain, notably in north-west England and central and south Scotland. Apart from sheets and cloth we know as ‘cotton’, the material also goes to make fabrics with the names calico, denim, muslin, gauze and cheesecloth.

Most cotton is grown with very high inputs of pesticide and fertiliser. In contrast, the images higher up the page were taken at Bagan, Burma, in an intercrop of cotton and pigeon pea. The cotton plants were more than two metres tall and only sparsely populated with white  cotton ‘bolls’. The way they were grown – you could appreciate the plant … and the cultivator.

Jute Corchorus capsularis and Corchorus olitorius has not been grown commercially here, but jute fibre imported from India took over from flax in the 1800s as the raw material for major industries based in and around Dundee. It is used in many products, now second in global volume to cotton, such as a backing for carpet and linoleum, as rope and cord, and as cloth with a range of applications. Hessian is a name commonly given to coarse jute cloth.

Flax Linum usitatissimum is an ancient crop, grown in many parts of the world. It has been the most widely cultivated of the fibre plants in Britain. The crop varieties are distinct from several Linum species native to Britain – the tall, unbranched varieties are grown for fibre, while shorter, branched ones yield seeds from which linseed-oil is extracted.

Nettle Urtica dioica has been (and still is) harvested from the wild and cultivated as a source of fibre throughout its range in North America, Europe and Asia. It is the one fibre plant in our region that has been grown and harvested since early settlement for domestic and local use. It is relatively easy to extract and spin and can be dyed and woven to make cloth and felt, in some cases of high quality, not at all prickly. Nettle is also the source of a green dye.

Hemp Cannabis sativa is another species with a global distribution, grown widely for craft and commercial uses throughout much of Europe and Asia. It is not thought to be a native of Britain but has turned up widely at prehistoric sites here. The fibre and the narcotic are different varieties of the same species. As a fibre, it is used to make a range of cloth, sacking and rope.

Agave Several species of this plant produce fibres, but of different type. The coarse fibre used to make sisal rope and twine is extracted from the long, tough but fleshy, leaf blades of Agave sisalana grown in various tropical countries. Sisal is used in floorcoverings and as coarse twine and string, including at one time baler twine for securing bales of straw or hay, until sisal was largely replaced by plastic. Another species of Agave, growing in the dry land in the east of Morocco produces a much finer fibre, extracted and woven into a soft cloth, sometimes known locally as ‘cactus silk’. 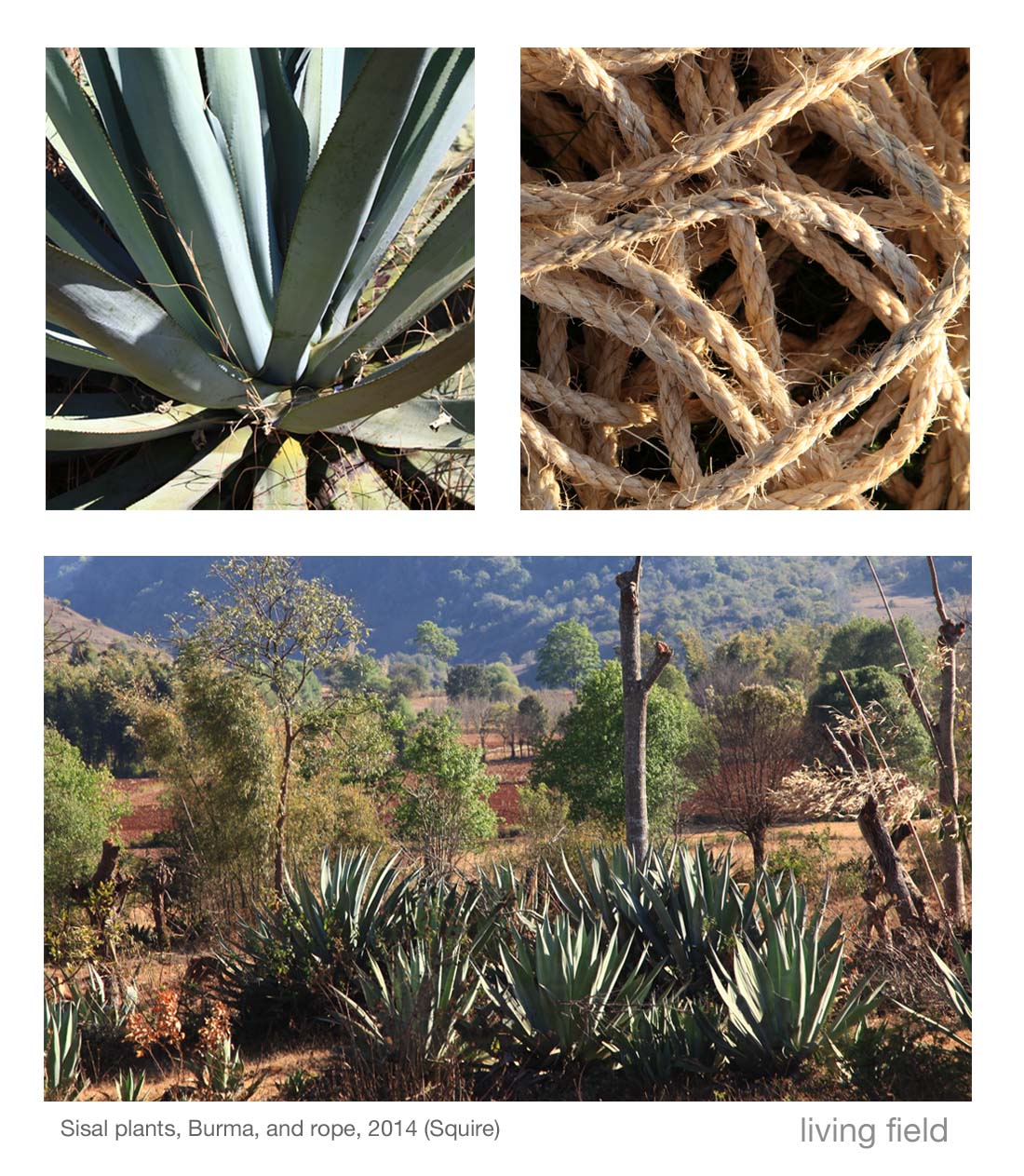 Coconut Cocos nucifera produces a mass of fibre called coir as a protection around the coconut. Coconut may take the accolade of the world’s most useful plant for the range of products that it yields. Coir is still used widely in manufactured floorcoverings.

Kapok Ceiba pentandra yields the soft material of the same name that once went into mattresses and pillows. Like cotton, kapok comes from the seed-head, not from stems. With cotton, it is one of the mallow family. And yet kapok is a different plant from cotton in growing into a tall tree with thick trunks and straggly branches. Red flowers are born while the tree is mostly leafless. The flowers drop and each fruit extends into a green pod, which when mature and dark brown splits to reveal the cottony material inside.

Lotus Nelumbo nucifera is one of the most unusual fibre plants, a water plant of Asia ranging from India to Vietnam. The fibre forms in the stems that extend from the muddy bottom of a lake or pond to raise the leaves above the surface of the water. (A species not to be confused with the legume family Lotus.) The fibres are extracted and then spun and woven into a fine and very expensive cloth.  For more on this, see Inle Lake on this site.

Straw from various cereal plants is used as a coarse, whole-stem fibre crop, especially when stems were much longer than they are in today’s varieties. Of plants grown in northern Europe, cereal straw, whole straw rather than extracted fibres, mainly from oat Avena sativa has been used to make cords, known as simmans in Scotland for securing thatch or lining the roofs of houses (see Fibres in the croplands for more on simmans).

Bamboo and rattan And there are many plants, mostly from the tropics and sub-tropics, whose stems and leaves are tough and durable enough to be used as they are in thatch, panelling and wall covering. The grasses, including bamboo and rattan, and the palms are particularly useful in this way.

Images below show a grove of tall bamboo, a storage area made of bamboo poles, split bambino ‘fencing’, and a thatch (species not identified) and protecting straw from the fields, a set of baskets made from bamboo strips (the tops still to be finished) and an example of the weave on one basket, all in the Shan area of Burma, Februry 2014.

From the plant abaca Musa textilis, grown in south east Asia and certain other tropical climates, come the products named manila, which include rope and strong paper and envelopes.

Silk Leaves of the mulberry tree, mostly the species Morus alba, feed the ‘caterpillars’ or larvae of the silkmoth Bombyx mori, a domesticated insect that does not occur in the wild. The larvae spin cocoons, in which they lie during their transformation to adults. The cocoons consist of fibre that is unravelled to make silk thread.

The unravelling process is the crux – cultivated forms of the moth produce cocoons that are relatively easy to unravel compared to wild species whose cocoon-threads are more tightly cemented together. Silk production is at least 5000 years old in China.

Attempts within the last few hundred years at small-scale silk production in southern England mostly failed because of the difficulty of growing the mulberry as a food source for the cultivated silkworm (see Thirsk for details in ‘Sources’). 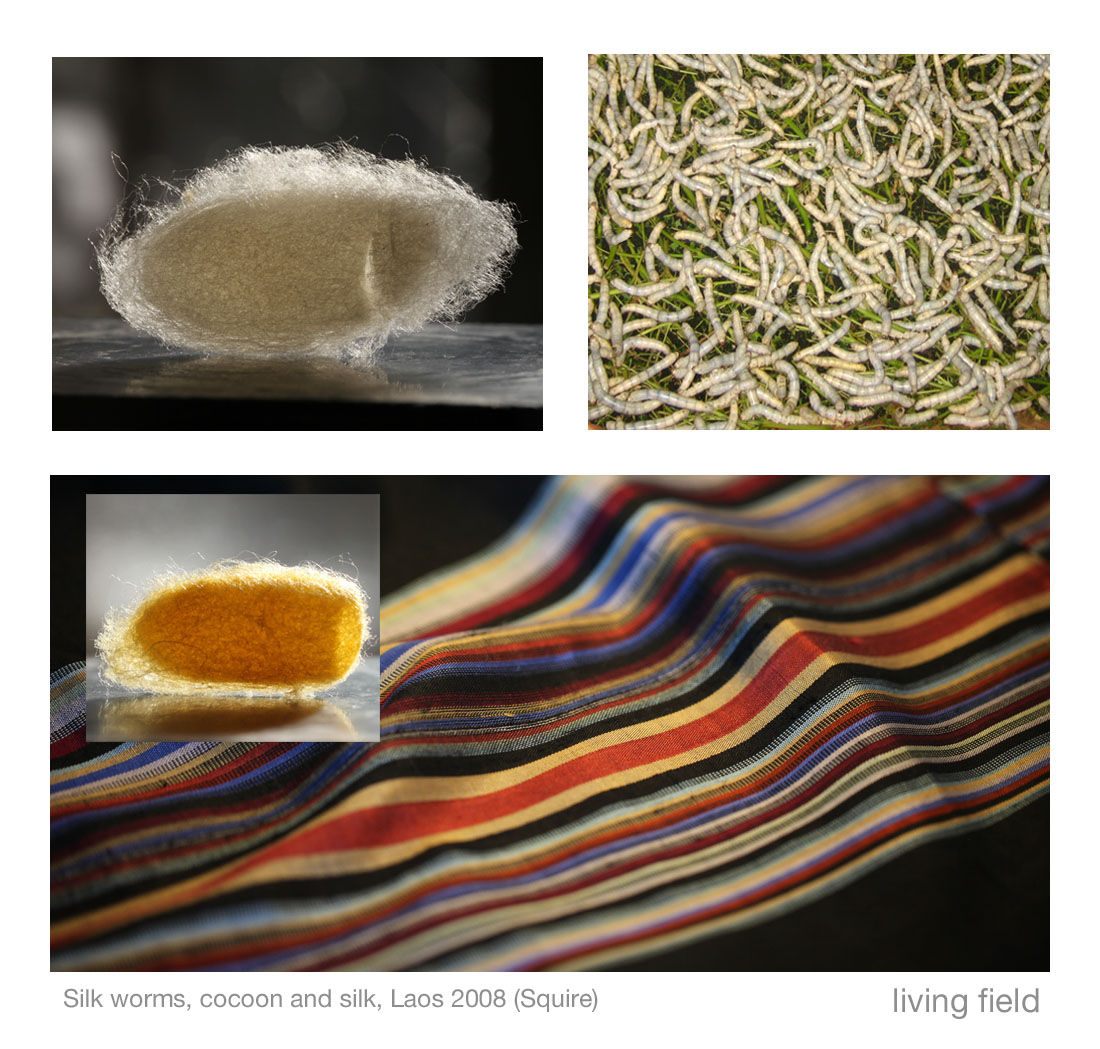 Images above – food web fibres – show the transformation of natural animal fibre into fine cloth: a basket holding silk moth lava being fed on mulberry leaves (top right), a white cocoon showing the threadwork of silk fibres that are spun, dyed and hand-woven to make silk dress fabric (lower) and (inset) another type of cocoon made by a different variety of worm, all from Laos.

Mulberry leaves – silkworms – silk. Compare this with seaweed – sheep – wool at Fibres in the maritime croplands.