Potato as a volunteer weed and impurity. Persistance by tubers left in soil. Persistence over many years by seed. The role of soil dumps as a  feral melting pot.

The potato Solanum tuberosum came much later to Britain than the staple corn and legumes that had fed the people for thousands of years. From the mid-1700s, however, it began to fill a major gap in agricultural production. Being vegetative, and not having to produce seed before harvest, it offered an alternative food that could be left in the soil or stored well into the cold period of the year.

Potato also distinguishes itself as a quirky crop-weed. It is one of the nightshade family that includes deadly nightshade Atropa belladonna, thorn-apple Datura stramonium and henbane Hyoscyamus niger. There are no wild relatives with which it can cross-pollinate in Europe, but it leaves volunteer weeds through both tubers and seed.

Volunteer potato rarely builds up high enough populations to  reduce the yield of other crops directly as a weed, but its persistence after the year of cultivation can allow disease to be transmitted between potato crops and could introduce impurity, in that a potato harvest might contain more than the tubers of the sown potato variety. 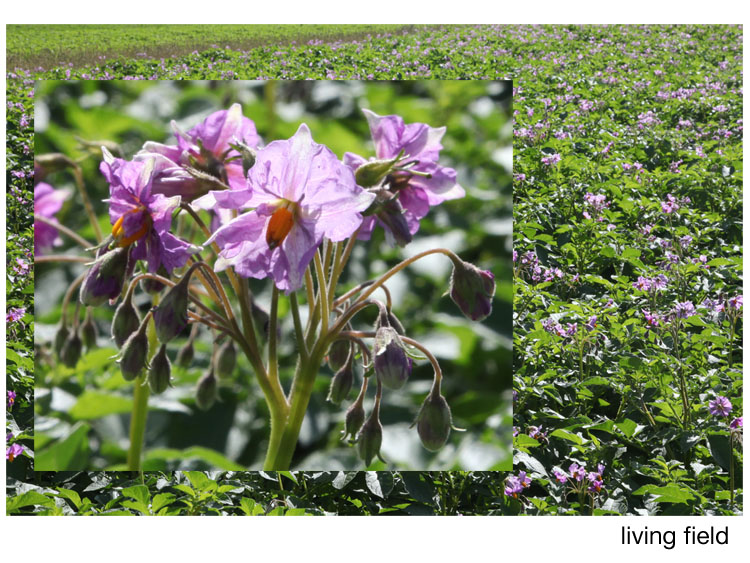 Images above show a field in flower, mid-summer, and (inset) a flowering branch.

Persistence and transmission by tuber

Any gardener who grows potato knows that if small tubers are left in the soil at harvest, they will come up the next spring. So it is in a field. Any tubers left after harvest have a chance to over-winter and emerge. Many emerged plants are too small to be seen in a crop, but occasionally they extend in height to become visible above wheat and barley.

If not controlled along with other weeds, they will themselves produce underground tubers which can continue the cycle.

Sometimes very large numbers of tubers are left at the end of the season. Poor harvesting practice may result in odd-sized or unsaleable tubers being ejected back on to the field. In a very wet year, such as 2012, local flooding may wash out soil, detach tubers from the plant and deposit them elsewhere in the field or even outside the field.

Occasional events such as these can start a population of volunteer potato that lasts for many years.

Images above show a field with wheat near harvest and protruding green potato stems and (lower) two of the volunteers uprooted, showing white new tubers.

Persistence and transmission by seed

Many potato fields flower well before harvest – some flowers have an overall purple-mauve colour, others are mostly white. If time allows, the flowers will produce seed encased within a green ‘berry’.

At harvest, the ‘berry’ falls to the soil, its outer covering withers and the seed inside becomes incorporated.

There have been few scientific studies of the persistence of potato seed in soil, but experience indicates it lasts for several years, perhaps more than ten years. Potato seed is found in the seedbank but much less frequently than oilseed rape.

The images above show the aftermath of severe flooding in autumn 2012: from top left, clockwise, a potato field after the foliage (the haulms) has been killed to make harvesting easier, everything soaked; ‘berries’ scattered on the soil surface; six berries still attached to a dead flowering stem; and several tubers and one green berry washed out of the ridges and carried down the field.

Control of volunteers in fields

Volunteer potato is usually controlled as part of the general broadleaf weed management on a farm. In other crops, emerged plants will usually succumb to tillage or chemical herbicide, but tubers in the soil may be unaffected, and seed will be unaffected.

In the potato crop itself, volunteers from  a previous crop will not be stopped from emerging but will likely be killed when the field is treated with contact herbicide or sulphuric acid to kill the potato haulms (leaf and stem) before harvest. If the volunteers have produced tubers, then, as for the crops, they are unlikely to be affected by this treatment.

While potato volunteers can in principle be controlled in many ways, they nevertheless keep recurring.

The feral environment is brutal. Thin stony soil, pollution, weedkillers, cutting and thrashing. Few crop species can live there. Even oilseed rape rarely spends more than a year to two in one place.

So potato, with its slow growing, ‘soft’ leaf, rarely survives for long by roadsides or waste ground.

One habitat where it can reside is the agricultural ‘soil’ dump.  Potatoes that are not suitable for sale because they are the wrong shape or size are sometimes put back on the field (see above) but may instead be taken off the field and dumped on a piece of ground usually reserved for spoiled crop and soil. Potatoes may be dumped year after year on the same place, forming layers.

The images above show part of a long standing dump for soil and potato tubers. The image lower left shows plants that have sprouted from old tubers and that will grow to maturity if left.

Such soil dumps in agricultural land are a melting pot for feral opportunity: potato, oilseed rape, and cereals all growing together with a range of weeds – a feral botanist’s delight (though they do smell and can be mushy to walk on).