Rice is the staple cereal food of most people who live in the moist tropics and sub-tropics. It was domesticated from wild varieties in tropical east Asia around 10,000 years ago, at about the same time as wheat and barley were domesticated in west Asia and maize in central America.

Rice has been imported to Britain for hundreds of years, mainly for the rich. But it became a global commodity in the 1900s. People living in northern European croplands are probably more familiar with rice than with their local cereal, barley – rice pudding, baked or in tins; rice crispies; curry and rice; packets of rice sold everywhere in supermarkets.

But for those people in the moist tropics, rice is often a way of life: cultivating it, preparing it, cooking it and eating it most days. Rice grows in several forms, the commonest being wetland rice submerged in water, but ‘upland’ rice often growing on hill slopes and deepwater rice extending its stems beneath a rising flood are other forms.

These pages show some examples of rice-growing in the tropics, beginning with wetland rice Bangladesh. 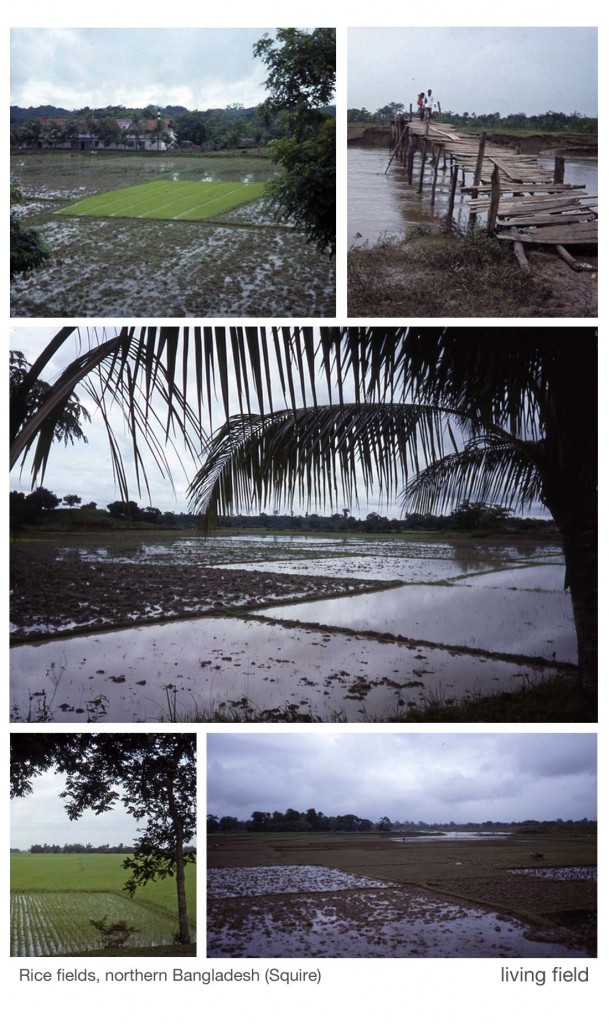 The images above under dark cloudy skies were taken in northern Bangladesh (scanned from 35 mm slides). The central shows the geometric pattern of land separated into squares by bunds made of soil; the land is being cultivated ready for planting; the fronds are of coconut palms lining the track. The green rectangle at top left is a rice nursery. The rickety footbridge connects two banks of a river. The green fields lower left are newly planted rice. Rice fields in preparation on an extensive floodplain are shown lower right.

In the season, it rains so much here – it’s like the winter just past.

For now, here are some images of rice fields from different parts of the world.